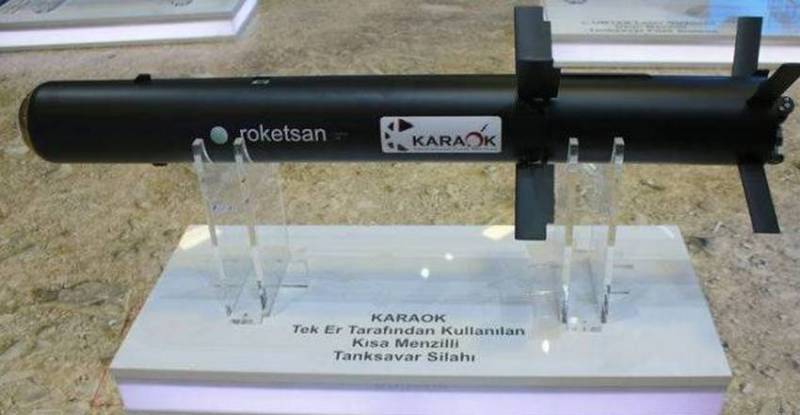 Turkey has completed the creation of a new lightweight portable anti-tank missile system called "Karaok" (Black Arrow). According to Defense Turk, the entry of ATGMs into service with the Turkish army is planned by the end of this year.


According to the developers from the Roketsan company, the new complex with the Karaok anti-tank missile is capable of hitting a target at a distance of 2,5 km (previously reported a range of 1 km). The rocket itself, equipped with an Aselsan infrared seeker, has a tandem warhead and a hybrid two-stage engine. The design allows starting from an enclosed space.

The mass of a single-use ATGM (container with a rocket of 125 mm caliber) is 16 kg, length is 110 cm. The fire-and-forget complex allows hitting targets both along the line of sight and from above.

The Turkish company Roketsan announced the creation of the latest promising lightweight portable short-range anti-tank missile system back in 2018. The development of a light ATGM was commissioned by the Turkish Ministry of Defense. It is assumed that this anti-tank complex was created primarily in the interests of the Turkish special operations forces.

It is specified that a thermal imaging seeker of the Imaging Infrared (IIR) type is installed on the rocket in combination with an inertial unit, the target can be locked by the rocket both before and after launch.