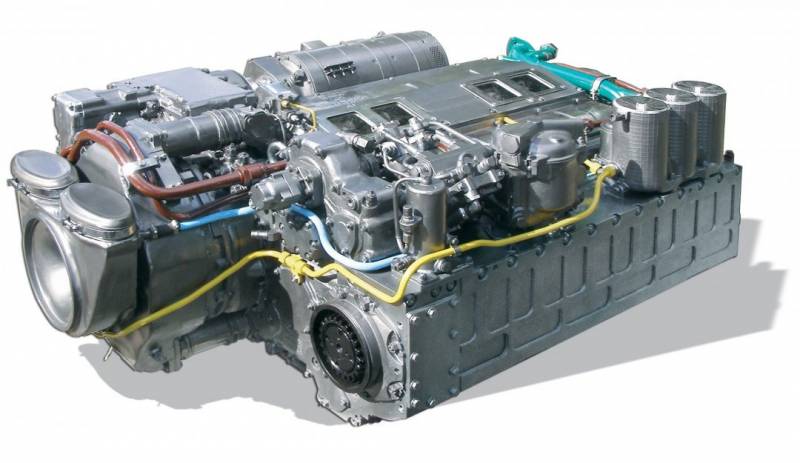 As you know, domestic tank engine building was based on three key designs - V-2, 5TDF and GTD-1000. Most notably, all the engines came to the tank engine-transmission compartment from aviation... Specialists from the Central Institute of Aviation Motors (TsIAM) took a direct part in the development of V-2 and 5TDF diesel engines. It so happened in the pre-war period that the first high-speed diesel engines AN-1 and AD-1 were developed for aircraft. By the way, the cylinder block of the V-2 V-XNUMX was cast from an aluminum alloy. This greetings from the aviators cost the domestic industry dearly during the war years. Especially against the background of a chronic lack of aluminum. 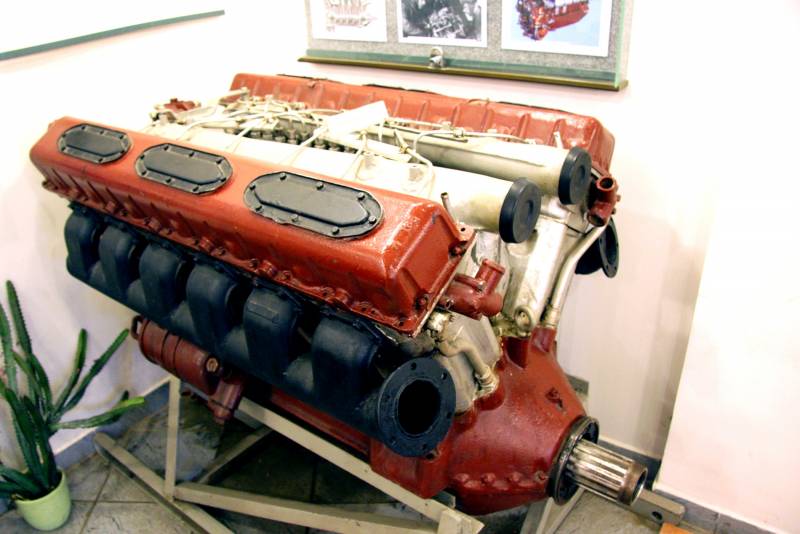 Diesel V-2, the predecessor of 5TDF. Source: vitalykuzmin.net
The gas turbine GTD-1000T for the T-80 family also does not hide its aviation past. The power plant for the tank was developed at the Klimov aviation design bureau based on a helicopter engine.

It should be noted that all tank engines were unprecedented for the domestic and world industry. With the legendary and first of its kind B-2 diesel engine, Soviet tanks went through the entire war and took Berlin by storm. No matter how much spiteful critics say that the Germans could create their own diesel engine for the "cat family", but simply did not consider it necessary, the V-2 really qualitatively increased the performance characteristics of both the T-34 and the KV / IS family.

Another thing is that the motor was not always assembled with high quality for quite objective reasons - the evacuation of specialized enterprises and low-skilled labor resources. V-2 in various modifications is still working both in the civilian and military fields. Suffice it to recall the quite modern T-90 tank, equipped with a modernized V-2 under the name V-92S2. If we compare it with the first prototype of the BD-2 tank diesel engine, built in Kharkov in the early 30s, then the basic parameters of the descendant have not changed. The dimensions of the cylinders and pistons remained the same, as well as the working volume of 38,17 liters.

In almost ninety years, power has grown from 400 liters. from. up to 1000 liters. from. (due to turbocharging and an increase in revs), the specific fuel consumption and the dimensions of the engine have decreased. Moreover, the average life cycle of an internal combustion engine usually does not exceed 25 years. And there is complete confidence that the descendants of the B-2 will celebrate the 100th anniversary in the tank units of the Russian army.

The most interesting thing is that the V-2 owes such a long life to the innovative Kharkov tank diesel 5TDF for its time.

Requirements for the "suitcase"

5TDF is a real box with secrets. In a diesel engine, the aircraft engine operator from CIAM, A.D. Charomsky, has combined a lot of innovations with one goal - to achieve the highest power density in the world. At the same time, it was very desirable to get a motor that is very similar in size to a suitcase. So that you can "put" it on the bottom of the engine compartment, and install the cooling system on top. This, in turn, made it possible to build a tank with a low silhouette. It was then that the "Object 432", the future T-64, was being developed. All of this required an extremely high packing density of all units.

As the chief designer of the Kharkov Design Bureau A.A.Morozov liked to say to his subordinates:

"Remember, carrying armored air is very expensive."
What did the engineers ultimately choose to create such a controversial engine?

First of all, a scheme with two crankshafts and horizontally located cylinders, in which the pistons move in different directions. That is, either towards each other, or from each other. Naturally, since there are two pistons in one cylinder at once, then where to get the place for the valves? Of course, this problem can be solved in principle, but will invariably lead to an increase in the mass and dimensions of the power plant. Therefore, it was decided to stop at a two-stroke cycle with direct-flow slot blowing. This made it possible to achieve the much-needed high liter capacity.

Initially, the 5TD five-cylinder diesel engine developed 600 hp. with., later it was dispersed to 700 liters. from. in the serial version 5TDF. Similar parameters were given by the B-2 variants, but with 12 cylinders, a greater mass and a working volume of 38,17 liters versus 13,6 liters for 5TDF. These are outstanding indicators even now, but for 1955, when the technical project of the Kharkov motor was approved, it was just fantastic. 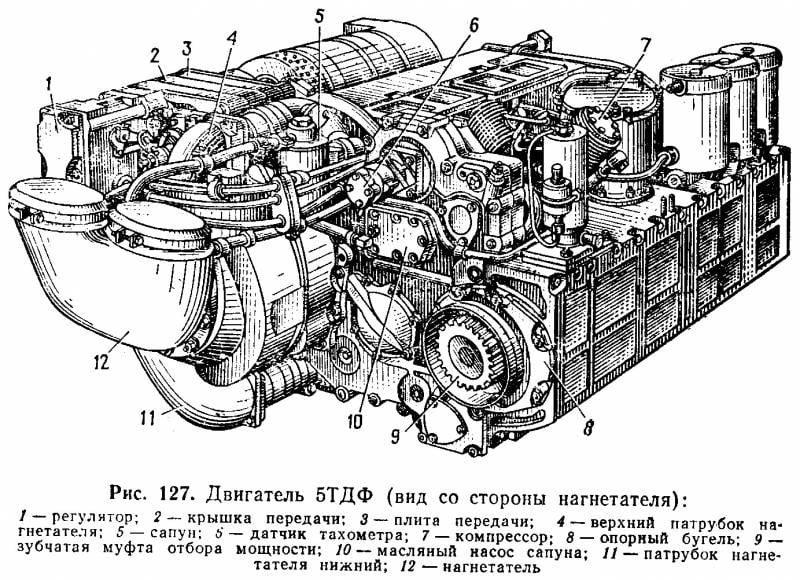 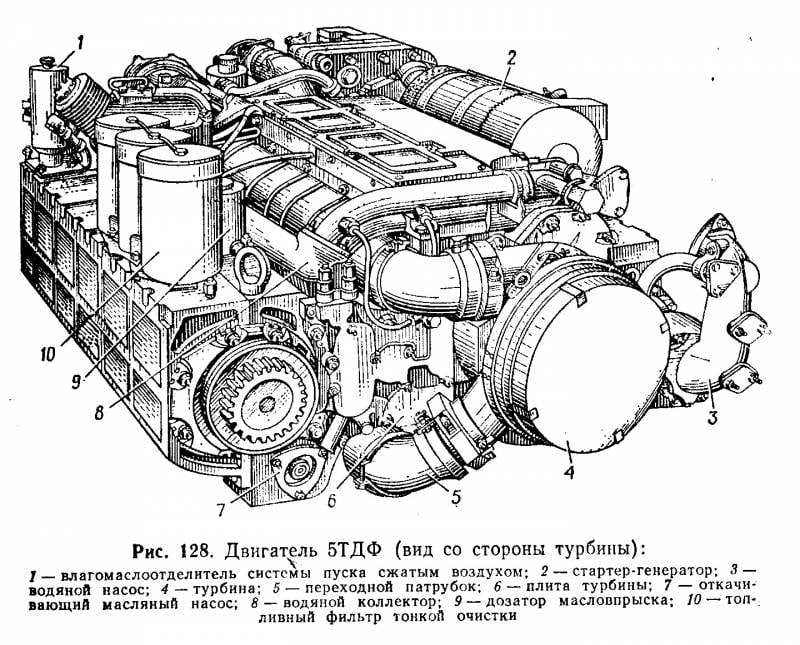 5TDF. Source: armor.kiev.ua
The collection of new products of the Kharkov motor also includes a high-temperature cooling system, in which antifreeze worked at 115 degrees.

On the one hand, this increased the efficiency of combustion of the fuel mixture in the cylinders - there were less unburned hydrocarbons on the working surfaces. Also, the "hot motor" made it possible to pay less attention to the ambient temperature. A serviceable motor could work normally at 55 degrees - the ejection cooling system did quite well.

On the other hand, the 5TDF cylinder-piston group operated in very severe temperature conditions, which could not but affect the resource and reliability. High engine power was also achieved due to high pressures of air injection into the cylinders. The engineers opted for an exotic crankshaft and exhaust gas turbine drive system. The result was a hybrid compressor, in which the central shaft spun up to 35 thousand rpm, and the turbine itself up to 22 thousand. At the same time, the motor itself accelerated to a maximum of 3 thousand rpm.

Such frantic rotational speeds required extreme precision in manufacturing and calculations. Recall that it was at the end of the 50s, and domestic engine builders had just finally mastered the production, unlike the simpler V-2.

It is worth interrupting the thread of the narrative for the sake of a story about comparing the serial 5TDF with foreign counterparts.

Yes, the arrangement with two crankshafts and pistons moving towards each other was not unique. In Great Britain, Chieftain tanks were equipped with a Leyland L-60 engine of a similar design, and Rolls-Royce K-430 was mounted on the FV60 tracked armored personnel carrier. This technique fell into the hands of engineers in Kubinka near Moscow in the late 60s and was thoroughly tested.

There was only one goal - to find ways to improve the reliability and manufacturability of the domestic 5TDF in British trophies. By this time, both the military and the engine builders had time to suffer with an innovative in every sense of the design of the motor. 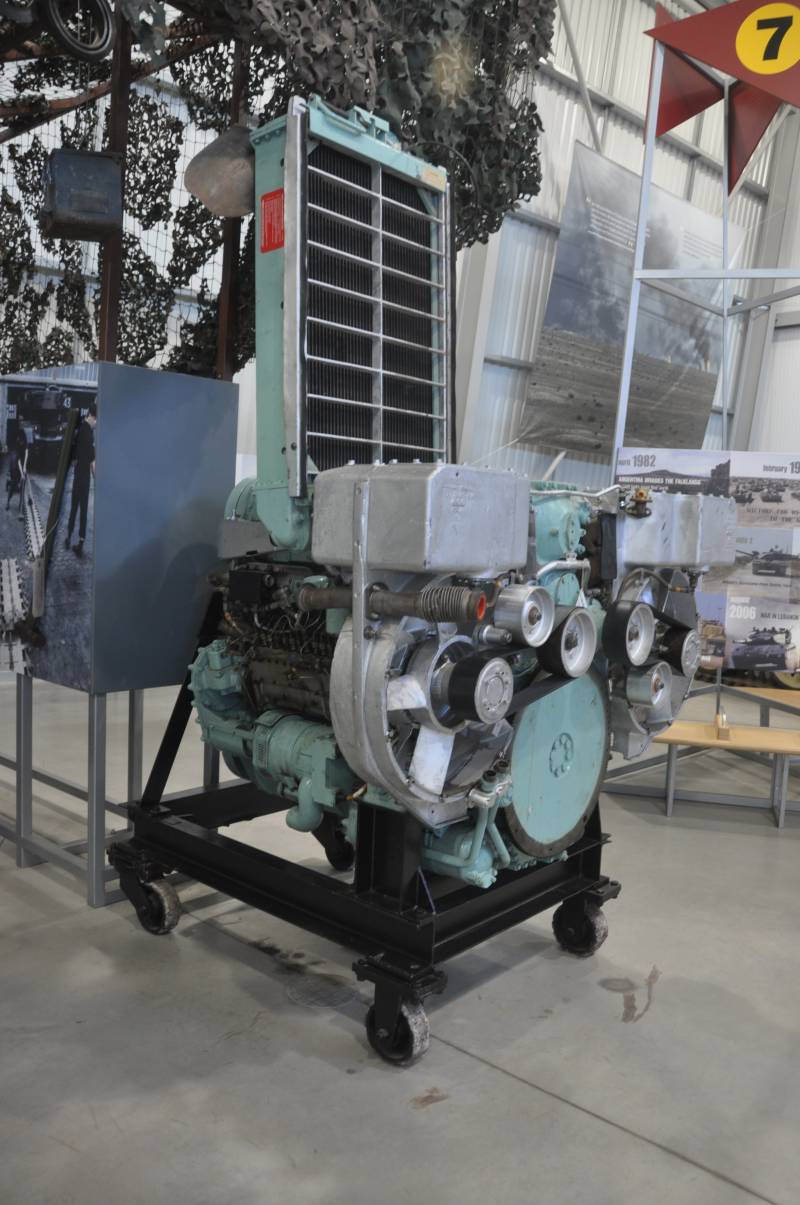 With all due respect to the engineering staff of Charomsky and Morozov, could it have been possible to develop such a complex engine for an industry that had barely recovered from the consequences of total war?

For example, pistons of British engines consist of 15 parts, and in a Kharkov engine, each piston is assembled from 42 parts! In the cylinder liner in the blowing belt (a feature of the two-stroke engine), the L-60 has only 14 "ventilation" windows, the K-60 has 10, and the 5TDF has 136 at once. The foreigners' supercharger drives consisted of only 32 parts. Kharkiv residents supplied the motor with a complex design, consisting of 180 parts. On the one hand, motors from Great Britain showed simplicity and even primitiveness in comparison with 5TDF.

It is flattering to realize that domestic engine builders in the middle of the last century were ahead of the world's leading companies. The Kharkov motor was much more perfect in almost all respects.

On the other hand, the engineers did not fully take into account the production capabilities of the Kharkov plant and, most importantly, they forgot about the realities of operating motors. In combat units, highly qualified driver mechanics were required to work with such complex equipment.

And this became the main problem of the Kharkov motor.

Ctrl Enter
Noticed oshЫbku Highlight text and press. Ctrl + Enter
We are
Is the "old" well forgotten to become the "new"? Part-2. At the call of honor and dutyThe family of two-stroke diesel engines of Soviet armored vehicles
Military Reviewin Yandex News
Military Reviewin Google News
157 comments
Information
Dear reader, to leave comments on the publication, you must sign in.