Send a projectile 100 kilometers. Status and prospects of the ERAMS program 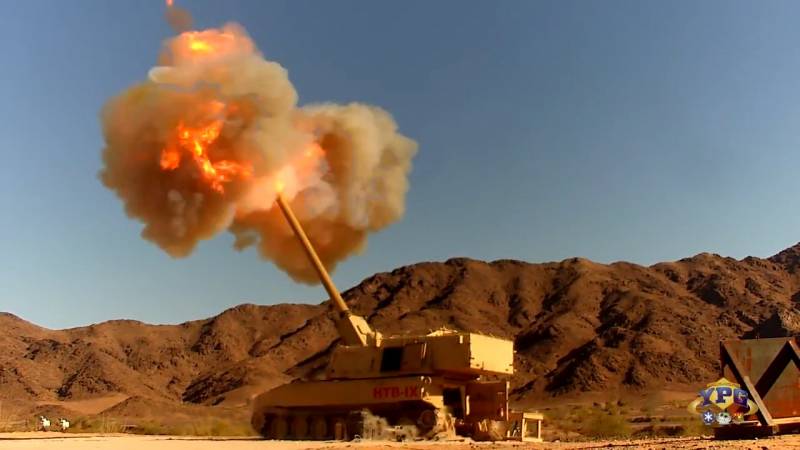 The Pentagon and a number of American enterprises continue work on the ERAMS program, the purpose of which is to create a promising extended-range artillery projectile. By now, part of the research and design work has been completed, and the participants in the next stage of the program will be determined in the near future.

The ERAMS (Extended-Range Artillery Munitions Suite) program started in the recent past and is directly related to a number of other projects for the development of missile forces and artillery. Its goal is to create an artillery projectile in the existing 155 mm caliber with a firing range of at least 100 km. A promising ammunition has already received the designations - XM1155 and Extended-Range Artillery Projectile (ERAP).

In May last year, the Pentagon signed several contracts for preliminary research and design work in the framework of "phase 1". Boeing, General Dynamics, Northrop Grumman and Raytheon joined the program at this stage. They also brought in several subcontractors who were entrusted with the development of individual components and assemblies.

A year ago, the ERAMS program participants made the most daring plans and were going to win the competition. Later, however, the situation changed. Recently, Breaking Defense reported that Raytheon had terminated its participation in the program. The reasons for this decision are not noted. At the same time, Boeing continues to operate. The status of the other two ERAMS members is unknown. 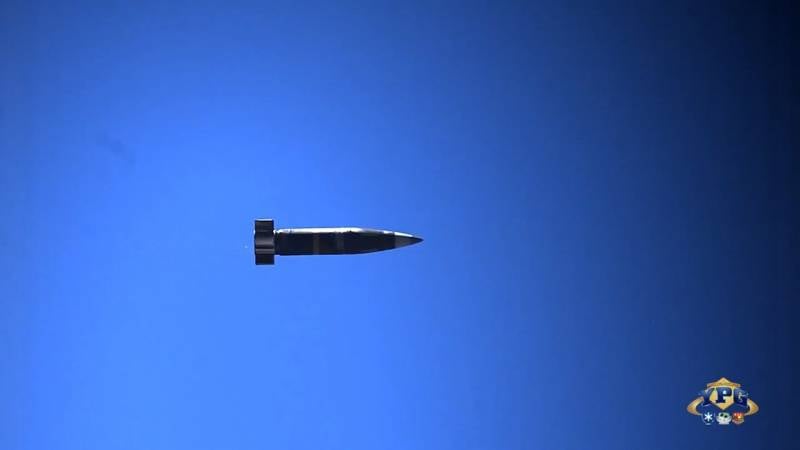 XM1113 projectile in flight. US Army Photos
It is also reported that by now the program participants have completed the necessary work and presented preliminary designs of their XM1155 projectile. Over the next two weeks, the Pentagon will select two of the most successful developments, the development of which will continue in the framework of Phase 2. Which of the program participants are favorites - has not yet been specified.

Currently, the US Army is armed with a wide range of 155-mm howitzer artillery shells with different firing range characteristics. So, ACS M109 with the help of existing active-rocket projectiles can hit a target at ranges of 25-30 km; new ammunition XM1113 is sent 40 km. The promising XM1299 self-propelled gun with a long-barreled gun throws the XM1113 at 70 km.

At the same time, the US Army is in need of a further increase in the characteristics of the range of barreled artillery. Studies have shown that this challenge cannot be solved with individual components and products, and an integrated approach is required. The required characteristics can only be shown by a full-fledged artillery system, which includes a weapon, a projectile and a propellant charge of new types.

The ERAMS program management notes that the general problem of increasing the range can be divided into three components, each of which requires its own solution. The first is an increase in the energy characteristics of the projectile, achieved by increasing the length of the barrel and the volume of the chamber, as well as by increasing the propellant charge. These are the issues that are now being worked out within the ERCA program using two types of experimental weapons. 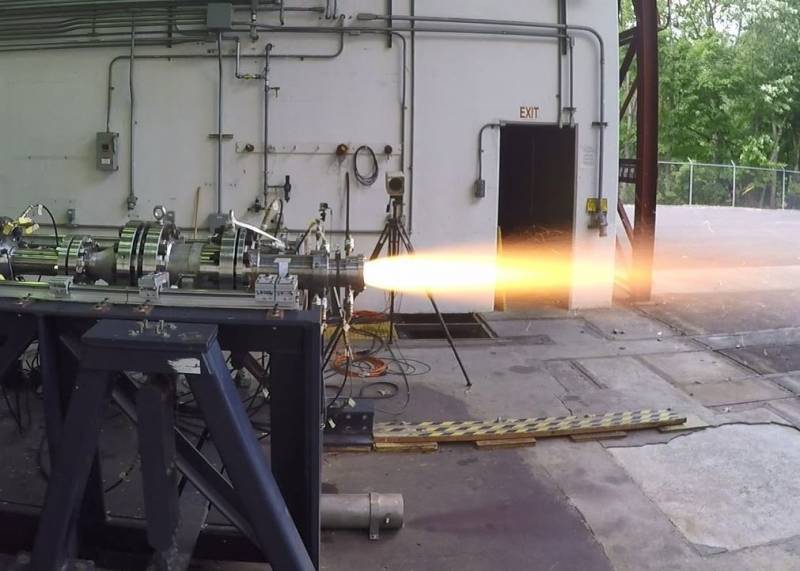 Experienced ramjet engine from Northrop Grumman. Photo Deagel.com
The second direction is to improve the aerodynamics of the projectile so that it can more fully use the energy received. The ERAMS program investigated the use of additional planes that create a lift. The need to create thrust after exiting the barrel was also confirmed. For this, you can use a traditional solid fuel or ramjet engine.

Research and experiments have shown that ramjet engines (ramjet) have the greatest potential in the field of projectiles. Unlike a rocket, it takes an oxidizer from the atmosphere, which makes it possible to obtain a larger supply of direct fuel in the same dimensions and mass. This provides opportunities for increased traction and / or longer run times. In addition, there is no need to solve the problem of the initial acceleration of the projectile. By the time it exits the barrel, it already has the high speed required to launch the ramjet engine.

As part of the research part of the ERAMS program, the optimal appearance and equipment composition of a promising projectile with an increased range was formed. He proposes preserving only certain features of the traditional projectile design while simultaneously introducing solutions borrowed from missile weapons.

It is obvious that the development of such an ammunition that meets all technical and operational requirements is complex. However, it is known about the successful completion of some of the events. Thus, Northrop Grumman and Innoveering independently developed and tested compact ramjet engines at the stand. Now such engines have to be integrated into the design of the projectile. 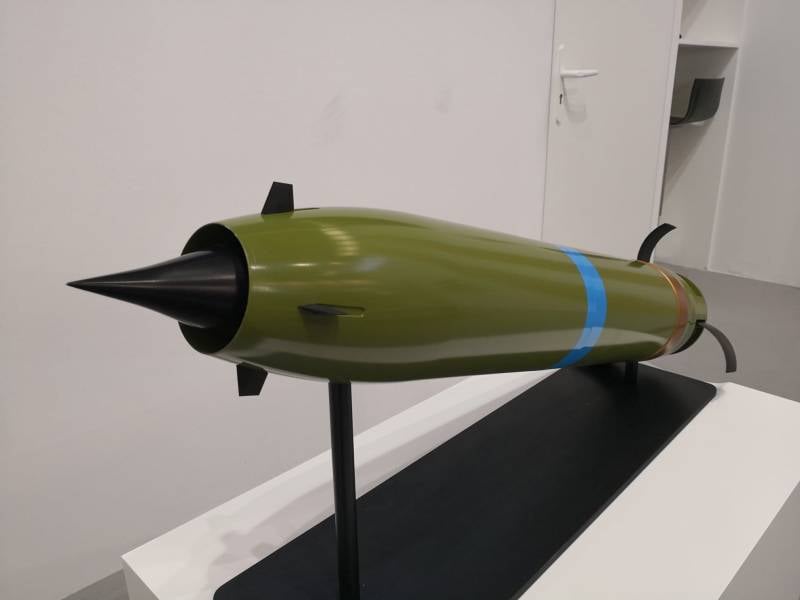 The concept of a projectile with a ramjet engine from the Nammo company. On its basis, a Boeing project is being developed. Nammo Photos
Details on the study of aerodynamics and electronics have not yet been reported. The specificity of artillery suggests that the creation of control systems should not be simple either. However, the last news On the progress of ERAMS, it can be assumed that in these areas there are certain successes, allowing to move on to the next stage of development.

From project to arsenals

As follows from the available data, to date, there are three main participants in the ERAMS program, excluding subcontractors. They have prepared their concepts of the XM1155 ERAP projectile, and in the very near future the Pentagon will select the two most successful proposals for further development. Due to the lack of information, it is not yet possible to predict which companies will receive contracts for the "second phase".

Several more years are allotted for the second competitive stage, determining the best design and bringing it to a series and using it in the troops. Production of XM1155 products is planned to be launched only by 2025. After that, it will take some time to achieve the desired production rate and build up stocks.

By the time a new shell appears, the troops will already have the necessary weapons. So, in 2023, it is planned to adopt a number of missile and artillery systems, among which there will be the first battery of the XM1299 self-propelled guns. At first, these guns will be able to use existing ammunition, including the newest XM1113, and then the promising XM1155 with record performance will arrive in part. 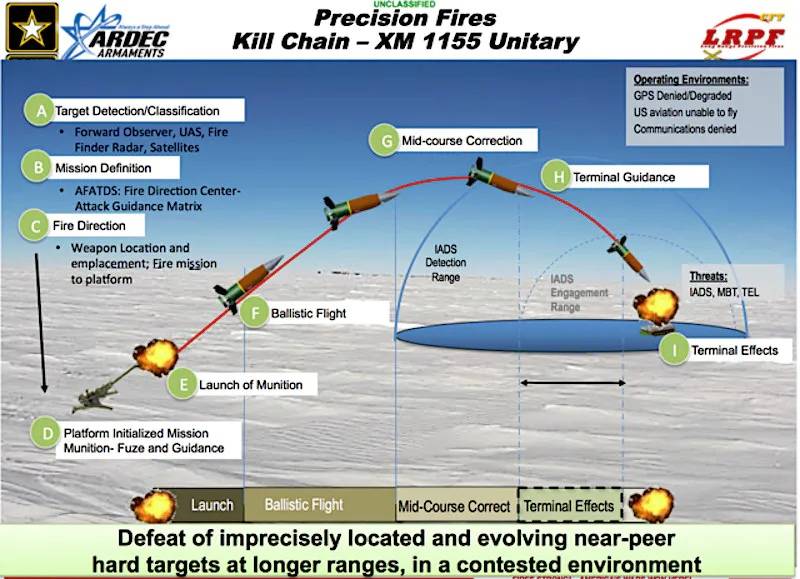 Features of the use of the promising projectile XM1155. TARDEC / US Army graphics
The XM1299 ERCA self-propelled guns are planned to be operated as part of separate artillery battalions with tank divisions. It is at this level that the army will receive new opportunities associated with a significant increase in the firing range. Artillery divisions of tank brigades will also not be left without a new one. weapons... The upgraded M109A7 self-propelled guns and compatible XM1113 projectiles are intended for them.

Thus, the United States continues the largest program of upgrading missile forces and artillery weapons, covering all major areas. A number of promising missile and artillery systems are going to be adopted as early as 2023, thereby increasing the potential of the ground forces. In the meantime, all promising projects are at the stage of development and testing.

At the same time, major decisions are already being made that will affect all further events. So, in the near future, the Pentagon will select the participants in the next stage of the ERAMS program. And the future of American artillery as a key component of ground forces capable of providing superiority over the enemy depends on this choice.