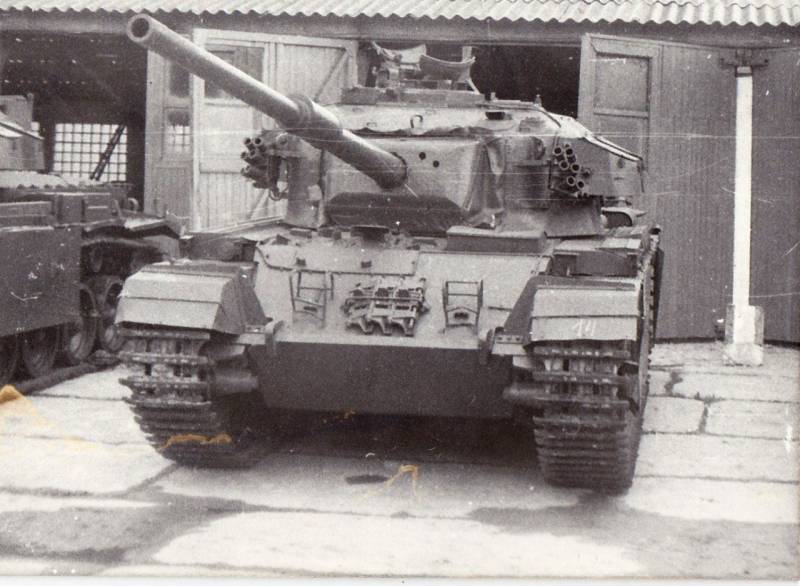 It's hard to hide an awl in a bag. Especially when this awl weighs more than 45 tons and is adopted by 14 states. Such was the British "Centurion", which first came to the USSR in 1952 among the trophies of the Korean War. It was the newest modification of the Mk-3, equipped with an 83,8mm cannon. We must pay tribute, "Centurion" alive to the enemy did not surrender, thoroughly burned out from the inside and lost ammunition. A gift from the North Koreans was sent to Kubinka for visual inspection. As it turned out, alive at tank only the armor, observation devices and partly the engine remained. 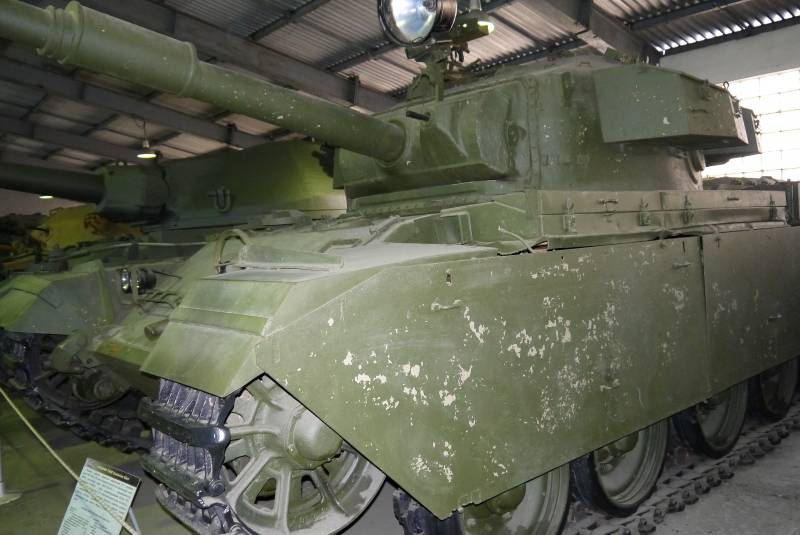 "Centurion" in the modern exposition of the tank museum in Kubinka. Photo by the author
The next time "Centurion" was captured only in 1971.

During the conflict between Israel and Syria, two tanks in good condition were captured by the Syrians and transported to Moscow. These were tanks of the Mk-9 and Mk-10 modifications. Two years later, two more armored vehicles in the performance of Mk-3 and Mk-7, which were modernized in Israel, went to the USSR from the Middle East. By the way, in the same batch, the Syrians sent the American M60A1 tank to the Soviet Union, which also later became an object for study in Kubinka.

There is a slight discrepancy with the information spread on the Internet and data from the "Bulletin of armored vehicles". In 1978, in a secret publication at that time, the material "Armor protection of the British tank" Centurion "was published, which dealt with four machines under the indexes Mk-3, Mk-9, Mk-9A and Mk-10. At the same time, the tank received the name Mk-9A arbitrarily from the authors of the article - military engineers Korolev and Naumik. The fact is that additional 45 mm thick armor was welded onto the upper frontal part of this tank, so it was decided to add the letter "A" as a sign of modernization.

However, where did this second "nine" come from? Didn't they recognize the Mk-7 modification in Kubinka and mistakenly call it the Mk-9A?

This is hard to believe. And, most likely, modern commentators are confusing something in the classification of British tanks. Moreover, the car had as many as 13 versions, sometimes very seriously different from each other.

The study of captured British "Centurions" for the Soviet military industry and science in the 70s was of purely sporting interest. The tanks have already been discontinued and obsolete.

By that time, the British were already armed with "Chiefs", and in the USSR - T-64 and T-72. Nevertheless, Kubinka was very attentive to the study of the tank. The thing is that the Centurions, along with the Soviet T-55 and T-62, were second-line vehicles and often fought with each other in local conflicts. The allies of the USSR fought with the allies of the NATO bloc. And the study of enemy technology could give impetus to the modernization of domestic tanks in third countries. Or pick up the keys to the weak points of the British car.

British tanks did not make much of an impression on Russian engineers. The tank is heavy, the armor is mediocre. And there was nothing to say about weapons. In the very first skirmish, the IS-3, similar in weight, would have butchered its opponent under a nut with a 122 mm gun back in the early fifties.

During the entire life cycle, the British did not change the composition and manufacturing technology of the Centurion armor. Only the thickness varied, naturally increasing from model to model. The Mk-3, Mk-9 and Mk-10 tanks have almost identical armor chemistry. These are medium-hard chromium-nickel-molybdenum steel for the hull and manganese-nickel-molybdenum steel for the cast tower.

Among the features of the technology for the production of tanks, Soviet engineers noted the widespread use of welding. With the high quality of workmanship and accuracy of fitting parts, the British did not cut the edges of the armor plates before welding. And this, as rightly noted in the "Bulletin of armored vehicles", reduces the survivability of armor in case of shell fire.

The tanks that entered the USSR in 1973 and were modernized in Israel were subjected to detonation tests. The Israelis reinforced the bottom of the engine compartment and mounted the power plant from the American M60A1 tank. Engineers do not provide accurate data on the test methodology for the Centurion, but the results say that the Briton had a hard time.

Explosives "Plastit-4" were used for testing, from which, in particular, elongated charges were made to undermine the tracks. The method provided in all cases to bury the charge 8–10 cm into the ground. At least several TNT charges were tested against the Centurions' undercarriage. It turned out that the 7-kilogram landmine not only guaranteed to break the caterpillar, but put two rollers out of action at once. With a fortunate combination of circumstances, the 2,7-kilogram charge was capable of immobilizing the Centurion. On average, to disable the track of a British tank, 10-12% less charge was required than, for example, for the T-72 tank.

The placement of suspension elements outside the hull of the tank turned out to be the weak point of the British suspension. The aforementioned 7-kilogram TNT charge destroyed the attachment of the trolley to the body and bent the axis of the balancer. On the one hand, it was theoretically easy for tankers to repair the suspension - the units were located outside the hull and were quite accessible. On the other hand, only removing the suspension bogie required a 1,1 tonne lifting device. Interestingly, the shock absorbers were not damaged in any series of detonations. As suggested by Soviet engineers, everything happened due to the low efficiency of these suspension elements. 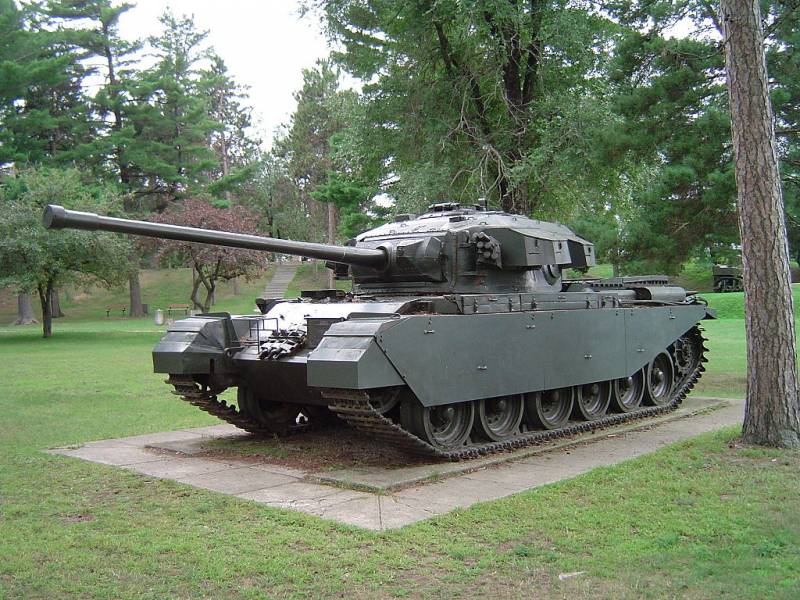 Centurion Mk-3 at the Borden Museum of Canada. Source: ru.wikipedia.org
When, in one of the experiments, a 7,2-kilogram land mine was detonated under the Centurion's track, the bottom of the tank was also hit. The deflection was small - only 2,5 mm. But he could also have a significant traumatic effect on the crew.

When test engineers laid a similar charge under the MTO, the explosion tore the bottom and left a 175-mm deflection. All this happened, despite the efforts of the Israelis in the direction of strengthening the mine resistance of the bottom of the MTO. Yes, and with anti-cumulative screens on the sides of the tank too clever. The mountings were made too flimsy, and when the landmines were detonated, the steel protection elements were scattered for tens of meters around.

Finally, one Mk-10 Centurion was tested for resistance to gamma radiation. The tank was developed during the Second World War and was structurally not adapted to withstand radioactive radiation. The crew had to rely only on the thickness of the armor. It was possible to carry out not only full-scale tests of the British tank, but also to compare it with similar parameters of the American М60А1 and М48А3.

Worst of all in the "Centurion" in a nuclear explosion will have a driver-mechanic - near him gamma radiation is attenuated by only 10 times. For comparison, a tank commander and gunner can count on 80 or even 100 times the absorption of deadly radiation. The results of similar tests of American vehicles showed similar results. 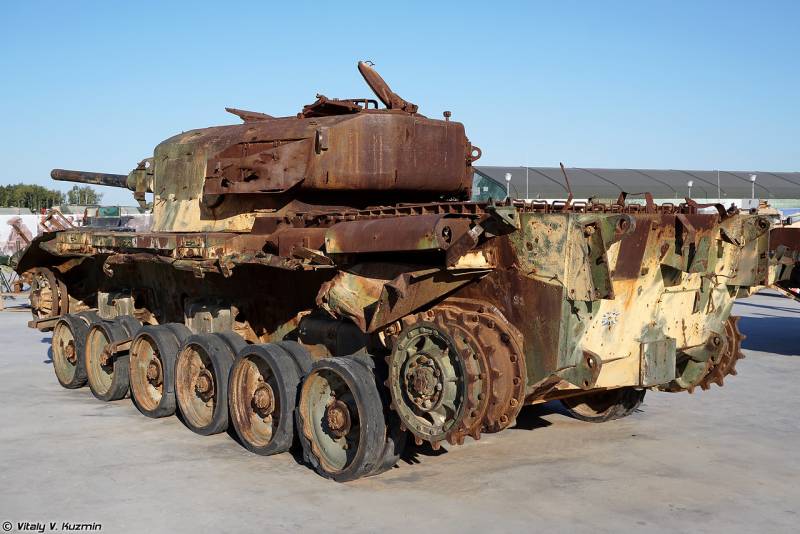 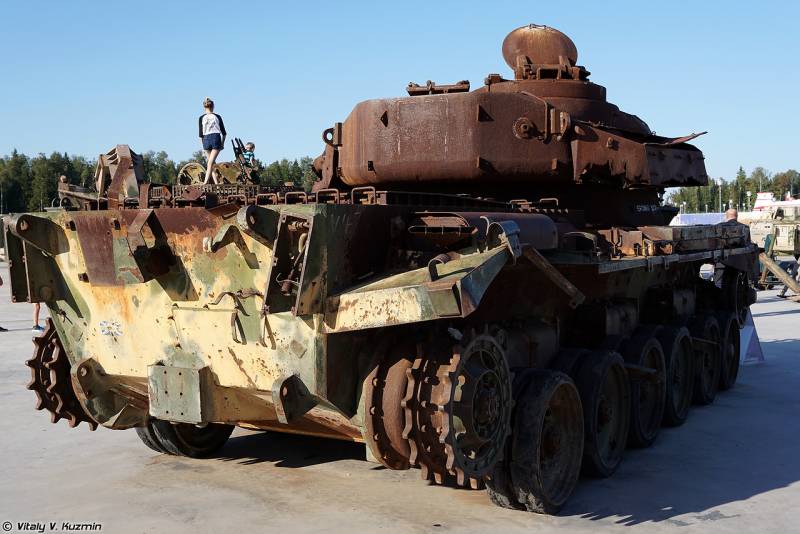 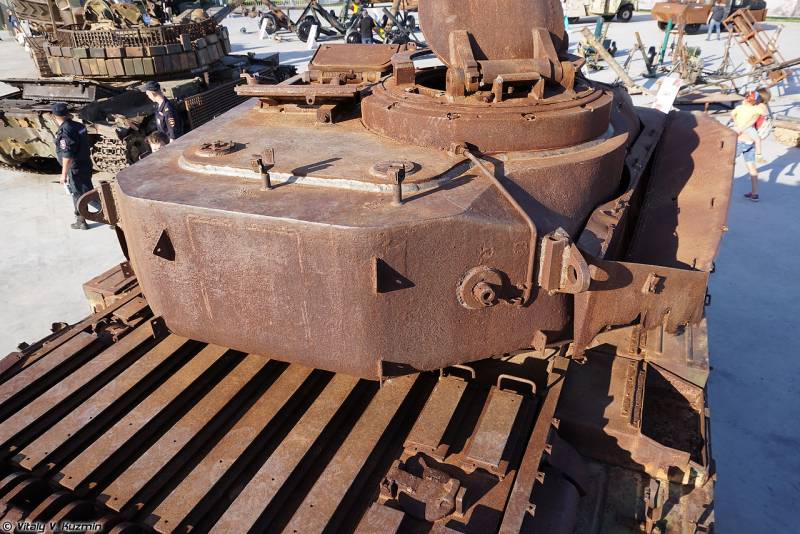 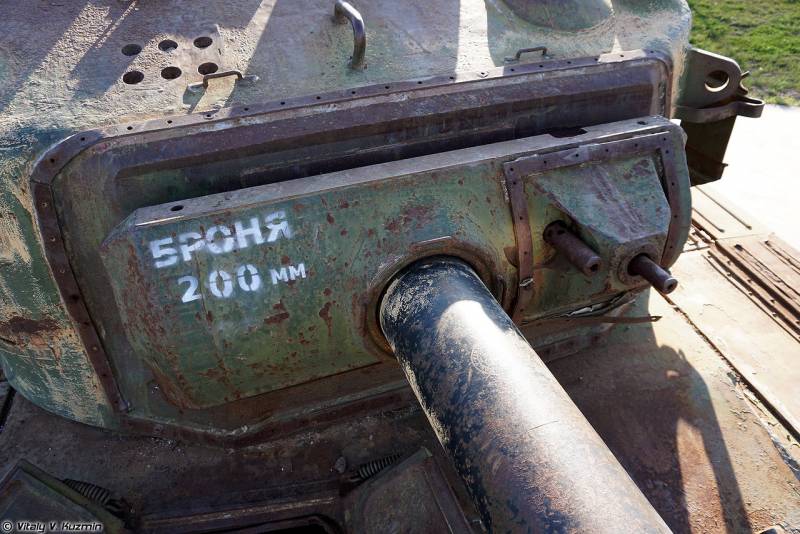 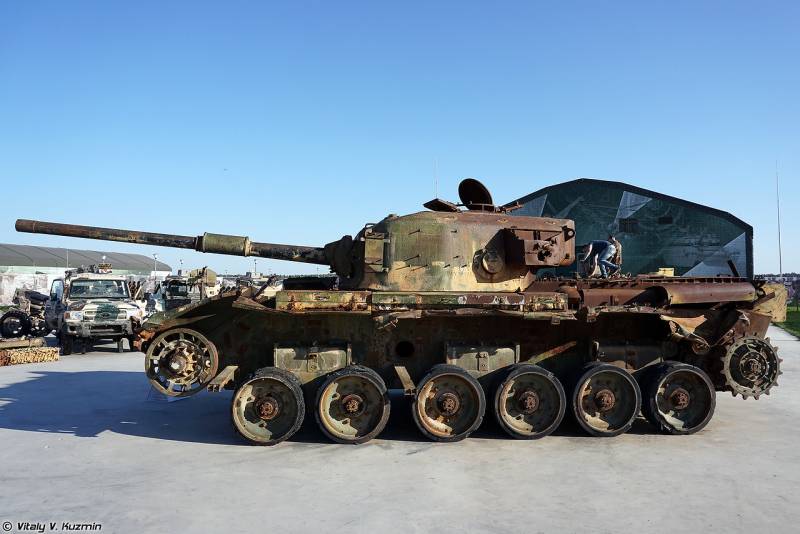 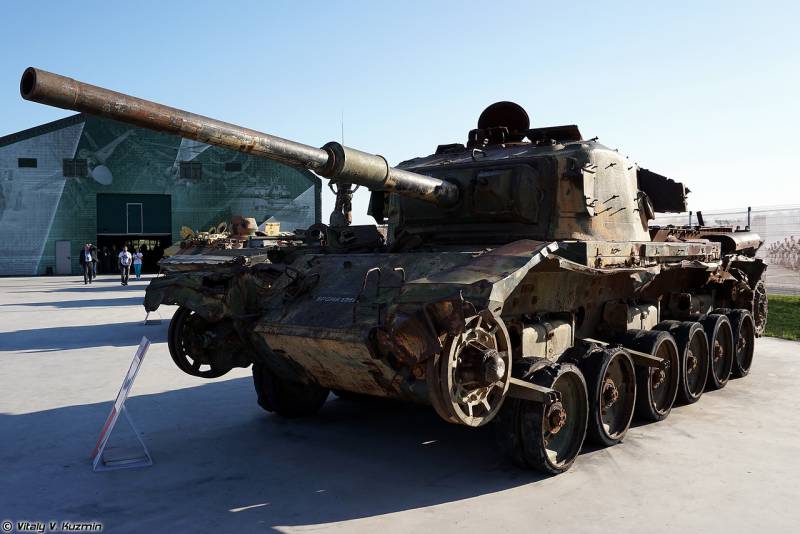 "Army-2018". The last of the "Centurions" that came to Russia. The state is worse than ever. Source: vitalykuzmin.net
As it turned out, the "Centurions" captured in the 50s and 70s were not the last for our country.

In 2018, the remains of a British tank used by Syrian militants were brought to Russia. The tank was most likely one of the trophies of one of the many skirmishes between Syria and Israel in the past.

Ctrl Enter
Noticed oshЫbku Highlight text and press. Ctrl + Enter
We are
The fire control devices of the Soviet and German tanks of the Second World War. Myths and RealityIs the "old" well forgotten to become the "new"? Part-2. At the call of honor and duty
Military Reviewin Yandex News
Military Reviewin Google News
56 comments
Ad