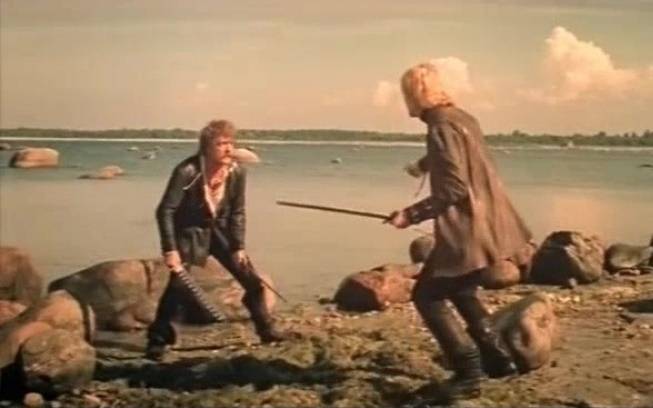 Dick Sheldon fights with swords with Sir Brackley. A still from the 1985 Soviet film "Black Arrow". Nice movie, but a little weird ... Sword and Dick (by the way, he wears it on the right!), And other characters in the movie are worn without a scabbard, inserting a blade into a ring. There is no scabbard and the blade-breaker Sir Brackley, with a naked blade, sits in a chair even in his castle. Moreover, it is known that there were such daggers. But nothing is known about swords ... Archers of the "Black Arrow" wear on their belts ... Mongolian bows, and bows, as it should be for English arrows, in their hands. They simply will not fit into them. And all these minuses, as well as many pluses for historicity in the same film. How can this be - the mind is incomprehensible! Well, that they didn't have enough money for a scabbard?

“Arriving at his house, he took a knife and,
taking his concubine, cut her
by its members into twelve parts
and sent to all the borders of Israel. "
(Judges 19:29)
Museum collections of knightly armor and weapons. The topic of armor and edged weapons of the Tudor era aroused considerable interest among VO readers, and many spoke in favor of continuing the topic, so to speak, "auxiliary edged weapons" such as the dagger dagger. By the way, dag is nothing more than a derivative of the English dagger - "dagger", a word that is just pronounced like "dag". But here we got a little ahead of ourselves. Since it was the "Dagi" who appeared so dear to the hearts of many of our regulars, it was rather late.

But what came before them?

What, shall we say, did they finish off the commoners on the battlefield (what could be taken from them)? And the commoners, the "armed people", how did they finish off the knights, from whom they could not take a ransom according to their rank? And just today we will talk about such a weapon. And again, “our dear effigies” and artifacts from the Wallace Collection - the London museum about which (and the armor in which!) We have already talked about, the Royal Armory and (already traditionally) the Metropolitan Museum of Art - will help us to get to know him. Today we will talk about the daggers in their collections ...

Well, let's start ... with criticism. From the criticism of such a solid source as the book of Vendalen Beheim "Encyclopedia of Weapons". For years she regularly served the reader as a source of information and suddenly - bang - almost immediately outdated. That is, quite a lot has been written there about daggers - in the St. Petersburg edition of 1995 from pages 218 to 226. But we will not see either the system or the terminology adopted today on them. Everything is "heaped up". And it turns out that it is almost impossible to get any complete impression from these pages. So that история, yes, it is developing, and this development is bearing fruit.

Now you can actually talk about daggers. They are not mentioned in the Bible, only knives. They are also not always found on miniatures in manuscripts. Rather, let's say this: the dagger is depicted in the hand, but the scabbard on the belt is not visible from it. 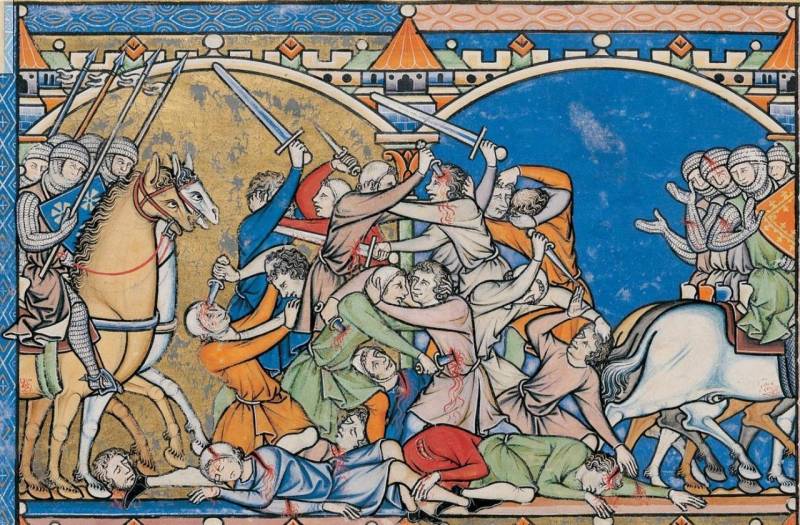 A miniature from the "Bible of Matsievsky": "... a fierce battle, and Abner with the people of Israel was struck by the servants of David. (Second Kings 2: 11-17). For example, the active use of daggers is shown in the well-known "Bible of Matsievsky". There are many very naturalistic scenes with their use, but the scabbard is not depicted on any of the characters. Swords scabbard - yes, there is. We will not see dagger scabbards in the miniatures of this manuscript! (Pierpont Morgan Library, New York)
Now let's turn to the effigies. And ... we will see that the earliest of them do not have the slightest hint of daggers! 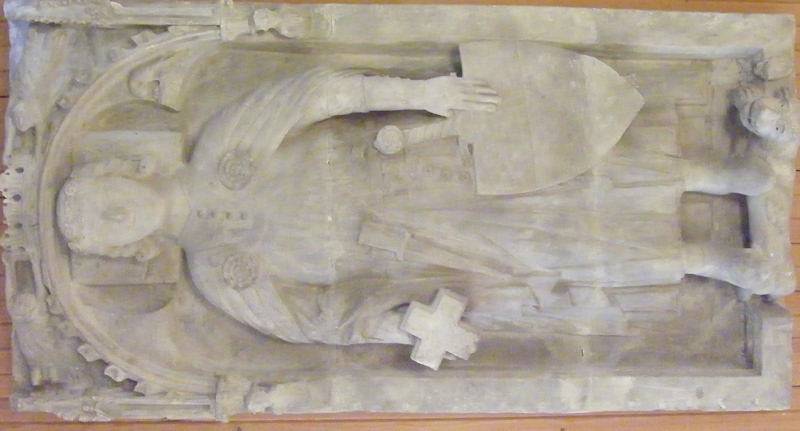 Perhaps the first effigy that has a dagger should be considered the German one, belonging to Gottfried von Kappenberg, who died in 1127. However, he received his ephigia only in 1300. So it reflects the attire and armament of this particular year, not earlier. And by the way, the dagger on his belt is not impressive at all! Although this allows us to assert that in 1300 he was already depicted on the effigies. Ashbach Kloster Museum, Germany
By now, in contrast to the era of Vendalen Beheim, the study of edged weapons of the Middle Ages has gone so far that we can systematize dagger samples by type and characteristic time of their use. So, it is believed that the first type of dagger, known since the beginning of the XIII century, was the quilon. Ephesus of Quilona completely repeated the hilt of the sword, that is, these daggers were, in fact, reduced in size swords. The name is believed to be associated with a characteristic crosshair and the same pommel. Most often this dagger can be seen in miniatures of the "Bible of Matsievsky", and this time is 1230-1240. But their service life was very long! 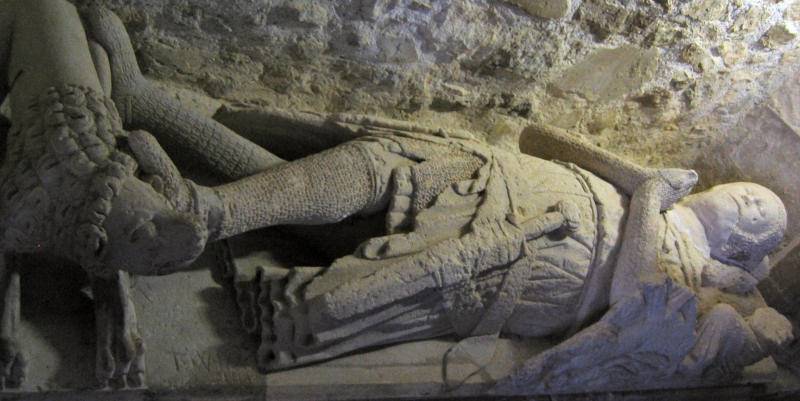 Effigia Stephen Alard, d. 1325 Buried in Winchelsea Church. On it, it is true, it is difficult to see the type of this weapon (it would be better to go from the other side!), But at least it is! Although, of course, his effigy is very informative. It clearly shows vertically quilted under-armor clothing (gambison), chain mail weaving, and surcoat folds ...
The second was the baselard dagger, known from the end of the XNUMXth century. Its name is believed to be related to the city of Basel in Switzerland. Daggers of this type had a recognizable shape, thanks to their handle: it resembled the letter "H". The blade had a diamond-shaped cross-section with two lobes.

Baselard at the end of the 333th century. The blade is straight, double-edged, with a flat rhomboid cross-section and tapering towards the point. The handle is hexagonal in cross-section, has an H-profile, half of which has been restored from the side of the pommel. The handle is divided into sections by brass washers. Two pins protrude from the top of the crosshair, possibly to secure the missing metal plate. There are finger grooves on the inside of the upper and lower cross. Length - 226 mm; blade - 107 mm; handle length - 29 mm. Blade width (max.) - 174 mm. Total weight - XNUMX g. Royal Arsenal, Leeds

Effigius Albrecht von Hohenloe, 1338 Buried in the church of St. Joseph in Schontale, Germany. As you can see, Albrech followed the fashion - his dagger is suspended on a chain! 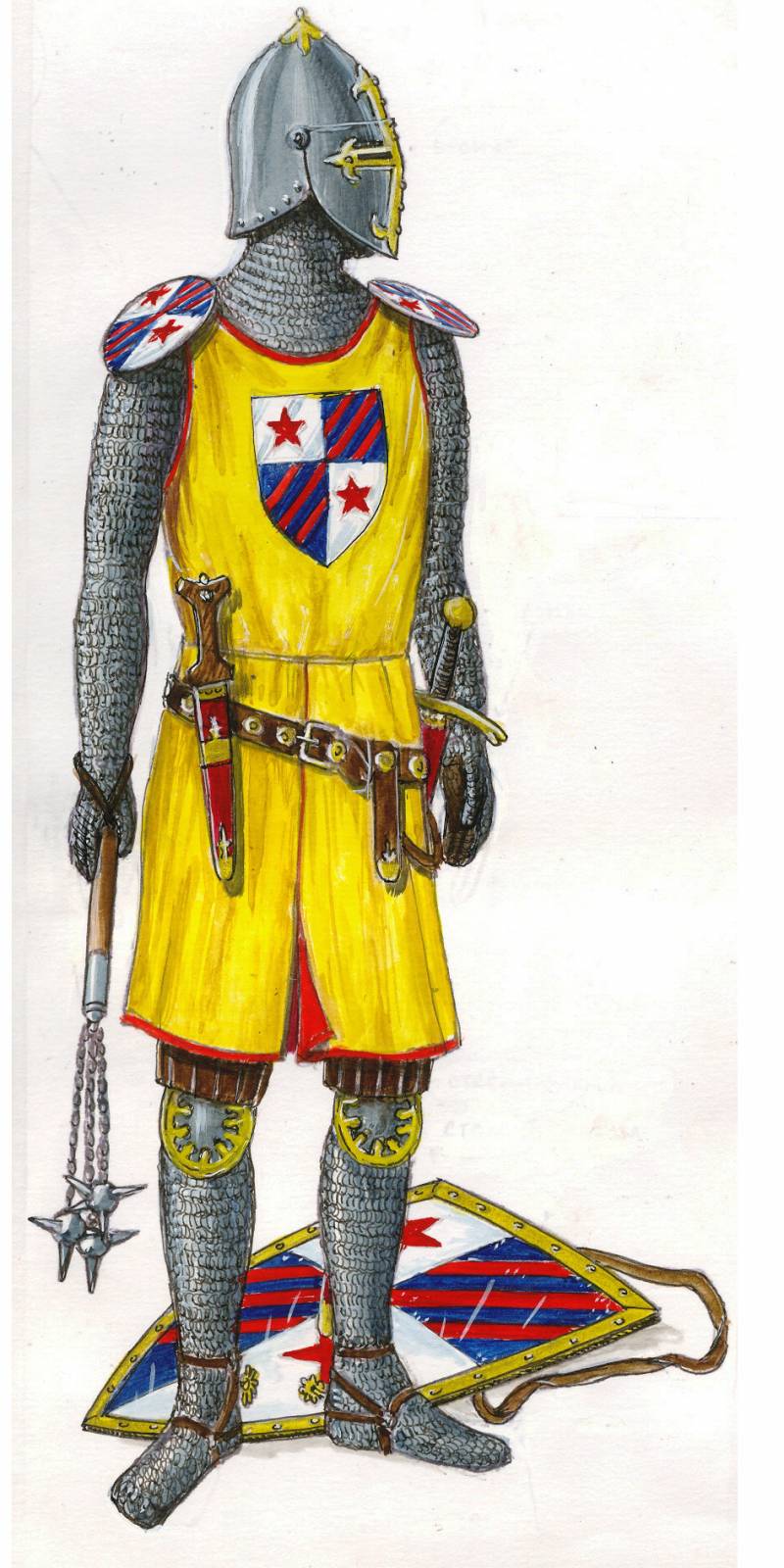 Reconstruction by a contemporary artist (A. Sheps), depicting a knight in traditional attire from the mid-XNUMXth century with a baselard on his belt. True, this one is somewhat behind the fashion, or it differs in a peculiar character, since he does not wear chains, and in addition he also uses such weapons as combat weights. By the way, this is one of the figures that should have been given in a series of articles on heraldry, but better late than never

Count Palatine of the Rhine, d. in 1340. Another bazerard on the chain. Germany, Mainz City Museum
In the collection of the Wallace Collection there is, by the way, a very long baselard that looks more like a sword. Why such a length? Here's why: city magistrates used to prohibit citizens from wearing swords. But daggers were allowed. This is how the townspeople tried to get around the law!

Effigia by William de Garges, 1346 Tamerton Foliot. His dagger is broken off, but the most interesting thing is that the handle remains and allows you to determine what he was armed with ...
Since the first third of the XNUMXth century, the dagger of the beams has been spreading in Europe. And this is what Sir William de Gorgues is armed with. It differed from all the other unusual shapes by the handle and not even by the handle itself, but by its crosshair, from which it got its crude name "dagger with eggs", although in the Victorian era a more decent name was invented for it: "kidney dagger". 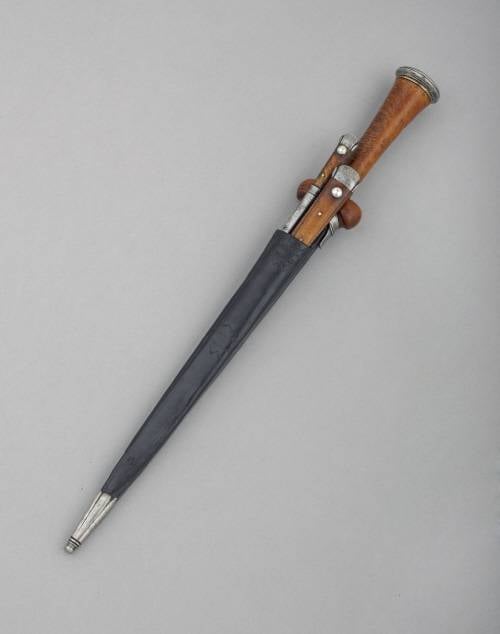 Bullock dagger with scabbard, knife and awl from the Wallace Collection. The work of an unknown master from Flanders or Northern Germany. Made in 1550 Materials: steel, maple, silver and copper alloy. Length: blade 26,1 cm, width: 1,9 cm.Weight: 0,25 kg. Single-edged blade, triangular section. Brand of the manufacturer, inlaid with copper alloy on the right side. The dagger forms a set with a scabbard, a small knife and an awl. The knife has a maple wood handle with a protruding silver button on the outside (undoubtedly to prevent going too deep into the scabbard), the manufacturer's stamp is also applied to the blade 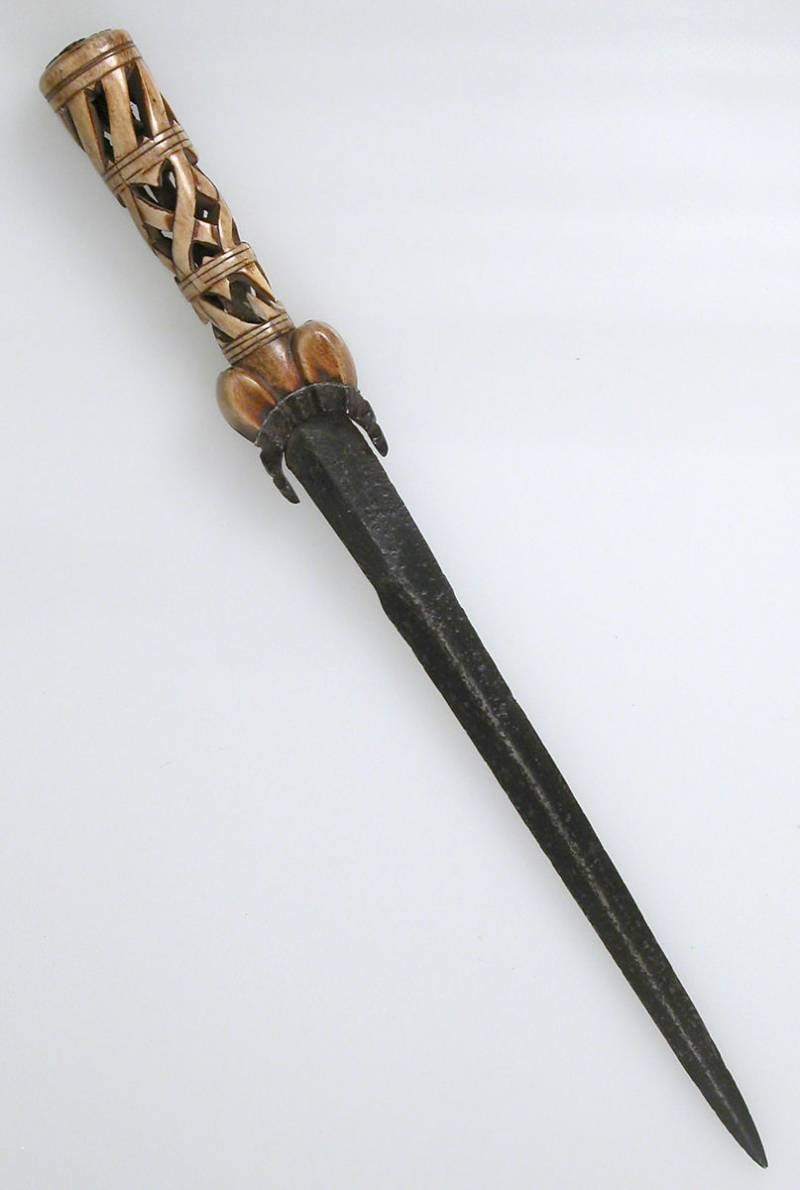 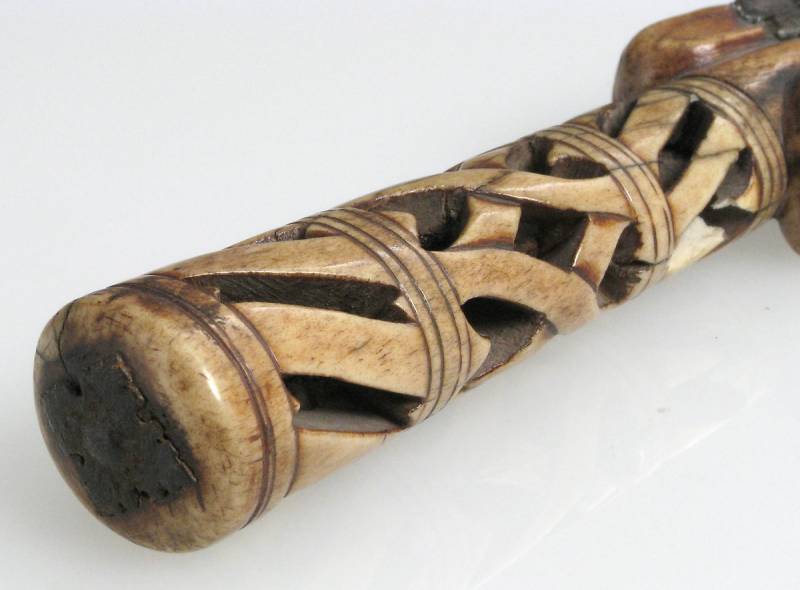 And he has a very beautiful handle cut through and through with a pattern ...
It is believed that the traditional Scottish dirk (remember, it was also used by General Monk, kidnapped by D'Artagnan for the restoration of King Charles II in the novel "The Viscount de Bragelon") originated precisely from the ballock, which is clearly visible if you compare their photographs. 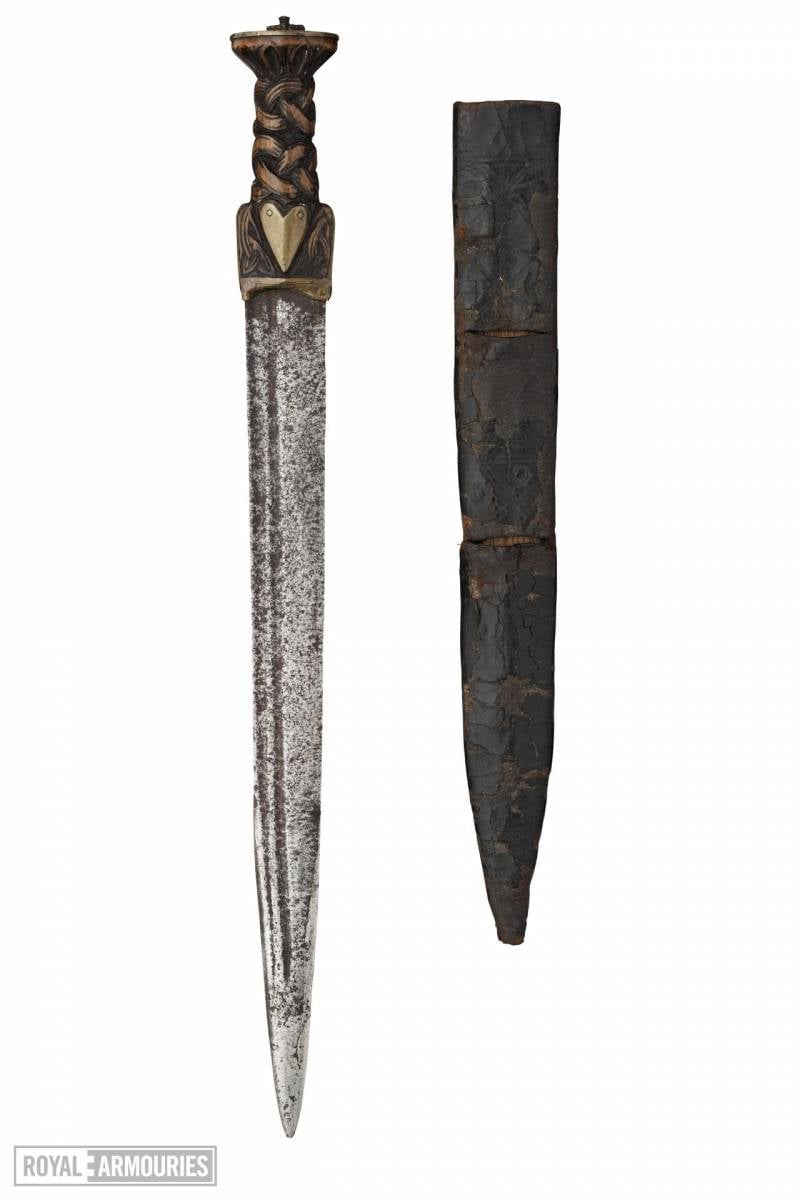 Scottish Dirk from the Royal Armory. OK. 1720-1760 The blade is straight, single-edged, triangular in cross-section, probably made from a sword blade, with a double fuller. The solid wood grip has been roughly carved with Celtic ribbon and has projections at the crosshair with a copper alloy heart engraved on both sides. The copper alloy head is held in place by a nut screwed onto the blade shank. The original black leather scabbard, decorated with lines and curls, lacks anchorage in the scabbard. Total length 400 mm, blade length 310 mm, weight 231 g. Scabbard weight 80 g.

Peter de Grandisson, d. 1358 Buried in Hereford Cathedral. As you can see, its effigy is monitored, periodically restored, so it looks just great. And we can see the kidney dagger in her too!
This concludes our today's story. But this topic itself will certainly continue.