Two decades of benefits and challenges. US Army abandons the M1128 wheeled tank 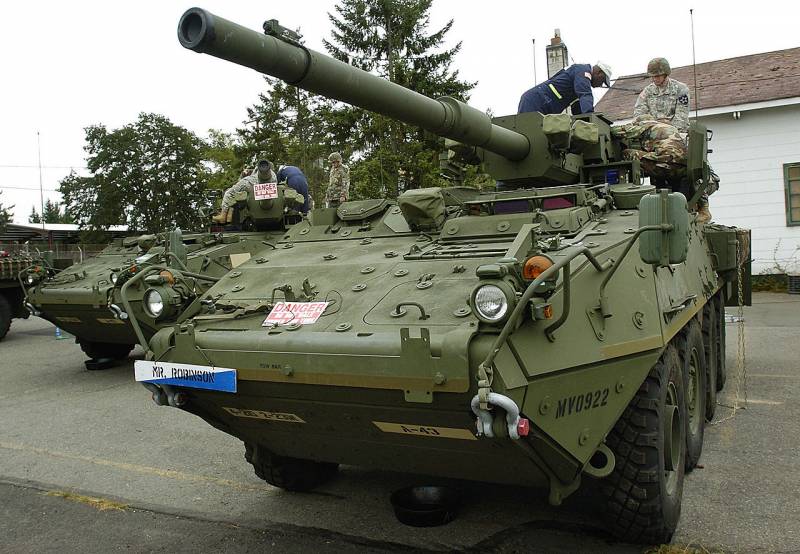 At the beginning of the XNUMXs, the US Army received the first "wheeled Tanks»M1128 Mobile Gun System (MGS) based on Stryker chassis. In the future, such equipment was mass-produced, distributed between different units and was actively used in real operations for fire support of infantry units. After almost two decades of service, the command again evaluated the M1128 machines and now decided to abandon them.

In the late nineties, the Pentagon decided to purchase a large number of armored vehicles of the Stryker family, made on the basis of the Canadian LAV III armored personnel carrier. The general chassis was proposed to be used as the basis for an armored personnel carrier, reconnaissance vehicle, commander, etc. A special place in the family was to take the M1128 MGS fire support combat vehicle.

For the M1128, an original fighting compartment with a gun mount was developed. Inside the hull, the crew's workplaces and part of the ammunition were placed, and outside there was a swinging artillery unit with all weapons and loading equipment. 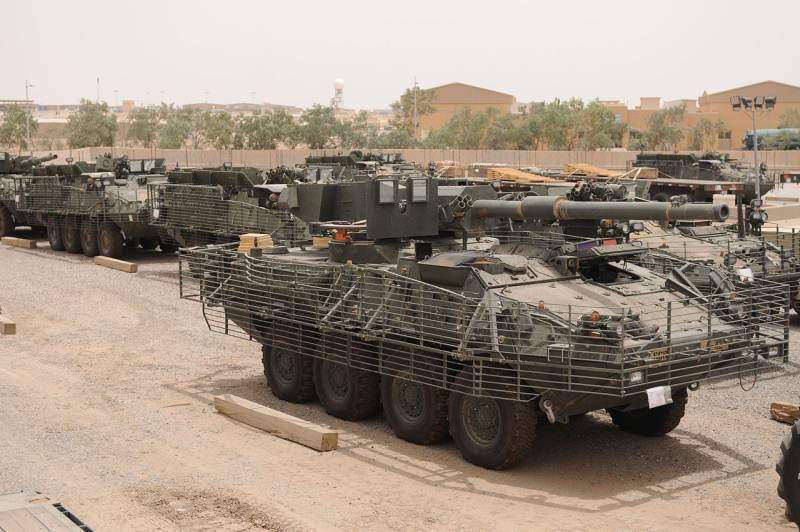 M1128 with additional protection before being transferred to Afghanistan, 2008
The armored vehicle was armed with a 105 mm M68A1E4 rifled gun with remote control of all processes. The automatic loader and stowage inside the hull contained 18 unitary rounds. The rate of fire was provided at the level of 10 rds / min. Additional armament included an M240 machine gun and smoke grenade launchers.

The "wheeled tank" M1128 MGS went into production at the same time as other "Strykers", in 2002. Production continued until 2010, and by that time more than 140 vehicles had been built. This technique was intended to strengthen the infantry formations on Stryker armored personnel carriers. One fire support vehicle was assigned to each platoon, and each company provided a platoon with three self-propelled guns. 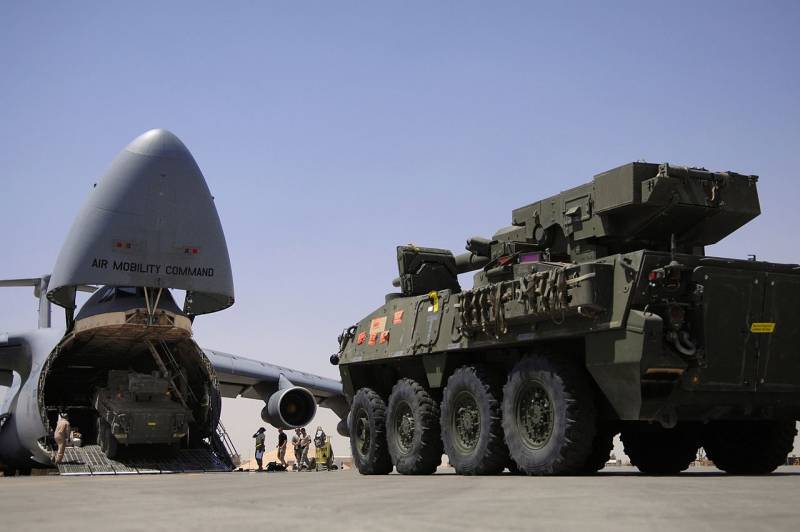 Since 2003, the M1128 has regularly participated in military operations and carried out real combat missions. During operation, both advantages and disadvantages were noted, and in general MGS was considered a fairly successful model. In addition, during combat operations, such equipment showed high stability and survivability: only three armored vehicles were lost for the entire time. Several more had to be written off due to breakdowns, and at the moment the US Army has 134 cannon Strykers.

According to the latest decisions, their number will be reduced in the near future. Until the end of 2022, the army will completely abandon such equipment due to moral and physical obsolescence, as well as due to the inexpediency of further development.

It should be recalled that the Stryker family of equipment was criticized already at the stage of project development, and some of the claims were justified and objective. Some of them were taken into account in the further modernization of equipment.

One of the first in practice was the problem of overheating of the habitable volume, as well as components and assemblies. It manifested itself especially clearly when working in the hot climates of Iraq or Afghanistan. Initially, it was partially solved with the help of cooling vests for the crew, but the equipment continued to overheat. 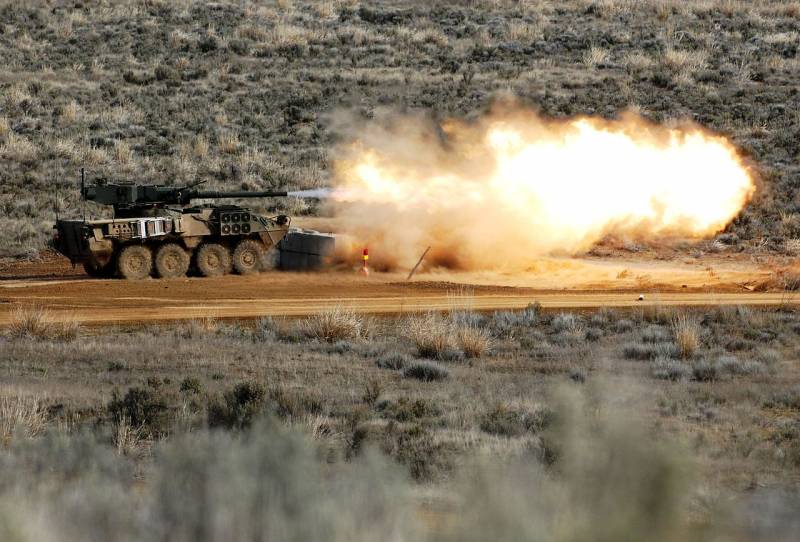 Shooting practice with the participation of the modernized MGS - the external block of the air conditioner is visible on board
Only by the end of the XNUMXs, this problem received a full-fledged solution. During the planned repairs, MGS cars began to be equipped with a full-fledged air conditioner, which removes excess heat and cools the internal compartments. The equipment after such a modernization could be distinguished by a characteristic casing with a fan battery on the left side, near the engine compartment.

During operation and combat use, all Strykers faced common problems. It turned out that the equipment is overweight, and the standard power plant does not always cope with the load, which causes problems with cross-country ability. In some situations, large dimensions and a high center of gravity turned out to be a problem. At the same time, the correction of such shortcomings required a significant revision of the project, which was considered impossible.

In Iraq and Afghanistan, improvised explosive devices have become one of the main threats to American armored vehicles. In this regard, the armored personnel carrier and some other Stryker vehicles received a new underbody protection with double V-shaped armor. The installation of similar protection on other samples of the family, including the M1128 MGS, was abandoned, which led to the preservation of well-known risks.

The limited number of vehicles built was a negative factor. 140 cannon armored vehicles were not enough to fully re-equip all "striker" units and formations. Accordingly, a significant part of them were left without an effective large-caliber fire support. 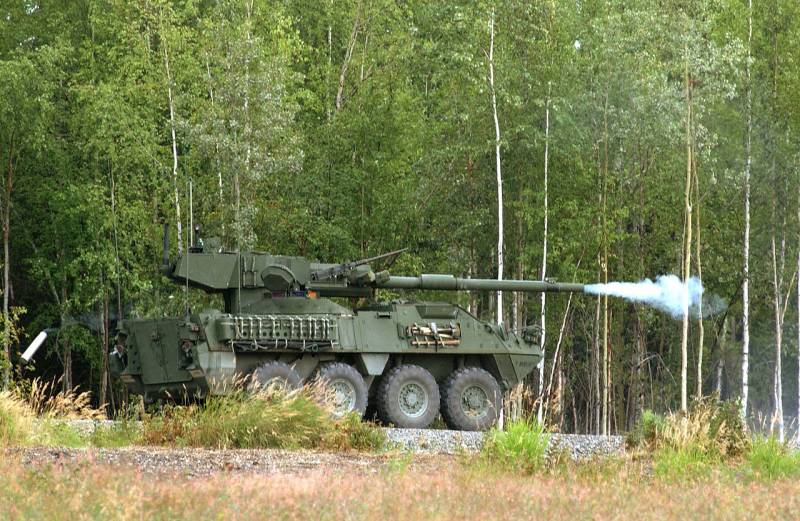 The moment after the shot. The discarded sleeve is visible on the left.
However, the insufficient number and technical shortcomings were compensated for by rather high combat indicators. The 105-mm cannon with an automatic loader and a wide selection of shells has proven to be a convenient means of fire support, which is an advantageous addition to other cannon armaments of motorized infantry.

A few days ago, the Pentagon announced its intention to retire the M1128 "wheeled tanks". The army studied the situation and came to the conclusion that such a step was necessary. At the same time, she managed to find ways to maintain the firepower of the units at the required level after abandoning the 105-mm cannons on a wheeled chassis.

The army believes that the M1128 MGS is outdated by now. The presence of certain systemic problems in the line of the gun and the automatic loader is also noted, which complicates and increases the cost of operation. In addition, the disadvantage remains in the absence of mine protection like other machines of the Stryker family.

Correcting all these shortcomings on the 134 existing machines was considered impractical. Therefore, it is proposed to get rid of them within the next one and a half years. The stock of parts and assemblies for the M1128 will be used with other equipment from the family. The funds and resources required for the operation of MGS are proposed to be redirected to other projects with real prospects. 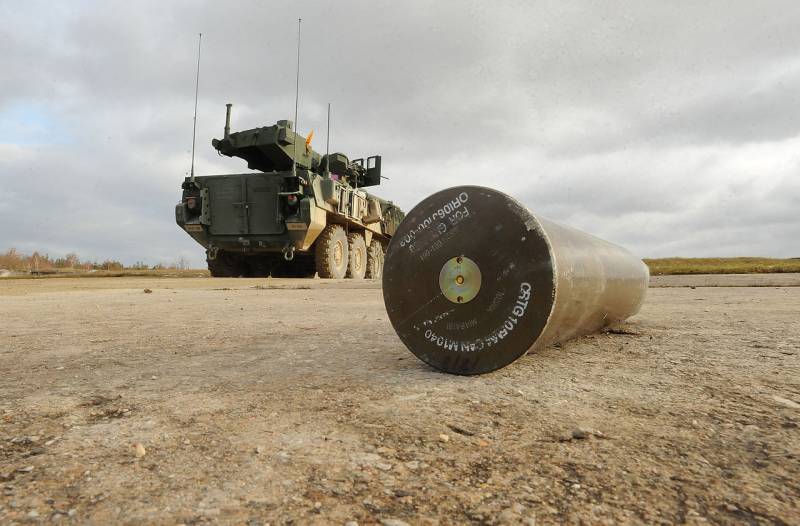 One of the main tasks now is to maintain the "lethality" of infantry units at the same level. For this, it is proposed to develop existing combat modules with 30-mm cannons by improving fire control means. Development will receive projects of combat units Medium Caliber Weapons System and Common Remotely Operated Weapons Station-Javelin.

It is assumed that such weapon systems will become a full-fledged replacement for the 105-mm cannon with a set of ammunition. At the same time, advantages are expected in the form of increased ammunition and increased flexibility of use, due to the presence of small-caliber guns, machine guns and missiles. Thus, new models of equipment will be able to effectively solve the main tasks of the current M1128, but they will do it by different means and methods.

It is obvious that the life cycle of a new model of military equipment cannot be infinite, and sooner or later it will have to be removed from service due to moral and physical obsolescence. The presence of congenital defects or the manifestation of additional problems during operation can speed up these processes and bring the end of service date closer.

The M1128 MGS "wheeled tank" entered service in 2002 and will be decommissioned in 2022. Despite all the objective shortcomings and problems, this machine was able to gain a foothold in the troops for two decades, which in itself can be considered a success. However, the Mobile Gun System is still being removed from service - unlike other samples of the Stryker family, which managed to undergo modernization and now have to remain in the army until a full replacement appears.