In 2017, the Kalashnikov concern presented a promising microwave sniper rifle designed by A.Yu. Chukavin. By now it is weapon came to state tests, according to the results of which the army will determine its advantages and the need for adoption. The fate of a promising rifle is still uncertain, but the available amount of data already makes it possible to evaluate its design and determine the advantages over other samples.

Concern "Kalashnikov" began developing a new sniper rifle in the middle of the last decade. It was planned to create a multi-caliber complex with common components, capable of using several types of ammunition. Such a weapon in the future could replace a number of models of domestic and foreign production in the troops, primarily the deserved SVD.

The first demonstration of the finished rifle designed by A.Yu. Chukavin took place at the Army-2017 forum. At the same time, the main technical features and characteristics, as well as the prospects for the development of the project and the implementation of its results in the troops or in power units, were revealed. So, the multi-caliber potential of the project was planned to be realized in the form of three products for different cartridges. 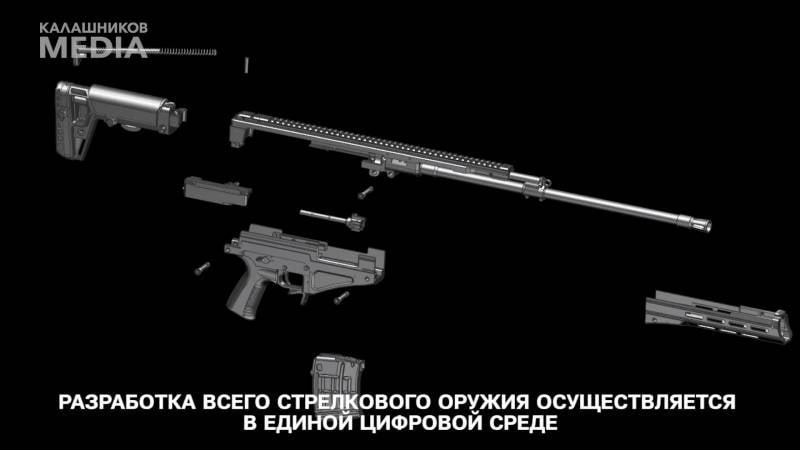 Diagram of incomplete disassembly from a promotional video from Kalashnikov
Subsequently, the proactive microwave oven in all configurations was nominated for competitions of the Ministry of Defense. So, in the development work with the "Reaper" code, the SVCh-54 rifle chambered for 7,62x54 mm R participates. Such a product has a chance to replace the SVD in the future. At the same time, the ROC "Ugolyok" is being carried out - its purpose is to provide rifles for foreign ammunition .308 Win (7,62x51 mm) and .338 Lapua Magnum (8,6x70 mm). The SVCh-308 rifle has already been created for this competition.

The prospects for modification under the "Lapua Magnum" have remained unclear until now. The more powerful cartridge required an enlarged receiver, a new barrel and a muzzle device, which made it difficult to develop the entire complex. Such a product has been successfully designed and submitted for testing. But the other day the weekly "Zvezda" reported that they decided to abandon the modification of the microwave for 8,6x70 due to the complexity and ambiguous prospects.

Thus, two samples of a new family from the Kalashnikov concern are undergoing state tests within the framework of two R&D projects. The timing of the completion of these activities was not specified. Their results are also questionable. However, judging by the known data, Chukavin's rifles have a good chance of entering service. 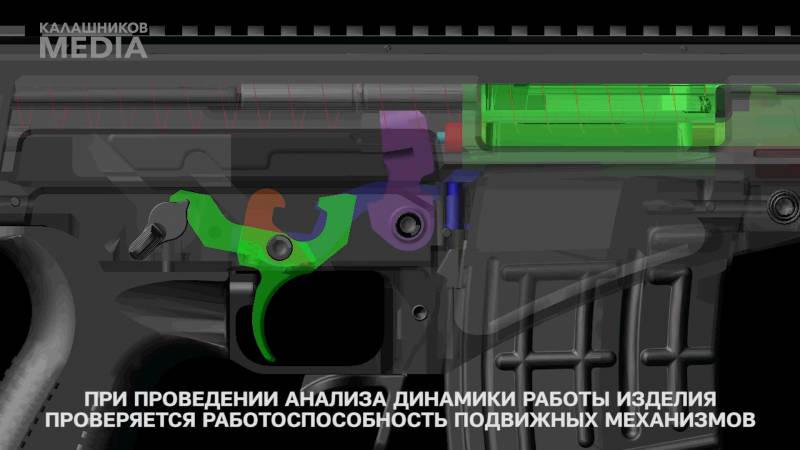 Demonstration of trigger action: a moment before the trigger touches the drummer

The basic design of the microwave rifle is developed taking into account the accumulated experience and using new or well-known solutions. The wishes of snipers from different structures and divisions were also taken into account. The result of this was the design of a self-loading rifle with high performance, suitable for adaptation to different ammunition with obtaining the required range and accuracy.

The microwave oven is built on the basis of a U-shaped steel receiver, inside which the bolt group is "suspended". The barrel, forend and butt are attached to it. The firing mechanism is housed in a removable aluminum casing, which also includes the magazine shaft and the trigger guard. Modifications of the microwave oven-54 and microwave-308 are made on the basis of a unified box and casing. For a rifle under the .338 LM, its own parts with different dimensions and strength indicators are required.

The rifle received an automation based on a short-stroke exhaust gas. Locking is carried out by turning the bolt using three lugs. Depending on the cartridge, a barrel length of 410 to 560 mm with a muzzle brake is used. USM has two-sided controls and adjustable trigger pull. For power supply, standard magazines from SVD (under 7,62x54 mm R) or specially designed for .308 Win and .338 LM are used. The capacity of the new magazines is up to 20 rounds. 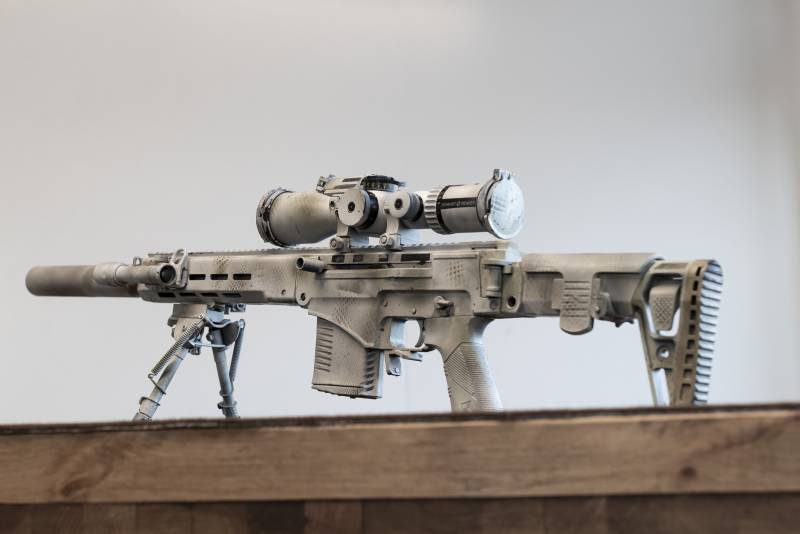 Microwave-308 with a set of additional accessories
On the forend and receiver, a single long Picatinny rail is provided on top for installing sighting devices. A telescopic folding stock is provided.

The most important feature of the microwave design, which gives significant advantages, should be considered the multi-caliber architecture. On the basis of common components, it was possible to create a design suitable for scaling for different ammunition with obtaining different combat characteristics. Three modifications have already been created, and new ones may appear in the future - subject to the availability of appropriate opportunities and wishes.

In the microwave project, the usual architecture with a receiver and a top cover was abandoned. Due to the U-shaped box with the lower trigger casing, high rigidity of the structure is provided, incl. to install the sight. In addition, the maintenance of the weapon is simplified, in particular the cleaning of the trigger, which is now available with minimal effort. 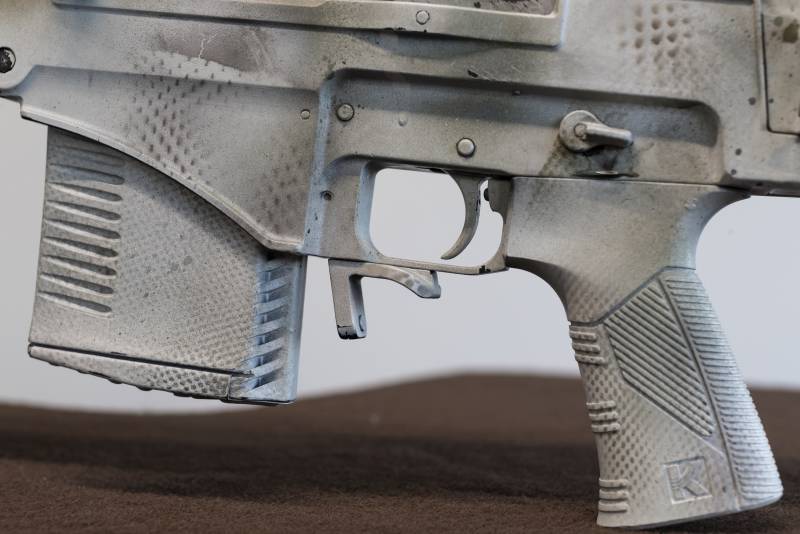 Lower casing of a rifle with a magazine shaft and controls
Taking into account the experience of operating rifles of different types, measures have been introduced to improve ergonomics. Unlike SVD and its modifications, it is possible to adjust the trigger and butt. In addition, the unified mount allows the use of a wide range of sighting devices, day and night.

High fire characteristics are declared for microwave ovens. The rifle in all modifications is capable of hitting targets at ranges of at least 800-1000 m. At the same time, an accuracy of 1 MOA is ensured, which meets the current requirements for a modern army sniper rifle.

Difficulties in the way

However, the microwave project is not ideal and has some weaknesses. Thus, practice has shown that multi-caliber architecture has limited potential. It was possible to unify two variants of the rifle as much as possible, while the third required its own set of parts, which made the project too complicated. At the same time, the creation of a modification of a rifle with a box from the microwave oven-54/308 chambered for the Lapua Magnum cartridge is not possible for objective reasons. 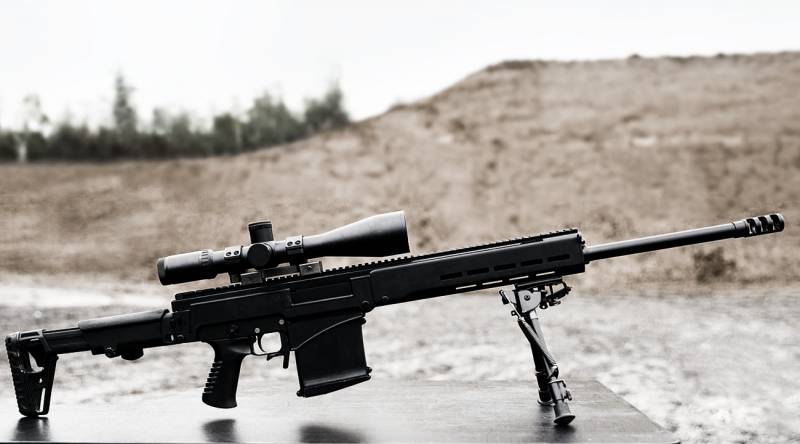 Experienced rifle for .338 Lapua Magnum
Previously, the microwave project was threatened by its status of an initiative development. Concern "Kalashnikov" created a whole family of weapons without an order and tactical and technical requirements from the Ministry of Defense. Fortunately, the army launched two R&D projects to create new sniper rifles, in which there was a place for a promising family of A.Yu. Chukavin. Thanks to this, the new project got a chance to go through the entire development cycle with possible adoption.

It is also necessary to recall that at present there is not the first attempt to replace the old well-deserved SVD. Previous projects of this nature have had limited success at best. It is not known whether it will be possible to launch a full-scale rearmament this time.

Construction and its perspectives

Thus, the design team of the Kalashnikov concern under the leadership of A.Yu. Chukavina was able to create an interesting and promising rifle complex from a technical point of view. It has broad engineering capabilities and operational prospects. In addition, the new weapon has already successfully passed the factory tests and the fine-tuning process.

Now everything depends on the decision of the army, which is conducting state tests on two development projects at once. If they are successfully completed, the Ministry of Defense will be able to recommend new models for adoption and launch a new program for the modernization of sniper arsenals. What it will be and what place the microwave rifles will take in it - time will tell.

Ctrl Enter
Noticed oshЫbku Highlight text and press. Ctrl + Enter
We are
What should be a modern sniper (part of 1)To replace the legend: The new microwave rifle has undeniable advantages over the SVD
Military Reviewin Yandex News
Military Reviewin Google News
118 comments
Ad