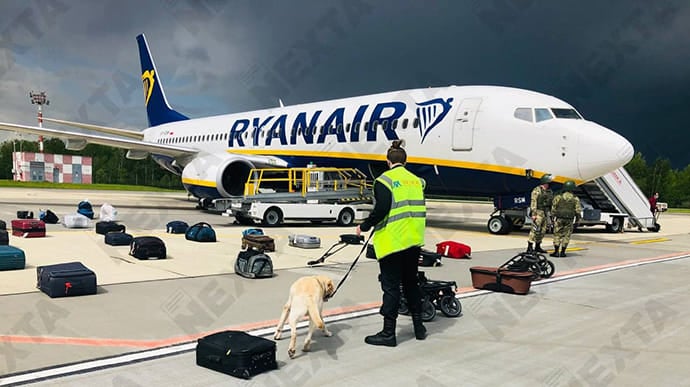 We are already accustomed to the fact that when situations arise in which a country acts according to the same patterns as Western countries, the duty excuse “this is different” is turned on. What is permitted to Jupiter is not permitted to a bull! Quod licet Iovi, non licet bovi! If the United States violates all international norms, it is for the security of America. If Europe violates, that's different.

Sunday evening was interesting. Somehow it has already become a sort of sleepy state of the information space on such evenings. Summed up the results of the past week. We read about the next losses of the defenders of Ukraine in the Donbass, which, according to comments from the LPNR, turn out to be the fruits of another “taking on the chest” of a shmurdyak and, as a result, double loading of a mortar or cross-fire.

And then, in this familiar routine, the landing of a mined plane in Minsk! Moreover, the arrest of the founder of the Nexta Telegram channel Roman Protasevich, who happened to be among the passengers. And it seethed! From the western side and from across the ocean, accusations of state terrorism poured down on Lukashenka. NATO, the EU, the United States are poisonous, talking about the punishments that await Belarus ...

I am sure that most of the readers already know about the incident, even in the smallest detail. Numerous versions of what had happened appeared at night. Therefore, I will selectively tell you the details. Only those that few people know about.

But knowing how quickly Belarusians learn, I think at the time of this article's release, such a message will already be made public. With appropriate documentary evidence. The idea arises that there, in Greece, Belarusian agents have worked. But it’s hard to believe in this. Too virtuoso operation that requires some preparation and, therefore, time. And the KGB didn't have it.

I liked the reaction of Belarusians to this event. This is me about learnability. Instant reaction from officials, military, and diplomats. Just by analogy with the events in Minsk of the recent past, when Lukashenka was simply kicked in the West for information. This time Minsk kicks. The West will have to come up with its own explanations for questions from Belarus.

There is one more fact, allegedly not connected in any way with the plane. This is a nuclear power plant. Yes, the same Belarusian nuclear power plant, which is "a bone in the throat" of Polish and Baltic politicians. And those, a priori, are the watch of the EU and NATO. Let me remind you that only in May this year, NATO aircraft made about 30 reconnaissance flights to the BNPP area. Of these, two were in general with a call to the territory of the Republic of Belarus.

Why am I linking a nuclear power plant and an airplane? A very simple explanation. Look at the course of the aircraft until it is intercepted and escorted to Minsk by MiG and after the establishment of escort. Now imagine yourself as the head of the safety department of the same nuclear power plant. A plane filled with explosives is flying over the station.

Naturally, such a "flying land mine" must be taken away from the object in any way and taken for escort. Simply because if such an object falls into the territory of a large settlement, a large number of victims cannot be avoided. So the MiG led a civilian plane on a course that did not include such settlements.

By the way, this is an explanation of the fact that the plane was not sent to the Baltic states, but returned to Minsk. The message was received when the plane was in the zone of responsibility of the Belarusians, which means that they should manage the situation. Can you imagine what would happen if the message about mining was confirmed and the plane took off over the Baltic states? How much dirt would have poured out on Minsk.

And I would like to speak about one more fact. The fact that Roman Protasevich no longer works for Nexta. Remember the "grandiose drunkenness" allegedly staged by the owners of this channel, which led to Nexta's disappearance from the information space for three days? I did not specifically understand this issue, I will just express the opinion of Belarusian bloggers and journalists.

Protasevich began to simply blackmail the co-owner, believing that the Polish special services would help him, but ... I once wrote about the special unit of psychological military operations of the Polish special services, so they supervise the activities of Roman Protasevich. There is a lot of information about this in Polish and Belarusian sources. It is quite possible that Protasevich was merged by former wrestling comrades-in-arms.

I confess, after reading the message about what happened, I felt a sense of pride in the Belarusian, and not only, the KGB (FSB). I know that Belarusians are one of the most respected employees in their field. The fact that the KGB and the FSB are in close cooperation too. I even knew that Belarusian specialists are not inferior in skill to Russian ones. I even know about a certain advantage over specialists from Russia in terms of weapons and equipment.

The feeling of pride caused me something else. The professionalism that was characteristic of Soviet specialists. How carefully and carefully the KGB treats the experience of the older generation. How others' failures are used to achieve their own victory. How skillfully they bring to life what the enemies have invented.

The very idea of ​​using the capabilities of air dispatchers to carry out special operations was invented a long time ago. Let me remind you of the unprecedented in the number of violations of laws, agreements and rules, the landing of the plane of the President of Bolivia in 2013. Let me remind you also an unsuccessful attempt to conduct a special operation with the "Wagnerians" quite recently.

It was then that some details of the failed operation surfaced. Like a sudden fatal illness of one of the passengers, for example. It is clear that such a disease must be prepared. And so that even minimal, but prepared for the first medical aid flight attendants did not understand anything. Time, time is never enough ...

That is, the plane can be landed in many ways. And it is quite legal. "Mining" is just one such method. Probably one of the cheapest and fastest, but the way. In addition, you can use it in any extreme situation, while not violating any laws of both your own state and international ones.

And how beautifully the detention itself went. No hysterics, no screams for freedom, no tears from a little stronger than usual. with his hands turned behind his back ... I got up and quietly walked peacefully to the investigators. And you were detained not because we do not like you, but because you are on the international wanted list for terrorism. Nothing personal, just work.

In general, experts have guessed about the possibility of such an operation for a long time. Moreover, I even heard the opinion of one of these people that such an operation should be carried out against Tikhanovskaya. She, for the information of her security, also flew the same flight, the same company and along the same route a little earlier.

The question arises as to who is more important for the investigation today, Tikhanovskaya or Protasevich? At first glance, the figures are unequal. The hyped "president" and "retired goat drummer", who now runs a completely different, the same extremist channel, but has nothing to do with Nexta. But this is only at first glance.

There is one more thing that is now causing great concern among the Polish and, possibly, other Western, special services. It was Protasevich who was the person who directly collaborated with them, contacted employees and received instructions, finances and assignments.

Can you imagine how much information the Belarusian KGB will now receive about the activities of their colleagues from the Western special services? How many names will be displayed, how many communication channels of the Belarusian opposition with Western countries will be revealed. And there and, possibly, the canals will stretch further east, towards Moscow ...

I am sure that you have already learned a lot that I simply did not write about today from other sources. Personally, I have the opinion that the final stage of cleaning the Belarusian society from the mold of anti-state terrorists is coming. Probably, many channels through which the support of liberals from Western countries went will be closed.

Many "supporters of freedom" and "observance of people's rights to overthrow the government" will flee to Poland and Ukraine. I think we will soon hear about demands from Warsaw, Kiev, Vilnius, Tallinn, Riga, Brussels, Washington and some other capitals for the release of political prisoner Protasevich. And the announcement of new sanctions "to the last dictator of Europe."

The President of Belarus perfectly understands all the consequences that will follow today or tomorrow. However, Alyaksandr Lukashenka deliberately accepts this. In my opinion, this position of the Belarusian leader is based on some facts that have not yet been announced in the media. Lukashenka has a couple of jokers up his sleeve that can calm even the most zealous mongrels in Washington.

The fact that Belarus did not break down, was not afraid of pressure from the West, also speaks of the fact that Minsk has completely decided on the future. Open confrontation is not only a rather bold act, but also a signal that Belarus has no other path than the one followed by Russia. Honestly, this fact makes me happy. I am tired of the betrayal of the "fraternal peoples."