China on the road to world domination: the "dark fleet" 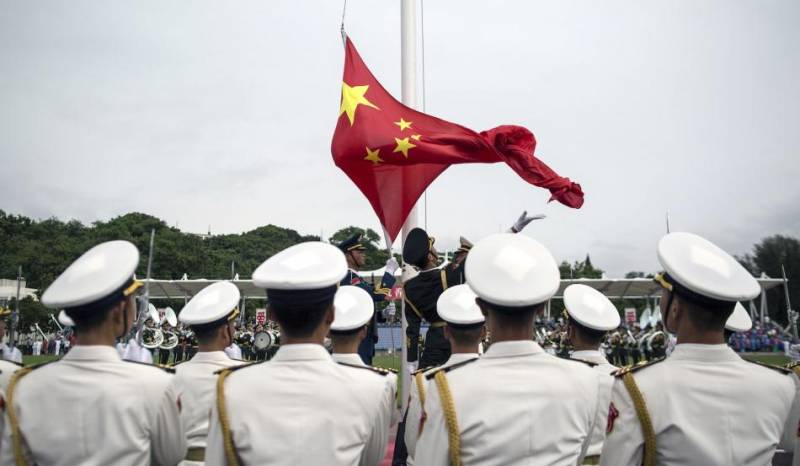 "Due to the interconnected nature of the global economy, countries can cause serious harm to the economies of other countries without taking any offensive action ..."
- Colonels of the PLA Qiao Liang and Wang Xiongsui. Treatise on strategy and operational art "Unlimited War".

China to this day remains a mystery not only for Russia, but for the whole world. Despite the aggressive political rhetoric ("Wolf Warrior Diplomacy: China and Its Foreign Policy"), The People's Republic of China avoids publicity for its military actions.

Beijing is inclined to conduct extremely secretive and, perhaps, even insidious operations, which, for all their effectiveness, sometimes do not have any evidence of the involvement of the Chinese government, and, accordingly, have no consequences at the state level.

China is one of the founders of the modern doctrine of military-civil merger. According to the fabrications of Chinese macro-strategists and analysts, the "kinetic" war, that is, the classical military confrontation between the powers, no longer exists - there is only an intellectual war, which is actively waged, including by "hybrid" methods.

The real competition of interstate systems is now conducted in the environment of analysis and processing of information, the speed and efficiency of decision-making, the "overload" of the enemy's capabilities with asymmetric methods of warfare.

And, probably, the PRC knows about this much more than its global opponents.

One of the clearest examples of the implementation of the Chinese strategy of hybrid wars is the so-called "Chinese dark fleet" - a little-studied product of a military-civilian merger, which allows Beijing to effectively and aggressively advance its interests without engaging in direct hostilities at sea.

As we discussed earlier in the article "Small fleet and big politics", the huge navy of the PRC, despite all its power and size, cannot be used to implement the forceful methods of Chinese influence in the region. Its main current tasks are to contain and maintain a constant military threat, which deliberately inflames already difficult relations with all neighbors.

However, for obvious reasons, the Chinese navy cannot be openly used to solve the immediate political tasks facing the country. And, accordingly, the Communist Party needed a different instrument ...

"The best way to achieve victory is not to fight, but to control."
- Colonels of the PLA Qiao Liang and Wang Xiongsui. Treatise on strategy and operational art "Unlimited War".

Involvement of civil fleet for military purposes is not a new practice. For decades, analysts and experts in naval warfare have pondered various aspects of this issue - from the conversion of merchant ships into auxiliary helicopter carriers to the idea of ​​reviving raider ships with anti-ship missile weapons.

For obvious reasons, the use of the Chinese merchant fleet for the purposes of "hybrid" warfare as a means of terror was impractical and even dangerous. The PRC is extremely dependent on sea trade and foreign economic relations. Accordingly, such a step would give Beijing's opponents a legal reason to strike at a strategically important resource for the country, which no one could allow.

A way out was found - it was the gigantic size of the Chinese fishing fleet.

It's worth starting, perhaps, with dry statistics data:

2. In the PRC, there are about 370 non-motorized fishing vessels and another 000 motorized. And although in 672 China implemented a plan to reduce the fishing fleet, it was subsequently abandoned. The exact size of the fleet is currently unknown, but all signs indicate that it is regularly increasing significantly.

3. Fisheries in the People's Republic of China provide jobs for over 16 million people in all sectors of the economy. More than half of the employees were employed full-time. This is an extremely important factor that ensures the mobilization potential of the "dark fleet".

The fight for control of the South China Sea, which routes 25% of the world's trade traffic and trades $ 5 trillion, cannot be fought with the direct use of military forces. This requires from China, which claims 90% of the sea area, non-standard solutions.

The solution was large-scale military training and subsidies for fishing fleet cooperatives.

Using fleets of fishermen as a tool for "hybrid warfare" is not in any way unique or innovative for Chinese strategists. In the not so distant past, the People's Republic of China actively used the "people's maritime militia" to seize disputed territories: for example, in 1974, when the Chinese army tried to seize part of the islands of the Republic of Vietnam, "volunteers" were also used who landed on the islands of Robert, Mani, Duncan and Drumont, who played an important role in the occupation of the Western Paracel Islands. 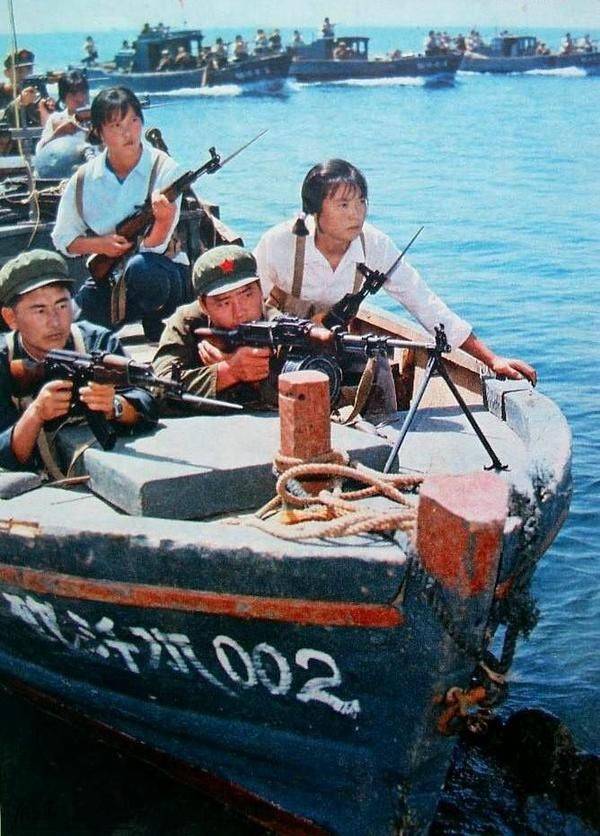 However, then the actions of the "fishing people's militia" in the initial phase of taking control of the Paracel Islands gradually led to a direct armed confrontation between the naval forces of Vietnam and the PRC.

In 2012, China began actively abandoning its former plans to reduce its fishing fleet, and since 2013, more than 50 Chinese fishing vessels (more than 000% of the total fishing fleet) have been equipped with Beidou special navigation systems. The purpose of this equipment is that it allows you to coordinate the actions of fishermen, and, accordingly, to centrally control their fleets.

Beidou were installed without fail, and users (fleet cooperatives) were required to pay only 10% of their cost.

The "naval militia" is used to perform strategically important tasks: designating territorial claims in the region, conducting reconnaissance activities, making it difficult for the enemy to access disputed territories. Since, as mentioned above, boats are equipped with satellite navigation, they can be involved in the organized conduct of rescue and other types of operations, including the collection of data on the presence of foreign vessels in fishing areas.

Analysts concluded that the fishermen used as China's "third naval force" are acting in coordination with the navy and coast guard. It is they who are directly involved in the preparation and organization of "hybrid" operations.

The backbone of the military cadres of the "dark fleet" are numerous retirees of the PLA: over the past decade, the Chinese armed forces have been significantly reduced, and the freed personnel have been used to replenish non-standard and non-traditional paramilitary structures.

The most combat-ready units of the "naval militia" even have weapons: small-caliber anti-aircraft artillery, portable anti-aircraft missile systems and sea mines. 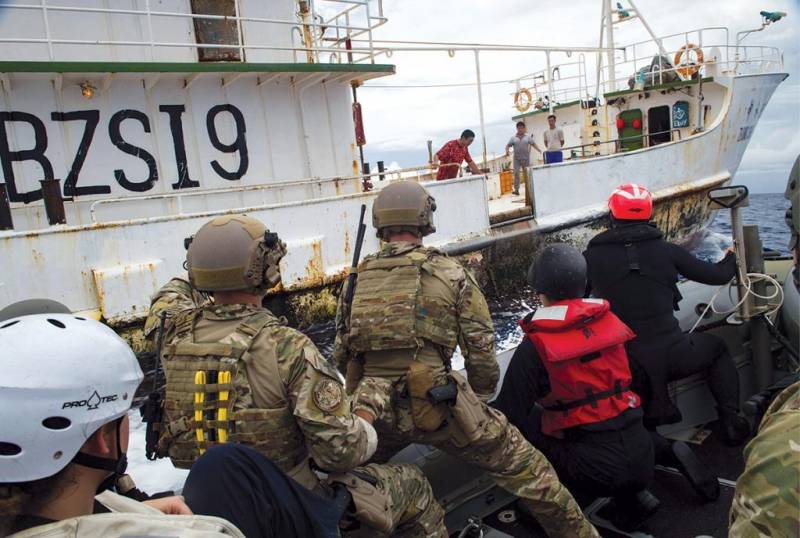 US Navy and Coast Guard personnel board a Chinese fishing trawler during Operation Oceania Maritime Security Initiative. Photo taken by US Navy Junior Officer Brian Jackson
The naval militia is also called upon to provide logistical support to Chinese warships. For example, fishing vessels were used to transport construction materials needed to build artificial islands in the South China Sea (they have transported at least 1990 million tons of cargo since the 2,65s).

The islands, in turn, are an extremely important asset of the PRC's naval forces. Only in the months of this year, two air defense batteries were deployed on them, as well as a radar station. They, in turn, allow you to control the airspace in the center of the South China Sea. Among other things, a runway was built, capable of receiving on one of the artificial islands, including heavy military transport aircraft.

Most of the time, the "maritime militia" provides assistance in search and rescue operations and provides additional protection for critical infrastructure: ports and oil rigs. Standing apart are special missions to assert China's territorial claims, as well as the pursuit and terror of foreign civilian and state ships (including military).

So, in 2009, the naval militia surrounded the USNS research vessel "Impeccable", which was operating near the territorial waters of the PRC. Chinese fishermen, with the support of the PLA frigate, actively maneuvered near the ship and tried to cut off its towed group of sonars.

A year later, China used a similar strategy against Japan in the territorial conflict over the Senkaku Islands. On September 8, 2010, a Chinese fishing vessel rammed two Japanese Coast Guard ships.

In 2012, Chinese fishing vessels, in coordination with the Coast Guard, became Beijing's vanguard in the fight for the Scarborough Bank, a tiny island in the South China Sea. The naval militias occupied the island and declared it part of the territory of China. On this история did not end - in the following years they actively attacked the Filipino fishermen who fished on the Scarborough shoals for decades.

In May 2014, dark fleet vessels supported the installation of China's massive Haiyang Shiyou-981 oil rig south of Triton Island. This area has long been considered the exclusive economic zone of Vietnam (EEZ), and a confrontation broke out for control over it, in which more than a hundred ships from both sides participated. China's Fugang Fisheries has deployed a militia of 29 trawlers to protect the oil rig in support of the Guangzhou Military Region and Hainan Military Region. For more than two months, the "naval militia" of fishing vessels held a perimeter defense around the oil rig. Fishermen aggressively attacked Vietnamese vessels trying to enforce their EEZ boundaries and sank three of them.

In March 2016, a huge fleet of 100 Chinese fishing vessels invaded the Malaysian Laconia Shoal off the coast of Sarawak, disrupting Malaysia's exclusive economic zone. These ships did not have national flags and other identification marks, but were accompanied by two ships of the PRC coast guard. 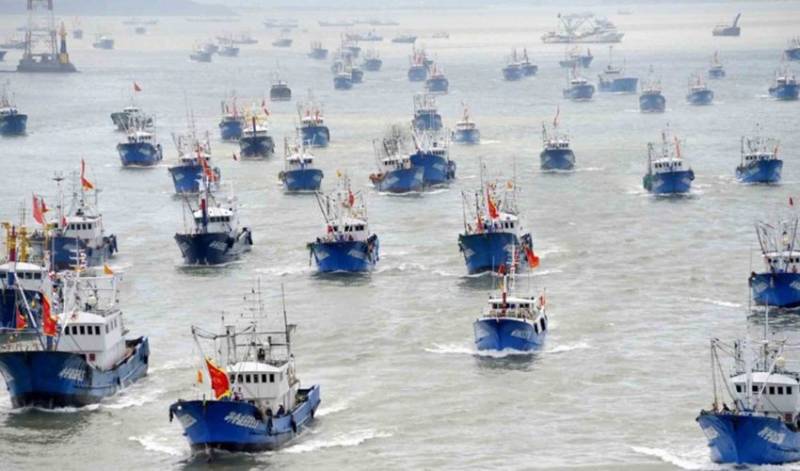 Photo: Contexto
In 2019, the Philippine army collided with an armada of 275 ships in the Sandy Cay area off Titu Island. Militia fishing trawlers entered the country's territorial waters and clashed with the Philippine military, which were forced to use a landing craft and marines to drive out intruders.

Such a strategy has become an absolute norm for China, and the "dark fleet" is even used to put pressure on countries allied to Beijing, such as North Korea (by the way, in 2020 alone, the Chinese have violated the border of the DPRK terrorist forces more than 3000 times - sometimes they are used to expel them. weapon).

China is actively seeking to adapt to the changed conditions of warfare, transferring it to the category of unlimited confrontation.

China believes that the "naval militia" can serve as a rather flexible tool for establishing its hegemony in the region. In Beijing's vision, such a strategy effectively avoids international sanctions, but at the same time is capable of fully satisfying the country's interests.

This is "hybrid" warfare - the use of asymmetric methods aimed at disrupting enemy actions without open hostilities.