Arctic truck KamAZ-6355 on the eve of testing and production 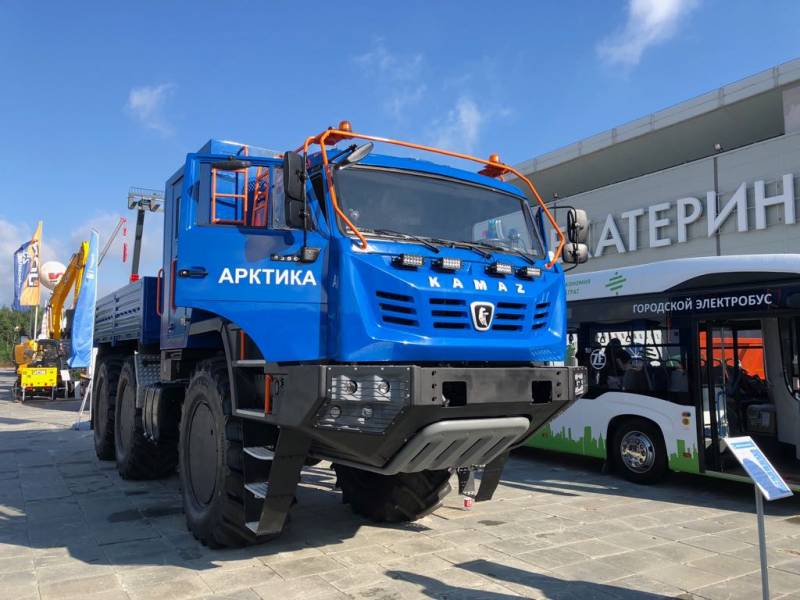 PJSC "KamAZ" announces the imminent start of a new stage of testing the promising wheeled platform KamAZ-6355. The four-axle truck has already been tested in the middle lane and now has to demonstrate its characteristics and capabilities in the Arctic. Based on the results of such tests, the real future of the new development will be determined.

Trucks for the North

In 2014, the state program “Socio-economic development of the Arctic zone of the Russian Federation” was adopted for the period up to 2020. It proposed a wide range of measures of various kinds, incl. creation of promising models of equipment capable of providing full-fledged logistics in the difficult conditions of the Arctic.

The development of a new automotive platform was carried out by the KamAZ enterprise in cooperation with the Department of Wheeled Vehicles of the Moscow State Technical University named after M.V. Bauman and Moscow Polytechnic University. The project was supported by the Ministry of Education and Science. Already in 2015, the first developments on the topic were presented, and in 2017, at one of the exhibitions, they showed a full-fledged prototype built on the basis of new solutions.

All-terrain vehicle (VTS) KamAZ-6345 "Arktika" was a three-axle chassis based on an articulated frame, suitable for the installation of various bodies or special equipment. All major units have been designed for cold climates. In the future, the KamAZ-6345 prototype passed the necessary tests at the sites of the developer plant. 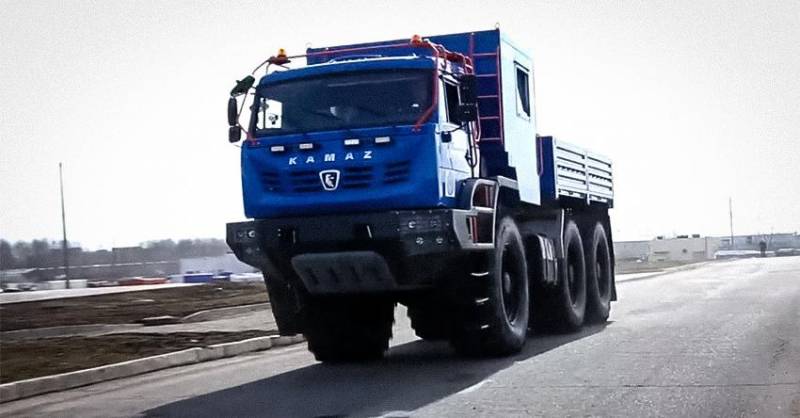 The design work on the Arctic theme did not end there. In 2019, a new prototype was presented, KamAZ-6355. It was a four-axle chassis based on already known solutions and some new ideas. Later, the second version of the "Arctic" was factory tested. Reportedly, inspections at the sites of the Scientific and Technical Center of the plant were completed successfully.

The other day "KamAZ" announced the imminent start of a new stage of testing. In June, KamAZ-6355 will go to the Yamalo-Nenets Autonomous Okrug, where it will be tested in real-life conditions. The experienced truck will have to show its driving characteristics on all landscapes and soils typical of the North. He will also have to confirm the calculated performance at temperatures down to -60 ° C.

Truck chassis "Arktika", KamAZ-6345 and KamAZ-6355, built using common solutions, but noticeably differ from each other, due to this, a different level of performance is provided. Thus, a three-axle truck with a total weight of 30 tons is capable of carrying 13 tons of cargo, and a four-axle vehicle weighs 40 tons and carries 16 tons.

Like its predecessor, KamAZ-6355 is built on an articulated frame with a hinge that provides deflection only in the horizontal plane at an angle of up to 45 °. This measure made it possible to ensure the maximum possible maneuverability and the minimum turning radius with a vehicle length of about 14 m. 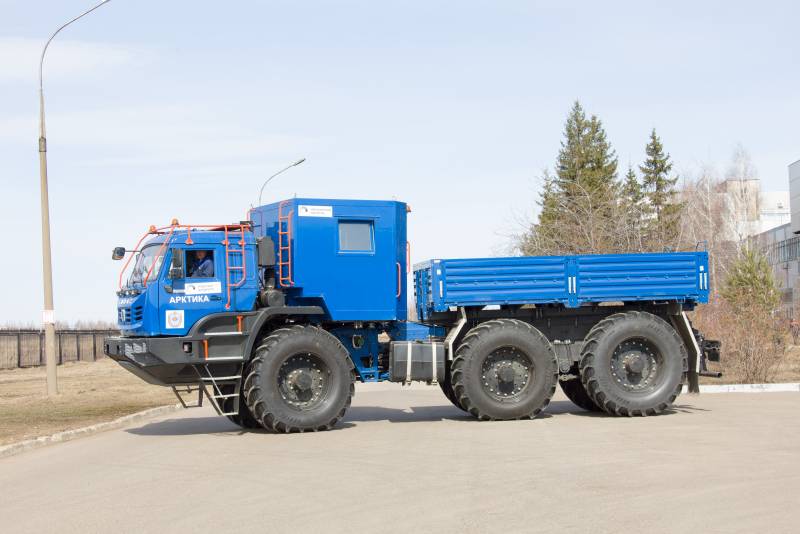 The eight-wheeled military-technical transport "Arktika" is equipped with a new-model KamAZ turbocharged diesel engine with a capacity of 450 hp. and an Allison automatic transmission. The transmission provides four-wheel drive. All units of the power unit and transmission have been modified taking into account operation at low temperatures.

The undercarriage is built on bridges based on one of the existing structures. The two front axles are mounted on leaf springs. The two rear axles are connected by rigid longitudinal balancers. Such a design of the undercarriage cannot show high performance in highly rugged terrain, but fully corresponds to the peculiarities of the Arctic.

Arktika is equipped with a K5 cab, which has already been mastered in other KamAZ projects. The ergonomics of the driver's workplace are determined taking into account the simplification of work and control of all processes. There is one berth at the rear of the cab. For operation in the North, an air conditioner and a heater of increased power are provided. There are also heaters for the windshield and side mirrors. 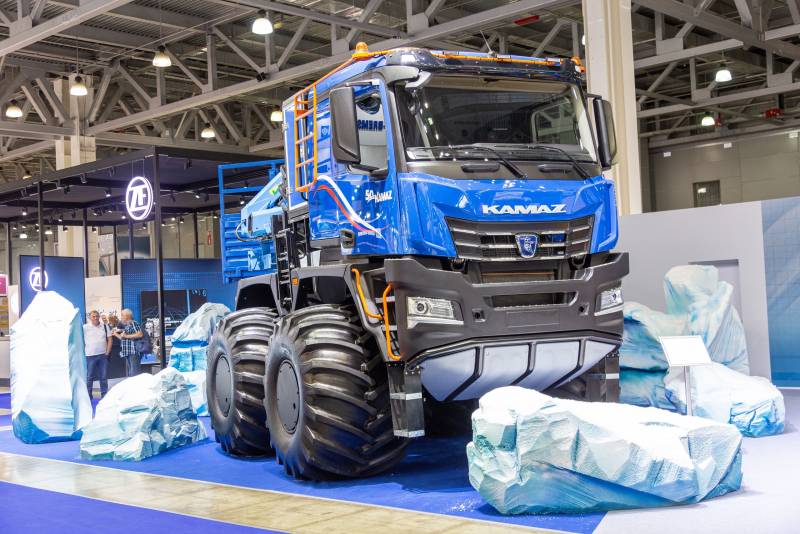 KaamAZ-6355 at Comtrans-2019
Behind the cab there is a spare parts container and a place for a spare wheel. Nearby there is a hydraulic manipulator "Inman" IM77 for working with loads. Maximum outreach - 6,8 m, lifting capacity - 1,1 tons.

Experienced VTS KamAZ-6355 received a side body. Serial cars can receive open and closed bodies, as well as vans for various purposes. In particular, a full-fledged residential module has been developed with an autonomy of up to 3 days. Installation of special equipment is possible - crane, drilling and other installations.

The length of the four-axle "Arctic" reaches 12 m, width - 3,4 m, height - 3,9 m. The ground clearance exceeds 600 mm. The curb weight reached 25 tons, the full weight - 40 tons. With such dimensions and weight, the car is capable of reaching a speed of 50 km / h. High mobility characteristics are provided both on public roads and on the northern off-road. The chassis is designed for travel on soft and compacted snow, swampy areas, etc. Slopes up to 30 ° and fords with a depth of 1,8 m are overcome. 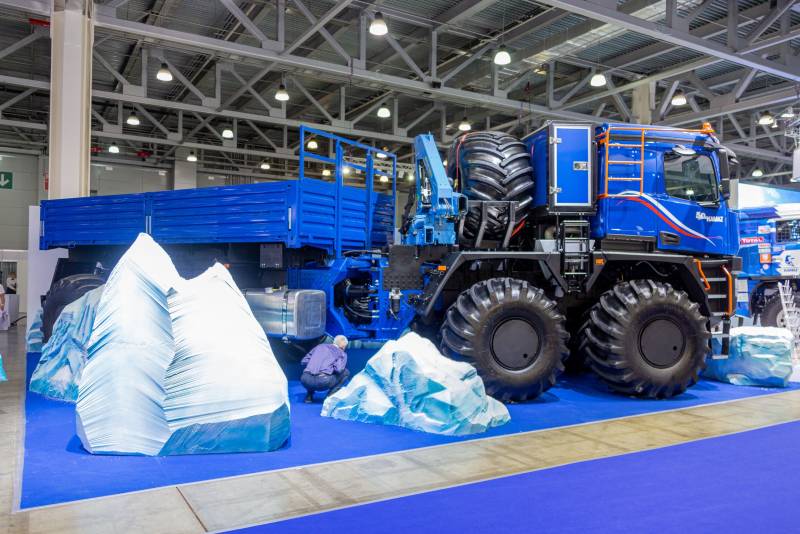 The development company disclosed the cost of the new technology. Depending on the model and configuration, the MTC will cost from 12 to 15 million rubles. As a result, "Arctic" becomes the most expensive product in the entire history plant "KamAZ".

The military, civilian and commercial structures are strengthening their presence in the Arctic and are implementing a number of important projects in the field of defense, infrastructure or business. The basis of the Arctic logistics is made up of heavy-duty trucks, and the successful implementation of the outlined plans depends on their characteristics.

In this context, the management of PJSC "KamAZ" notes that in our country now there are practically no wheeled platforms capable of transporting goods weighing 10 tons or more in harsh Arctic conditions. A number of trucks with similar characteristics exist, are being built and are in operation, but they have limited “northern” potential. Their design has only been modified for a cold climate, which softens operational restrictions, but does not completely remove them.

The current project "Arctic" is initially developed taking into account all the challenges and difficulties. The design of the machine as a whole and its main units are adapted to work in low temperatures. The chassis, including the pivot and undercarriage, are designed to be simple and efficient, as well as suitable for future use. 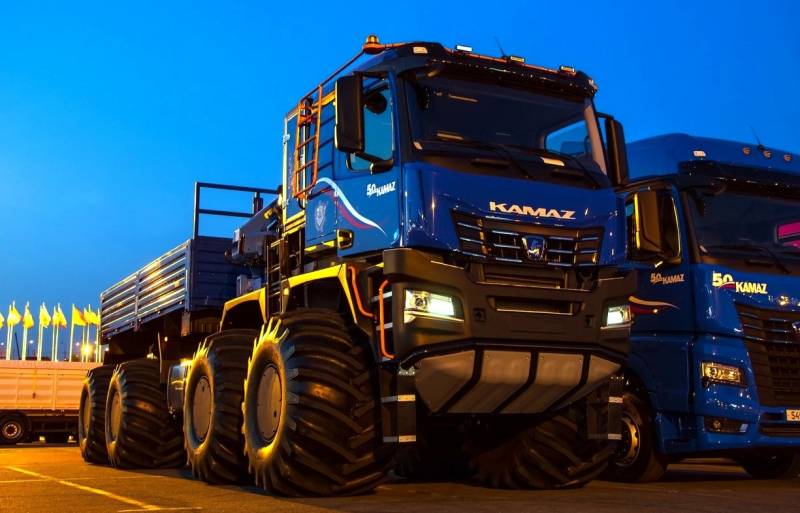 Thus, for the first time in domestic practice, not a specialized modification of a finished car was created for work in the Far North, but a completely new design with special capabilities. The positive consequences of this approach are obvious. The development company has mastered a new direction and acquired important competencies, and the industry and the army can now count on obtaining equipment that can work effectively in the Arctic.

However, for now, one should not rush and show excessive optimism. The KamAZ-6355 vehicle has already been tested in the middle lane, but has not yet demonstrated its capabilities in the regions of future operation. Tests of this kind will begin in the near future, and then the real potential of the technology will become clear.

It can be expected that future tests of the "Arctic" in a harsh climate will show the need for certain modifications of the design, but on the whole they will be successful. This will open the way for the two new wheeled platforms to serial production and subsequent operation in various organizations.

Obviously, the two types of "Arktika" will not be produced in a large series. The needs of the army and industry for such equipment are much less than for "ordinary" trucks. In addition, the cost of equipment will have some influence on the volume of orders. However, for a record price, the Kamsky Automobile Plant will offer customers a unique all-terrain vehicle with special capabilities - and the benefits from it will completely cover all costs.

Ctrl Enter
Noticed oshЫbku Highlight text and press. Ctrl + Enter
We are
Multi-axle rocket carriersProspects for the development of military vehicles for the period to 2020 g
Military Reviewin Yandex News
Military Reviewin Google News
36 comments
Information
Dear reader, to leave comments on the publication, you must sign in.