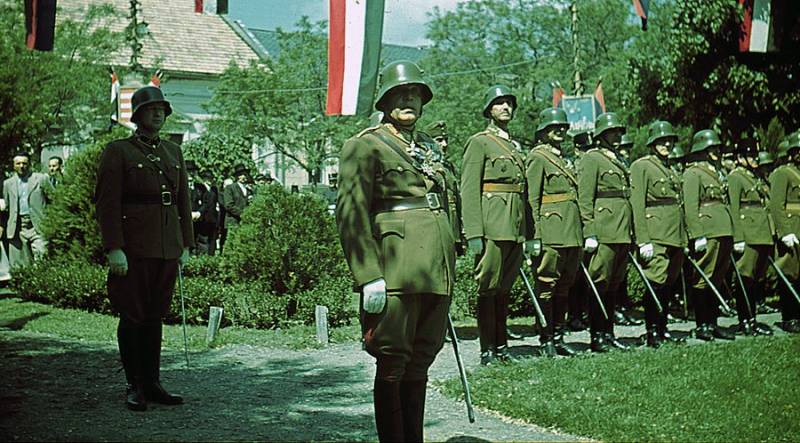 The Kingdom of Hungary was the oldest ally of the German Reich. Hungarian troops fought against Russia as part of the Austro-Hungarian army on the side of the Central Powers until 1918. The collapse of the Austrian double monarchy left behind a barely united Hungarian state.

More than 70 percent of its national territory has been amputated. And more than 3,5 million ethnic Hungarians suddenly found themselves under the sovereignty of the newly formed neighboring states. There are only 8,6 million citizens left in the country. Hungary was the biggest loser in the First World War. Restoring the borders of "Greater Hungary" became the doctrine of her new army.

Formed in 1919, the army initially consisted of 4000 officers, who, under the leadership of Miklos von Horthy, the last commander-in-chief of the Austro-Hungarian fleet, suppressed the communist revolution of Bela Kun. Thus, anti-communism became the second doctrine of the state, which clung to the fiction of the monarchy and was ruled by its "governor" Horthy.

The victorious powers imposed severe military restrictions on Hungary, similar to those of the Weimar Republic. In the 1920s, Budapest became a hotbed of the "right-wing international", which followed the example of first fascist Italy and then National Socialist Germany. Despite the difficulties associated with reparations payments and the economic depression, the leaders of the Hungarian army have been looking for opportunities for systematic rearmament since the early 1930s. Mussolini's Italy was ready to help, and later Hitler's Germany.

In early 1939, a feverish build-up of the Hungarian armed forces began. There were already 120 of them. Not long before this, the Axis powers had put pressure on Czechoslovakia to return southern Slovakia to Hungary. And in March 000 - after the occupation of Prague by the Wehrmacht - Carpathian Rus again became Hungarian territory.

Horthy, at first surrounded by the states of the French-backed Lesser Entente, pursued his policy with caution. In September 1939, more than 150 Polish refugees were allowed to cross the new Hungarian-Polish border, including tens of thousands of soldiers who traveled through Budapest to France, where they created a Polish army in exile. Berlin in the fall of 000 was more interested in "peace" in the Balkans.

But already at the beginning of 1940, there were plans for a possible German invasion of Romania, in which Hungary, of course, would be indispensable as a deployment zone.

Budapest has taken on its changing strategic role. Germany's friendly chief of staff, Colonel General Henrik Werth, mobilized his country to attack his hated neighbor. At the very last moment, on August 30, 1940, Hitler decided to divide Transylvania between Hungary and Romania. But the Hungarians were still not satisfied with this compromise. And throughout the war there were frequent skirmishes on the new Hungarian-Romanian border.

However, this giant step towards the restoration of Greater Hungary impressed military leaders who believed that in the future the Germans would give them priority over Romania.

Their urgent interest in modernizing the Hungarian army was met with restraint in Berlin. Hungary was still considered “unreliable”. And got planes Tanks and cannons from the gigantic arsenal of the captured weapons Germany, no different from what was transferred to Romania. Measures were taken to ensure that neither side had a noticeable advantage over the other, in order to avoid a potential invasion in any direction. Of course, the Hungarian industry was able to produce its own weapons under a German license and might even consider creating its own armored divisions.

But that was not enough by 1941 to wage any major war for a long period of time.

Therefore, the Prime Minister of Hungary, Count Pal Teleki, was extremely alarmed. When events in the Balkans reached their climax in the spring of 1941, he informed London and Washington that he hoped to keep his country from war.

Army leaders were more optimistic about the situation and could not escape pressure from Romanian Prime Minister Ion Antonescu's attempts to curry favor with Hitler. If Hungary wanted to defend its territories from Romanian troops, it could not lag behind in the arms race. Thus, she immediately demonstrated her willingness to take part in the German invasion of Yugoslavia.

Hungary made a commitment and was able to recapture Bacska, the Mur region and the Baranja lands with a total population of 1 million. Resistance from the local population was met with brute force, the victims of which were Serbs, Jews and even ethnic Germans. Desperate by these political events, Prime Minister Teleki shot himself on April 3, 1941. Three days later, Britain severed ties with Budapest.

By the spring of 1941, army reforms in Hungary were in full swing. The number of troops was increased, but the difficult economic situation did not allow significantly modernizing their equipment. On the other hand, the constant build-up of reserves lagged behind, as did the procurement of modern aircraft, anti-aircraft guns, tanks and anti-tank guns. The army tried to hide these shortcomings by intensive indoctrination of the troops. Army propaganda advertised its soldiers as the best in the world.

Although Berlin recognized the importance of Hungary as an indispensable transit zone in planning Operation Barbarossa, Hitler in December 1940 was still against Hungary's direct involvement in the war.

For a long time Horthy was not sure about Germany's intentions, but assumed that defensive measures along the border with the USSR would be useful to Berlin. A week before the start of the campaign against the USSR, Colonel General Werth insisted on an official proposal from Germany to take part in the war against the Soviet Union. However, the new prime minister Laszlo von Bardossi was worried that his country might split its forces in the face of hostile neighbors (Romania and Slovakia).