August 31 2012
1
The possibility of deploying submarines of the Kyrgyz Republic (cruise missiles) intended for firing along the coast was investigated in Germany at the end of World War II. Work in this direction in the USSR was begun in 1946. A group of specialists led by Vice Admiral Goncharov, on the basis of studying the experience of German specialists, as well as using some domestic developments, chose three main directions for developing missile weapons for fleet: ballistic, cruise and anti-aircraft missiles.

The American naval forces in 1955 took on a cruise missile “Regulus-1” with a maximum range of 400 km, under which the diesel-electric submarine “Tanni” (type “Balao”) was converted. The launch of this subsonic rocket was carried out from the surface position. The use of radio command guidance system was associated with the need to attract surface specials. ships or submarines, which should provide guidance of missiles in the final segment of its trajectory. In this case, only targets that were located at a short distance from the coast were fired upon. All these facts significantly limited the combat capabilities of the US complex. As a result, the Regulus-1 cruise missiles in 1958 were removed from service. Work to create a more advanced supersonic cruise missile “Regulus-2” was also stopped.

However, in the Soviet Union there was a different attitude to sea cruise missiles. In the second half of the 1950-s, these weapons were recognized as very promising.

The development of sea cruise missiles, which were intended to hit targets on the coast, was conducted by the Lavochkin Design Bureau (P-40), Ilyushin (P-20) and Beriev (P-10). To equip nuclear submarines with cruise missiles (SSGN) of the P-627 project and the 653 project, a powerful P-20 supersonic rocket was created. But attempts to place cruise missiles on the boat with the traditional approach to solving design problems caused the launching equipment of the submarines to be overly cumbersome and heavy. As a result, the SSGN carried only one or two missiles (the P-20 cruise missile concept was justified only by long-range firing - about 3,5 thousand km, which was significantly higher than the range of other strategic means of the Navy).

V.N. Chelomey chose another way to solve the problem, and proposed to place a relatively light cruise missile having folded wings in the launch canister. This was made possible by creating an original wing disclosure machine, which was triggered after the rocket left the container. As a result, the startup process has accelerated and simplified. Now it is possible to increase the submarine’s ammunition several times while maintaining the displacement.

The command of the Navy and S.G. Gorshkov, the new Commander-in-Chief. Examination conducted with the participation of academicians M.V. Keldysh, A.Yu. Ishlinsky and A.A. Daroditsyna also gave the project a positive assessment. As a result, they made a government decision on the formation of OKB-52 under the leadership of Chelomey in Reutov near Moscow (the decree of 19.06.1955). V.N. Chelomey was entrusted with the development of the P-5 cruise missile, which has an 350 km range.

Initially, the P-5 was intended for retrofitting diesel-electric submarines, competing with the "Berium" P-10, which was an analogue of the American "Regulus-2". 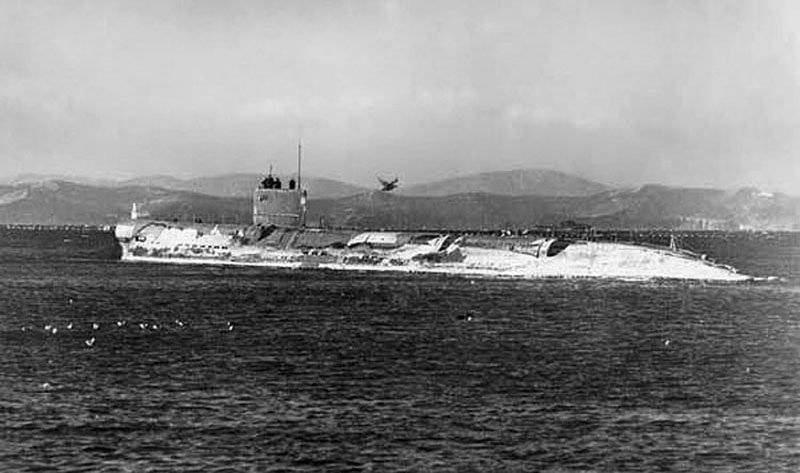 The SSGN project 659 goes to sea

12 March, 1957, the first launch of the P-5 cruise missile in the White Sea from the swing stand CH-49 took place. The November 22 rocket was launched from the side of the experimental submarine C-146 (the converted submarine of the 613 project). As a result of comparative tests, preference was given to the "cheleomeevsky" complex, which 19 of June 1959 of the year officially accepted for service. This missile was equipped with 6 boats of the 644 project (two rockets) and 6 of the 665 project (created on the basis of the 613 submarines, four missiles).

However, for reliable destruction of targets in the United States, which had powerful anti-submarine forces, it was advisable to place strategic missile weapons on less sensitive than diesel-electric submarines, carriers - nuclear submarines.

The development of those. the project of the submarine missile carrier 659 of the project with cruise missiles P-5 was carried out in accordance with a government decree of 26.08.1956.

Chief Designer of the project P.P. Pustyntsev, which was replaced by N.A. Klimov. Chief observer from the Navy Yu.S. Wolfson.

Simultaneous work in the same design bureau on “strategic nuclear-powered ships” (with ballistic and cruise missiles) assumed the maximum unification of the general shipable ones. making. At the same time, the 658 and 659 projects “grew” from the torpedo nuclear submarine of the 627 project.

At a meeting of the Presidium of the Central Committee of the CPSU 19.10.1957, the construction of the Russian submarine missile-carrying fleet was reviewed. Approved a promising plan for the construction of submarines, according to which, by the year of 1961, it was intended to transfer submarines of the P-32 to the 5 Navy. The continuation of the creation of data carriers of missiles was planned in 1961-1965 - VII five-year plan.

The construction of the boats was launched in Komsomolsk-on-Amur (nuclear submarines with cruise missiles from the 659 project were the first nuclear-powered ships that were built in the Far East). K-45 - the lead ship - was laid 28.12.1957, launched 12.05.1960, and the acceptance certificate was signed 28.06.1961. The first commander of the boat was appointed captain second rank VG Belasheva. K-45 under his command successfully passed the tests, which ended with a long autonomous voyage. During the test, the submarine passed 7073 miles, of which 2569 miles were submerged.

The submarine became part of the Twenty-sixth Division, which became the first compound of the Pacific Fleet equipped with nuclear-powered ships.

The submarine had a two-hull architecture. The 6,8-meter rugged case was divided into nine waterproof compartments. The design provided surface flooding when filling in any of the compartments.

The ship was equipped with a main power plant with a rated power of 35 thou. Hp, which included two water-cooled reactors VM-A (each with a power 70 mW). There was a pair of battery groups each for 112 elements, a pair of 450-strong PG-116 sneaking electric motors and a pair of DG-400 DC diesel generators.

There were the MG-15 noise-detector, the Arctic-HAS MG-200, the MG-13 hydroacoustic exposure detection station, as well as other target equipment.

The submarine’s missile armament consisted of 6 CU P-5. The missile had a nuclear warhead, unified with the combat part of a ballistic missile R-11FM (its power was initially 200 kilotons, then it was increased to 650 kilotons). The hull diameter of the cruise missile was 1000 mm, length - 10800 mm and wingspan - 3700 mm. The launch mass of the rocket was 5200 kg, the maximum flight speed was M = 0,9-1,0, the maximum firing range was 350 km. Flight altitude - 800-900 meters. The propulsion system of the cruise missile included a starting solid-fuel accelerator and a cruise turbojet engine KRD-26 (2250 kgf). The control system included an autopilot, a barometric altimeter and a time counter.

The missile on the submarine was transported in an airtight container of length 12 m and diameter 1,65 m, filled with nitrogen. The rocket was prepared for launch from the control panel remotely. The control panel was located in the first compartment of the submarine. The lifting time of the container to the firing position (14 degrees) was 125 seconds. The containers were placed three on one side in the superstructure. The launch could be performed exclusively from the surface position at a speed of less than 8 knots and waves of the sea to 5 points. 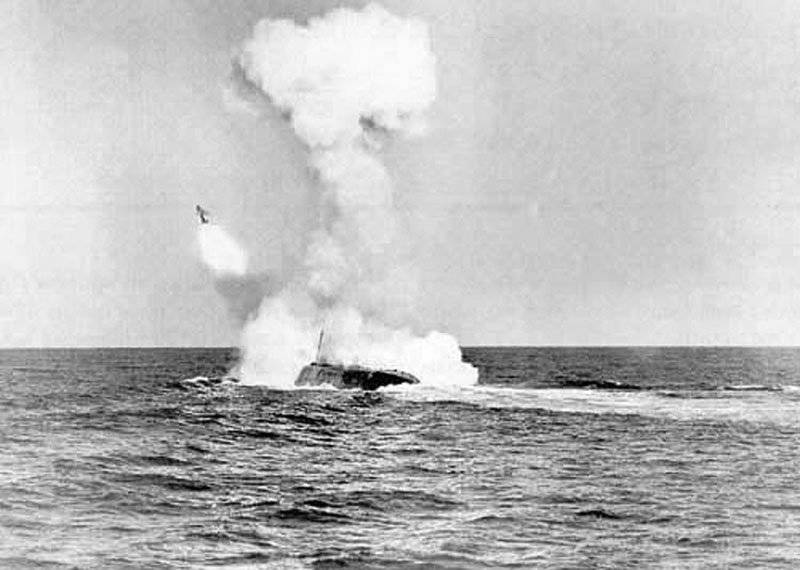 Launch of P-5 missiles from SSGNs 659

The 659 rocket carriers of the project conducted a service on the Pacific Fleet. Within the zone of reach of the missiles of these boats were targets on the West Coast of the United States (where, in particular, were the largest aircraft factories of the Boeing company in Seattle, as well as other important military, industrial and administrative centers); in Japan, on the Hawaiian Islands, the Panama Canal. Probably nuclear submarines with cruise missiles of the 659 project were considered as promising ships for arming the young Chinese Navy (however, the cooling of relations between the USSR and China at the beginning of 1960 interrupted military cooperation between the great powers for several decades).

Comparing the characteristics of the “main caliber” of Project 659 submarines and the air defense capabilities of the main probable enemy, the United States, it must be recognized that P-5 missiles at the turn of the 1950s and 1960s had very high chances to destroy assigned targets. The most powerful American anti-aircraft zonal air defense missile system of that time, Nike-Hercules, was able to deal with air targets whose flight altitude was more than 1500 m, and the firing range of the low-rise complex Hawk did not exceed 18 thousand m, which made it possible to cover with data rockets only a limited number of objects. The American fighter had very modest capabilities in the fight against the P-5 aviationbased on subsonic fighters that were not able to fight targets whose flight took place at an altitude of several hundred meters at a transonic speed. Second-generation supersonic fighter interceptors - F-101B, F-102, F-104 and F-106, which began to be adopted by the U.S. Air Force in the late 1950s, could only destroy air targets flying with their guided missiles at large and medium altitudes, which made these aircraft practically “harmless” for P-5 cruise missiles. 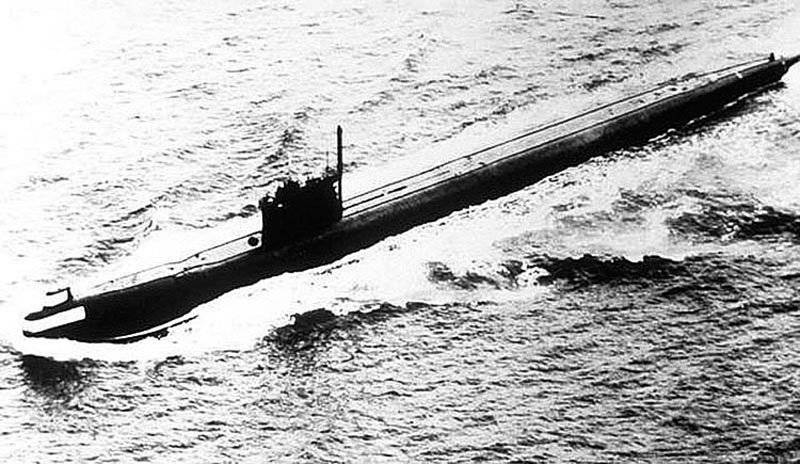 But the projected improvement of air defense required and increasing the capabilities of cruise missiles. In 1958, the development of the P-5D began, which included a Doppler velocity and angle meter, which increased the accuracy of the fire two to three times (amounted to 4 thousand meters). Maximum firing range increased to 500 km. P-5 02.03.1962 was adopted. In 1959, they began to create a P-5СН cruise missile with a radio altimeter (which made it possible to reduce the altitude to 300 — 400 meters, which was practically inaccessible to the interceptor fighters used at that time). Work was also being done in the area of ​​reducing radar visibility (this is today called “stealth” technology). The complex of these measures was to significantly increase the combat capabilities of the complex, ensuring its ability to overcome the American air defense system. However, the fundamental shortcoming of cruise missiles - the surface launch, which increases the carrier's vulnerability - could not be eliminated. As a result, in 1964, it was decided to abandon strategic cruise missiles, leaving them in service with submarines only as a “secondary” weapon, which complements the P-6 anti-ship operational missiles, created under the leadership of Chelomey.

Due to the technical impossibility to re-equip the SSGN of the 659 project with a new anti-ship missile complex, it was decided to convert the SSN data into torpedoes. From August 1965 to the end of 1969, all submarines of the 659T project (made in TsKB-18 under the supervision of Chief Designer O.Ya. Margolin) were converted into torpedo nuclear submarines at the SRZ in Bolshoy Kamen near Vladivostok. Missile armament was removed, stitched cuts in the light case, and the antenna of the radar control stations for missile firing "North" was dismantled. At the same time they increased the torpedo armament of submarines.

PLA K-66 in 1980 year after the accident was put on conservation. There was a fire on K-122 21.08.1983. As a result, 14 people died (they decided not to restore the submarine). All nuclear submarines of the 659T project in the 1990-s were removed from the fleet, after which they were transferred for recycling.
Military Reviewin Yandex News
Military Reviewin Yandex Zen
1 comment
Ad