The trial of Rear Admiral Nebogatov 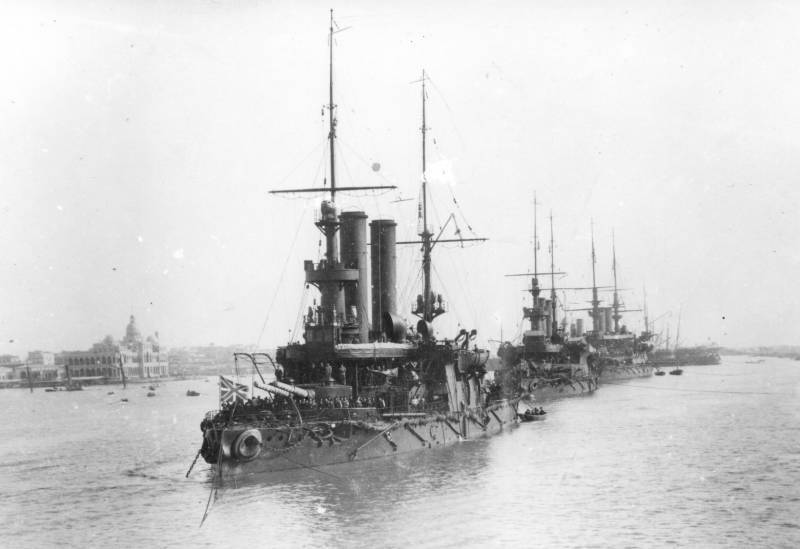 The Russo-Japanese War was going on.


The First Pacific Squadron was blocked at Port Arthur. The Vladivostok cruiser detachment lost the Rurik in Tsushima. On land, defeat followed defeat, and the Baltic Fleet (more precisely, its combat-ready part) came to the rescue under the name of the 2nd Pacific Squadron. But it soon became clear that there was no hope for the Pacific, and the 2nd TOE itself was unable to defeat the Japanese. We need reinforcements. There was hope for exotic cruisers (armored cruisers of Argentina and Chile), but it did not materialize. And then it was decided to send what is capable of reaching the Far East in the Baltic.

In general, the choice was not great - two outdated ramming battleships, armored (and outdated) cruisers "Memory of Azov" and "Vladimir Monomakh", an outdated armored cruiser "Admiral Kornilov" and three battleships of coastal defense, new, but rather worn out and unsuitable for long-distance transitions.

The selection was based on the principle that what is on the move will go. So the ancient ram "Nicholas I", three coastal defense battleships and the armored frigate "Vladimir Monomakh" were included in the 3rd Pacific Squadron. The rest were in need of repairs. And the last battleship of the Borodino class - Slava - is under construction.

They did not wait for anyone (and thank God). And the detachment, called the squadron to fear the foe, went on a campaign. For a long time, however, they could not find a commander - the admirals shied away from such an appointment as the devil from incense, for obvious reasons. But in the end it was Rear Admiral Nebogatov, either not very smart and wanting fame, or weak-willed and unable to fight off the authorities, who ordered to kill themselves against the wall, in the sense of catching up and finding Rozhdestvensky's squadron in the ocean, and if it doesn't work out, break through to Vladivostok on your own.

The detachment left. Moreover, I caught up and found it. Although the frantic Zinovy ​​himself was sharply opposed, believing that with such reinforcements it would not be long to lose. Slow, outdated, or with artillery fired upon, unsuitable for ocean crossings, they were not help, but rather a weakness and a weight on their feet.

Be that as it may, on May 14, Nebogatov led his squadron, renamed 3-1 armored detachment, in the tail of the column, with a clear task - to act independently. However, on his own, apart from following the first and second armored detachments, he did nothing. Even after seeing the death of "Oslyaby" and knocking out of "Suvorov", he did not take command, waiting for an order (either from St. Petersburg, or from the Lord). And after Rozhestvensky, rescued by the destroyer "Buiny", handed over the command, he did not think of anything smarter than to rush to Vladivostok by the shortest route.

Given that his ships received minimal damage, most of the main forces, including his own coastal defense battleship Admiral Ushakov, could not keep up with him. And on the morning of May 15, the Japanese met five ships - the Nikolai I battering ram, the battered Eagle, which by some miracle did not lag behind the new commander, two Senyavin and Apraksin missile cruisers, and the Izumrud light cruiser.

Seeing the united fleet, Nebogatov ordered to raise the white flag, declaring that he was saving the sailors. Only the "Izumrud" did not obey, breaking past the Japanese to the shores of Russia, but, alas, did not reach Vladivostok.

As a result, the Japanese received four ships, two of which managed to take part in the Sakhalin operation (BBO) and shoot at the Russians. Nebogatov himself, returning from captivity, gave an interview to the British media, in which he thickly smeared his commander, ships, crews and Russia with a known substance, instantly becoming the idol of the liberal public of that time. 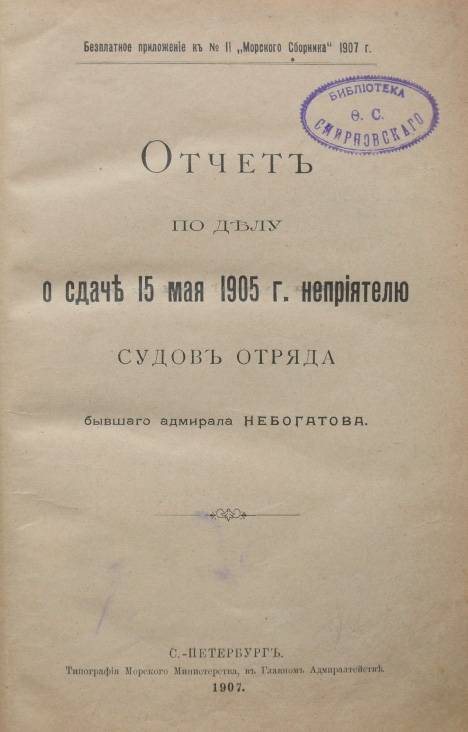 The strangeness begins already with the name - Nebogatov did not hand over any detachment, he surrendered the Second Pacific Squadron, the command of which he took on the evening of May 14.

Strange and accusations - in addition to surrender, a minimum of official negligence was shown, as a result of which the squadron disintegrated and was finished off by the enemy in parts. And going to Vladivostok in those conditions is such an interesting form of suicide. I'm not even talking about the daytime battle: unwillingness to take command and understanding the order to "act independently" like walking at the end of the column and not giving any orders even to your detachment is at least a reason for serious investigation.

1) If the enemy turns out to be ahead and to the right of the course, then at the signal (...) the main forces go to him to accept the battle, supported by the III armored detachment and the cruising and reconnaissance detachments, which seem to act independently, in accordance with the conditions of the moment ...

In the event that the enemy meets while the squadron is following, in the afternoon, in marching order, I prescribe to be guided by my order of January 22 of this year. No. 66 with the following addition: I

The II armored detachment, maneuvering at the signals of its flagship, in all cases rushes to join the main forces, increasing the course for this as much as possible with the available number of boilers, and breeding pairs in the rest.

If the enemy in large forces appears from behind, then he must restrain his onslaught and cover the transports until the arrival of the main forces.

The procedure for maneuvering a detachment to the right, left, forward or backward from the marching formation, depending on the place of appearance of the enemy, has now to be developed and announced by the commander of the III armored detachment.
More precisely - as many as two orders. But there was no order of maneuvering, no signals from Nebogatov. He just walked, doing nothing, which for some reason did not interest the court.

If you state the claims of any sane person, then this is briefly:

1. Complete lack of initiative in battle.
2. Flight from the battlefield in the evening.
3. Absence of even the slightest attempt at an organized retreat.
4. Surrender.
5. Slander against the commander.

They tried only on point four.

It was an interesting trial.

First, the "savior of the sailors" said ... that he did not hand over the squadron, and the detachment did not hand over, but handed over only his flagship, "Nicholas I", the rest, they say, "all by ourselves." Then, that he did not have enough time to prepare the sinking of the ships (more than an hour, probably, the admiral planned to fill the water with children's buckets). And then - that, in fact, he only suggested, but the officers' council made a decision, it has nothing to do with it.

The commander and staff members echoed it. So, Lieutenant Sergeev said that his will and memory were paralyzed. Which, however, did not prevent him from remembering that the team cried with emotion and thanked Nebogatov. Apart from Sergeev, however, no one noticed this. Rather, the opposite, but that's okay. The rest behaved much more decently. And a wild picture emerges from their testimony: so the signal of surrender was raised BEFORE the officers' council.

And the wild circus in court continued. And not only on the part of the accused, as can be understood, the death penalty was imposed for surrender. But also from the side of the prosecutor Vogak.

So, he tried to bring under the article the officers of "Emerald" ... for failure to comply with the order to surrender and not enter into battle with everything Japanese fleet... It didn't work out, really. And the chief of the cruiser notably protrolled Vogak, who, as it turned out, sincerely did not understand the difference between a cruiser and a battleship, while leading the accusation in the process of military sailors. In the last word, Nebogatov mocked the prosecutor and turned on the liberal again, starting to petition for the crews of his ships ... which were not in any danger anyway.

The verdict is also interesting - the death penalty for Nebogatov and the commanders of his ships (in addition to the "Eagle", which was incapable of combat) with an appeal to Nicholas II with a request to replace the execution with a ten-year term. Nikolai replaced.

And Nebogatov was in prison for only two years.

Two years in four surrendered and six abandoned and lost ships that terrible night. Thousands are at the bottom, thousands are disgraced, and two years in prison. 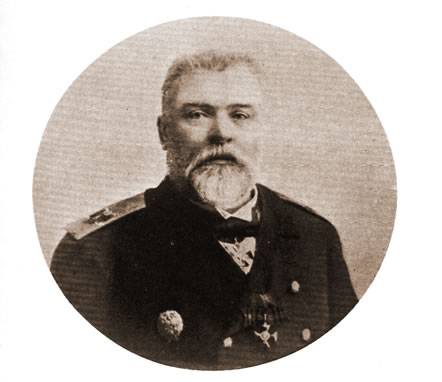 What happened is understandable - an elderly man, who never believed in victory and had never been in battle, fell into a panic in front of responsibility and rushed to carry out the last order of the commander, without even thinking about the consequences and nuances.

In the morning, realizing what he had done and that he would die under fire, he decided to surrender. For, again, it won't get any worse. If he hadn't even raised the white flag and survived, questions would have arisen ... Up to the tribunal - so what?

In captivity, on the other hand, after a little reflection, he decided to get an acquittal, taking advantage of the internal political situation, which he partially succeeded. It turned out because a revolution was taking place in Russia. And the rampant liberalism.

And our society, progressive beyond measure, has always hated the army and navy. And then such an admiral, all in white, comes out and begins to angrily denounce the "tsarist satraps" and "stupid boots" in the progressive English media and in the courtroom, along the way telling how he saved the "oppressed sailors" lives. Still, Nikolai Nebogatov was the smartest person, it is a pity that he used his brains in the wrong place.

The public warmly supported Nebogatov, according to the principle of Russian Westernizers: whoever is with us is a saint. And as a result, the court had to violate the law for the sake of domestic policy.

Then the myth took on a life of its own. Having received a powerful foundation in Soviet times, it still exists today. Like, the poor admiral, with a suppressed will, in a desperate situation, saved the sailors. It is true that it remains outside the brackets - who made this situation hopeless? What about the crews of the stragglers who died from Japanese shells and torpedoes? And what about the inhabitants of Sakhalin, killed by the shells transferred by Nebogatov to the enemy in full serviceability of the ships? Or, as they like to say these days, "is this different?"

A case like days gone by. An abyss of time has passed from Tsushima. The other day was the 116th anniversary of the battle. But the shame remained.

And there was an example: this is possible. In the sense: to fill up everything, and then, having hit the trend, become a hero. And this is annoying even after a couple of epochs.

It means that many do not understand some historical truths, which means that they can be repeated.