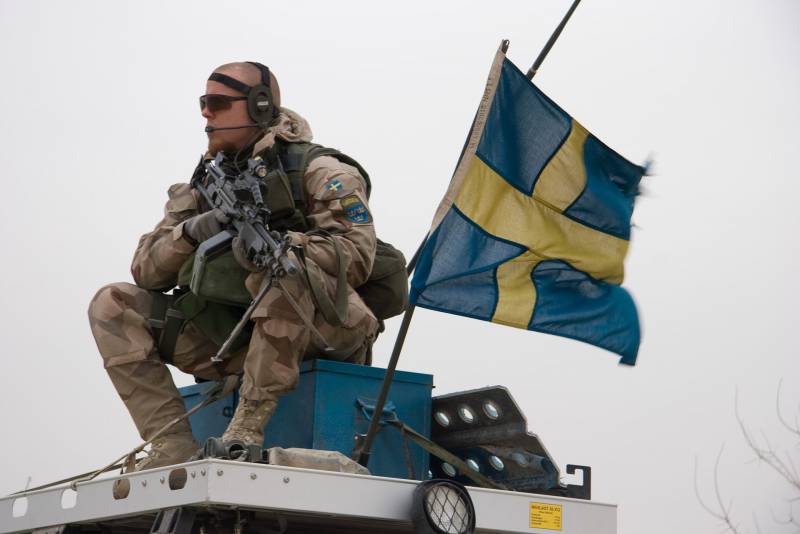 The most popular morning newspaper in Sweden, the Dagens Nyheter tabloid, published a short interview with the commanders of the Swedish Armed Forces - the Army, Air Force and Navy. It was dedicated to the defense financing plan for 2021-2025 approved by the country's parliament, which provides for a significant increase in appropriations - from 66 billion kronor this year to 89 in 2025. Of course, all these increases are justified by the “Russian threat” and the general “complication of the situation” in the world, especially between the nuclear superpowers.

Well, the commanders, too, in general, did not forget the Russians, and to their joy, like Ostap in the "12 chairs", they were carried away. Thus, the commander of the Air Force, Major General Karl-Johan Edström, very boastfully declared:

"Our potential is enough to create military problems even for such a powerful adversary as Russia."

He stated this after a seminar organized by SAAB on the topic "Who controls the Baltic Sea", where the military leaders of Sweden participated. True, he did not explain what kind of powerful potential Sweden has in order to really "create problems" for the RF Armed Forces. At the same time, he noted that the Armed Forces of the Russian Federation are conducting more and more exercises in the adjacent regions, their scale is constantly expanding, and they are seriously complicated in terms of the solutions being worked out. He noted that

"We can use the opponent's vulnerabilities in our own interests, and this is what we will work out during the exercises, developing our skills."

And for this they need to "build up their strength."

The rest of the commanders also did not clarify what kind of potential Sweden has, which cannot be found in reference books, capable of creating problems for the RF Armed Forces. At the same time, none of them mentioned, in fact - why did Sweden surrender to Russia at all, and what is the apparent, supposedly threat from Russia expressed in? They limited themselves to references to the Five-Day War, Crimea, Donbass, Syria - but it is not clear, but Sweden has something to do with it? Russia has neither territorial claims to Sweden, nor even common borders. And even the Swedes are not included in alliances hostile to Russia. Or are they already in?

A harmful friendship with NATO

No, Sweden is not going to join NATO, and the population, despite the fables about the Russian threat, is against it. But on the sly, the Swedish leaders are already, very unwisely, by the way, dragging their country under the possible "distribution of elephants" by the Russian Federation, establishing cooperation with the alliance.

Naval Commander Eva Skoog Haslum said in an interview with the publication:

“Under no circumstances will we be able to stay away from the conflict between NATO and Russia, if it happens not far from us, we will certainly be drawn into it. Our important task is to think over a plan of action in this case and prepare. "
For some reason, in the first two world wars, no one dragged the Swedes anywhere, but it certainly would have happened in the nightmare stories they are telling now, if, of course, they are going to continue to remain neutral.

The Swedes are participating in joint exercises with the United States, NATO in northern Europe, with Norwegian and Danish neighbors, as well as with Finland, which is also neutral. More precisely, Finland is much more neutral than Sweden, which is always afraid of Russia. Apparently, in Stockholm, more than 200 years from the last Russian-Swedish war, they cannot move away, when the country lost Finland and the last hopes for a significant role in the region, and became neutral.

Just the other day, the American Air Force was allowed to enter Swedish airspace in order to make an airborne landing in Estonia during exercises. The same one, during which 10 people were injured, and the British press now writes that the Russian electronic warfare allegedly tried to suppress communications during the landing. But she, you see, "did not work."

From neutrality to trouble

In fact, the Swedish defense stratagem “out of alliances in peacetime to remain neutral in war” is a thing of the past. The Swedish parliament now believes that Swedish troops should

"To defend Sweden from armed attacks alone and with other forces, on and outside Swedish territory, while safeguarding security, freedom and independence."
It is strange that the Swedish army, based on this formula, is not yet at war with bearded "refugees" on its territory, otherwise there is a natural war going on here and there, and the police are simply afraid to poke their heads into many areas.

The Swedes now believe that the task of the armed forces is to prevent war by raising the military threshold that a potential enemy, or more precisely, Russia, will have to cross if he decides to go on the offensive. They say that the fear of high losses will keep the enemy. And in this matter, the commanders of the ground forces, the air force and the navy are full of self-confidence. However, if you listen to their words, then their confidence is based on little.

The Air Force Commander of the Kingdom says so:

"The Army, Navy and Air Force together can create a concept for all levels of conflict - from the intended armed attack, preparation for battle, exit to the scene of conflict, to the transition to a clash on Swedish territory."
Excuse me, gentlemen, but what, you didn’t have any concepts, doctrines, operational plans before? Or were they, but everyone had their own? Is it like in the Japanese Empire, where the navy and the army had their own air force, and their own industry, and did not tolerate each other?

However, what do we want from Sweden - until recently, the commanders of the Armed Forces did not even have their own headquarters there, they were recently restored after decades of absence. And the Swedish army itself has passed a very winding path from the 80s to the present. The path from a fully conscript army to a territorial recruitment model in the 80s and 90s, when reservists are kept at home weapon and ammunition, and should appear in the next part for classes, gatherings or for mobilization - this model was popular among neutral countries, the army turns out to be small in peacetime, and in wartime - quickly mobilized and very large. However, this model has a lot of disadvantages, and in an amicable way, in a collision with a serious power, such an army has not very many chances. But it looked very formidable - in 1995, little Sweden, in theory, could deploy 15 brigades of "maneuverable" (that is, equipped with relatively normal equipment and weapons) forces and 100 battalions of "auxiliary" forces (territorial troops, to protect , escort service, etc.).

Then the Swedes followed the path of massive reductions in mobilized structures and the gradual transfer of the peacetime army from the conscription system to selective conscription. By 2010, they switched to it - 2 battalions (!) Remained from the maneuvering forces, 4 companies from the auxiliary forces, and it was supposed to mobilize this "horde" in 90 days! That is, in fact, the country could be taken with bare hands - if someone needed it. It is not needed now, however, to anyone except the Islamists who have come in large numbers. By 2019, Sweden, having rushed to the other extreme, completely switched to the volunteer (contract) principle of formation - with 7 battalions of maneuver forces and 14 - auxiliary ones, after a week of mobilization. In fact, that 90 days, what a week - if the war is started suddenly, by a country with powerful forces in peacetime, it is no longer possible to start mobilization. Now the Swedish leadership, seeing that the Swedes are not eager to become contract soldiers, and even these scanty forces are poorly staffed, decided to go on a second round. A selective draft was introduced in addition to the contract. They expect to increase the size of the peacetime army from 30 now somewhere up to 55 in 2025, and the maneuvering forces after mobilization should number 3 brigades. There is no data yet on auxiliary forces and the timing of mobilization.

In general, it is not so important how many peacetime army Sweden has in size, and what forces it is supposed to have in wartime. If the Swedes really want to play a war with Russia, then we hasten to upset them. With an Air Force numbering less than a hundred, rather mediocre Gripen fighters, without attack helicopters, with reserves of only 120 tanks, 350 infantry fighting vehicles and 300 armored personnel carriers, less than a hundred self-propelled guns and self-propelled mortars, having weak air defense - it is still unrealistic to equip large forces with something other than small arms, and the existing serious enemy, if he suddenly appears, will instantly flatten, and no terrain and prepared shelters will not help. This is if there is no decision on the use of TNW. Formally, there are no grounds for this, but this is now, and if Sweden continues to drift towards NATO, they will immediately appear. Even a NATO member, Norway, does not plan to seriously resist Russia in a big war, but they are strenuously trying to force it and put it under attack, despite the resistance. And here the Swedes themselves run into trouble. Apparently, they forgot the experience of wars 200-300 years ago.

"Poles" from NATO will not help the Swedish "son"

Meanwhile, even the highly biased American analysts at the RAND Corporation have outlined very bleak prospects for NATO in the event of a major conflict with Russia. Based on the results of their modeling, they came to the conclusion that the thinning stocks of NATO TNW (that is, the very hundred B61 bombs at bases in Europe - there is no other) are in no way a deterrent to Russia in the event of a war. In their opinion, the European NATO countries will suffer much more than Russia in the exchange of tactical nuclear weapons strikes in the European theaters of military operations. RAND believes that Russia is most likely to strike first of all at air bases, warehouses, and accumulations of NATO troops, which will immediately change the balance of power in its favor. And retaliatory strikes by NATO tactical nuclear weapons will inflict only limited damage on the RF Armed Forces.

It is worth, of course, to agree with this very sober conclusion, which is a rarity for today's Western analysts, including, unfortunately, the influential RAND. But I would like to clarify a couple of points. The fact is that it is still a problem to deliver US TNW in the form of air bombs to targets, and very few of its carriers will actually reach the drop points, taking into account our air defense. And vice versa: a strike in the form of hundreds of quasi-ballistic and cruise missiles of the Iskander-M complex, hundreds of Caliber missiles, supersonic (and now hypersonic) nuclear-armed anti-ship missiles, as well as other various carriers, will also be a problem to repel. For NATO, it is insoluble. And the Russian TNW arsenal is estimated by analysts in the West from 2,5 thousand (combat-ready) charges to 6-8 thousand in total. And there can be no talk of an adequate exchange of TNW strikes, given that the United States has a little more than a couple of hundred combat-ready bombs left in all B61 bombs. And there is no other weapon. Only strategic, and this is already a completely different gloomy alignment.

So, Sweden to seek help and, on the contrary, try to provide help to the "Llahams" from NATO, in general, is unhealthy. Poltava and Gangut with Grengam will seem like a matinee in kindergarten. Where are you going, gentlemen?