24 May 2021
28
Astronautics is one of the young and promising branches of science. Both the USA and the USSR took the first steps, which were sometimes accompanied by erroneous decisions that made it possible to resolve momentary and short-term problems, but in the long term led to a dead end and to victims, as happened in the USA with the use of 100% oxygen environment, which provoked the Apollo fire. 1 ”and during an attempt to abandon the rescue suits during the take-off / landing stage on the Soyuz spacecraft. After the tragedy of the Soyuz-11 spacecraft, the question of the urgent need to develop a rescue suit for the Soyuz spacecraft arose.


Since the use of a rescue suit according to the OKB-1 documentation (at that time TsKBEM) was not envisaged on the Soyuz ships, the task was set to develop new equipment in the shortest possible time, combined with the individual lodgings of the shock-absorbing seats used on the ship, with minimal modifications to the descent vehicle.

Problems when choosing a spacesuit for the Soyuz spacecraft

The piquancy of the situation was that none of the previously created spacesuits (SK-1, "Berkut" and "Yastreb") were suitable for this purpose. they were either designed to protect the astronaut outside the spacecraft, or could not be combined with the Kazbek shock absorber seat.

As the maximum possible time for the crew to return to Earth in the event of an emergency depressurization of the descent vehicle at the most dangerous flight segments, the time was taken to be 105–125 minutes. Several options for protective equipment were considered: the use of various types of altitude-compensating suit with pneumomechanical compensation of excess pressure in a pressure helmet and a lightweight spacesuit based on the Sokol aviation spacesuit.

Were given the fitting of models of such equipment with seat cradles, an analysis of possible oxygen supply schemes and their masses. The optimal option was the use of a lightweight spacesuit with a soft non-removable helmet with a folding sight glass and an open-type life support system (coolant), designed for 2 hours of work, which was later named "Falcon". It is used to this day, having undergone a number of upgrades. But, despite this, with historical From the point of view, the VKK-47 high-altitude compensating suit developed for the Soyuz spacecraft deserves special attention. 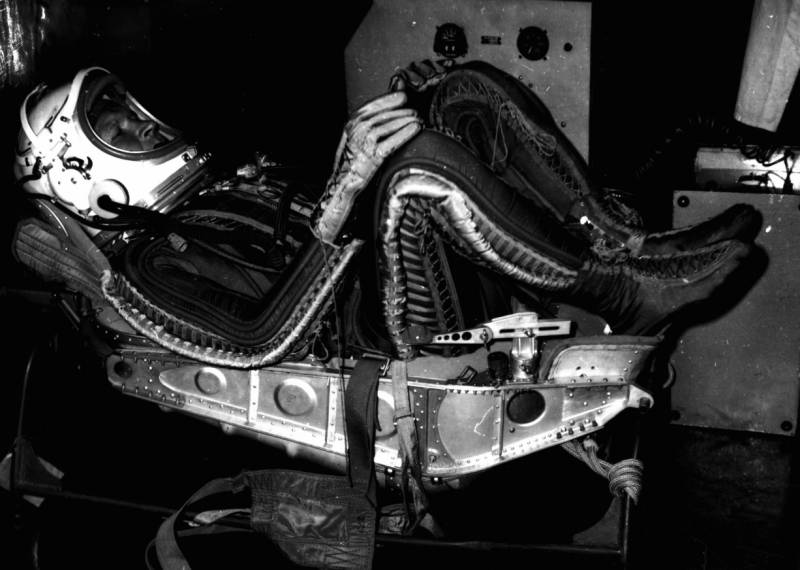 VKK-47 and its design

As for VKK-47, which was considered as an alternative to the spacesuit, it was a "classic" high-altitude compensating suit.

So, the use of a high-altitude compensating suit in combination with a pressure helmet at that time became widespread in high-altitude aviation... And in production there were proven models.

VKK-47 was similar in design to VKK-6. But he had a cutting for the position in a position characteristic of the Kazbek chair, a system of tensioner chambers, and also his set included height-compensating socks and gloves.

The helmet, paired with the VKK, could provide work at altitudes up to 30 km (and slightly higher).

On the one hand, in contrast to the spacesuit, the VKK provided greater freedom of movement and ease of dressing. Since no sealing was required. And the individual adjustment was carried out only once before the start of operation.

On the other hand, in the event of depressurization, being in a "working" VKK could cause difficulties, since the external (compensating) pressure created by the suit on the human body is often accompanied by painful sensations, since the whole body is compressed, like one cuff of a tonometer to determine blood pressure.

If in high-altitude aviation the work of the VKK is determined by the time required for an emergency descent to a safe altitude, then in the event of an accident, cosmonauts had to spend up to two hours on a spacecraft. In addition, the "embryo" posture provided by the "Kazbek" chair was not the most successful for being in it in a working VKK, which significantly disrupted the blood supply to the lower extremities.

Of course, VKK-47 could become a temporary solution to the problem and save the lives of astronauts in the event of a depressurization.

This is the path that the Americans took. After the tragedy of the Challenger spacecraft, they used the Launch Entry Suit from September 1988 (flight STS -26) and until 1994 (flight STS -65) to protect the crew in emergencies during takeoff. and the landing of the reusable Shuttle.

Ctrl Enter
Noticed oshЫbku Highlight text and press. Ctrl + Enter
We are
About Stalin and KhrushchevMilitary reform as an integral part of the security concept of the Russian Federation: Systematic dynamic assessment
Military Reviewin Yandex News
Military Reviewin Google News
28 comments
Information
Dear reader, to leave comments on the publication, you must sign in.