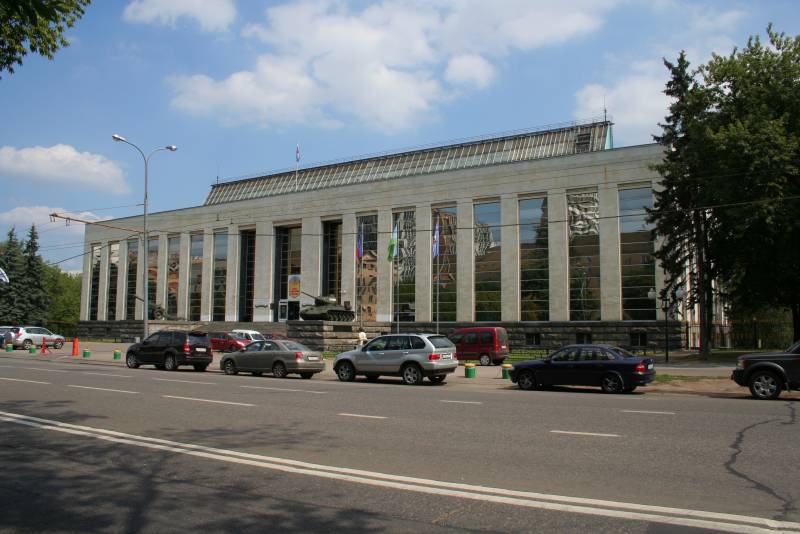 Almost all information about the possible relocation of expositions of the Central Museum of the Armed Forces is based on materials obtained by the Russian service of the BBC. At the disposal of the editors was the presentation of the future museum complex, as well as anonymous testimonies of the museum staff. In favor of the source is evidenced by the excavation work carried out recently in Kubinka near Moscow at the proposed construction site. 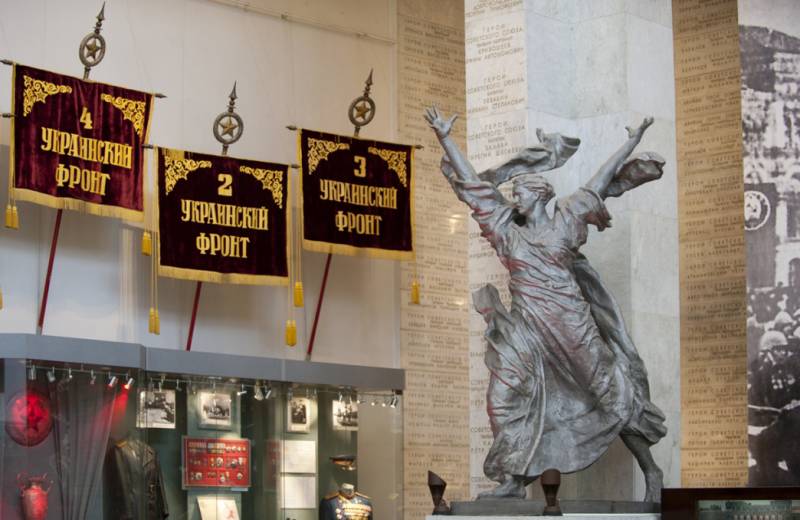 Central Museum of the Russian Armed Forces. Source: ru.moscovery.com
Park "Patriot" from the very beginning was designed for large-scale construction. And the annual forum "Army" did not occupy the most important place in it. Sergei Shoigu six years ago spoke about the concentration in the park of all the major military museums in the country. One of the first to relocate to the new hangars was equipment from the tank museum in Kubinka. 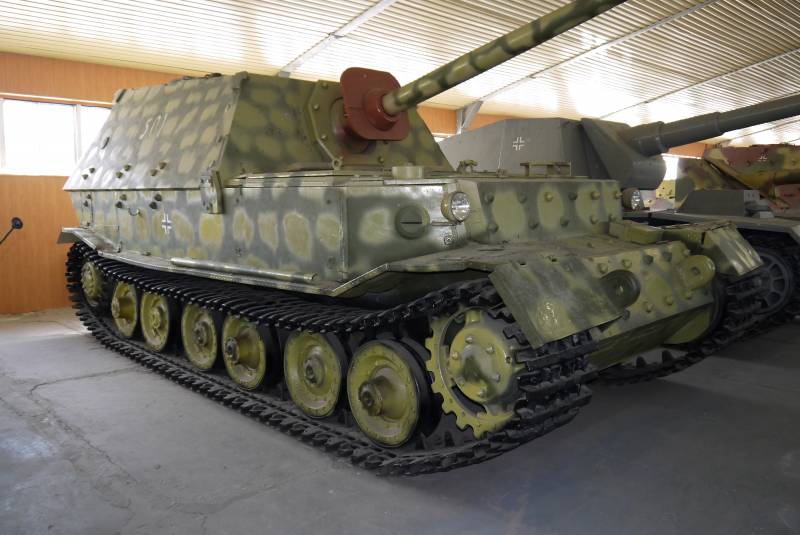 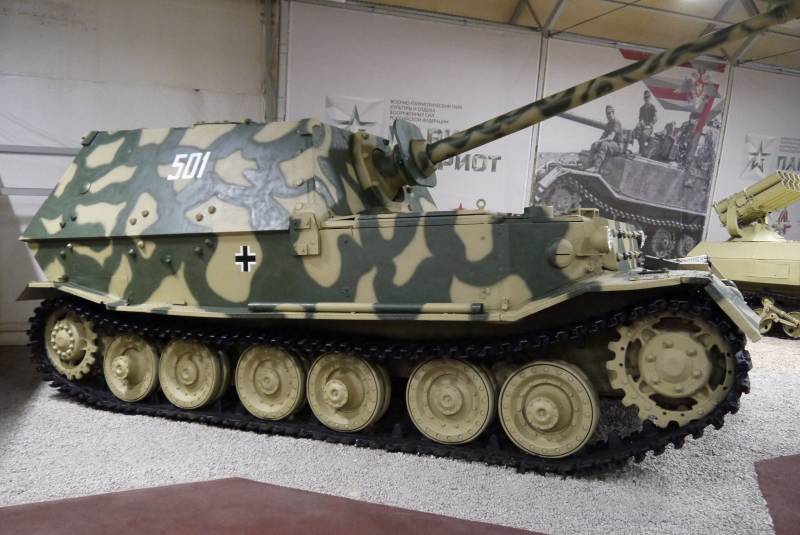 Above, the German "Ferdinand" in the tank museum in Kubinka, below it is in the Patriot park. Photo by the author
Indeed, it was a very good idea. The equipment was finally taken out of the gloomy hangars of the military unit. Honestly, for all the uniqueness of the exposition in Kubinka, the exhibits were sometimes arranged very tightly and did not allow to fully observe the technical features. And if visitors were lucky enough to get to the museum in the autumn-spring-winter period, then the terrible cold did not allow them to get acquainted with the exhibits in detail. However, this was not a hindrance to real enthusiasts and connoisseurs of armored relics.

Now in "Patriot" cars are in warm, well-lit hangars with appropriate entourage and sound effects. At the moment, the Patriot Park has accepted only a part of the collection. Monsters such as the Mouse and the Dora cannon seem to forever remain in their original place. It is worth remembering that not only have moved to the Patriot Park tank a museum - it seems that all the images of Soviet military equipment are concentrated in it.

This approach also has a not very positive side - now one day is definitely not enough to get to know the collection. If earlier in Kubinka tanks could be easily inspected in one daylight, now the most extensive collection of "Patriot" requires two, or even three days. Considering the remoteness of the complex from Moscow, this is not very convenient, especially for guests of the capital. 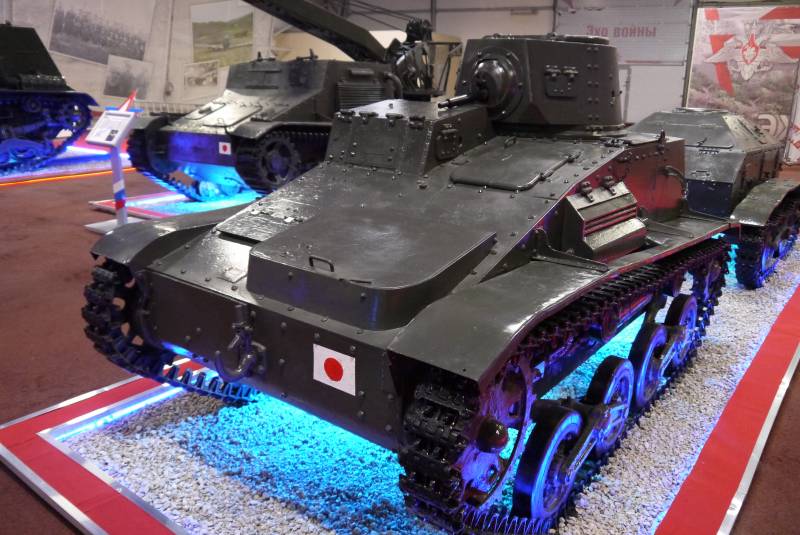 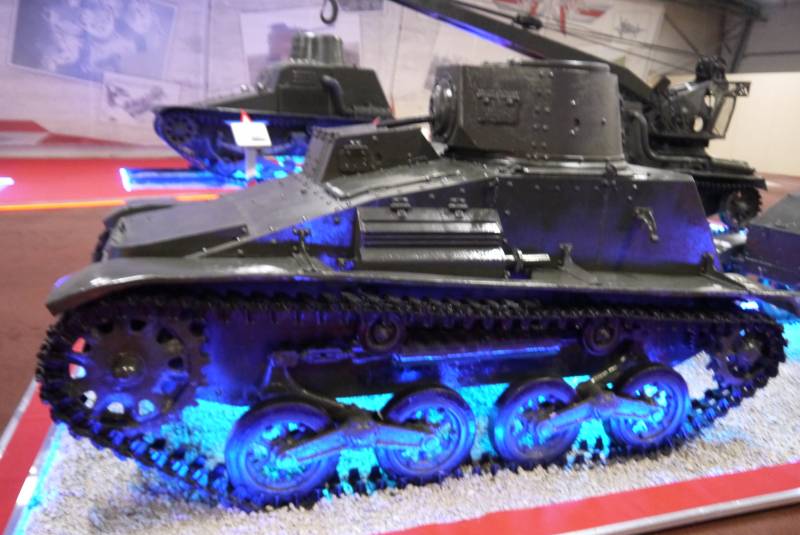 Japanese tank type 94 TK with a chemical trailer. Park "Patriot". Photo by the author
In 2021, Shoigu's plans to move the largest military museums to Patriot have not yet been implemented.

In the Moscow region, in particular, exhibits of the Artillery Museum from St. Petersburg were supposed to appear. On the one hand, this is even true - some of the most unique cannons from pre-Petrine times are simply laid out in the open air. To be honest, they have no effect on visitors. In the "Patriot", I think, the guns will find a more worthy place. On the other hand, the Artillery Museum in St. Petersburg is the oldest museum of its kind in Russia and its complete transfer to the Moscow region would be a real blasphemy to historical memory. Probably, the initiators will find a middle ground without depriving either St. Petersburg or Kubinka.

"Blue Star of the Patriot"

The transfer of museum assets under the "single roof" of the Patriot complex is more beneficial than negative. Visitors will have the opportunity, albeit not in one day, but to get acquainted with a wide range of exhibits - armored vehicles, artillery, rifle weapons and other historical artifacts.

And the new museum complex in the form of a huge blue five-pointed star with exhibits of the Central Museum of the Armed Forces (CMVS) will become an organic part of the Patriot Park. However, the Russian service of the BBC sees in the transfer of even some of the exhibits from Moscow to Kubinka only negative. Basically, this is based on the opinion of unnamed employees of the CMVS, dissatisfied with the transformation of the classic museum into something like Disneyland. Indeed, in the frames of the presentation, which ended up in the hands of the BBC, the future large-scale building impresses with its futurism. The museum will be created in a single ensemble with the main temple of the Armed Forces and will be supplemented by the domed building of the Pantheon. Its main purpose is to store "a single database of all outstanding historical personalities that have remained in the memory of generations, and thanks to which the history and modernity of our country have been formed." The pantheon with the museum building will be connected by a park, consisting in a plan of laurel branches. 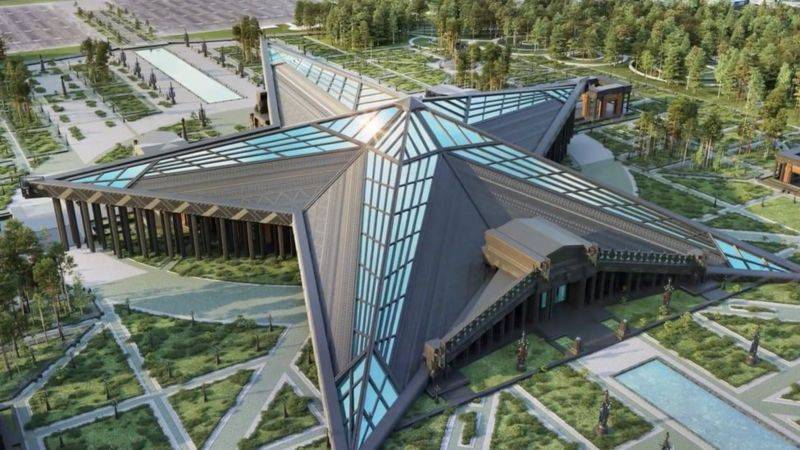 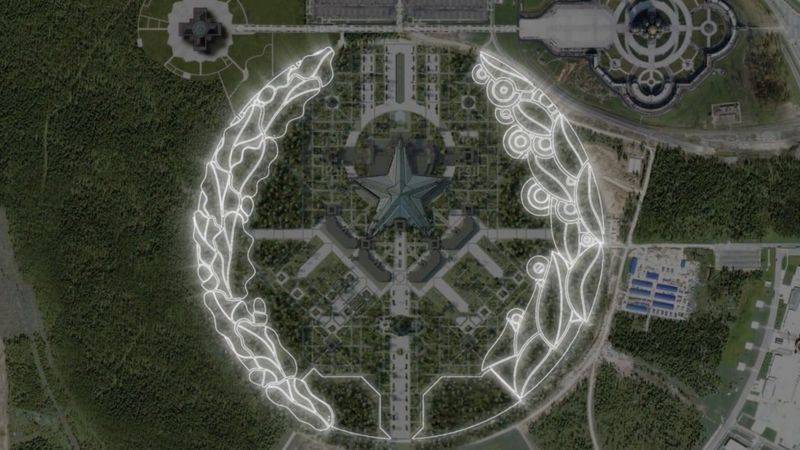 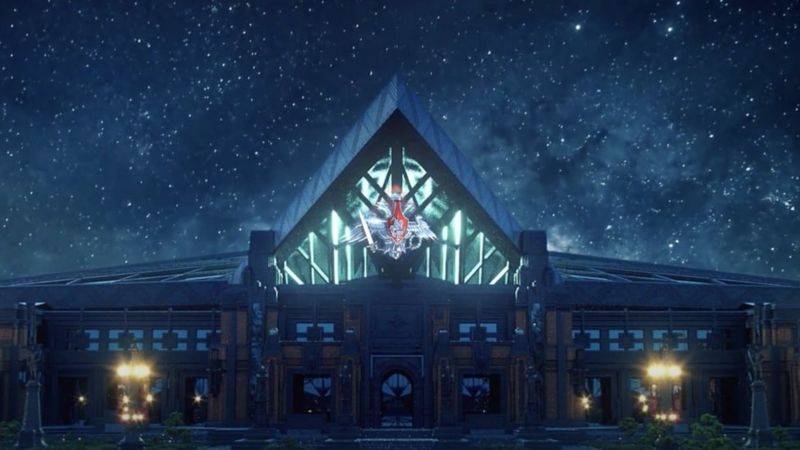 Stills from a video presentation on the Nikolay Domnin Youtube channel.
The building of the museum, into which it is planned to transfer part of the CMVS exposition, is a star with one raised beam. According to the Air Force presentation, four more will be located around the main building - the expositions of the Ground Forces, the Navy, the Aerospace Forces and the Strategic Missile Forces.

A more accurate idea of ​​the architecture of the future museum complex could be given by video presentations from YouTube (Nikolay Domnin channel), but they were mysteriously removed. According to the BBC, the disappearance of video presentations is associated with the release of the material "War Disneyland". Will the Armed Forces Museum be moved to Patriot Park? at bbc.com. The personality of Nikolay Domnin adds even more conspiracy. As the BBC assures, this is a specialist in the field of computer graphics and, quite obviously, he also created the presentation of the future Patriot museums. And after the show to the high ranks he posted it on the network. But this, we repeat, is only the version of Pavel Aksenov, the author of bbc.com.

The material of the Russian service of the Air Force cites the opinion of Andrey Karpov, a volunteer restorer of military equipment at the Central Military District. He believes that the appearance of the museum in the Patriot Park may be timed to coincide with the 80th anniversary of the Victory. Quite likely the opening date, given the grandeur of the architectural complex.

The transfer of museum relics to new sites is always associated with certain risks. First of all, it is the safety of the exhibits. In addition to armored vehicles, which are distinguished by their relative strength, there are many unique aircraft in the CMVS. For obvious reasons, the transportation of such artifacts is fraught with serious difficulties. And even in the case of tanks, there are concerns. Employees of the Armed Forces Museum believe that some of the equipment may be on display in the open air. For example, as part of the reconstruction of one of the battles of the Great Patriotic War. It is unnecessary to talk about how destructive this will be for the unique KV-2 or T-38. For example, in the installation "Victory Field" located in front of the temple of the Armed Forces, during the reconstruction, the exhibits were even set on fire. Volunteers claim that some of the equipment is already falling apart. 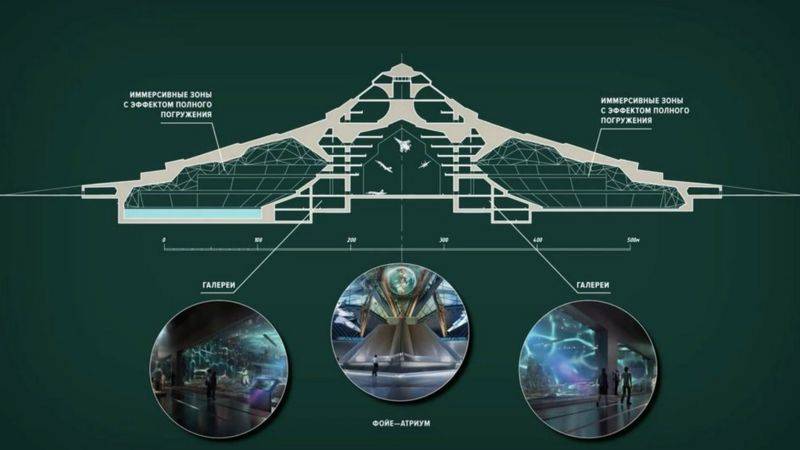 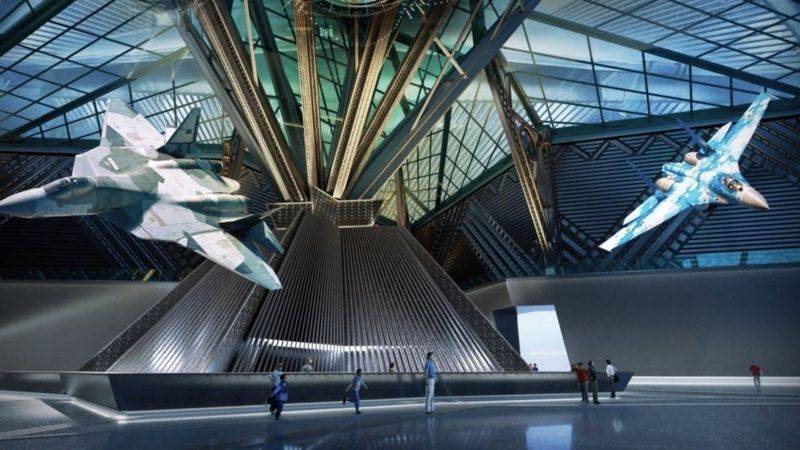 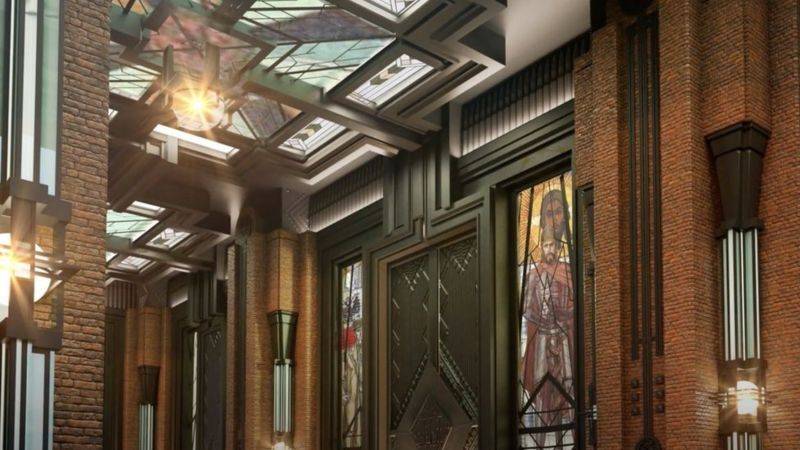 Stills from a video presentation on the Nikolay Domnin YouTube channel.
There is one more important aspect related to the preservation of the exhibits.

According to Yulia Kantor, Doctor of Historical Sciences, Chief Researcher of the St. Petersburg Institute of History of the Russian Academy of Sciences, 400 exhibits were lost when the exhibits were moved from the CMVS to the Memory Road Museum in the Patriot Park! The total cost of the lost is close to 12 million rubles. A year ago, due to the emergency nature of the opening of the “Memory Road” branch of the Central Military District, security and proper conditions for the transfer of more than 5 thousand exhibits were not organized. Julia Kantor says that as a result, they lost German awards, uniforms, award weapons of the USSR and other historical values. Most likely, they were simply stolen by unscrupulous builders. How quickly will it be possible (and is it possible at all) for law enforcement agencies to return what they have lost, time will tell. Who can guarantee the safety of the CMVS exhibits when moving to a complex under construction? Apparently, much more valuables will be transported to the museum than to the Memory Road.

The emergence of new museums is always a good thing. The new site in the Patriot Park will allow not only to expand the audience, but also to get from the storerooms exhibits that were simply impossible to demonstrate in the head building of the Central Military District.

But in a new business, it is extremely important not to go too far with the notorious immersiveness, the desire to immerse visitors in the atmosphere of war, and not slip into vulgar interactive. No wonder many people call the future complex "War Disneyland". Still, turning the memory of the war into an exciting attraction or a colorful show is the last thing that veterans would like.

Ctrl Enter
Noticed oshЫbku Highlight text and press. Ctrl + Enter
We are
List of destroyed the largest and most high-tech enterprisesMilitary reform as an integral part of the security concept of the Russian Federation: Systematic dynamic assessment
Military Reviewin Yandex News
Military Reviewin Google News
73 comments
Information
Dear reader, to leave comments on the publication, you must sign in.