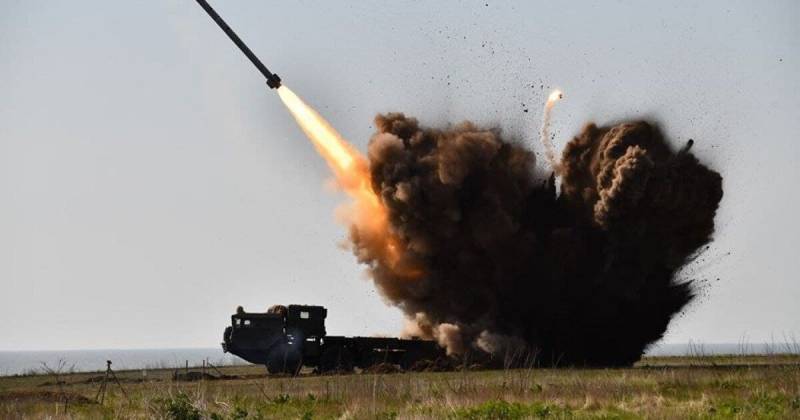 In several of our previous military-analytical reviews, we repeatedly returned to a detailed analysis of a number of operational and tactical advantages that became available to the rocket artillery divisions (ReADn) of the Russian Missile Forces and artillery, thanks to the acquisition of operational combat readiness by promising long-range 300-mm guided missiles of the line 9M544 and 9M549 with their final integration into the ammunition load of the latest high-precision MLRS "Tornado-S".

Equipping high-precision MLRS "Tornado-S" with promising long-range missiles of the 9M544 / 549 family put an end to the issue of Russian missile defense and artillery domination over the rocket artillery battalions of NATO ground forces, which have MLRS and HIMARS MLRS

In particular, the equipment, firstly, with the most modern control units 9B706.1, built on the basis of the strapdown inertial navigation systems (SINS) SN398M (having high-performance on-board computers BI616, as well as more high-precision sensors of angular velocity and linear acceleration), and secondly - blocks of advanced nasal aerodynamic rudders, provided promising guided missiles with the above indices with a 33% increase in the range in comparison with the earlier modification of the 9M528 adjustable missiles (120 versus 90 km, respectively).

The former made it possible to achieve the construction of a more optimal quasi-ballistic flight trajectory with a predominant stratospheric segment (apogee height of about 30–35 km) in its marching section, where the extremely rarefied atmosphere (about 0,01–0,008 bar) made it possible to achieve a multiple reduction in aerodynamic drag and, accordingly, ballistic braking of improved 9M544 / 549 missiles with a total increase in flight range.

The blocks of advanced nasal aerodynamic rudders significantly increased the aerodynamic quality of the new Tula products through the implementation of the effect of additional "subplanning", which has proven itself in the aerodynamic configuration of the "load-bearing body" type of American 227-mm guided missiles of the M30A1 GMLRS and M31A1 "Unitary" line, integrated into ammunition sets for promising high-precision MLRS M270 MLRS and M142 HIMARS and with a range of 75-90 km.

Thus, equipping the Tornado-S high-precision MLRS with advanced 9M544 / 549 URSs provided the rocket artillery battalions of the Russian MFA with the opportunity to dominate in hypothetical counter-battery missile and artillery "duels" in the European theater of operations with American, Polish and / or Romanian missile launchers, MLRS and HIMARS.

Meanwhile, just a few days earlier, the RIA News", With reference to a competent source in the military-industrial complex of Russia in general and NPO Splav in particular, announced the start of research and development work as part of the modernization program for the guidance system of guided missiles of the 9M544 / 549 family, which consists in designing and retrofitting with multispectral optoelectronic homing heads, in addition to the above described inertial navigation units and GLONASS modules.

Large-scale production and equipping 9M544 / 549 shells with these homing heads will provide divisions of the 9K515 Tornado-S MLRS with a number of the following operational and tactical advantages.

Firstly, this is a several times higher level of noise immunity and maintaining the proper efficiency of use in a complex jamming environment, due to the intensive use by the enemy of electronic warfare systems operating in the frequency range from 1227,6 to 1575,42 MHz (L-range of decimeter waves) and carrying out suppression of GPS guidance receivers, also integrated into the element base of the improved version of 9M544 / 549 projectiles.

It should be noted that the above-mentioned American 227-mm guided missiles of the M30A1 GMLRS and M31A1 "Unitary" families, equipped only with INS and GPS guidance subsystems, are vulnerable to similar domestic ground-based electronic warfare systems (Zhitel and Diabazol).

Secondly, this is an order of magnitude higher accuracy, reflected in the coefficient of circular probable deviation (CEP), which for promising Tula shells will be about 1 m, while the CEP of URS 9M544 / 549 is only 7-15 m, which is due to the accuracy limitations of the GLONASS radio navigation system and 9B706.1 inertial navigation units.

And finally, thirdly, this is the minimum CEP in the course of Tornado-S operation against moving and maneuvering single and group surface targets, which is due to the instant loading of updated target coordinates from the on-board computer of the multispectral OELGSN into the control system of aerodynamic rudders of promising rockets and cannot be implemented through the GLONASS guidance subsystem.

Ctrl Enter
Noticed oshЫbku Highlight text and press. Ctrl + Enter
We are
Hidden advantages of the Ukrainian "Alder-M" over "Tornado-S". How will the Tula gunsmiths answer?A strike on the anti-missile barrier of the Leningrad and Pskov regions or another round of alarmism? What the RIA FAN expert missed
Military Reviewin Yandex News
Military Reviewin Google News
50 comments
Ad