The Russian army will replenish at the expense of students 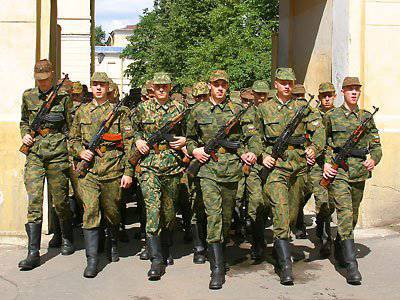 Delay is not valid. In the Vladimir region hundreds of students learned that they would have to go to the army instead of studying. The fact is that universities simply did not have time to receive state accreditation for specialties and students lost their deferrals.

The teacher's question: "Why are you so few today?" - students of radio engineering are still jokingly answering: "Everyone left for the army." Of the 22 people in class less than half. Someone was called for a medical examination, someone went to a lawyer for a consultation. Almost the whole group came the agenda.

"I think this is wrong, because the army is such a thing that after it people will no longer study. It’s necessary to work and support a family. It will be difficult to study after the army," said VLGU student Ivan Glazkov.

“The Ministry of Defense, the military commissariat of the region are not to blame for this. The educational institutions are to blame for this. Why didn’t they accredit any specialty in advance. Citizens are called to the draft board only for those specialties that do not have state accreditation,” says . Igor Byadovsky, head of the preparation department for the draft military commissariat of the region

Customs, nanotechnology, tourism. Vladimir State University is not accredited 24 specialty. How many students will go to defend their homeland is still unknown. One thing is clear - the bill goes to the hundreds. Although, upon admission, everyone was warned: new directions and under the law on education should be accredited after five years.

Ekaterina Ilyicheva, a student at VLGU, will survive: "12 boys will be taken away and only 5 girls will remain. I have no idea how we will learn. We'll have to either translate. I just don’t know what else to do."

According to the plan of the regional military commissariat, more than three thousand young people should go to the army this fall. Compared with the spring call, the plan has increased by a third. Students do not doubt: they want to eliminate the shortfall. In the military registration and enlistment offices they say: “Technique is now complex and the army needs specialists. But here is a contradiction. Call for a dropout. Lawyers see another problem - the legislation is imperfect.

"Our legislator did not take into account the requirements of the Law" On Education "when he passed the law" On Military Duty and Military Service "in the new edition," said Alexander Feofilaktov.

Until 1 in January 2008, the deferment was received by all full-time students of state universities, and in non-state ones it was granted only in accredited specialties. Now the boundaries are erased. At Vladimir State University, they are not just going to part with the students. Already prepared an appeal to the commissar. The university does not exclude that justice will have to be sought in court.