Ukrainian Deputy Prime Minister: For us in the government, the issue of the physical presence of President Zelensky at the NATO summit is not important 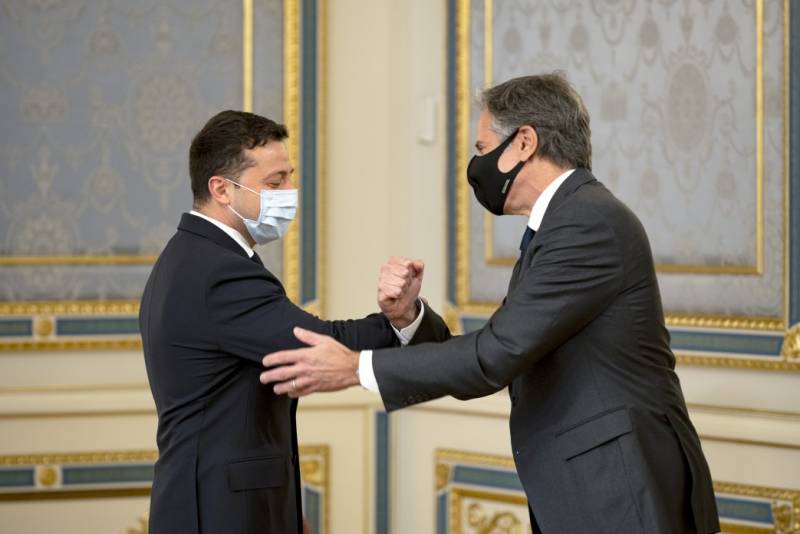 President of Ukraine and US Secretary of State

The Ukrainian government announced its expectations from the upcoming June NATO summit. Earlier, Ukrainian Foreign Minister Dmytro Kuleba said that “unfortunately, the issue of granting Ukraine a MAP (an action plan for membership in the alliance) at the June NATO summit should not be expected”.

However, now the Ukrainian government is making different statements. Thus, Deputy Prime Minister of Ukraine Olga Stefanishina announced that "the Ukrainian issue will be on the agenda of the NATO summit on June 14". This statement was made by Stefanishina within the framework of the forum, which is being held in Kiev and which is dedicated to the Day of Europe.

According to the Deputy Prime Minister of Ukraine, Ukrainian diplomats "have been working for eight months to ensure that NATO members reach a consensus on the issue of Ukraine." Earlier, one of the Ukrainian generals said that Ukraine is not provided with the MAP, since in NATO "some countries are afraid of a tough reaction from Russia."

For us in the government, the issue of the physical presence of President Zelensky at the NATO summit is not important. Nevertheless, many of our allies have confirmed that the issue of Ukraine will be raised at the June summit of the alliance.
It should be recalled that a few days ago, ex-adviser to the President of the United States (at that time - Trump) John Bolton proposed NATO to "get rid of the gray zone" between the alliance and Russia and all countries that have not yet been admitted to NATO in Eastern Europe have been admitted to the military bloc. ... Among them are Ukraine, Georgia, Moldova.

Ctrl Enter
Noticed oshЫbku Highlight text and press. Ctrl + Enter
We are
Ukrainian Foreign Minister: One cannot count on providing an action plan for NATO membership by JuneReports from the militia of New Russia for 27-28 September 2014 of the year
Military Reviewin Yandex News
Military Reviewin Google News
48 comments
Information
Dear reader, to leave comments on the publication, you must sign in.