Who needs another war in the Middle East 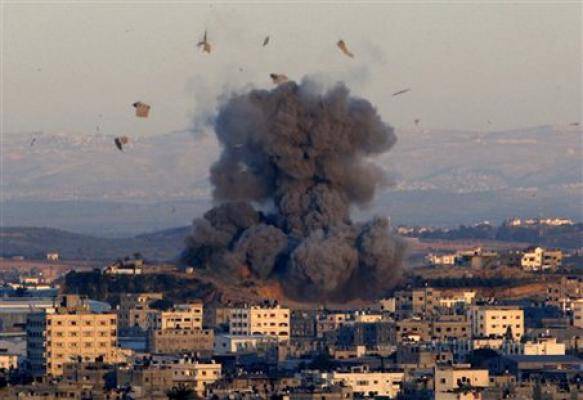 Literally a couple of hours after the shelling of Israel, letters appeared in my mail, the content of which can be defined very briefly: “Why are we silent? Who is right and who is to blame for the escalation of the conflict? Who will be responsible for the deaths of Jews and Arabs? What's next?"


It is strange to read the demands to settle a problem that tens, even hundreds of politicians, generals and diplomats cannot solve for many years. The problem of Palestine has already been recognized by most analysts, albeit tacitly, unsolvable. However, I have my own point of view on this issue. Therefore, this material should not be taken as blaming some and whitening others.

The truth is somewhere nearby, but each nation has its own truth. Both Jews and Arabs. And this truth is perceived by people in the degree of truthfulness to which a person supports this or that nation, what religion a person professes, in what state he lives.
For example, I perfectly understand the reaction of Ramzan Kadyrov to the events in Jerusalem and the shelling of Israeli cities. Muslims end the holy month of Ramadan. And at this time, on May 7, the Israeli police storm the Al-Aqsa Mosque, on the day of Al-Quds, on the Temple Mount. How should the Muslim world react to this assault?

I also perfectly understand Vladimir Solovyov, who in every possible way emphasizes his nationality (almost every day) and takes everything that concerns the Jewish people very personally. He's trying to figure out what's going on. But deep in his soul, he is against the fight between Jews and Arabs, against the blood and death of civilians. Against calls to solve the problem by military means.

An excursion into the history that everyone knows

I will not go deep into history the conflict is far away. The history of the creation of Israel is known to those who want to know something about it. I am more interested in the moment when the decision of the UN Security Council became impossible to fulfill? When did the conflict arise, that dividing line between Jews and Arabs, which today has become simply impossible to cross?

It is clear that after what the Jews in European countries experienced during World War II, the Europeans needed to prevent them from returning to their countries. After all, they will ask from those who killed their families, their children, their old people. The myth that only German soldiers and the German people were guilty of the massacres of Jews has long been one of the most popular in Europe and in the USSR as well.

Sometimes the question arises as to why this myth was also widespread in the USSR? How, then, can one explain the disappearance of Jews in Lvov, Kiev, Minsk, and the Baltic republics? We considered these republics to be part of the Soviet people. How can we explain the disappearance of Jews in socialist countries like Poland? But this is my opinion, which I do not claim to be correct.

But back to the history of Israel. It seems to me that the problem became insoluble after the Israelis occupied East Jerusalem during the 1967 war. But the old town is located there. The Jews went for a direct violation of the UN Security Council decision, according to which Jerusalem was to become a special administrative unit under the control of the UN.

The city, which is the center of three religions at once, was supposed to become a semblance of the European Vatican. But even then it became clear that Israel was focused on completely taking this city for itself. Nobody asked the opinions of the Arabs. US support untied Tel Aviv's hands. In fact, Jerusalem became Israeli, but legally it remained nobody's.

Aggravation was inevitable. And everyone understood it

Alas, there is no need to say that the situation will be frozen for decades, or perhaps forever. We were silent about too many things. Too much was advantageous for us not to see. I say "us" without referring to Russia or any other country. I'm talking about the press. About journalists, analysts, experts.

We "swallowed" the American version of the future capital of Palestine. Somewhere there, sometime there, a new capital of the Arab state may be built. Built in the east, more precisely - in the eastern suburbs of Jerusalem. It suited everyone. More precisely, as I wrote above, we swallowed it out of fear, because of weakness, because of cowardice, for political reasons.

Together we did not notice that there was simply nowhere to create Palestine. There is simply nowhere physically. West Bank and Gaza Strip. And narrow stretches of territory between the numerous Israeli settlements. Dumbbell on the Middle East map. And the Jews themselves did not notice this. The land is kind of ownerless, as long as there is no formalized state. And there are few people there.

It finally became clear that this business would not end in peace after President Trump's decision to move the US Embassy to Jerusalem. Many people remember the number of protests against such a decision in the world and in the United States itself. But few will be able to clearly formulate the reason for such a protest. Well, the Americans moved the embassy, ​​so what?

And the reason is really serious. The relocation of the embassy actually means the recognition of Jerusalem as legally Israeli. Knowing how the world of the West works, it is not difficult to imagine that quite a lot of Washington's haunted countries will do the same in the wake of the United States. Consequently, some of the UN members recognize the legitimacy of the capture of Jerusalem and Israel's actions in general.

There is another factor that even the Israelis themselves are embarrassed to talk about. Traditionally, thanks to the media, we are accustomed to believe that the overwhelming majority of crimes in Israel are committed by Arabs. That it is Arab settlements (or Arab areas of cities) that are breeding grounds for crime in this country. In fact, the number of street crimes of Arabs and Jews is quite comparable.

On the streets of Israeli cities today, not only gangs of Palestinians are operating, but also gangs of Jews. And this is a fact. And the police, as it turned out, are not trained to fight these gangs. Today we see the result of this transformation of society in numerous videos from Israeli cities.

Last but not least. The Israelis are well aware that Washington, by its actions against Iran, provoked it to activate not only its nuclear program, but also to support the Palestinian militants. Both the first and the second are very undesirable for Israel. The intensification of hostilities, or better - war, will force the Americans to decide who is their ally and who needs to be spread rot.

I have written more than once that the atomic weapon Iran will radically change the balance of power not in favor of Israel. Therefore, the Israeli prime minister is forced to push the United States to the desired decision. What is needed, first of all, is the Israelis.

Is there a way to stop the bloodshed

It is already clear that in the current conditions the confrontation will not end without outside help. Israel is preparing a ground operation for retaliation, strikes at Hamas, and all talk about civilians, children and other old people is swept aside. If there, according to intelligence, there is something belonging to Hamas, then all means are good, and the lives of civilians are not important.

Recently, Turkish President Recep Erdogan proposed joint actions to the Russian President to stop the bloodshed. No matter what we write, no matter what we say, Syria has shown that in the end it is possible to negotiate with the Turks. Difficult, but possible. It is clear that Erdogan is playing his own game. The proposal of the international peacekeeping forces from the Russian and Turkish military to protect the Palestinians is, first of all, the legalization of the Turkish army in the conflict zone.

Turkey needs Russia already because it is the only country with which both sides talk. And the soldiers of Russia are already quite respected in the Arab world. So, within the framework of Erdogan's policy to create the Great Turan, everything is working out. Jerusalem was Turkish. Hence, it must be returned. And Palestine was Turkish a hundred years ago.

An interesting construction turns out. On the one hand, Israel needs Jerusalem in order to remain an exclusive regional state. On the other hand, Israeli Jerusalem breaks the entire structure of international relations in which this state was created.

At the same time, Turkey is thinking about returning its leading position in the Middle East. This requires Turkish Jerusalem. And Israel, as a state, is absolutely unnecessary. But ... Both options completely exclude the existence of an independent Palestine. Both options don't even offer autonomy.

Russia can really influence this war. Do not stop, but freeze for a while. But no more. With or without the help of the Turks, it doesn't matter. It is not necessary to bring in peacekeepers for this. Excessive spending and unnecessary risk of the lives of peacekeepers. We have enough influence and diplomacy to bring both Israelis and Palestinians to the negotiating table.

However, one cannot expect results from such negotiations. Simply because for the elimination of the conflict it is necessary to go back, to return to the UN General Assembly resolution number 181 of November 29, 1947 on the partition of Palestine and the formation of two states. If Palestine agrees with this, then for Israel it is like death. This means that no matter what is agreed at the negotiations, it will not change the situation in any way. Conflicts, wars, claims will arise.

And ultimately, given the fact that the world is changing, this could lead to a big war. And, to put it bluntly, to a war in which not only the countries of the region will participate, but also the world powers. I do not exclude that the war may take on a global character.

The Middle East is on the verge of war. Another Arab-Israeli war. If you look at the Arab countries, you can see a real rise in anti-Israel sentiment. So far, governments are in control. But this "for now" will operate exactly before the start of Israel's ground operation. And, judging by what is happening in this country, such an operation is being prepared.

The proposal of President Erdogan, for whatever reasons this proposal is not made, is currently impracticable.

UN? The next resolution, taking into account the attitude to these resolutions in Tel Aviv, will simply be nothing. Another "expression of deep concern", nothing more.

Both sides are not at all inclined towards a peaceful settlement. Whatever Israeli and Palestinian politicians tell us ...

Ctrl Enter
Noticed oshЫbku Highlight text and press. Ctrl + Enter
We are
Situational analysis of the death of the MH17 flight (Malaysian Boeing 777), made on the basis of engineering analysis from 15.08.2014"Israel is a big pain in America’s ass"
Military Reviewin Yandex News
Military Reviewin Google News
296 comments
Ad