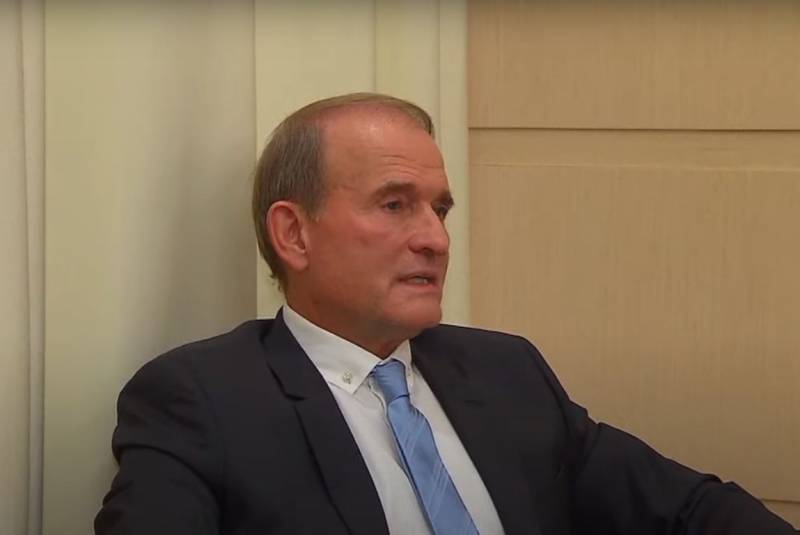 On May 13, a court in Kiev chose a measure of restraint for the leader of the Ukrainian opposition. Viktor Medvedchuk, dubbed "Putin's godfather" by the media and accused by the Ukrainian authorities of working for Russia, was placed under house arrest and ordered to wear an electronic bracelet.

What Viktor Medvedchuk was suspected of

The personality of Viktor Medvedchuk and her role in contemporary Ukrainian politics are quite interesting. The head of the political council of the Opposition Platform - For Life party, Viktor Medvedchuk, came to Ukrainian political life a very long time ago, at the very beginning of the 1990s, having previously gained quite substantial experience in the legal profession.

From the very beginning of the events in Donbass, Medvedchuk declared the need for a peaceful settlement of the conflict. At the same time, he was attracted by the regime of Petro Poroshenko as a mediator in negotiations on the exchange of prisoners, and performed many other important functions. How did it happen that Medvedchuk became a defendant in a criminal case, and not about some embezzlement, but about high treason?

Formally, it all started with the fact that on May 11, 2021, the Prosecutor General of Ukraine, Irina Venediktova, filed suspicion on two deputies of the country's Verkhovna Rada: the chairman of the political council of the Opposition Platform - For Life party, Viktor Medvedchuk, and his fellow party member Taras Kozak.

The deputies were charged with committing crimes, the responsibility for which is stipulated by Articles 111 and 438 of the Criminal Code of Ukraine - "High treason" and "Violation of the laws and customs of war and plunder of the occupied territories." The articles are serious and the terms for them are also impressive: under the first article - from 10 to 15 years in prison, and under the second - up to life imprisonment. True, even 15 years for 67-year-old Medvedchuk is akin to life imprisonment.

Medvedchuk was accused of having handed over documents on the Glubokaya oil field to Russia, told Taras Kozak, who is in Russia, information about one of the Ukrainian secret military installations, created the Luch (Promin) information network for pro-Russian propaganda among Ukrainians traveling to work in Russia. 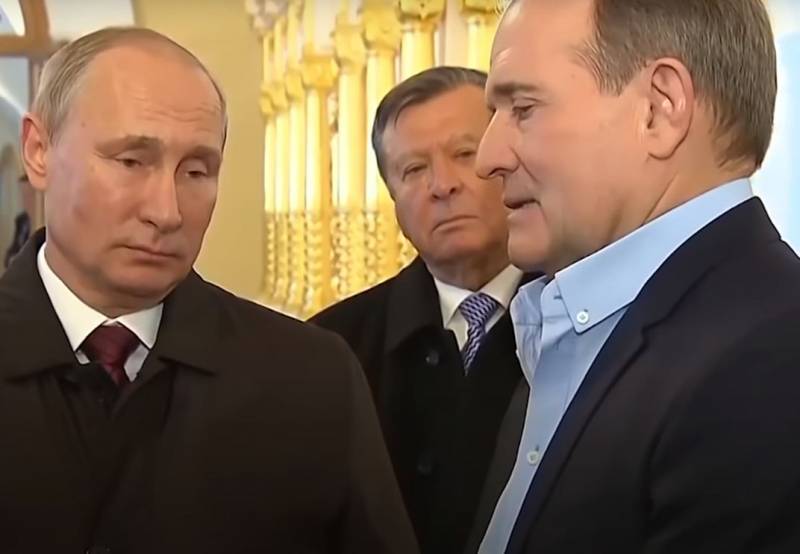 Viktor Medvedchuk has long known Vladimir Putin
Ukrainian and foreign political scientists link the criminal case against Medvedchuk with the political struggle in Ukraine. Actually, this is how it is: recently, Rinat Akhmetov, who rarely gives interviews and does not particularly strive for publicity, declared his full support for the course of President of Ukraine Volodymyr Zelensky.

A new political party "Ukraine is our home" is being created, which will apply for the same electorate that Medvedchuk's party "Opposition Platform - For Life" is currently processing. That is, there is a rivalry for that part of the electorate that is loyal to Russia - for the inhabitants of the regions of the east and southeast of Ukraine. To get this electorate to support Zelenskiy, we must first get rid of Medvedchuk.

Medvedchuk's visit to the prosecutor's office

Viktor Medvedchuk, unlike his namesake Viktor Yanukovych, did not flee to Russia. He himself came to the Ukrainian General Prosecutor's Office. Immediately after this visit, interesting things began to happen.

First, it turned out that in the press release, which was originally distributed by the Ukrainian prosecutor's office, the articles were mixed up: first, Medvedchuk was credited with suspicion of a crime under Article 348 of the Criminal Code of Ukraine "Attempt on the Life of a Serviceman." But we can hardly imagine Medvedchuk running under the fences of Ukrainian military units and taking off the sentries. It is clear that this article was attributed to the policy due to the carelessness and carelessness of Ukrainian prosecutors, and soon the media clarified the situation: Medvedchuk is suspected of committing a crime, responsibility for which is provided for in Article 438. The plundering of the occupied territories is about the Glubokoe deposit.

Further more. From the text of the suspicion, which Medvedchuk himself saw only on May 12, the mention of an episode with the issuance of the location of a secret military facility of the Ukrainian army to Russia disappeared. Apparently, prosecutors still bother to find out that there is no secret in the location of this object - information about it is publicly available on the Ukrainian Wikipedia, and you don't have to be a Russian FSB officer or a Ukrainian Medvedchuk to get to it. access. Any Ukrainian, Russian, and even Chinese or Japanese seventh grader with the skills of using the Google translator can easily find out where the top secret object is. 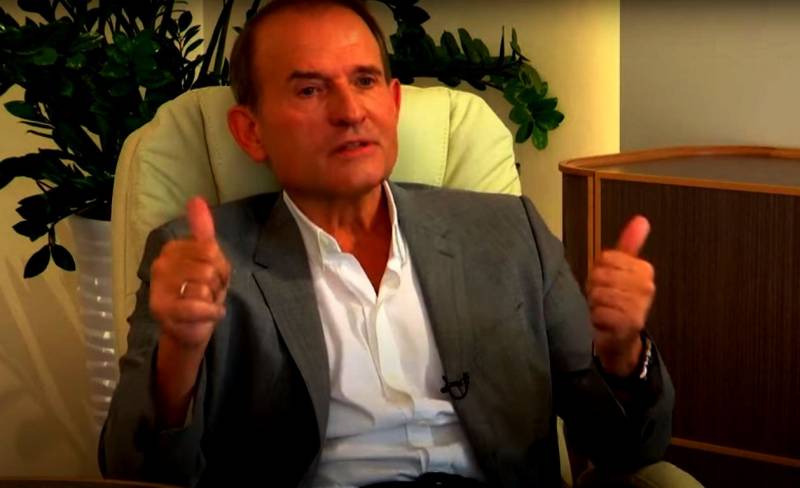 But even these are just “flowers”. Most importantly, Viktor Medvedchuk did not flee Ukraine, although the authorities constantly talked about the fact that he was about to flee to Russia. If Medvedchuk had really left, he would probably have avoided further risks, but he would have earned the stigma of a "Kremlin agent", and it would be very, very difficult to wash off this stigma. Now the situation has changed. Medvedchuk remained in Ukraine, and the authorities simply do not know what to do.

The most important resource for such political operations was spent - time. Now the investigation of the criminal case against Medvedchuk will drag on, and this will not have the best effect on the government's PR campaign. Moreover, Medvedchuk himself appeared at the Office of the Prosecutor General Venediktova and demanded to hand him the text of the suspicion. With this, he completely confused the cards of his opponents.

Apparently, the Prosecutor General's Office quickly realized this and that is why they changed the requirements for a preventive measure. If earlier the prosecutor's office demanded an unequivocal arrest of Medvedchuk and his placement in a pre-trial detention center, then after his visit they started talking about the possibility of a bail of $ 11 million. Like, if Medvedchuk contributes money, he will remain free until the trial. However, in this regard, the politician acted as competently as possible: Medvedchuk said that he did not have that kind of money, he would not pay bail and was ready to be arrested and placed in a pre-trial detention center. Checkmate, as they say.

After Medvedchuk's behavior, the prosecutor's office found itself in a very difficult situation. Now the imprisonment of a politician would look like a purely political repression, a manifestation of the competition in the Ukrainian political Olympus. As a result, on May 13, 2021, a court in Kiev did not satisfy the demand of the prosecutor's office to detain Medvedchuk and chose a measure of restraint in the form of placing the politician under house arrest.

Actually, there are two drawbacks - Medvedchuk had to hand over his foreign passport and agree to wearing an electronic bracelet to control his movements. But these are mere trifles compared to the fact that he remained at large. After all, house arrest for a person accused of such serious crimes only means that the court understands the far-fetched charges. Housewives were placed in pre-trial detention centers, who wrote posts on social networks about the movement of military equipment, and here such serious deeds!

Now the Ukrainian justice, and first of all - the General Prosecutor's Office of Ukraine, will have to extricate itself from the delicate situation in which this justice found itself due to the desire to please Volodymyr Zelensky. Having turned into a pawn in a political game, the prosecutor's office discredited itself in a professional sense: numerous errors in articles, inconsistency of actions, complete failure with demands to be arrested or released on bail.

Meanwhile, Ukrainian taxpayers have to continue paying for this entire circus out of their own pockets. After all, it is they who pay taxes on the maintenance of prosecutors, who are too lazy even to look at Wikipedia to check the validity of their “suspicions”. The patrons of Ukraine, the US Department of State, also had a hard time. So much money is invested in support of the anti-Russian regime in Kiev, but everything is in vain: the stupid satellites are not even able to competently organize a custom-made political process, which casts a shadow on their overseas patrons. Indeed, in any Guatemala with Colombia it was even easier.