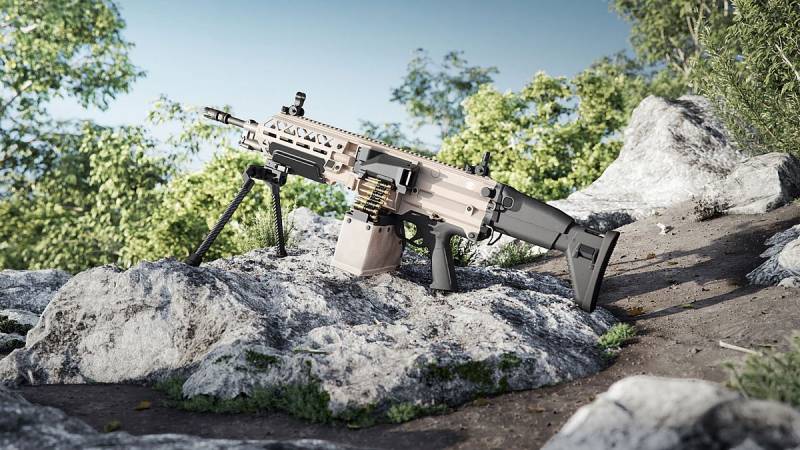 May 6, the famous Belgian manufacturer of small arms weapons FN Herstal (Fabrique Nationale) in the format of a video presentation showed the whole world a new development - an ultralight machine gun named Evolys. FN Evolys - a model of a machine gun with a belt feed system. They are already talking about the new product that it claims to be a new class in the arms world.


Such conversations did not appear from scratch. The novelty of the Belgian arms industry is distinguished by its small mass and compact size, which makes weapons akin to assault rifles. At the same time, FN Evolys retained the characteristics of full-fledged machine guns. As part of the May presentation, the public was presented with two models for the most popular cartridges today: 5,56x45 and 7,62x51 mm NATO.

The full debut of the novelty at the exhibition should take place in London from September 14 to 17, 2021. On these dates, the international arms fair DSEI (Defense Security and Equipment International) will be held in the capital of Great Britain. You can see the new ultralight machine gun live at the FN Herstal stand in the Belgian pavilion.

The emphasis of the presentation of new ultralight machine guns was made on the fact that this is practically a new class of small arms. The new items combine the capabilities of assault rifles and full-fledged machine guns with a belt-fed system. According to Yves Roskam, development manager at FN Herstal, the new light machine gun is built around a concept that assumes combat operations in dense urban areas are the rule, not the exception. 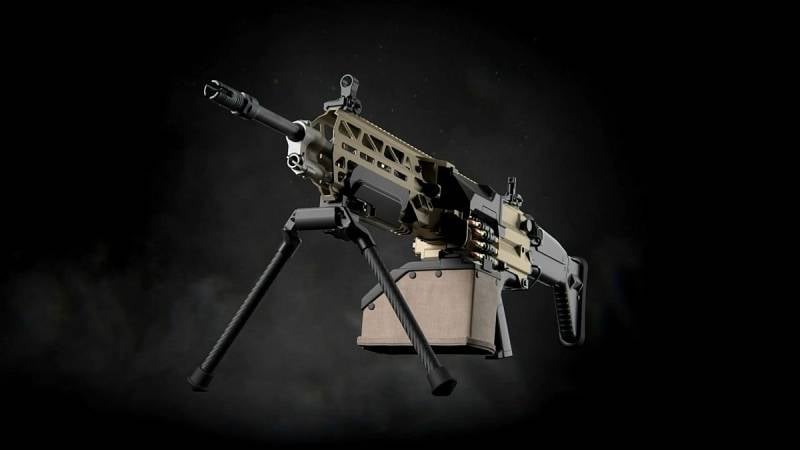 According to Yves Roskam, comprehending this fact requires the creation of mobile, rapid-fire weapon models that would provide an individual combat unit with the maximum level of firepower. According to him, the new Belgian machine gun will be equally effective in combat at a minimum dagger distance, and for aimed fire or suppression fire.

The design of the FN Evolys machine guns is based on a scheme for removing powder gases from the barrel. This is an ultralight model with a short stroke gas piston and an open breech. It is noteworthy that the machine guns are built with the borrowing of a large number of parts and assemblies from other samples of small arms from the Fabrique Nationale company. For example, a telescopic stock that can be adjusted in reach and height, sights and a receiver, similar to those found on the FN SCAR-H assault rifle.

The well-thought-out ergonomics of the FN Evolys machine guns, along with the small mass of the models, allow effective fire from almost any position. In addition, Evolys machine guns received a hydraulic recoil brake, which reduces recoil when firing and provides the weapon with a constant rate of fire.

All this allows you to combine a high rate of fire with very good accuracy. In the demo video, the shooter from his hands in a standing position fires from an FN Evolys machine gun chambered for 5,56x45 mm, calmly shooting a tape for 200 rounds. For shooting from a machine gun while lying on it, there are bipods, which are prudently made of lightweight composite materials. 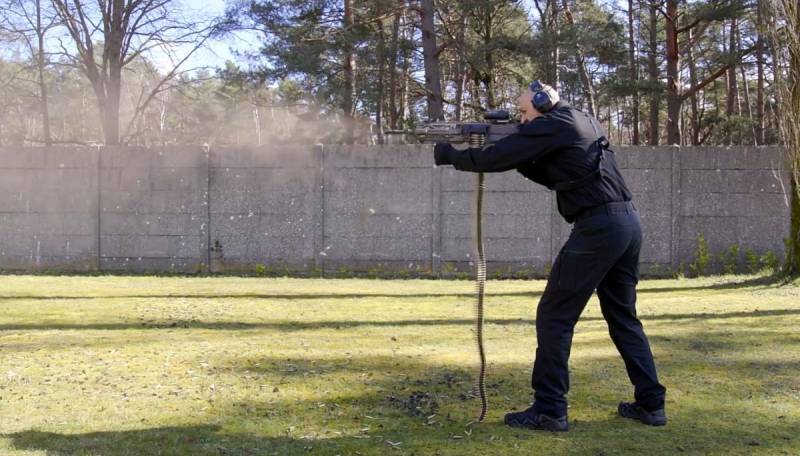 The model has a two-way switch of fire modes, which allows the fighter to choose either firing single cartridges or a fully automatic mode of operation. The features of the model include the lateral ammunition supply mechanism patented by FN Herstal. The presence of such a unit allowed the designers to install a full-fledged Picatinny rail over the receiver on the FN Evolys machine gun.

Much attention was paid to the ergonomics of the model. As with most modern western small arms, the Evolys can be controlled with only one hand. At the same time, the controls are designed for the use of weapons by both right-handers and left-handers.

FN Herstal has published the technical characteristics of the new machine guns on its official website. The model for the low-pulse 5.56x45 mm NATO cartridge seems to be the most compact and is very lightweight for belt-fed models. The declared weight of the machine gun is approximately 5,5 kg. For comparison: FN Minimi under the same cartridge or its American counterpart M249 SAW weigh about 6,5 - 6,85 kg without cartridges. 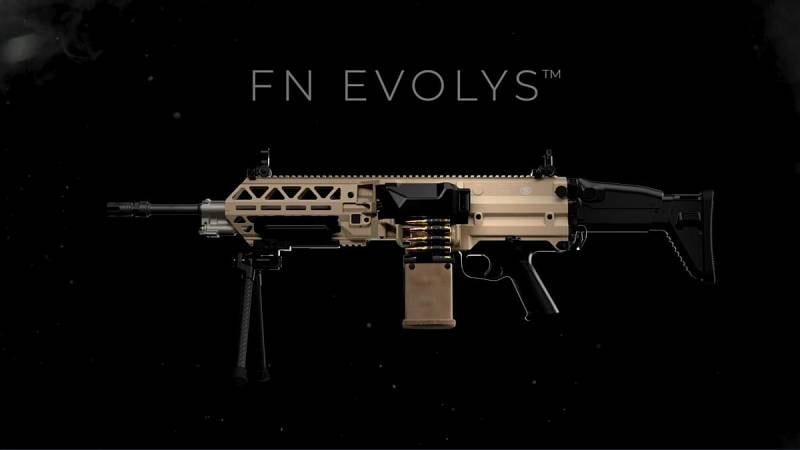 Two modes of firing are available for the machine gunner: semi-automatic and fully automatic. At the same time, the practical rate of fire is 750 rounds per minute. The machine gun is powered by belts for 100 or 200 rounds from a special box-bag, similar to that used on the FN MINIMI machine guns. The maximum effective firing range of the 5,56 mm model is 800 meters.

The FN Evolys ultralight machine gun chambered for 7,62x51 mm NATO is more massive. It weighs 6,2 kg, but it is still lighter than the smaller caliber FN MINIMI models, and almost two kilograms less than the 7,62 mm MINIMI. The maximum length of this model is 1025 mm, the shortest is 925 mm. Barrel length - 406 mm, machine gun width - 135 mm.

Power supply of this model is carried out by belts, designed for 50 rounds. These are still tapes from FN MINIMI. It is possible both a simple feed of belts and from a fabric box, the use of which also reduces the weight of the model. The maximum effective range of a machine gun chambered for 7,62 mm is 1000 meters.

The main advantages of the new Belgian machine guns are their compact size and low weight. In this regard, they successfully compete with all modern machine guns. For example: the Russian single machine gun "Pecheneg" in the bipod version weighs at least 8,2 kg with a length of 1155 mm.

On the other hand, these are models of automatic weapons, sharpened for different combat missions. The Russian single machine gun has a longer barrel - 658 mm and a greater effective firing range - 1500 meters. But naturally, it is less suited for operations in dense urban buildings and enclosed spaces. 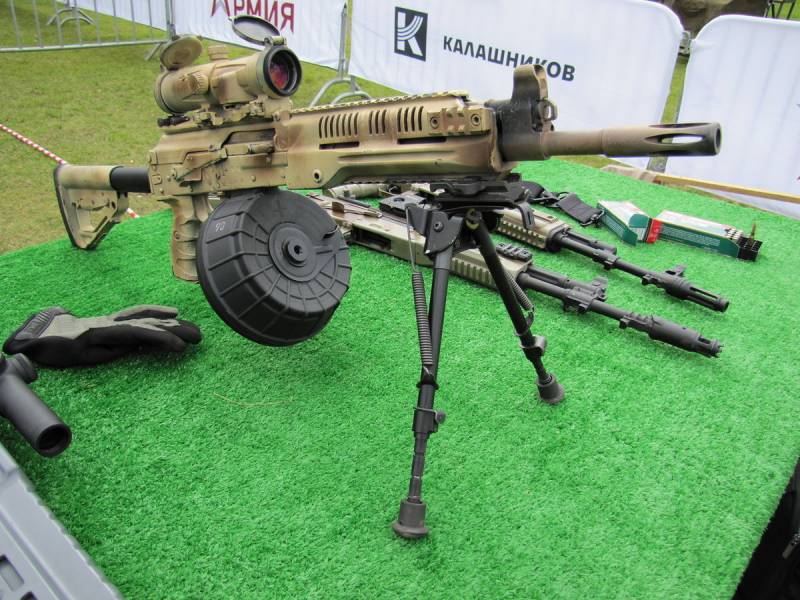 RPK-16 with a drum magazine for 96 rounds
The new Russian RPK-16 light machine gun will be able to compete with the new ultralight Belgian machine guns. This model was originally developed as a Russian analogue of foreign machine guns chambered for the low-pulse 5,56 × 45 mm cartridge - FN Minimi and M249, which combine high firepower and excellent mobility.

In terms of its dimensions, the RPK-16 chambered for 5,45x39 mm is as close as possible to the presented FN Evolys. At the same time, the Russian machine gun is also lighter - it weighs about 4,5 kg. At the same time, Russian designers abandoned tape power supplies. RPK-16 is compatible with standard magazines for AK-74 and RPK-74. That is, box magazines for 30 or 45 rounds are available for it.

Also, a drum magazine for 16 rounds was created specifically for the RPK-96. The machine gun with this store has already been demonstrated at exhibitions many times. The declared rate of fire of the RPK-16 is approximately 700 rounds per minute.