Heavenly patron of the Russian land

Entry of Alexander Nevsky to Pskov after the Battle on the Ice. V.A.Serov. 1945 g.

800th anniversary of the birth of the Russian prince Alexander Yaroslavich. Prince Alexander Nevsky is one of the most prominent figures in our stories... And it connects the most different and dissimilar epochs - medieval Russia, the Russian Empire, the Soviet Union and our time.

Nevsky in our history

The prince was born on May 13, 1221. According to the old historiographic tradition, the date of his birth is May 1220. The son of the Pereyaslavl prince (later the Grand Duke of Kiev and Vladimir) Yaroslav Vsevolodovich and the Toropets princess Rostislav Mstislavna, daughter of the prince of Novgorod and Galician Mstislav Udatny. Grandson of the Grand Duke of Vladimir Vsevolod the Big Nest.

It fell to Alexander Yaroslavich to rule the Russian lands at a difficult, turning point in history, which coincided with the years of his Novgorod, and then Kiev and Vladimir reign. His father Yaroslav took over the Kiev table in 1236, and the Vladimir one in 1238. Russia at that time was defeated by the "Mongols" of Batu (Why did they create the myth of the "Mongol" invasion?). Kiev was weakened, deprived of its former power, wealth and populace by the previous princely strife and wars. The Horde ended his fall. Burned and devastated Kiev lay in ruins (Capture of Kiev. War of Pagan Rus with Christian Rus).

The death of this city in December 1240, like the death of countless Russian cities earlier, in particular, Pereyaslavl South and Chernigov, marked the final decline of the once mighty Kievan Rus. The possession of Kiev has lost all spiritual, military-political and economic value. Therefore, Yaroslav, when in 1243 the Horde approved him as the oldest prince in Russia, did not go to Kiev, put his governor there and chose Vladimir as his residence. As a result, Vladimir on the Klyazma became the capital of Russia.

Alexander will also confirm this. In 1249 he will receive the title of the Grand Duke of Kiev. But he did not even visit the Kiev he inherited. The ancient Russian capital has completely lost its former grandeur and splendor. And for a long time it became a small provincial town. Half a century later, Metropolitan Maxim of Kiev moved his residence from Kiev to Vladimir. So the spiritual center of Russia moved to North-Eastern Russia.

This was not the end of Russia. The spiritual, sacred center of Russia moves to the northeast. The Novgorod land escaped the invasion of Batu's troops. Many of the ruined "nasty" Russian cities of Ryazan, Murom, Vladimir-Suzdal lands were able to rebuild, life is gradually reviving in them. North-Eastern, "Zalesskaya" Russia was the first to take the blow of the "Tatars", and the first to recover from the invasion. New waves of immigrants flocked here (earlier they left the Polovtsian raids in the northern forests) from the later ruined principalities and lands of Southern and Western Russia.

Russian princes recognize the power of the Horde, their vassal position. This gave a certain degree of security and stability. Alexander Nevsky's father, Yaroslav Vsevolodovich, became the first of the Russian princes who accepted from the hands of the Horde Tsar Batu the label for the great reign of Vladimir. In Russia, the previous structure of power was preserved. He was poisoned by the Horde in the fall of 1246. Only in the spring of next year, his body was brought to the capital city of Vladimir, where he was buried in the white-stone Assumption Cathedral.

To continue the policy of his father, in essence, to develop the foundations of the policy of Russia in the new conditions of the rule of the Horde, had to the Grand Duke Alexander. It was about the very existence of the then Russia. Will she be able to survive, preserve her statehood, organization, faith? In particular, a number of Rus' neighbors lost not only their independence, but also their cultural identity. The Volga Bulgaria (Bulgaria), a longtime neighbor and enemy of North-Eastern Russia, ceased to exist. Bulgars will become part of the population of the Horde Empire, lay the foundation for the ethnos of the Kazan Tatars. Numerous Cumans disappeared from the map of the southern part of Eastern Europe. Some of them flee to Western Europe, Byzantium and the Caucasus, the majority will become simple "Horde". 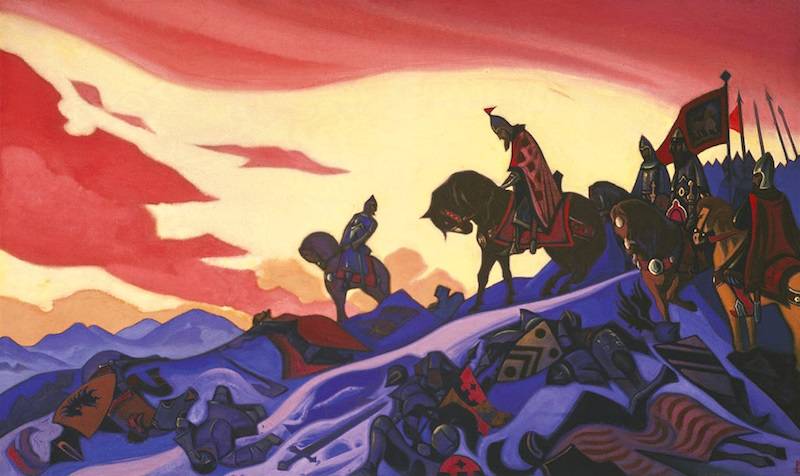 Prince Alexander Yaroslavich received the nickname Brave or Nevsky. At that time he was, undoubtedly, the strongest prince of Russia. Despite the fact that he was still young (at the time of his father's death he was 26 or 25 years old), he had great victories behind him, which glorified his name for centuries. The defeat of the Swedish discoveries on the Neva River in the summer of 1240 and the victory on the ice of Lake Peipsi over the German knights of the Livonian Order in 1242. Later than other princes, he went to bow to the king Batu. But he was recognized as the Grand Duke of Kiev and received "the entire Russian land." At the same time, Alexander enjoyed the special favor of the Horde king Batu, became a twin brother of his eldest son and heir Sartak. After their death he enjoyed the support of Ulagchi and Berke khans.

The reign of Alexander Yaroslavich was a turning point in Russian history. It was under him, in the 1250s - early 1260s, that the Horde's power over Russia was finally formed. The foundations of the Russian-Horde Empire are being formed. Symbiosis of Eastern Rus, pagan Horde (The myth of the "Mongols from Mongolia in Russia"; Russian-Horde Empire) with the Russes of Vladimir, Ryazan and Novgorod, the Russians-Christians and the two believers, who retained a pagan worldview. It is this alliance that will allow Russia to repulse the attempts of the West to baptize the Russian lands with “fire and sword, to enslave and colonize Russia. Unfortunately, in the future the Horde will be Islamized and Arabized. This will cause a series of severe troubles and the collapse of the Horde Empire. And the center of the northern, Eurasian empire will gradually move to Moscow.

The Horde tsars did not interfere in the internal life of the Russian Christian principalities, their structure, faith. They only demanded recognition of the supreme power, issuing a label-letters for the great reign, tribute-tithes for the maintenance of the army. Population censuses were conducted to determine the tribute. The first census was carried out in 1257–1259. with the direct fate of Prince Alexander. First, the "Tatar" officials (Baskaks) settled in large Russian cities, the "Great Baskak" was in the capital Vladimir. They collaborated with the Russian princes and, if necessary, "corrected" their policies, often at the request of the Russian rulers themselves.

Under Alexander Yaroslavich, the Horde army, which had only punitive functions, the so-called Nevryuev army of 1252, came to Russia for the first time. After her, Alexander completely occupied the table in Vladimir, before that he shared it with his brother Andrey. Obviously, the Horde intervened in Russian affairs in order to establish the supreme power of the more loyal and reasonable Alexander. Instead of his brother Andrew, who decided to revolt against the Horde king. Subsequently, the use of "Tatar" troops in the struggle with each other became commonplace for Russian princes, as they had previously used the Polovtsian regiments. These Horde armies were brought to Russia by the Russian princes themselves. Later, in many respects, it was with the help of the Horde troops that Moscow's power in North-Eastern Russia would be confirmed. Power over Russia and then the Horde (under Ivan the Terrible) will be given to the descendants of Alexander Nevsky's youngest son, Daniil Alexandrovich of Moscow. This is the historical picture. 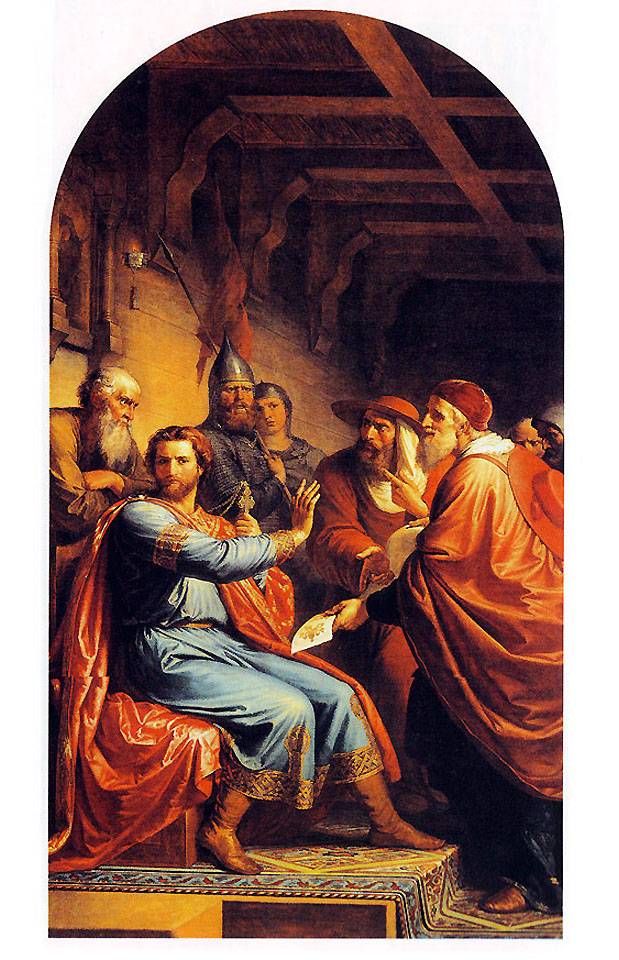 Therefore, Alexander Yaroslavich is so hated by various liberals, Westerners, just people with a narrow mind who believe that the prince should have rebelled against the Horde and fell in an unequal battle. It was Alexander who made the historic choice between West and East. He recognized himself as a vassal of the Horde, made Russia a part of the East. Northern Russia decisively rejects a possible alliance with the Latin West. Alexander gave a decisive rebuff to the Swedish and German crusaders, feudal lords who wanted to enslave the Russian lands.

There is information about two letters of Pope Innocent IV to Alexander Nevsky. The Russian prince was offered to submit to the Roman throne, to conclude an alliance against the Horde. It is obvious that he, like Prince Daniel of Galitsky, was offered to become the king of Russia. It is clear that it was "bait". In particular, one can recall the fate of the Slavic-Russian tribes in Central Europe (modern Germany, Austria), which were either physically destroyed or enslaved and rather quickly assimilated, deprived of their faith, language and culture. We have become "Germans" - dumb. The same fate befell numerous Rus - Porus (Prussians) in Prussia-Porussia. The western branch of the glades, the Poles, underwent Catholicization and turned into a "battering ram" directed against Russia-Russia. The Baltic tribes, akin to the Slavs, in the Baltic region underwent Germanization and Westernization. They were turned into slaves of the German barons.

Thus, if Alexander Nevsky chose the West, Russia could well lose its essence. The Russian civilization and the Russian super-ethnos would perish, partially subject to enslavement and assimilation, becoming ethnographic material in the hands of Rome (the then command post of the West).

Hence the hatred and attempts to denigrate Alexander Nevsky on the part of lovers of the West and the "world community". Cosmopolitan Westerners. Indeed, in his Western politics, Alexander Yaroslavich will show himself to be a decisive and uncompromising ruler. He successfully resisted any attempts by the West (the Livonian Order, Sweden, Lithuania and Rome) to take advantage of the weakness of Russia, subjugate it to his influence, and seize the western and northwestern regions. He saved Russia from new pogroms by the Horde. By military force, trade and diplomacy, he strengthened his position in the North and West. This policy of the Grand Duke will be continued by his successors in the Grand Duke of Vladimir, then in Moscow.

In his policy, Alexander will receive the full support of the church. The union of church and state will be consolidated. Spiritual power will become a reliable support of the great princes, heirs of Alexander, in their struggle for the unification of Russia and in the movement to the East when the Horde kingdom collapses.

It is not surprising that Alexander Nevsky is not just an outstanding commander and politician, the greatest statesman of a turning era in the history of Russia. He is one of the most revered Russian saints, the heavenly patron of the Russian land. His veneration as a saint apparently began immediately after his death. Several decades later, the life was compiled, which was subsequently repeatedly altered, revised and supplemented.

The official canonization of Alexander took place in 1547, at a church council convened by Metropolitan Macarius and Tsar Ivan the Terrible. It is very symbolic that it was under Ivan the Terrible that Russia and the Horde again became a single empire, combining two ancient traditions.

The Church glorifies in equal measure both the military valor of the prince, "who is never conquered in battle, but always overcomes", and his feat of meekness, patience and humility. In the spiritual and, therefore, deeper history of Russia, Alexander Nevsky forever remained after his death the defender of the Motherland, a warrior and intercessor of Russia. 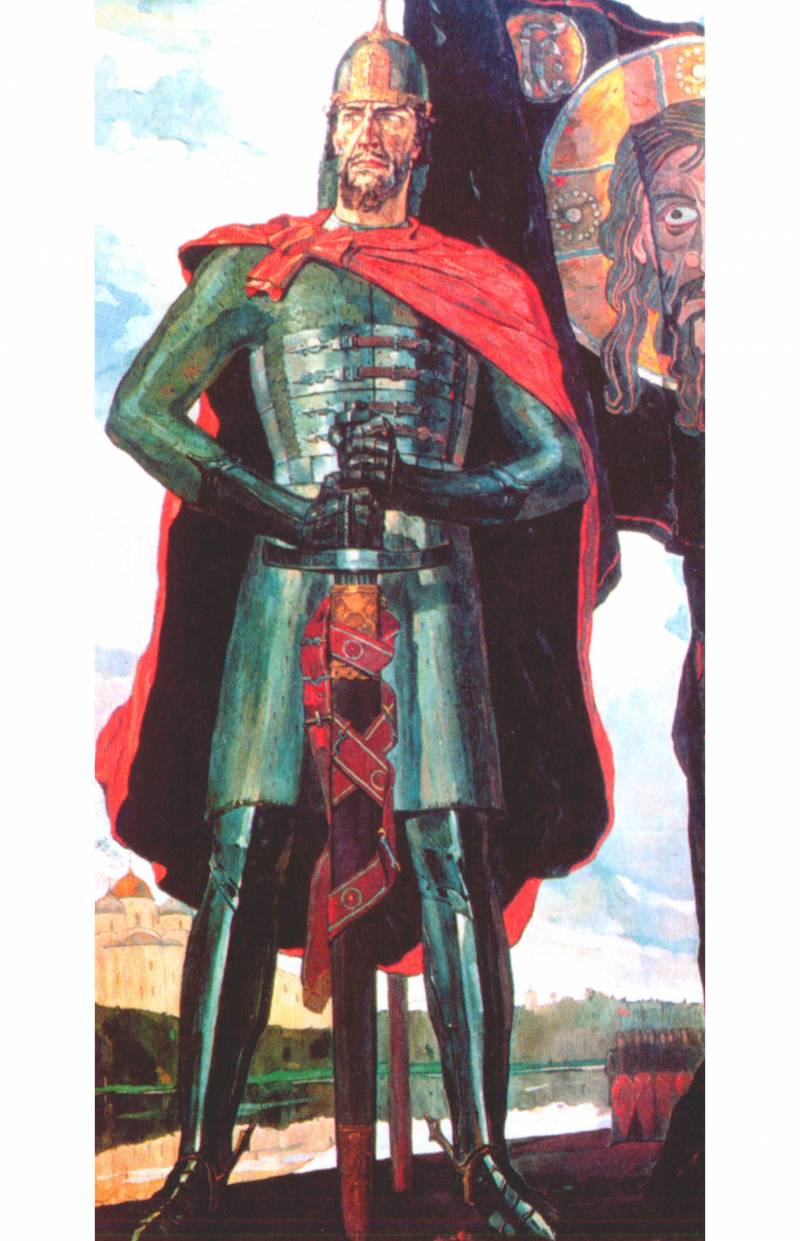