On May 15, 1945, the last group of cargoes from the "Netherlands East Indies" (since 1949 - Indonesia) arrived in Vladivostok (pictured - the port during the war) as part of lend-lease goods from the USA, Canada and Australia. The incoming consignment consisted of tin ore, cobalt briquettes, lube oil, raw cane sugar, knitted fabric, palm oil, tea and coffee.

These valuable cargoes were contracted by the Americans under Lend-Lease from the Dutch authorities back in mid-1942. But by that time, Japanese troops had captured almost the entire Dutch East Indies. Except for a small southeastern region in the Dutch - western region of New Guinea, which "held out" until the surrender of Japan.

Dutch goods had to be evacuated at the end of 1942 to the depots in the port of Cairns in northeastern Australia. At the end of April 1945, the same cargoes were included in the aforementioned convoy to Vladivostok.

Soviet-Dutch diplomatic relations were established only on July 10, 1942, when the small metropolis had already been under occupation for two years. However, trade between the USSR and the future Indonesia has been going on since the early 1930s.

At least 70% were the same cargo as mentioned above (with the "addition" of raw cotton, fabrics, leather goods, fish products, citrus fruits and bananas). At the same time, there was no Soviet export to the Netherlands East Indies (NOI). 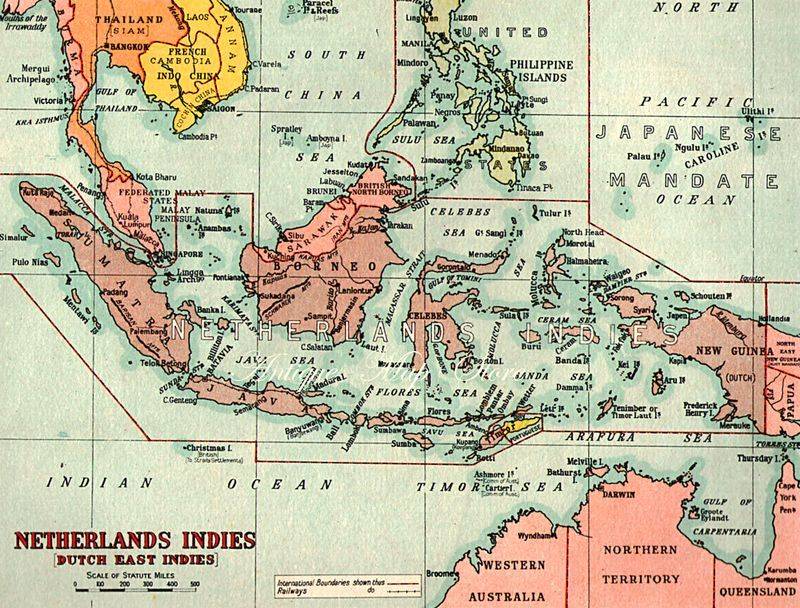 The USSR was ready to pay off such suppliers in gold, but the example of the "senior" allies dictated - Lend-Lease. All accounts and accounts were undoubtedly postponed until after the war.

The share of Lend-Lease cargo contracted by the British and Americans for the USSR in the NOI, in deliveries from this region of Holland in 1941-1942. was over 70%. Deliveries were made to Vladivostok; in winter 41/42 about a quarter of supplies to the USSR from NOI went through Iran.

Plus, as part of lend-lease supplies (within the framework of the total US and Canadian quota for the USSR), oil products were sent to the USSR from the refineries in the Dutch South Caribbean islands of Aruba and Curacao, and from the South American "Netherlands Guiana" (since November 1975 - Republic of Suriname) - bauxite.

Bauxite supplemented with Guiana-based North American aluminum. Let us explain: the supply of aluminum to the USSR in September 1941 - October 1945. from the USA and Canada amounted to almost 330 thousand tons - a third more than the USSR produced during that period.

Of all the European countries participating in the anti-fascist coalition, practically only the Netherlands, together with the colonies, had to suffer the greatest occupational damage. France, Belgium, as well as Denmark and Norway were looted by the Nazis less openly, but only because the situation did not allow them.

Germany and Japan occupied almost 90% of the total territory and over 90% of the total population of Holland and its colonies. Such a catastrophic situation is described in detail in the book "Neerland's Zeemacht in Oorlog" (London, Netherlands Publishing Co, 1944) of the 1st rank of the Dutch Navy (in the 40s - 50s), military historian André Kroose: 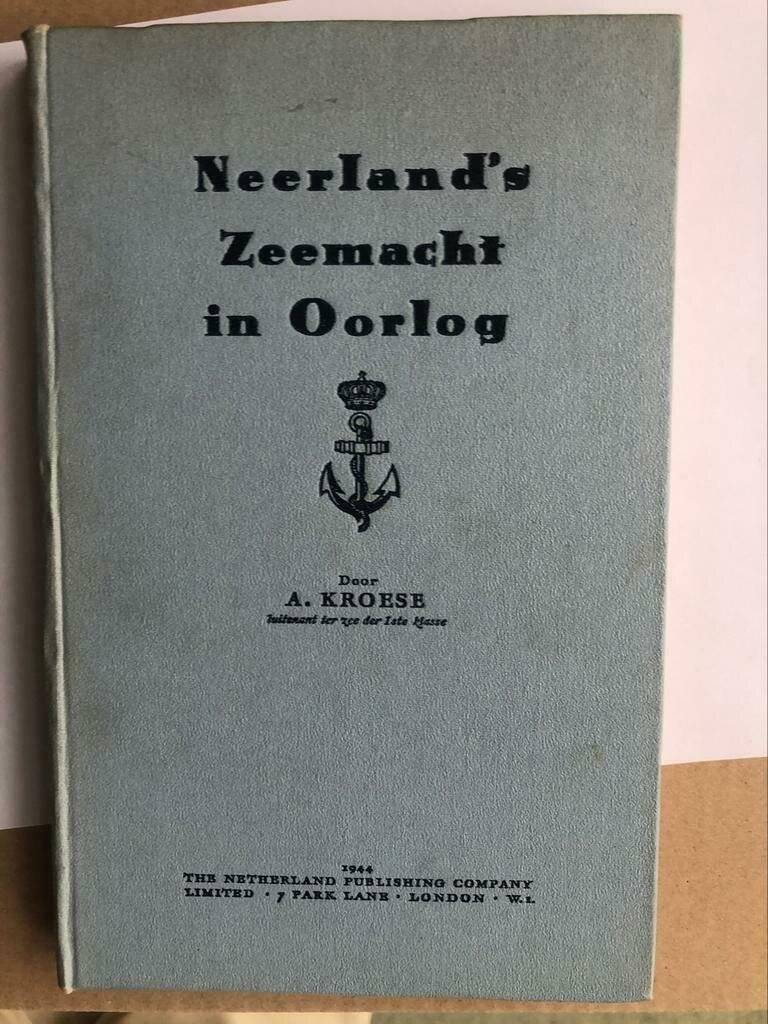 “... The occupation of Holland was a real disaster for the Dutch East Indies. But when Holland was attacked in May 1940, 22 German ships with a total displacement of 135 tons were captured in the East Indies. They were a significant addition to the Allied naval forces in the region.

Increase plans fleet, which the Dutch government approved in 1937, also provided for the defense of the East Indies. But over 30 ships (military and dual-use), which were under construction in 1940, were lost during the Nazi invasion of the metropolis. And at the NOI shipyards, the construction of torpedo boats has been accelerated. "
A. Kroose clarifies that,

“Despite all the defensive innovations that had been introduced in the East Indies since the fall of Holland, the air and especially the naval force that defended the eastern part of the Dutch Empire had already decreased so much by the end of December 1941 that there could be no question of defending a huge an archipelago, equal in size to the European continent, from a strong aggressor. When the territories of the Kingdom itself in Europe and the Far East are in the hands of the enemy, it is hardly possible at all to increase the size of the Dutch armed forces. And make up for the loss. " 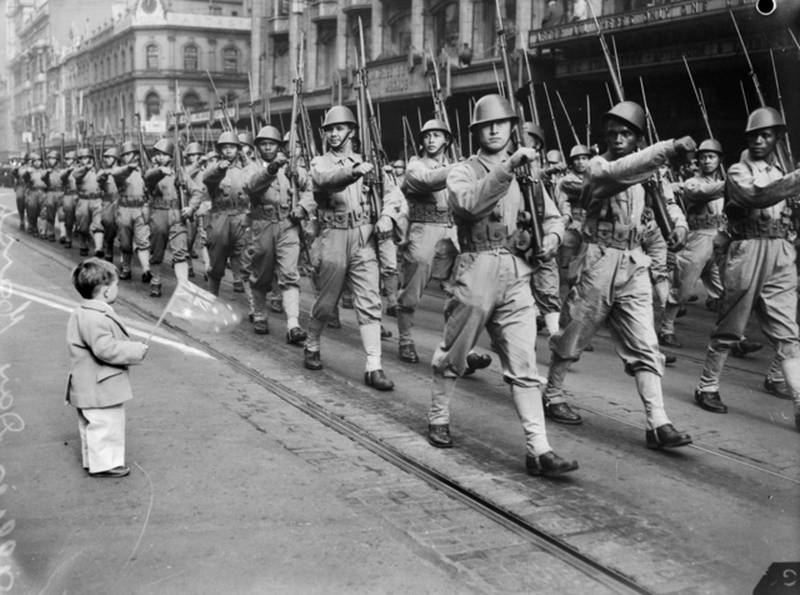 Batavia (Jakarta, September 5, 1945 Parade of Dutch troops arriving from northern Australia
Nevertheless, the "Netherlands East Indies" returned to the control of the metropolis from the date of the Act of surrender of Japan on September 2, 1945 (on behalf of the Netherlands, the Act was signed by Admiral-Lieutenant of the Navy Konrad Emil Lambert Helfrich). Which soon turned into a five-year war with Indonesian nationalists.

This war was lost by the Netherlands - primarily "thanks" to the USSR and the PRC. Until August 1962, only the "Dutch West Irian" remained under the control of Amsterdam in the former NOI - the western region of the island of New Guinea, the largest European possession in Asia and Oceania.

Despite the possibly explainable "offense" against the USSR, the NII and the Dutch government in London have never officially denied the decisive role of the USSR in the world war. So, the governor of the Dutch East Indies in 1941-1948. Lieutenant General Hubertus van Mook said on November 24, 1942, at a meeting of the Allied Command in Southeast Asia and the Pacific:

“... Tokyo does not respond to Berlin's requests for a demonstration of Japanese military force near the borders with the USSR or Mongolia. Because Stalingrad will force Japan to increase its political distance in alliance with Germany and soon go on the defensive in many, if not all sectors of the Asia-Pacific front. "
Van Mook turned out to be a visionary: all this in Japanese politics took place already from the beginning of the Soviet counteroffensive at Stalingrad. We also consider it necessary to cite his opinion on the Soviet experience of evacuating hundreds of industrial enterprises to the rear regions of the country:

“... In the winter and spring of 1942 from Java, Sumatra, Celebes and West Irian (regions of the Netherlands East Indies. - Ed.), Over 20 enterprises, a large number of refugees and workers of local administrations were transferred to the North of Australia. This was helped by the study of large-scale evacuation measures in the USSR, which were successfully implemented in 1941-1942. " 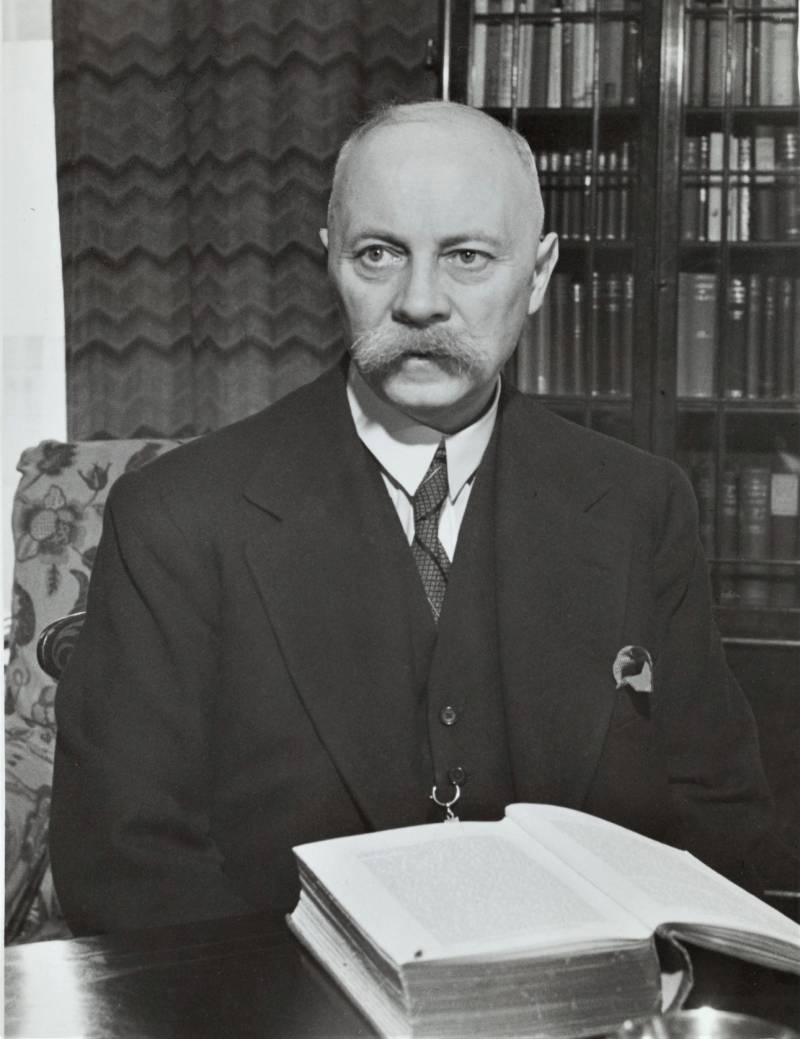 “... At this moment, when the Soviet armies are threatening all Nazi positions in Ukraine, I send sincere congratulations to Your Excellency and the Russian people on the occasion of your great victories. At the same time, I want to express our admiration for the successes achieved by you personally, together with the Russian people, in the course of this fierce struggle. And convey to you our heartfelt wishes for the prompt liberation of your invaded territories. The dimensions in which German war materials and manpower are being destroyed along a wide and ever-expanding front testifies not only to the bravery of the Russian soldier and the skill of his leaders. But also about the magnificent achievements of the Russian workers (highlighted VO), whose industrial power the Nazis so often declared “destroyed”. I am sure that just as in February and March, when underground fighters in Holland wrote the word "Stalingrad" in chalk on the walls and sidewalks, so now and for the coming weeks, the names of your liberated cities will sound like a challenge to the Nazis in Holland. "
Stalin's reply on September 21 was succinct:

"Thank you for your message on the successes achieved by the Red Army." 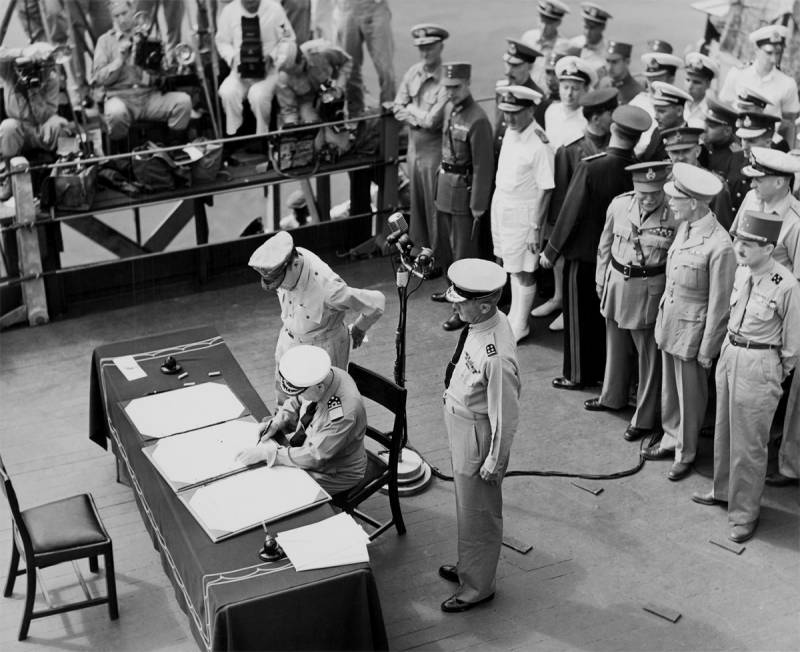 Admiral-Lieutenant Konrad Emil Lambert Helfrich of the Royal Navy signs the Act of Surrender on behalf of the Netherlands, September 2, 1945, aboard the battleship Missouri