14 May 2021
7
The fifth armored rally "The Road of Courage", timed to coincide with the 80th anniversary of the Battle of Smolensk in the Great Patriotic War, will take place from 8 to 13 July.


The participants of the armored rally will travel 1300 km on demilitarized and military vehicles along the route Moscow-Rzhev-Vyazma-Smolensk-Bryansk-Lyudinovo-village Petrishchevo-Moscow. 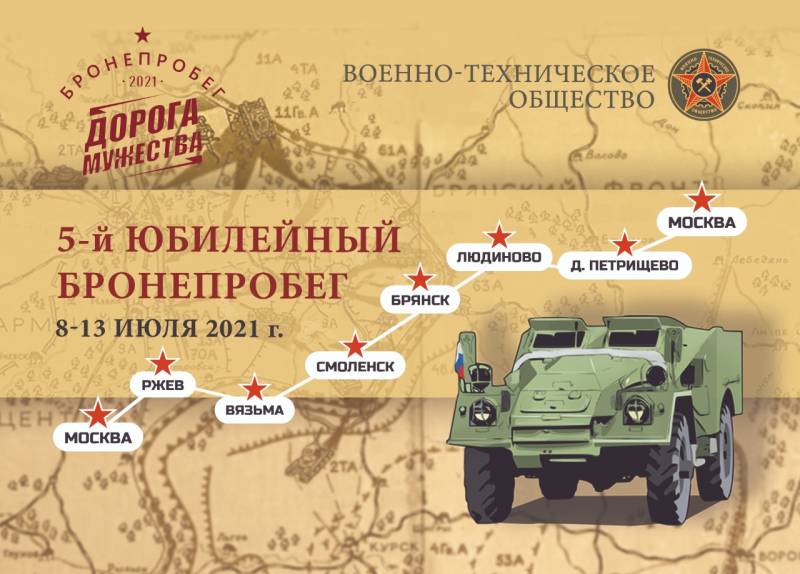 In each of the cities, flowers will be laid at the memorials of fallen Soviet soldiers, visits to places of military glory, as well as a presentation of armored vehicles. The events will be held jointly with regional and municipal authorities, museums and public organizations. On the way back to Moscow, the protesters will visit the Zoya Kosmodemyanskaya Memorial Museum in the village of Petrishchevo.

For the second time, Rosgvardia armored vehicles - SBM VPK-233136 "Tiger", "Ural-VV", "Patrol", will take part in the race. For the first time, the distance "Roads of Courage" will be overcome by UAZ-469 - a mine detector, URAL NEXT of a new generation of JSC "Automobile Plant" URAL ", new vehicles of the Ministry of Defense of the Russian Federation - KAMAZ-63968 (" Typhoon-K "6X6), KAMAZ-53949 (" Typhoonok " ), Repair and recovery vehicle REM-KL.

Another newcomer is the 5 ZIS-1942 car. It is the oldest vehicle of the Armored Race. According to its owner, restorer Alexander Trushin from Ivanovo, the car took part in real battles near Smolensk.

“There are even traces of bullets on it, I didn’t remove them during the restoration, which took me 2,5 years. After the war, the ZIS-5 was used as a fire engine, and then the car ended up in one of the museums of the Chita region, from where I brought it. All spare parts for the ZIS-5 are native, I was looking for them all over the country. I had to change about 50% of the parts, as well as the wooden frame, which rotted great. I have not changed the metal. Therefore, there is practically no remake in the car. I believe that a car should have a soul, its own история", - said Alexander Trushin.

In 2021, the armored rally may regain its international status - the participation of crews from the CIS countries is planned.

“Unfortunately, last year, due to COVID-19, the borders were closed and our friends from Belarus, Kazakhstan and Kyrgyzstan were unable to take part in the armored rally. I hope that this year the epidemiological situation will allow them to come to Russia and take part in the jubilee run, which will become a record number of units of demilitarized and military equipment. The convoy will include 24 vehicles, not counting the escort vehicles, "said the organizer of the armored rally, President of the Interregional Public Organization for Assistance to the Study and Operation of Military Equipment" MILITARY-TECHNICAL SOCIETY "Alexey Migalin.

The jubilee armored rally will be held with the informational support of the federal news agency REGNUM, the automobile portal Motor1.com, the magazine Technics and Arms, Avtoradio, RT, Auto Mail.ru.

Battle of Smolensk (Smolensk strategic defensive operation) - a complex of defensive and offensive actions of the Red Army against the German Army Group "Center" and partially the Army Group "North" in the period from July 10 to September 10, 1941. A huge territory with an area of ​​600-650 km along the front and up to 250 km in depth became the site of fierce battles, in which Soviet soldiers demonstrated an example of unprecedented courage and love for the Motherland. More than 485 thousand Soviet soldiers died in the operation. The German offensive on Moscow was delayed for two months.

Ctrl Enter
Noticed oshЫbku Highlight text and press. Ctrl + Enter
We are
"Typhoon-K" K-53949 and "Typhoon-Airborne" K-4386 for the first time will take part in the armored race "Road of Courage 2018"Bilzho spoiled: "This is not a feat (Zoya Kosmodemyanskoy), this is a clinic"
Military Reviewin Yandex News
Military Reviewin Google News
7 comments
Information
Dear reader, to leave comments on the publication, you must sign in.