Heavy naval artillery systems of Russia and Germany during the First World War: work on mistakes 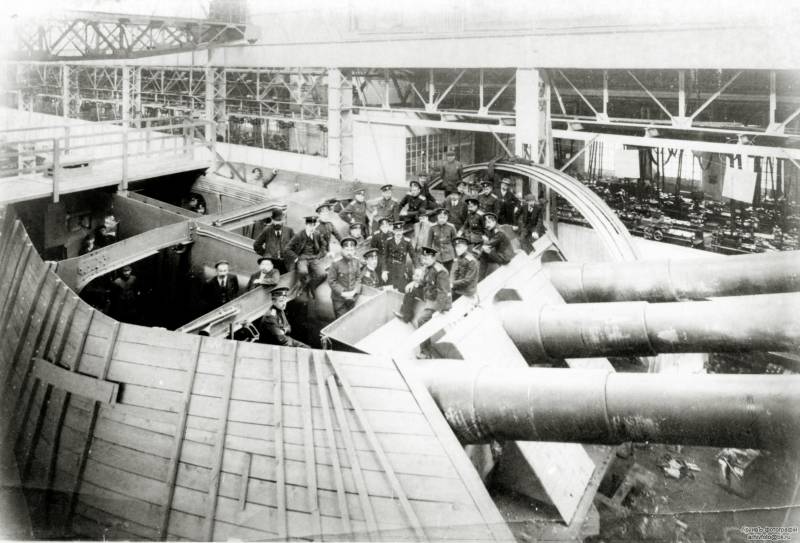 This material is a work on errors and corrects inaccuracies I made in the article "Russian and German large-caliber naval guns of the First World War", and also provides additional information that I did not have at the time of writing.


In the very first lines, let me express my deep gratitude to the respected Undecim - a person whose comments are often more informative than the articles under which they are written, and without whose help this article would not have been published. I would also like to thank the esteemed Macsen_Wledig, whose comments and materials allowed me to clarify a number of unclear questions for me. I also thank all the other commentators who constructively criticized the article.

Unfortunately, my earlier calculations of the armor penetration of our famous twelve-inch gun turned out to be somewhat overestimated. This is connected with this.

For the calculations, I took, without further ado, data on the maximum firing range of Russian dreadnought guns of 132 cables (kbt) at an elevation angle of 25 degrees, which are ubiquitous in sources. These data were fully confirmed by information provided by one of the largest domestic experts in the field of naval artillery of his time, professor of the RKKA Naval Academy L. G. Goncharov in his monograph “Course of naval tactics. Artillery and Armor ". This work provides data with reference to the "Basic shooting tables", compiled on the basis of real range shooting, which at an elevation angle of 24 degrees 45 minutes. (24,75 degrees.) The firing range was 130 kbt. 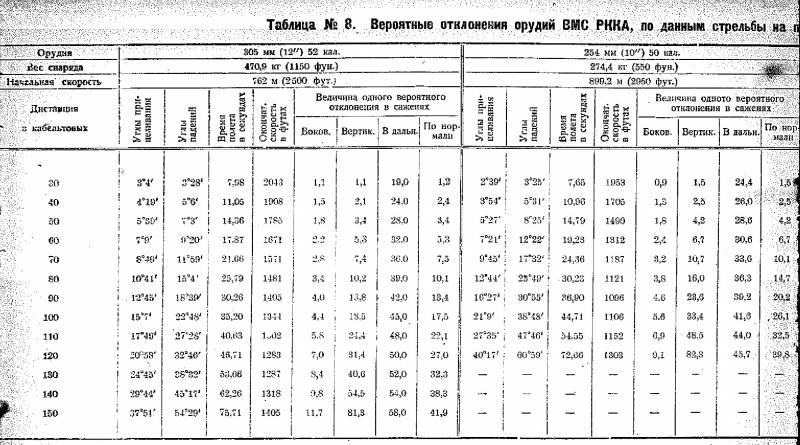 Alas, this was my mistake.

The thing is that I used the so-called international cables for the calculation (1/10 of a nautical mile, that is, 185,2 m). While it was necessary to use artillery, equal to 182,88 m. With the specified amendment, starting from the data of L. G. Goncharov, the estimated firing range at a maximum elevation angle of 25 degrees will be 130,68 artillery cables or 23 898 m.

I must say that there are other data that give an even shorter firing range of the Obukhov XNUMX-inch gun. The source is more than reliable, it is: 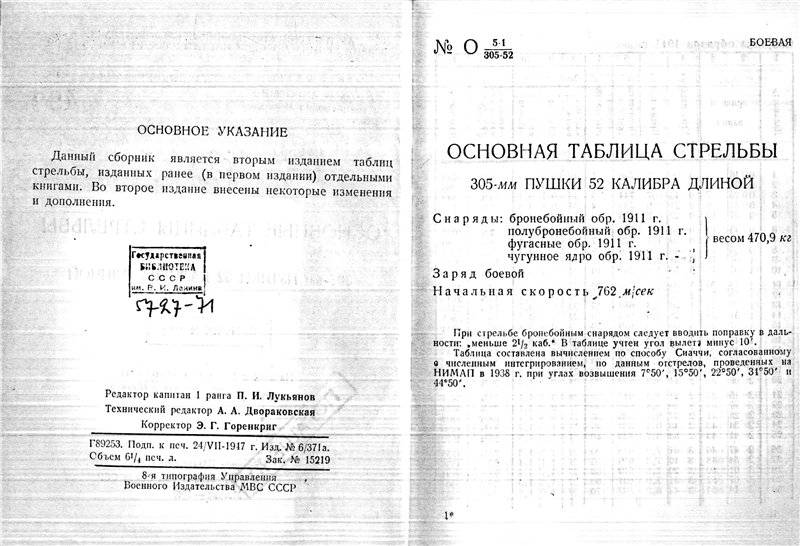 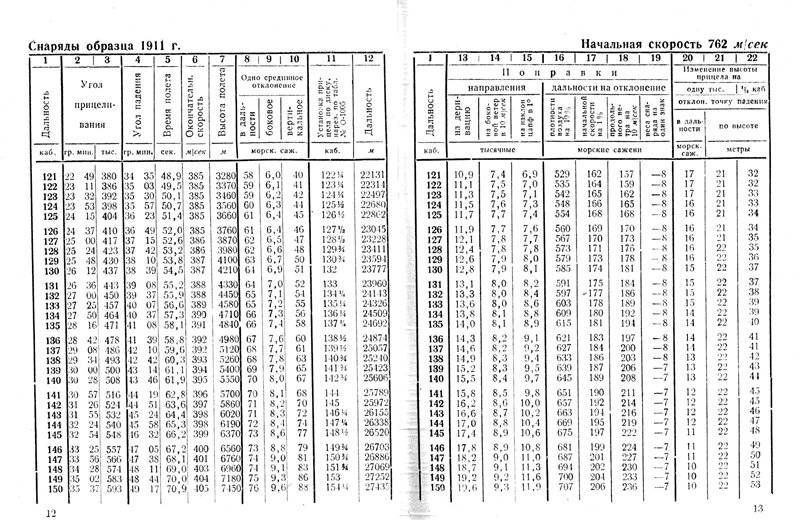 But I still use the data of L.G. Goncharov for further calculations, and here's why.

His work was written in 1932. The "main shooting tables" from which he took the data, obviously, were compiled even earlier. At the same time, the document showing 127 kbt is based on the 1938 shooting. By this time, the guns should have already had a certain wear and tear, it is possible that the compositions of the propellants changed, there could be other reasons, as a result of which the firing range decreased slightly by the end of the 30s. We are interested in the capabilities of the Russian 305-mm / 52 gun during the First World War, and not at all on the eve of the Great Patriotic War.

It also became possible to clarify some points regarding shells for our 305 mm / 52 cannon. For her, high-explosive and armor-piercing shells mod. 1911, which had the same mass of 470,9 kg. At the same time, the content of explosives in the armor-piercing projectile was 12,8 kg, and not 12,96 kg, as I indicated earlier. There were no semi-armor-piercing shells. But there were two types of high-explosive shells: one (drawing No. 254) had 61,5 kg of explosives, the second (drawing No. 45108) - 58,8 kg. It is interesting that the "Album of Naval Artillery Shells", from which these data were taken, also reports on the presence of 305-mm high-explosive shells of American and Japanese (!) Manufacture. Their weight is also 470,9 kg, and the content of explosives is 41,3 and 45,9 kg, respectively.

The Germans themselves in the documents measured the caliber of the guns in centimeters. And these guns were designated by them as "28 cm". Nevertheless, sources often indicate both 279 mm and 280 mm and 283 mm. Not knowing which option is correct, I took 279 mm for my calculations, since a reduced caliber with the same projectile mass and speed on the armor maximizes armor penetration, and I did not want to "play along" with the Russian armor. Nevertheless, exactly 283 mm is correct.

Nevertheless, according to my earlier calculations, a 302 kg projectile when fired from a 283 mm / 45 gun had a shape factor of 0,8977. And when firing from a 283 mm / 50 gun - 0,707. I noted this oddity in the previous article. But I could not find out the reasons for such a significant discrepancy. Now, thanks to the help provided to me, it seems that I managed to figure it out.

As you know, the last series of German battleships, armed with 283 mm / 40 guns, were equipped with shells weighing 240 kg. According to many sources, with the beginning of the construction of dreadnoughts and the transition to a more powerful 283 mm / 45 gun, the Germans also created a more powerful projectile for them, whose weight reached 302 kg.

However (according to the data provided by the respected Undecim) between 240 kg and 302 kg shells there was still some "intermediate" 283-mm shell.

This is probably why the Germans switched to 302 kg shells. They were significantly longer - 3,3 caliber for armor-piercing and 3,57 for semi-armor-piercing projectiles versus 2,9 and 3,21 for 285 kg shells, respectively. They were also, so to speak, more "sharp-nosed" - the radius of the ogival part for 302 kg of shells was 4 versus 3 for 285 kg of shells. Thanks to this, the aerodynamic quality of 302 kg of projectiles has improved significantly.

There is speculation that the new 302 kg projectile is an old 285 kg projectile, which has been fitted with a different ballistic cap. But this is somewhat doubtful. The fact is that, according to the data I received, there were 2 types of armor-piercing 302 kg shells. Moreover, the mass of the explosive in one of them was 7,79 kg of explosive (2,58%), and in the other - even 10,6 kg (3,51%). At the same time, a semi-armor-piercing (high-explosive?) 302 kg German projectile had 20,6 kg of explosives (6,82%). Thus, the 285 kg and 302 kg projectiles differed not only in mass and shape, but also in the content of explosives in the projectile, which does not allow us to speak of them as the same ammunition.

When did the transition from 285 kg of projectile to 302 kg take place?

Alas, I cannot give a precise answer to this question. Presumably, no later than 1915. But it is possible that this happened even earlier. It may well be that before the outbreak of the First World War. Probably 285 kg shells were unloaded from ships fleet and handed them over to coastal artillery.

In order not to multiply entities beyond what is necessary, in my calculations I will not take into account 285 kg shells at all. And I will take the form factor of 302 kg of the projectile as the best of the calculated ones, that is, 0,7196.

To calculate the armor penetration of this, in every respect, outstanding, German artillery system, I took the data of G. Staff - the firing range of a projectile weighing 405 kg in 19 100 m at an elevation angle of 13,5 degrees and an initial speed of 875 m / s. The shape factor of the projectile was 0,7009. 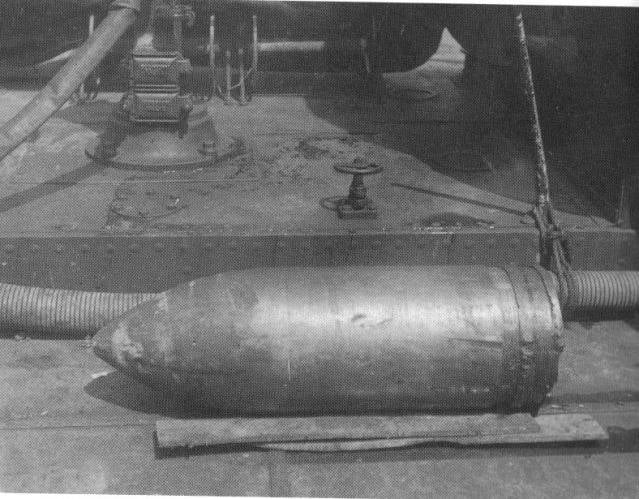 German 305 mm shell. Photo source: wargaming.net
However, such figures drew criticism from readers, who pointed out that in most sources, the muzzle velocity of the shells of this weapon is only 855 m / s.

To be honest, the figure of 875 m / s caused some doubts in me myself. But I accepted it for two reasons. First, G. Staff is a respected author specializing in the German navy of the First World War. Secondly, I would not like to artificially underestimate the power of the German guns.

However, in all likelihood, this approach of mine turned out to be wrong. And such data should be used for calculations - a range of 20 400 m at an elevation angle of 16 degrees at an initial speed of 405 kg of a projectile of 855 m / s. In this case, the shape factor of the projectile is practically equal to that calculated by me earlier and is exactly 0,7. Most likely, as one of the respected readers said, the initial speed of 875 m / s was really achieved somewhere in the tests, but "in everyday life" a smaller powder charge was used.

At the same time, in order to summarize in one article all the necessary data for further calculations, I present information about the ballistics of the guns used to calculate the above data and shells for their guns:

The "aerodynamic quality" turned out to be the expectedly best for the 380 mm / 50 cannon shells. As for the 305-mm ammunition, it is almost the same for the Russian and German shells, with a minimal superiority of the Russian (the difference is in thousandths). The outsiders were 283-mm shells, but their lag is relatively small.

Alas, lowering the initial speed of 405 kg of the German twelve-inch projectile from 875 m / s to 855 m / s played a cruel joke with him. If the previous calculation showed that in terms of armor penetration this artillery system was superior to the Russian at distances of less than 50 cables, now we see that in this parameter the German gun is inferior to our 304-mm / 52 cannon even by 45 cables.

In my opinion, the data obtained can be used to model a possible confrontation between Russian and German heavy ships during the First World War. But, before proceeding with it, I will read with great pleasure the constructive criticism of the materials presented above.

The word is yours, dear reader!