What Russia lost in Ukraine, what Ukraine lost in Russia 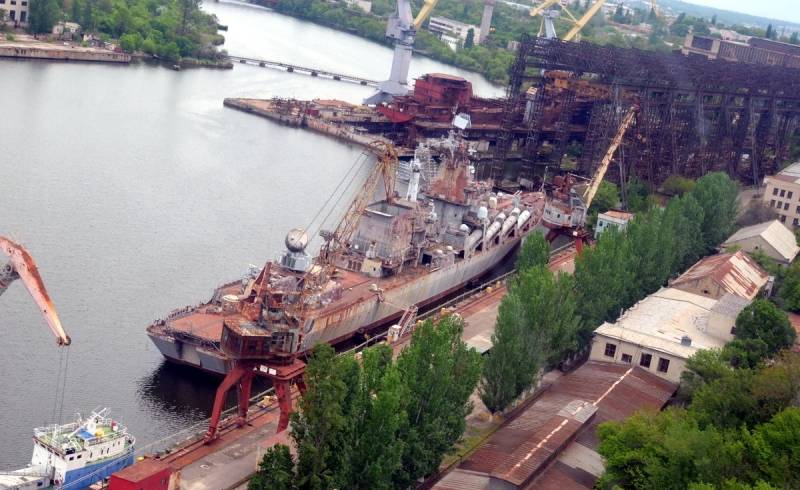 Russian-Ukrainian relations, or rather, their complete absence, is a headache for both countries in many sectors. Today we will talk about shipbuilding, which was very painful for both countries. After all, this industry is very knowledge-intensive and requires, in addition to heads, also hands (straight), and technologies, and investments.


And most importantly, shipbuilding is a very important component of the military-industrial complex of any country that has a coastline. After all, this coastline should be at least protected, as a maximum - protected.

So shipbuilding is as important a component of state security as tank building or aviation industry. In all other cases, the products of these industries have to be purchased from those who can sell. And there the options already begin.

Shipbuilding industry of Ukraine. This is a very controversial thing. Before the revolution, of course, there was something like that on the territory, and the ships were built under Prince Potemkin, who founded shipyards near the city of Nikolaev.

But the main formation of the shipbuilding industry in Ukraine took place during the Soviet era, when the construction of factories was launched in the Ukrainian SSR, as part of the unified state that was the USSR. Including shipbuilding.

And when the Soviet Union collapsed, Ukraine got just an excellent production base, which made it possible to build submarines, boats, large surface ships of different classes: rocket-artillery, landing, mine-sweeping.

And, most importantly, the production base was backed up by a scientific base that allows for R&D of a wide variety of plans.

How much did Ukraine get?

The latest large orders from Ukrainian shipyards during the Soviet era are impressive. They fall at the end of the last century. These are aircraft carrier cruisers of Project 1143 "Krechet", one of which is still in the Russian Navy, missile cruisers of Project 1164 "Atlant", patrol ships of Project 11351 "Nereus", small anti-submarine ships of projects 1124 "Albatross" and 11451 "Sokol".

It really was the peak of the Ukrainian shipbuilding industry. 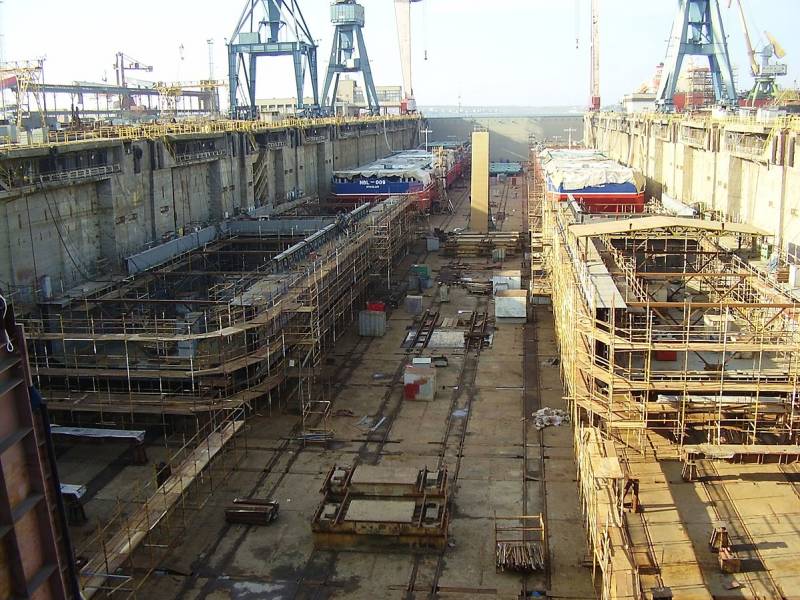 And then the era of independence began. And along with it came the unexpected: the accumulated Soviet ties collapsed and together with them a situation emerged when Ukrainian own capabilities in the construction of ships significantly outstripped the country's needs for ships.

There are fewer orders, fewer funding, fewer in total. And immediately the outflow of personnel began, because if the shipyard at the very least can exist due to the repair and docking of already operating ships, then, alas, the design bureaus. R&D is always new. No design work - no constructors needed. And the outflow of personnel begins. To other industries, to other countries.

By and large, this is termed industry degradation.

And since the degradation of the entire industry begins with an inevitable outflow of self-respecting qualified personnel, a wave of bankruptcies is quite expected. And where there is bankruptcy, there is a general symphony of destruction.

So in Nikolaev in 1992, the TAVKR "Ulyanovsk" was cut, in Kerch in 1995 one of the "Nereev". Now, according to the decision of the Cabinet of Ministers of Ukraine, the last of the Atlantes, the former cruiser Admiral Lobov, and now Ukraine, will be cut by 90%.

In Ukraine it was decided that "Ukraine" should be scrapped. 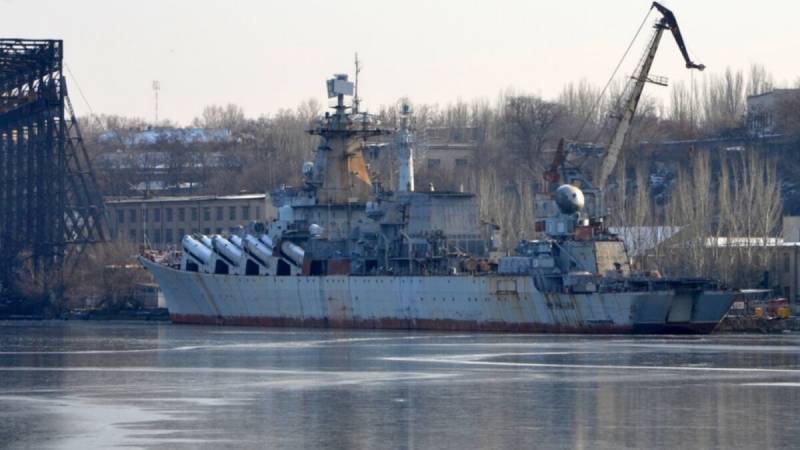 The degradation and destruction of the Ukrainian shipbuilding industry, perhaps, was completed by the crisis of 2013-2014 and the decision of the people of Crimea caused by the crisis to move to permanent residence in Russia.

As a result, Ukraine lost its shipyards Zaliv (Kerch) and More (Feodosia), enterprises of Sevastopol and Simferopol. As a result, there were no enterprises engaged in the production of auxiliary ships, repairs, and a number of research organizations.

Not fatal. This is not Nikolaev, although it is also unpleasant. Today, the Ukrainian side has lost a very important production of ship automation, components of naval equipment associated with polymer composite materials and fiberglass.

In addition, there are ship repair enterprises and an enterprise for the repair of marine diesel engines.

There is, in principle, not so little left. Thirteen businesses. Nine production, one - ship repair, three - research.

The enterprises remaining at the disposal of Ukraine are enough to cover all the country's needs in the creation and maintenance of naval equipment and, if not to talk about repairs, there remains a great potential for export. 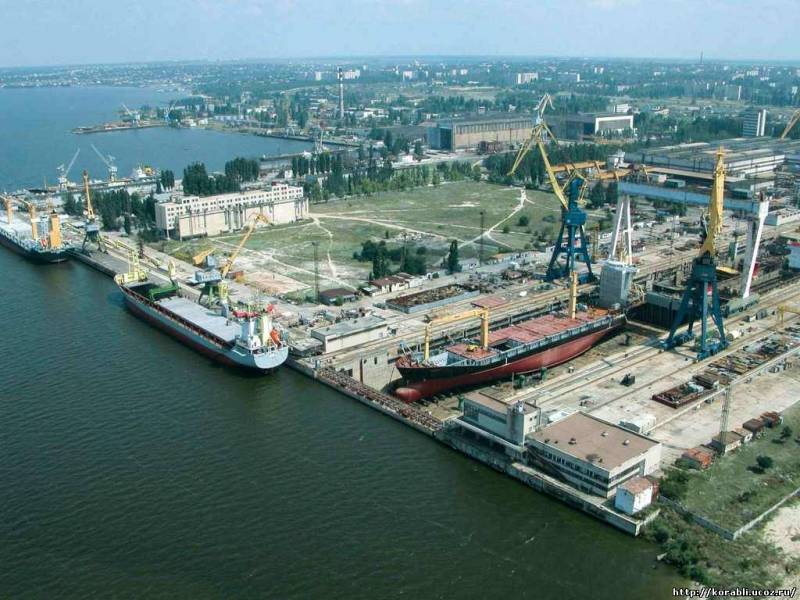 Assembly plants make up more than half of the total and are concentrated in the south of the country, in Nikolaev. These are the plants "Nikolaevskaya Verf" (former "Black Sea Shipbuilding Plant") and SE "Nikolaevsky Shipyard" (former "Shipyard named after 61 Communards").

Engines are produced in the same Nikolaev and Pervomaisk, machine components in Kherson and Krivoy Rog. Design and research organizations are based in Nikolaev, Kiev and Kherson. The repair company is located in Odessa. There is one diversified enterprise, the Kiev Kuznya na Rybalskiy plant, the former Leninskaya Kuznya plant, which produces radio electronics and armored elements.

In addition to the Ukrainian pearl of shipbuilding - Nikolaev, as you can see, there are many enterprises capable of satisfying any order for naval equipment.

However, the situation in shipbuilding in Ukraine is far from ideal, quite the opposite. What can the industry boast about?

Three Project 12322 Zubr landing ships for the Chinese and Greek navies.
Completion of the Project 1991 Albatross corvette, laid down in 1124.

Not much. BUT история with "Ukraine" in general is the best illustration of what is happening in the country's shipbuilding, despite the fact that it is controlled by politicians.

Missile cruiser "Admiral fleet Lobov "was founded in the summer of 1984 in Nikolaev. I met the independence of Ukraine in the degree of readiness 75% It was renamed to "Ukraine". And in 1994, the construction was stopped for lack of funding.

In 1998, construction was resumed and by 2000 the degree of completion reached 95%. Russia offered to buy the ship. The option was not bad, since the maintenance of such a large ship cost 3-4 million dollars a year. The manufacturer was unable to carry such an encumbrance.

In 2013, a preliminary agreement was concluded on the purchase of the ship by Russia for 1 billion rubles. But in 2014, in the wake of the coup in Ukraine, all agreements were canceled.

As a result, despite the assurances of President Zelensky, the Cabinet of Ministers of Ukraine decided to demilitarize the ship, dismantle weapons, navigation equipment and subsequent sale. Perhaps for scrap.

Things were no better with the projects for the construction and completion of ships of smaller classes.

Corvettes project 58250. The program in 2005 provided for the construction of four ships with the delivery of the lead in 2012. The project was estimated at 16 billion hryvnia ($ 2 billion) in 2011 prices. However, the financing was carried out so well that it was not possible to build even the lead ship Vladimir the Great, laid down in 2011. Today the ship is 43% ready.

The rest of the ships were not even laid down, there is information that work on the ships of the project will resume after 2022.

Apart from corvettes, the construction of Project 09104 Kalkan-P patrol boats, Lan and Vespa high-speed combat boats was not implemented.

The construction of the eighth boat "Gyurza-M" and the third boat "Centavr-LK" was suspended due to the coronavirus epidemic.

And despite the presence of such a production base, the Ukrainian government is trying to buy ships abroad. Naturally, on credit. In November 2020, the Cabinet of Ministers approved the purchase of 20 French-made OCEA FPB 98 MKI boats for $ 150 million, 85% of which are borrowed funds.

Five out of twenty boats will be built in Nikolaev, fifteen in France. Not a very fair division, but since the money is given by European banks, they determine who and where will build equipment.

In the same 2020, in October, the Ministers of Defense of Ukraine and Great Britain signed a memorandum on the construction of eight large missile boats for the Ukrainian Navy. The project is British, money for it in the amount of $ 1,5 billion is allocated by British banks and credit agencies. For a period of 10 years. The first two boats will be built in Great Britain, four at Ukrainian enterprises.

It is sad. One side. The vast experience accumulated by Ukrainian enterprises and research institutes, especially the experience of building large ships during the Soviet period, production and scientific potential - everything turned out to be simply squandered during the years of independence.

The huge production capacities of the unique shipbuilding conglomeration in Nikolaev turned out to be absolutely not in demand. For three decades of independence, it has not been possible to implement a single major program either for the Ukrainian Navy or for foreign fleets.

The main problem is the lack of money from the state. Hence the attempts to obtain ships for the fleet by obtaining loans from foreign factories. To the detriment of their industry.

The result is absolutely deplorable: Ukrainian shipbuilding is not able to build ships of a class higher than a corvette. But even building a boat is problematic. Mostly financial in nature.

However, the construction of boats in France and Great Britain with borrowed money will not help Nikolaev and Kherson in any way.

Meanwhile, Russia could become the only potential buyer and customer for Ukrainian enterprises. Yes, we need the enterprises of Nikolaev, where it is possible to build large ships, we need the remnants of shipbuilding personnel.
The most interesting thing is that at one time Russia was ready to pay for all this. Even for a cruiser built with our money.

But the political madness that has seized Ukraine will not even allow the last of the Atlantes to be sold to Russia. Here, by the way, it would be worthwhile to attract intermediaries from among our friendly countries and acquire the former "Ukraine". A cruiser would really come in handy.

This material is the best, from my point of view, shows how sad it turns out when politicians (mediocre) begin to dictate their terms to everyone. After all, if not for the remarkable national "policy" of Ukraine in 2014, then neither Crimea nor Donbass would have happened. And Russian rubles would have flowed to the cash desks of the factories of Kerch, Nikolaev, Krivoy Rog and Kiev.

Ukraine has forgotten only money in Russia. Very big, however, money. Russia could get at its disposal the production capacities of Nikolaev, which we are sorely lacking today. But it is doubtful that the situation will be reversed. Politics...