The incident in Kazan and government patriotism 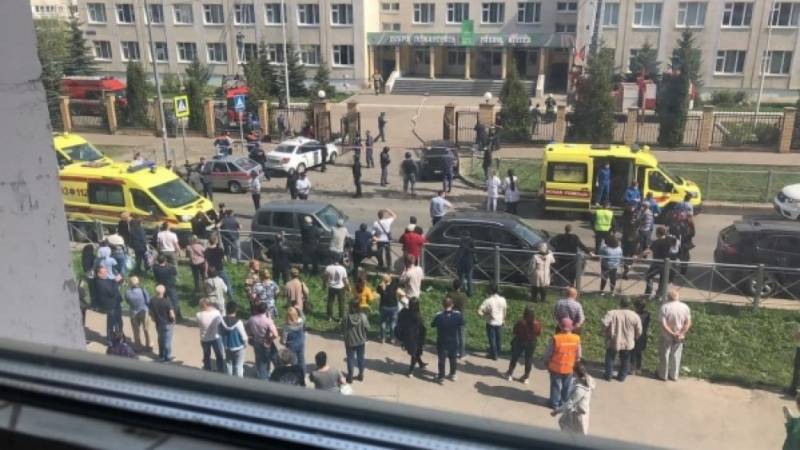 The events in Kazan on May 11, 2021, which affected the entire country, of course, must not be forgotten, conclusions must be drawn. Do not tighten up the turnover weapons, not to turn the country into a zone of "prison romanticism" with ubiquitous cameras, bars, fences and guards. And to engage in the upbringing of the younger generation, genuine upbringing, and not "official", as it is now.

It's about the state of society itself

Major General of the FSB, retired Alexander Mikhailov saidthat the tightening of arms turnover is completely ineffective. He quite rightly noted that firearms are not always used in such terrorist, extremist and psychopathological attacks. For example, when jihadists, religious radicals staged their acts in European countries, they often used knives, axes or vehicles, directing it to crowds of people. It is impossible to prohibit ordinary household items, tools, materials (you can kill with a brick).

The main problem, according to Mikhailov, is the "state of society itself," which lives in an "absolutely electrified atmosphere." In particular, in 2020, amid "covid psychosis" and all kinds of prohibitions, doctors and sociologists around the world noted an increase in mental illness and social tension. People are in the grip of prohibitions, falling incomes, constant stress, intimidation by the threat of death, a virus, "go crazy". In response, society received a wave of suicides, a pandemic of aggression and psychosis around the world.

“All the proposals that are being voiced today are purely cosmetic in nature, which, by and large, has nothing to do with the security system. Because the previous terrorist acts have exhausted the measures that could be taken in the state to ensure the safety of not only schoolchildren and kindergartens, but also objects of mass gathering of people. "
Indeed, remember the atmosphere of Soviet society and the then level of security of an ordinary citizen and a child. Open areas of kindergartens and schools, where families with small children and teenagers could walk. Schools where children, parents and teachers shared tea. Who are now banned and are immediately surprised - why there is no mutual understanding, friendship between children in the classes? Hiking to lakes and rivers, trips to theaters and circuses, when there was no need to fill out a million pieces of paper. General bureaucratization has strangled the normal interaction of kindergartens, schools, children and parents in the bud. Solid bureaucracy, which must be confirmed with a piece of paper from the relevant authorities.

Gardens and schools were closed with ugly fences, like railway stations, cameras were stuck. Now they want to plant guards with weapons in every school. Tens of thousands of schools and kindergartens. Tens of billions of rubles will have to be spent on this. Thousands of healthy men will be sitting on a good salary, in isolation from the real economy. The money was obviously taken out of the pockets of the parents, under a plausible pretext. They will take additional measures to prohibit the circulation of weapons, create new difficulties for law-abiding, respectable people. At the same time, bandits and sociopaths do not experience problems with how to find weapons.

The whole country was turned into a zone of "prison romanticism". Bars, fences, cameras and security. And what has become safer? Not! Under Stalin, it was possible to go to the utility store and simply, without inquiries and control, buy smooth-bore weapons and cartridges. No problem. This is how the Stalinist government "feared" the people. Under the tsars, it was possible to buy rifled weapons in the gun store. Nobody was afraid that the "drunken Russians" would shoot each other or go to organize an uprising. At the same time, the level of security in the USSR or in Tsarist Russia was much higher than in modern Russia. There were no huge hordes of officials controlling every step and sneeze.

Modern Switzerland or Israel are examples of a people armed to the teeth. The crime rate is very low. Ideally, a weapon permit could be issued after serving in the army, or after graduating from a university with a military department. Thus, to strengthen discipline and responsibility in society. Why are Russians worse than Americans or Swiss? The authorities, apparently, following the example of the West, consider us "Russian barbarians", from whom it would be nice to take away their axes and knives?

Thus, tightening arms turnover is not an option. As is the security in all schools. This is an imitation of violent activity, "screwing nuts". The question is in the culture and morality of society, in the attitude of the authorities to the people.

Morality at the bottom

You really need to educate the younger generation. Eliminate social injustice. Stop looking to the West, bet on the Russian language, culture and history... To educate the entire population. And the bureaucratic corps should be an example. What example is being shown now? Theft, the bet on the "golden calf", where the "chosen ones", to whom the law is not written, are the rich. Who are the idols, the idols of the crowd? All sorts of artists, pop stars, models, social media idols. Moreover, if you study their biography, then these are usually alcoholics, drug addicts, who took all kinds of drugs, harlots and perverts, sociopaths. People on whom there is nowhere to put brands.

Now in liberal, "elite" circles it is customary to condemn Soviet reality, the Soviet Union. To say that nothing but galoshes was produced there. However, everyone born in the USSR knew and remembered real, genuine heroes - the Great Patriotic War, labor, cosmonauts, pilots, outstanding scientists, travelers, prominent statesmen. What now? The "heroes" of the society were figures of decadent art, pop music - a substitute for genuine culture. In social networks, the most popular personalities are those who compete in degradation, debauchery. Who knows the heroes of the war in Syria? Modern leaders in production, astronauts, pilots, scientists, doctors and teachers? It seems that there is no education, no science, no space, no production, no armed forces in the country. Only livestock nets. All thoughts of getting your daily bread and entertainment. There is nothing else! We live by inertia, on the remains of a base created in Soviet civilization. On the outskirts of the "civilized world".

What are young people proud of? What examples is she being brought up on? Where does the wave of violence and suicide among young people come from? Where do the senseless and bloody massacres against children and children against children come from? Millions of law enforcement officers and security officials are engaged only in eliminating the consequences of emergency situations that have already occurred, imitation of activities, "tightening the screws." The morality of society collapsed to the bottom. The “godless” Soviet society was much cleaner and healthier. Instead of robotics and chess clubs, there are now "registrations" and striptease.

Youth policy has failed. Official, formal patriotism cannot replace genuine. Especially when social elevators don't work. Every year we have more and more billionaires and multimillionaires, they are getting richer, and 80% of the people are getting poorer. Law of energy conservation. If it decreases somewhere, then in another place it will definitely arrive. Therefore, it should come as no surprise that the majority of young people adhere to an opposition attitude. And he votes "with his feet", preferring to go abroad, or plans to leave as soon as possible.

State patriotic organizations keep only on minimal funding, they are loose and weak. There is no real ideology. People will not fight for money (when there is an opportunity to run into an answer). At the same time, even in these organizations there is no real patriotic, technical and physical training, which was available in the Soviet Union. Parachute jumps, glider flights and shooting clubs are too expensive for ordinary teenagers under the rule of capitalism.
The only remaining goal in modern Russia is to get a good job, for a lot of money! And that's it, there is nothing else! All the rest is verbiage. Capitalism, a consumer society ("golden calf"), constant search and pursuit of pleasures (hedonism) destroy our society, primarily youth, children, our future. From this vicious system, officials grow, despising the people and creeping before those who are of higher rank. The most terrible Russophobes, cosmopolitans and Westernizers are not in the countries of Western Europe, the USA, the Baltic states or in the Ukraine, they are “our” officials who despise and hate the people, Russia. Which take their families, children and capital abroad, and in Russia "work".

How can you talk about the patriotic education of children, youth and the people in general, when representatives of the "elite" of Russia, officials, judges, deputies, senators and their relatives prefer to rest and live in the West? There they set up "alternate airfields." The people receive a beggarly existence and formal patriotism.

We are taught patriotism by people who have palaces in Russia and abroad, multi-million dollar incomes, children and grandchildren who study in the best universities and schools in Europe and the United States. At the same time, our Motherland is rapidly dying out, and the authorities either do not notice this process, or bring in migrants and give penniless handouts to families who cannot fundamentally solve the situation.

Solid imitation instead of real deeds.

Ctrl Enter
Noticed oshЫbku Highlight text and press. Ctrl + Enter
We are
About Stalin and KhrushchevWhat you didn't want to know about England
Military Reviewin Yandex News
Military Reviewin Google News
147 comments
Information
Dear reader, to leave comments on the publication, you must sign in.