Black deed: the tragedy in Kazan as a reason for the return of the death penalty 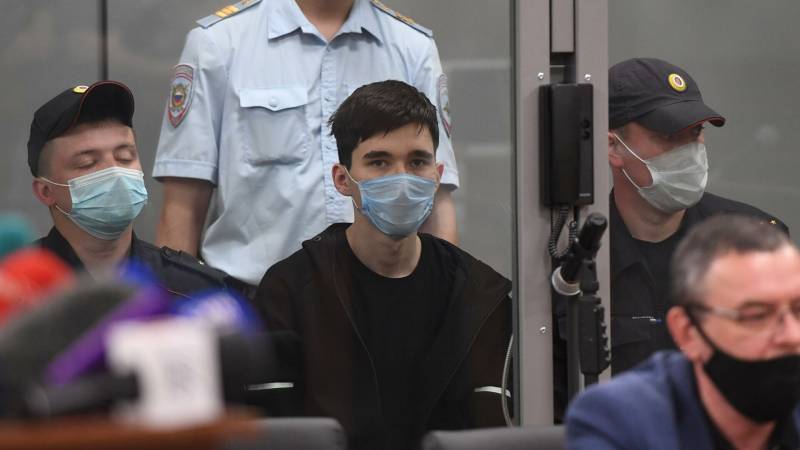 After the first shock from News indignation came from Kazan. From how easily and naturally 19-year-old Ilnaz Galyaviev did his dirty work. In the first days after the massacre, a mass of facts surfaced, raising uncomfortable questions. To power, to others, to yourself. 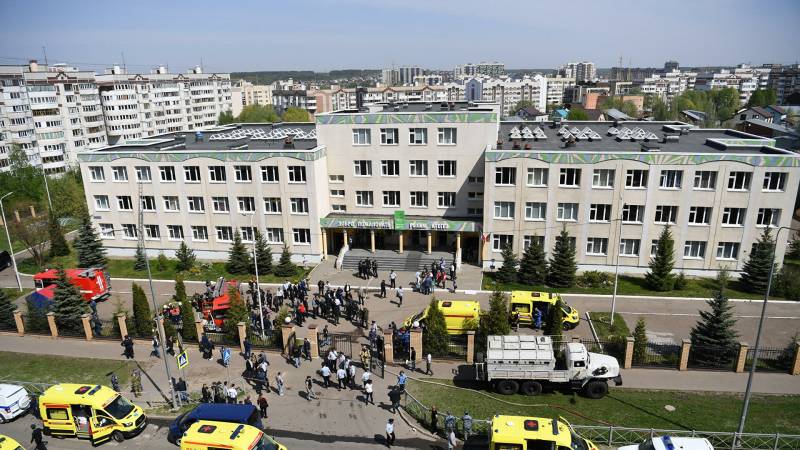 Source: ria.ru
On May 12, the Investigative Committee of Tatarstan announced that Galyaviev had been diagnosed with a serious brain disease. Some Telegram channels (unfortunately, they are now the most efficient news providers) even called this disease - encephalopathy. However, this does not mean anything concrete - under the encephalopathy can hide organic brain lesions of different nature and scale. The Kazan killer, according to the Investigative Committee, went to doctors several times with complaints of headaches. He was not registered with a psychiatrist and narcologist, and the military commissariat approved him as a conscript. As we know, Galyaviev legally received permission to purchase weapons literally a couple of weeks before the massacre of children and teachers. Was it due to a tragic confluence of factors, or is there any negligence in the controlling structures? 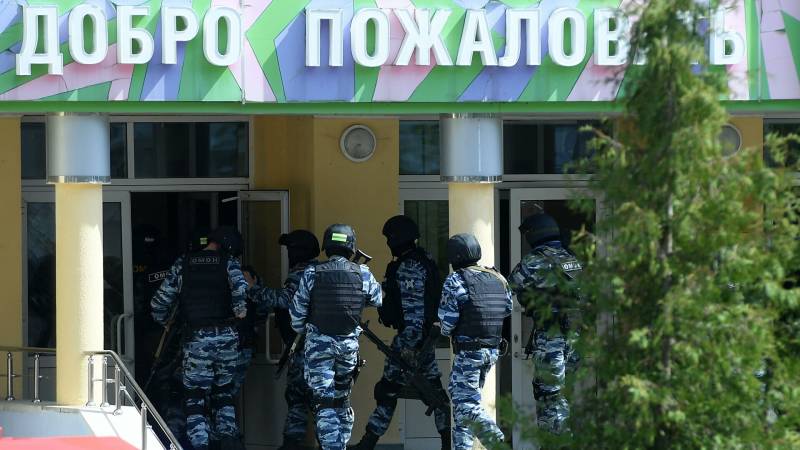 Source: ria.ru
Even more paradoxical are the recordings of surveillance cameras on the streets adjacent to the gymnasium. If the footage is indeed Galyaviev, then he was not afraid of anything on the way to school and did not hide his intentions. Of course, he is clearly a psychopath, but what were the passersby thinking as the man in black walked past with a bag and a hunting rifle? Or the drivers of passing cars, who did not bother to spend five minutes, stop and dial the alarming 112. Apparently, they thought that a cosplay festival was organized near the school.

Worst of all, the psychopath didn't bother too much with the planning of the mass murder. He just took weapons, cartridges, equipped himself and went to school, where he spent more than one year. Galyaviev walked the usual route, knew all the nooks and crannies in the building and most of the employees. The realization of the routine of murder makes you especially uncomfortable.
The investigation has yet to find out all the circumstances of the Kazan tragedy, but the failure with the security system in the educational institution is already clear. In the footage taken by eyewitnesses, you can see the details of the entrance lobby in the school yard. There is no hint of the presence of electromagnetic locks and a video camera on the openwork door. Usually it is issued by an internal opening button located at a distance from the fence. To prevent an unwanted element from reaching and opening the entrance from the outside. The elementary security logic dictates that no outsider should enter the school grounds without the knowledge of the guard or watchman. You don't have to go far for examples. In the Tyumen region, where I live and work, the vast majority of schools are equipped with such access control systems. Moreover, many educational institutions are equipped with video cameras that make it possible to unambiguously identify a person with a hunting rifle at the gate. In schools with more than 1 students, booths with security guards were additionally installed at each entrance. Initial jokes about turning schools into impregnable forts died down after May 11.

Skeptics will probably argue that even such measures will not save the school from attack. Of course, an organized terrorist gang will not be stopped even by ten guards with truncheons, cameras and locks, but a lone psychopath like Galyaviev will be forced to look for a new target for an attack. And this is a waste of time and a high probability of being captured by the security forces. Someone will remember the "oil" Tyumen region. They say that chickens do not peck money, so they allow themselves such security measures. But Tatarstan is far from being a subsidized region and the situation itself, when a murderer in the capital of the region freely enters school with a gun at the ready, it cannot be anything other than a shame. In addition, it looks very dull история with payment for the services of private security companies. Allegedly, the school did not have the funds to renew the contract. Not found or did not want to? And, finally, why are issues not related to the educational process solved at the expense of the school (or, worse, parental money) budget? Kazan Municipality is not able to take it upon itself? According to the children's ombudsman Anna Kuznetsova, every tenth school in Tatarstan is not guarded.

We can only hope that elementary security systems will appear in the gymnasium No. 175 in Kazan. Only now they will be paid for with the blood of students and teachers.

In the Kazan tragedy, a certain interest is aroused by the reaction of the authorities and legislators. As usual, everything revolves around the karmic “forbid” and “toughen up”. Tighten the procedure for the sale and registration of weapons. As it became known, Galyaviev received a weapon permit two weeks before the execution of the children. That is, he first planned the attack, and then acquired a gun. Some lawmakers believe that it is time to tighten the screws on the Internet. It is not clear just what tools the state has in this area - most of the servers are located abroad. In fact, the problem of access can be solved only by cutting off the Internet altogether. Otherwise, unfortunately, there is no way. An example of Telegram once "forbidden" is an excellent illustration of this. The already outdated slogans about the corruption of the younger generation with bloody computer games were heard. It turned out corny. However, as an option to get your portion of fame on the wave of tragedy, it is quite applicable. In general, much of the response to school killings is like trying to solve the problem with as little financial cost as possible. 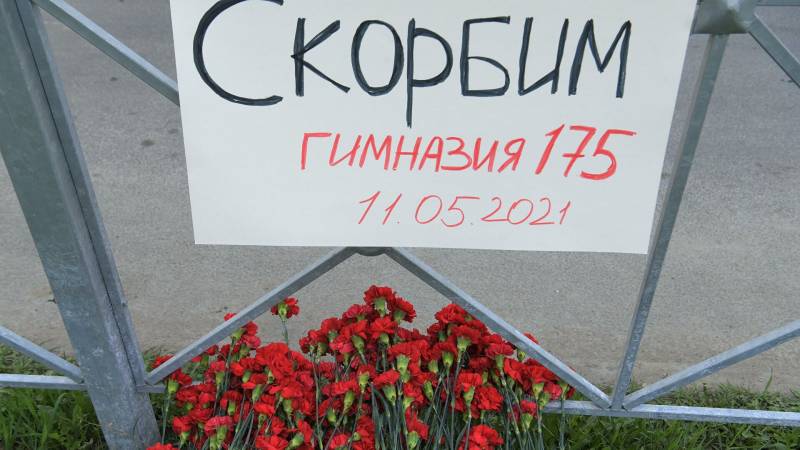 Source: sputniknews-uz.com
The opposite effect of various prohibitive measures should not be disregarded. For example, initiatives to make it more difficult to access small arms. Firstly, it stimulates the underground arms market, which can turn into even greater tragedies. Secondly, domestic manufacturers of civilian weapons will inevitably suffer. Ultimately, Russia's innocent hunting community and associated markets and infrastructure will suffer.

Some commentators, without really coming up with anything, threw in the abstract:
"The correct school guard does not depend on the watchman, not on the soldier, but on the head."
Nobody is ready to tell what exactly is required from the head. Some, however, dare to give quite tangible advice. For example, psychologist and business consultant Maria Zaburmakh. In her opinion, the work on the prevention of such tragedies should begin with the cultivation of a culture of conflict that inevitably arise in life. Maria obviously has a very rough idea of ​​school life and how many children go through psychologists and class teachers. Besides, what kind of culture of raising the conflict can we talk about if a psychopathic killer realized a couple of months ago that he was a god. And besides, with organic brain damage.

But there were also quite common ideas among the initiatives. On the introduction of an age limit for the possession of weapons and obtaining a permit only after serving in the army. State Duma Deputy Alexander Khinshtein sees a way out, first of all, in increasing the level of safety in schools. If necessary, educational institutions should be turned into fortresses, and entrance and exit should be organized only according to individual cards. But this requires a lot of money and political will.
The massacre at school, by the way, is far from the first in Russia, again raised the question of the justice of the death penalty. Since 1996 in our country, as you know, there has been a moratorium on the legalized killing of scum who have committed the most serious crimes. Then this decision was dictated more by political motives than ephemeral humanity.

The country sought to get closer to the "enlightened" West and expected approval in return for a moratorium. It is not worth talking about the fate of our relations with European humanists. Maybe we should already return to the highest measure? Moreover, the Kazan tragedy simply obliges us to do this. If necessary, let us recall all the pros - the need for lifelong support for the scum, the feelings of the victims' relatives and the absence of a “last frontier” for hardened repeat offenders. One can forget that forensic examination may fail in the event of a Kazan execution - the identity of Ilnaz Galyaviev has been unambiguously established, there are a lot of witnesses and video materials. After all, the article could be limited to aggravated murder of minors. If an appropriate plebiscite is held in Russia tomorrow, the overwhelming majority of the population will vote for the return of capital punishment. At least in the appendix to Galyaviev's crime.

The main heroes of the Kazan tragedy, however sad it may sound, were the teachers. Not law enforcement agencies, not security guards, but teachers and school administration. After the explosion in the foyer, they promptly notified by intercom and messenger that there was a terrorist at the school. Most of the teachers managed to close the doors and hide the children. And 26-year-old English teacher Elvira Ignatieva covered the students at the cost of her life ...

Ctrl Enter
Noticed oshЫbku Highlight text and press. Ctrl + Enter
We are
What you didn't want to know about EnglandTatarstan authorities will restore order in the republic - Sharia
Military Reviewin Yandex News
Military Reviewin Google News
206 comments
Information
Dear reader, to leave comments on the publication, you must sign in.