Afghanistan: where to go for the American military 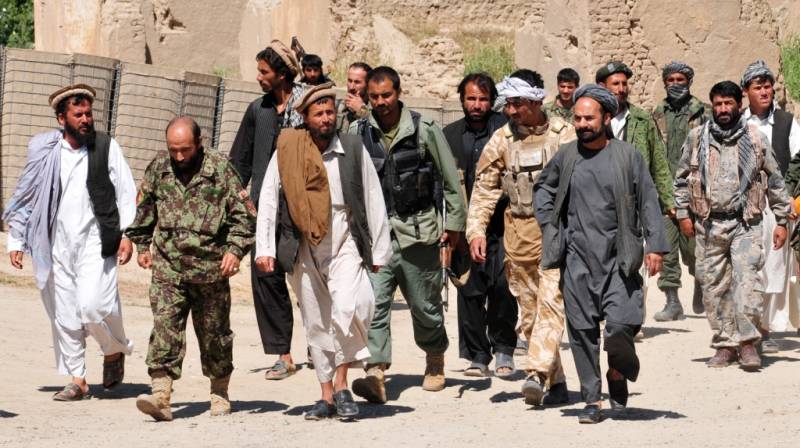 I have written many times that it is not in the tradition of the United States to fight on its own. Well, the Americans cannot win alone. Even with all the power and equipment of their army, the American units either get stuck in battles and go into deep defense, or simply stupidly destroy everything and everyone with the help of aviation and artillery. But even in this case, one can speak of victory only as a temporary state of military confrontation.

We remember how pompously the Americans announced an agreement with the Taliban (banned in the Russian Federation) on the cessation of hostilities and on the subsequent withdrawal of American troops from Afghanistan.

For ordinary people, a wonderful legend was invented about the peacefulness of the American army and the unwillingness of the United States to shed the blood of Afghans. In fact, the long-term war led to the fact that the US army was simply locked at its bases and practically did not conduct military operations.

Declare defeat a victory, and then we'll see

The decision to withdraw American units was taken out of necessity. The army has ceased to fulfill the role that was planned at the Pentagon. In fact, American soldiers were trapped. This is how the world perceived these agreements. New version of the movie "Saving Private Ryan".

Someone spoke directly about the forced evacuation of units. Someone played along with American politicians and declared that the United States is striving for peace in Afghanistan. But everyone had an understanding of the situation.

Let me remind you that the withdrawal of troops was to be completed on May 1 this year. Together with the Americans, all their NATO allies were to leave Afghanistan. But the deadline has passed, and the units have not been withdrawn.

Now the Pentagon has announced the next date for the withdrawal of the last American soldier from Afghanistan - September 11, 2021. On the 20th anniversary of the tragic events of 2001, when a terrorist strike was inflicted on the United States.

The Americans are negotiating with the Taliban through all channels (banned in the Russian Federation), persuading the leaders of the Mujahideen not to start hostilities, which look quite logical after the Americans violated the agreements. Wasn't it easier to just do what we agreed on? But Washington is at risk. Risking the lives of American soldiers and officers.

The fact is that Afghanistan was supposed to become a certain base for the United States from which it could influence the situation in Tajikistan, Uzbekistan, Turkmenistan, Pakistan, and Iran. And in the entire Central Asian region as a whole.

Simply put, it would be possible to maintain tension on the southern borders of Russia and China using the wrong hands. By feeding certain forces in neighboring states, the Americans would have retained leverage over the situation in these countries, right up to the organization of coups d'état.

So, wherever you throw it, there is a wedge everywhere. The military contingent must be withdrawn, otherwise the Taliban will start such a massacre that the United States will howl. And carpet bombing and all sorts of technical innovations will not help here. Yes, the losses among the Afghans will increase, but the American army will not even dare to stick its nose out of the fortified areas.

And without military bases in this country, the United States is losing a foothold from which it is convenient to "throw fireballs" to the opposition forces of Russia in neighboring states. And thus keep Moscow in suspense.

The situation is clear not only to the Russian or Chinese military. Articles in the American press are indicative in this vein. Here is one quote from the material published in The Wall Street Journal. Moreover, journalists refer to sources in the American military department.

Typically, such articles are in the nature of an "accidental leak" from the headquarters of the American army. But more often it is the fruit of the analysis of the situation by American military experts. In this case, in my opinion, The Wall Street Journal published quite competent reasoning on an important topic for the Pentagon.

"The options under consideration, according to US government and military officials, range from nearby countries to the more distant Gulf States and US Navy ships at sea ... Uzbekistan and Tajikistan, which border Afghanistan, are preferred for quick access."
It's hard enough to say more specifically. We need bases in those states from which it would be possible to strike quickly on the territory of Afghanistan without endangering our own military. Arrived, bombed and flew away. Great version of the American-style war. And rolling the troops from place to place is an expensive pleasure.

“The concentration of the US Armed Forces formations near the Afghan borders will allow the Pentagon to provide operational military support to Kabul, strike at the Taliban (banned in the Russian Federation. - Author's note) and respond to possible attacks by militants on the American embassy. The Central Asian countries are viewed by the US authorities as the most convenient footholds for such tasks. "
Now someone is thinking about the stupidity of such plans. Which Uzbekistan, which Tajikistan? Who is waiting for the Americans there? Alas, we tend to forget historical events. Even those that happened in our memory. I will quote again. But now from our RT. From the material of Alexey Zakvasin and Elizaveta Komarova:

“Recall that after the start of Operation Enduring Freedom in Afghanistan in September 2001, the American army used some military infrastructure in Central Asia.
So, from 2001 to 2005, the United States operated the Uzbek airbase Karshi-Khanabad, from 2001 to 2002 - the Tajik airfield Aini, and from 2001 to 2014 - the Manas airport located in Kyrgyzstan. "
So the Americans remain true to tradition in their actions. They will not invent something new against the barbarians (oh, as this expression of one of Hitler's generals reminds me). Central Asia and the former Soviet republics. The rest of the states, to one degree or another, have already suffered from friendship with the United States or are practically subject to Washington.

Will it be possible to deceive the governments of the republics again?

Probably, some of our readers were surprised by the presence of the President of Tajikistan Emomali Rahmon at the Victory Parade. Indeed, the Tajik president is a rather rare guest at such celebrations. First of all, because in Tajikistan itself, Victory Day is as great a holiday as in Russia. But this year Emomali Rahmon was in Moscow. This is the lot of presidents. Work comes first.

I think that after all the festive events, the Russian and Tajik presidents talked one-on-one, including about the proposals of the Americans. There is no information in open sources about any proposal of the Americans in Dushanbe. But according to some indirect signs, we can already talk about the search by American diplomats for an approach to President Rahmon.

Why did the Tajik president come to Moscow after all? The point is that, unlike Tashkent, Tajikistan is a member of the CSTO. According to the agreement, all members of this organization are obliged to coordinate this with all members of the CSTO when deciding on the deployment of any foreign military organizations and bases. Emamoli Rahmon wants a clear answer to the question of the American presence. There are options. Or Russia will be categorically against it.

Uzbekistan is also absolutely not ready to exchange good relations with Russia for dubious “American pies”. The strategic partnership policy suits everyone quite well. On the one hand, Tashkent is pursuing an independent policy, and on the other, Russia is helping the country to implement a fairly large number of projects.

In addition, the 201st base of the Russian army plays a rather significant role in "shaping the international climate" in this region. This base not only controls the most important routes from Afghanistan to the north, but it also reconciles the most militant local activists and fighters for something there. I recall the words of the Minister of Defense of Russia Sergei Shoigu, said by him during a recent visit to Tajikistan:

“Taking this into account, we provide support to the Tajik side. We pay special attention to bilateral cooperation in the field of defense, as well as the functioning of the 201st Russian military base. "
It seems to me that this time it will be very difficult to find a place for a new base. First of all, because Russia will no longer turn a blind eye to separate negotiations between the Americans and their allies and partners. There is a direct danger that Moscow will take harsh measures and shake hands. And given the balance of power that exists in the world today, the Americans do not need it at all.

There is one more factor that few people remember today. The time when Russia has weakened its attention to the Central Asian regions is characterized not only by the formation of nation-states, but also by bloody events in both Tajikistan and Uzbekistan. Here is what the orientalist Andrei Areshev told RT correspondents about this:

“The experience of the 2000s has clearly shown that the American military presence leads to a degradation of the situation both in the host country and in the region as a whole. For Uzbekistan, for example, this turned into bloody events in Andijan in 2005, which Islam Karimov perceived as an anti-government rebellion. "

Summary of the situation

Nobody disputes the importance of Central Asia for Russia. The region is located in the center of Asia, which means that whoever controls this region has the ability to influence all countries to one degree or another. Therefore, all means will be used to establish this control.

Will Russia be able to neutralize US plans? I would like to confidently say yes. But the East is a delicate matter, as the movie hero, beloved by many generations of Russians, said. Of course, there are many factors that speak for a positive response. Only, as it sometimes happens in the East, at the last moment it can happen that all forecasts go to hell.

I just want to hope that the leaders of the Central Asian countries remember the recent history of their own states. They remember the blood and tears that were shed there recently.

Ctrl Enter
Noticed oshЫbku Highlight text and press. Ctrl + Enter
We are
Situational analysis of the death of the MH17 flight (Malaysian Boeing 777), made on the basis of engineering analysis from 15.08.2014Results of the week. “In our cooperative, the board is always agreed”
Military Reviewin Yandex News
Military Reviewin Google News
28 comments
Information
Dear reader, to leave comments on the publication, you must sign in.