Mystery of the disaster of the motor ship "Armenia" 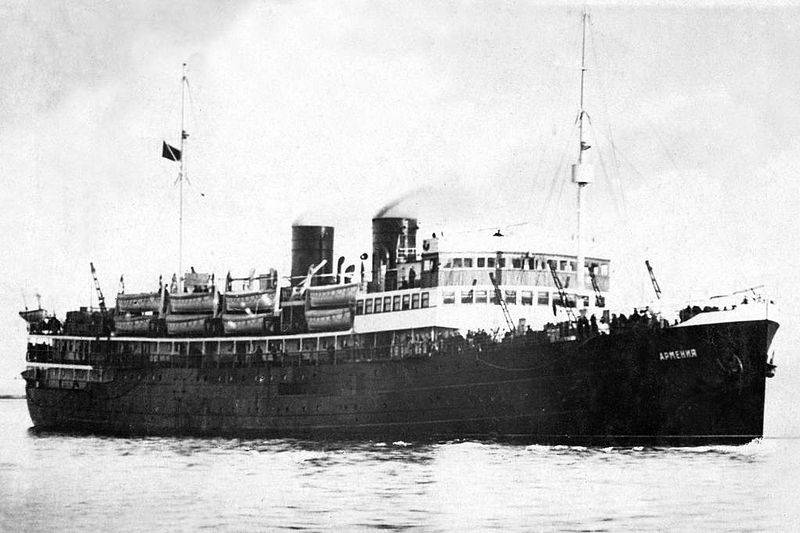 In the mid-1920s, shipbuilding, including civil shipbuilding, was actively restored in Soviet Russia. The design bureau of the Baltic Shipyard has developed a project for a motor ship of the "Adjara" type. In 1927-1928, six passenger ships were built, which were named after the Soviet republics: "Adjara", "Abkhazia", ​​"Armenia", "Ukraine", "Crimea" and "Georgia". Almost all the liners were built in Leningrad at the Baltic Shipyard (only the last two ships are in the German Kiel). The motor ships served on the Black Sea and served the lines between the ports of Ukraine, Crimea and the Caucasus. For their speed they were called "trotters".

"Armenia" was commissioned in 1928. It was a two-pipe motor ship with a displacement of 5770 tons, more than 107 meters long, 15,5 meters wide, capable of a speed of 14,5 knots. The crew is about 100 people, about 1000 passengers could be accommodated on board. Also, the ship could carry 1000 tons of cargo, that is, it was a universal cargo and passenger. "Armenia" was operated by the Black Sea Shipping Company and went on the line Odessa - Batumi - Odessa. 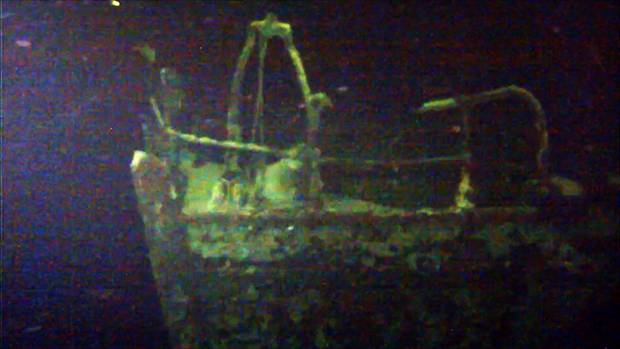 The bow of the "Armenia". Frame: video of the Center for Underwater Research of the Russian Geographical Society

With the beginning of the Great Patriotic War, the situation on the Black Sea required a change in the position of the "trotters". “Armenia” was transformed into an ambulance ship: the restaurants were transformed into operating rooms and dressing rooms, the smoking room into a pharmacy, and additional hanging bunks were installed in the cabins. In early August, the work on the ship was completed, and "Armenia" became part of the Black Sea fleet... Vladimir Plaushevsky became the ship's captain, Nikolay Zayunenko became the senior assistant, and Pyotr Dmitrievsky, the chief physician of the Odessa railway hospital, became the head of the medical personnel. The crew of the sanitary ship consisted of 96 people, as well as 9 doctors, 29 nurses and 75 orderlies.

During the defense of Odessa, the ship made 15 voyages and took over 16 thousand people from the city to the Caucasian coast. Day and night, medical personnel worked on board. Operations, dressings and blood. Many wounded. They took not only the wounded, but also refugees who were fleeing the war. The crew members accommodated people in their cabins.

Large crosses, clearly visible from the air, were painted on the sides and deck of the "Armenia" with bright red paint. On the mainmast was a white flag with the image of the International Red Cross. However, the Germans in the east practically did not comply with the articles of the Geneva and Hague Conventions. So, in July 1941, the Nazis damaged the sanitary ships "Kotovsky" and "Chekhov". Attacked by Luftwaffe aircraft, the Adjara liner, engulfed in fire, ran aground in full view of the whole of Odessa. In August the same fate befell the ship "Kuban". Therefore, 4 45-mm semi-automatic universal 21K cannons and 4 machine guns were installed on the "Armenia". Also, the ship was usually accompanied by a convoy.

In the fall of 1941, confusion reigned in the Crimea. The defeated units of the Primorsky army of the Red Army went to Sevastopol, followed by the Nazis. Then no one knew that the city would hold on heroically for 250 days. Everything that was necessary and not necessary was hastily evacuated from Sevastopol. For example, hospitals in the city itself and equipped in adits were packed with wounded, but someone ordered the evacuation of the medical staff. They even wanted to take out the well-prepared and fortified command post of the fleet. Only the energetic actions of the newly arrived deputy for ground defense, Major General Petrov, put an end to the mess. Sevastopol turned into a real fortress, stubborn battles began on its outskirts.

"Armenia" on November 4, 1941 left Tuapse and arrived in Sevastopol. The liner stood in the inner roadstead and took on board the wounded and refugees. The situation was unsettling. At any moment, a German aviation... Most of the warships of the fleet, on the orders of Admiral Oktyabrsky, went to sea, including the cruiser Molotov, which had the only shipborne radar station in the fleet. In addition to “Armenia”, the transport “Bialystok” was loaded in the Quarantine Bay, and “Crimea” was loaded at the berth of the Marine Plant. The loading went on continuously day and night.

The wounded, medical and economic personnel of the Sevastopol Naval Hospital (the largest in the fleet), headed by its chief physician, 1st rank military doctor Semyon Kagan, were loaded onto the ship. Also on the ship were placed the 2nd naval and Nikolaev base hospitals, sanitary warehouse No. 280, sanitary and epidemiological laboratory, 5th medical and sanitary detachment, a hospital from the Yalta sanatorium. Part of the medical staff of the Primorsk and 51st armies, as well as civilians of Sevastopol, were accepted on the ship. According to various estimates, the ship eventually collected from 5 to 7-10 thousand people.

First, Captain Plausheusky received an order to go to sea on November 6 at 19 o'clock and go to Tuapse. A small sea hunter "041" of Senior Lieutenant Kulashov was assigned for escort. In the absence of a strong convoy, only night was a good defense for a large ship. By day, a large cargo-passenger liner, almost without air defense systems, escort ships and aircraft, was an excellent target for German bombers and torpedo bombers. The German Air Force at this time dominated the air. The first order gave the ship a good chance to leave the Crimea and reach Tuapse. Therefore, Captain Plaushevsky was outraged by the second order: to go to sea at 17 o'clock, in the daytime! Such an order could lead to the death of thousands of people.

Then two more fatal orders followed. With the first order, “Armenia” was instructed to enter Balaklava and pick up the NKVD officers, wounded and medical personnel there. Also, the ship received some kind of secret cargo. Now there is no data on what kind of cargo was loaded onto the ship in Balaklava. There is an opinion that they loaded museum valuables and paintings. According to another version - documents and gold. The ship stood in Balaklava for several hours. There were still chances to leave under cover of darkness.

However, Plaushevsky receives a new fatal order. Go to Yalta and pick up party workers, the NKVD and a few more hospitals. At 2 am on November 7, 1941, "Armenia" was in Yalta. The city was in chaos. There was no police, someone was smashing and robbing shops, warehouses and wine cellars. The NKVD fighters organized the landing. Here, the transport received several more walls of people and cargo. Loading went on until 7 o'clock in the morning.

At 8 o'clock on November 7, the "Armenia" departed from the Yalta port in Tuapse, accompanied by one patrol boat. The sea was stormy, it was raining, which reduced the already small capabilities of the patrol to protect the transport. The fact that the transport was covered by two fighter planes, which allegedly "missed" the attack of an enemy plane, sometimes mentioned in stories about the event, is not supported by documents.

It is interesting that Admiral Oktyabrsky, knowing the operational situation and where the "Armenia" is located, gave instructions not to leave the ship from Yalta until 19:8, that is, until the evening. Plaushevsky received this order, but left Yalta. This is another secret of the death of the ship. It is possible that this was due to the fact that there were no air defense systems in Yalta, and the Germans were approaching the city (they captured Yalta on November XNUMX). That is, the Nazis would easily have destroyed "Armenia" in the port with the help of aviation or simply with field artillery. Therefore, the captain decided to risk going to sea. In inclement weather, the chances of leaving without loss increased.

According to the testimony of a sailor from Yakovlev's boat, a German reconnaissance officer appeared at about 10 o'clock. After a while, on low level flight, almost touching the water, two enemy torpedo bombers entered the area. One went in the direction of Yalta, the other attacked, but missed. The second torpedo bomber acted successfully. At 11:25 am “Armenia was attacked by Heinkel He 111. As a result of a direct hit from a torpedo (as previously thought) or two, a strong explosion occurred. The transport sank in a few minutes. A watchman in a rough sea was able to save only 6 or 8 people. It was about 30 km to the coast, the water was cold, so almost everyone died.

After the war, they tried to find "Armenia" more than once, but without success. They found ancient ships, ships that died in the course of two world wars, but not an ambulance ship. Only during a search operation conducted by the forces of the Russian Ministry of Defense in 2017, a magnetic anomaly was found at the bottom. In March 2020, at these coordinates, the wreckage of the "Armenia" was discovered by a deep-sea complex under the control of specialists from the Center for Underwater Research of the Russian Geographical Society. The vessel was located 18 miles offshore at a depth of 1500 meters.

No traces of the torpedo attack were found. However, the superstructures and upper decks were severely damaged. It is possible that "Armenia" was bombed. This confirms the version that the ship was attacked by 4 German planes, which bombed the middle part of the ship. 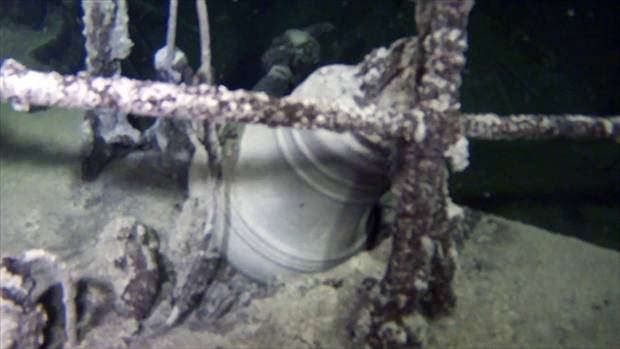 Rynda "Armenia". Frame: video of the Center for Underwater Research of the Russian Geographical Society