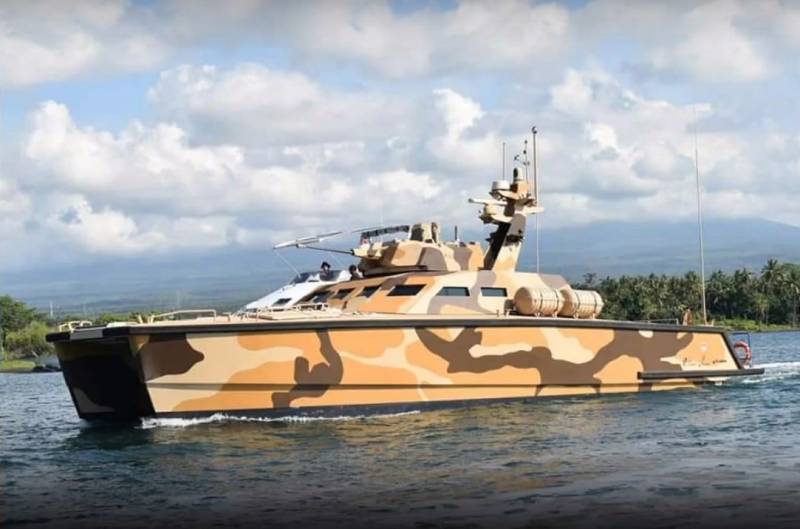 The Indonesian industry has completed the construction of the head artillery armored boat X18 Tank Boat. The product was launched and is now engaged in sea trials. The real prospects of this long-term construction project have not yet been determined, but its developers believe that the boat has a great future.

Armored boat projecttank X18 was created by the Indonesian company RT Lundin Industry Invest. The main area of ​​its activity is the development and construction of various boats and boats for civil and dual-use, but attempts are being made to create more sophisticated equipment for fleet.

For the first time they talked about the X18 boat in 2012. Then they revealed the very existence of the project, and also talked about the possibility of obtaining high technical and combat characteristics, for which it was planned to introduce a number of bold technical solutions. In 2015, at a regular event, they showed a mock-up of the X18 Fire Support Vessel with a reinforced armament complex; also revealed the main tactical and technical characteristics. 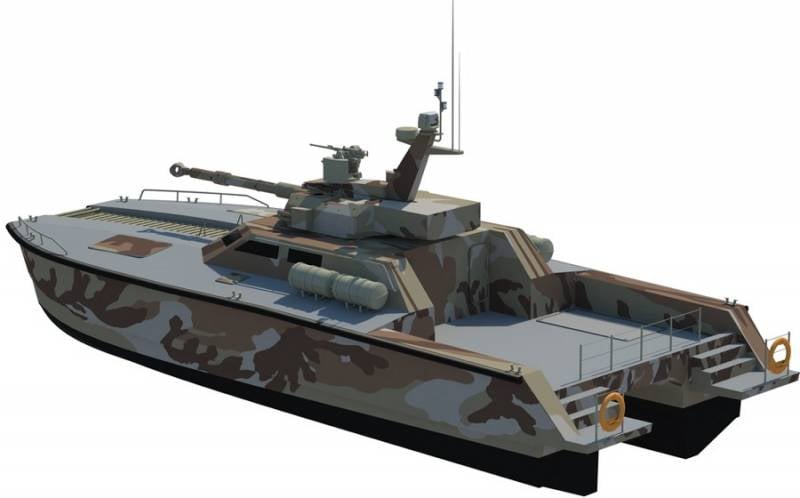 Project appearance of a boat with a 105-mm cannon
The development company claimed that the Indonesian naval forces were interested in the proposed project. This information was true, and in the same 2015, a contract was issued for the construction of the first "boat-tank" for testing and subsequent evaluation. According to the terms of the contract, the state-owned company PT Pindad (Persero) is the main contractor and integrator for the project. The construction was commissioned by RT Lundin Industry Invest, and a number of other companies were attracted as suppliers of the units.

The construction of an experimental X18 started at the beginning of 2016 at the RT plant Lundin Industry Invest in Banyuwangi. In August, the development company published photos of the construction. By this time, the hull contours of the catamaran circuit were formed, but the work continued. At the end of the year, a full-size mock-up of the boat was shown at the exhibition.

For a number of reasons, probably of a technological and economic nature, the construction and equipment of the lead boat was completed only now. On April 28, the X18 was launched and the very next day it started sea trials. The timing of their implementation has not been specified. The views of the potential customer on the new project are also unknown. 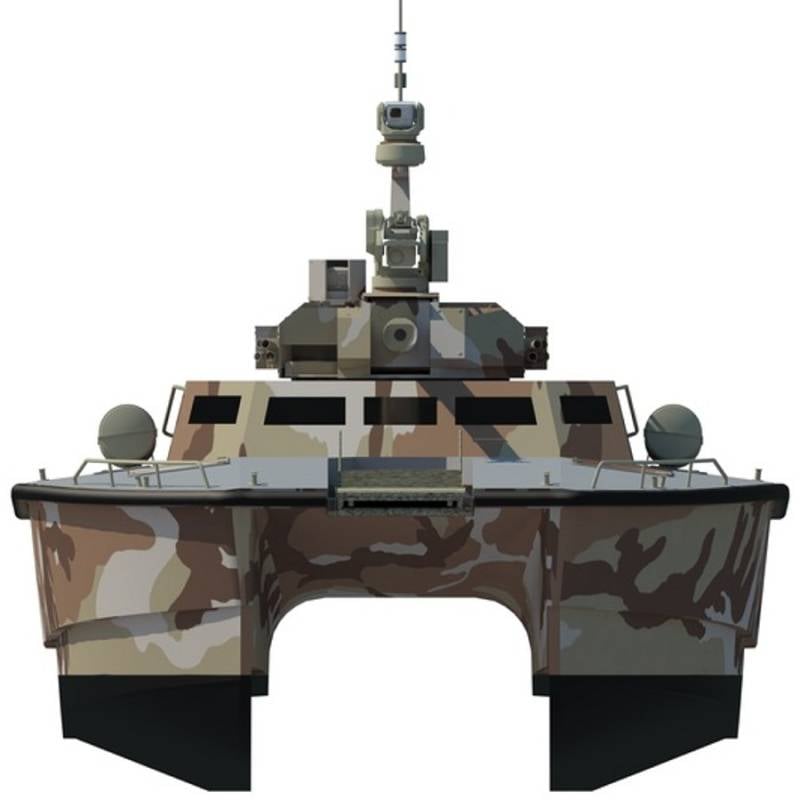 The X18 project proposes the construction of a catamaran boat with a length of 18 m and a width of 6,6 m with a normal draft of 1 m. The boat has ballistic protection, can carry artillery and machine-gun weapons of various types, and also carries troops. It is designed to perform a wide range of tasks on rivers and in the coastal zone of the seas.

The boat is built according to the catamaran scheme with two side hulls, in which some of the units are located, and a wide bridge that forms a deck and forecastle of sufficient volume. In the central part of the boat there is a superstructure, on the roof of which there is a seat for a combat module. A mast with electronic equipment is installed behind the module or directly on it.

The main structures of the boat are proposed to be made of composite material, the name and composition of which are not specified. According to the developers, such a body is 10 times lighter than steel and 10 times stronger. In addition, according to the sad experience of previous projects, the composite was made non-combustible. At the same time, the exact level of protection of the case is not named. Probably, anti-bullet and anti-fragmentation protection is provided. 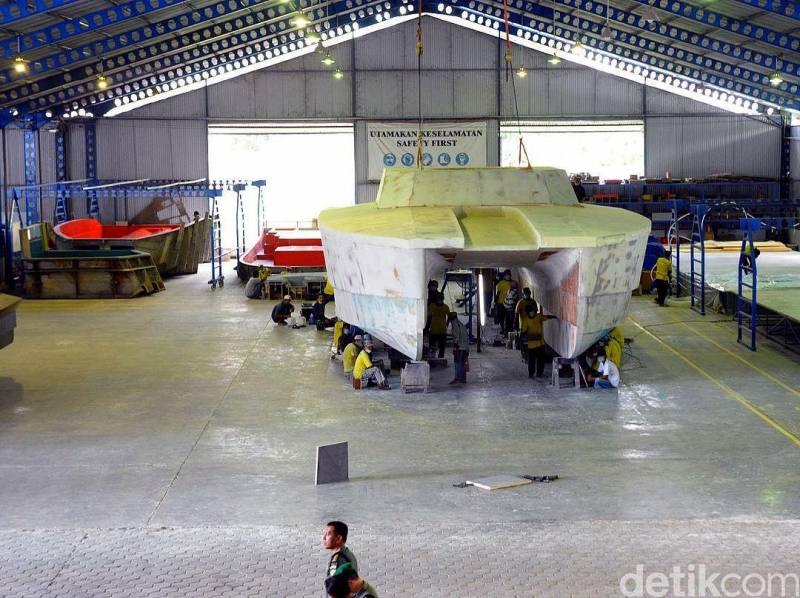 Building under construction, August 2016
The boat is equipped with two MAN 1200 hp diesel engines, each of which runs on its own water cannon. The declared maximum speed is 40 knots. The fuel system includes tanks for 5 thousand liters, which at an economic speed of 10 knots gives a cruising range of 450 miles.

According to early materials on the project, the armored boat was supposed to carry the Cockerill XC-8 105HP combat module manufactured by CMI Defense with a 105 mm rifled cannon and a normal caliber machine gun. An additional Lemur RWS 12.7mm module with a heavy machine gun is placed on the roof of such a tower.

During the completion of the project, the lead boat of the project received less powerful weapons. On the roof of its superstructure, a CMI Cockerill 3030 DBM was installed with a Bushmaster Mk 44 automatic cannon and a normal caliber machine gun. The boat also receives two M2 machine guns on open manually controlled turrets.

The project provides for the installation of a set of radio electronic means for navigation, communication, etc. Combat modules of all types are equipped with their own optoelectronic units and are controlled from remote controls inside the protected volume. 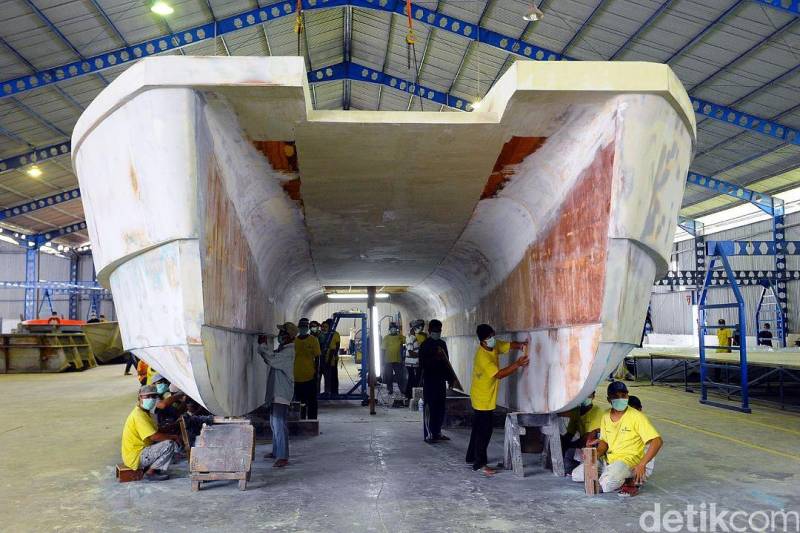 The composition of the crew depends on the selected weapons. Cockerill 3030 is operated by one operator, reducing the crew to four. A more complex turret with a 105mm cannon increases the crew to six. You can also place a landing party on board - 20 fighters with weapons and equipment. A folding ladder is provided on the bow.

In the near future, the X18 Tank Boat will have to go through the entire complex of tests under the supervision of fleet specialists, and after that conclusions will be drawn. If the prototype shows its best side and suits the Navy, a contract for mass production will appear. However, the required number of such combat units remains unknown.

The proposed armored boat has a number of positive features that may interest the customer. The catamaran hull design provides high running characteristics and allows you to work in shallow water, incl. to land troops directly on the shore. Bulletproof composite armor will protect against most of the expected threats, and artillery and machine-gun weapons will ensure the defeat of various targets and effective support for the landing. 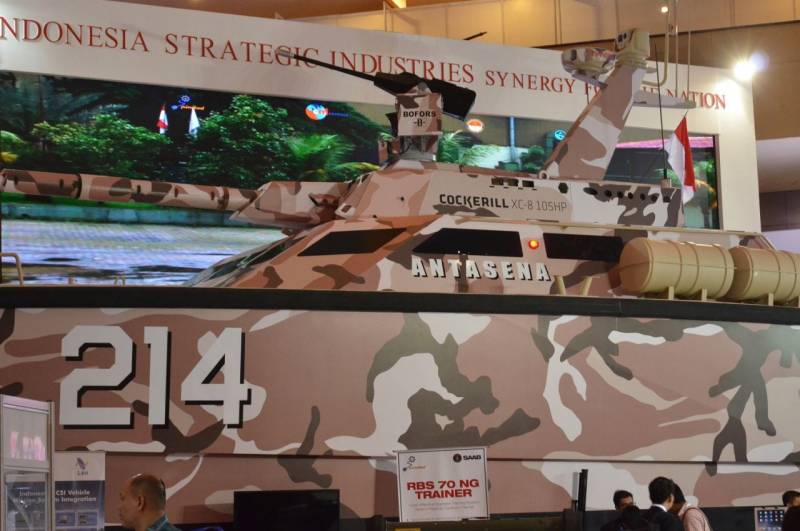 Full-size mock-up of a large-caliber boat
The project has no obvious drawbacks, although its main feature still raises questions. The hull and superstructure are made of a new composite, for which high strength and ballistic resistance characteristics are declared. To what extent this information corresponds to reality is unknown. Probably, these features of the project will become clear in the very near future, during the tests.

Thus, the X18 is a multipurpose armored boat capable of participating in various events and operations. Such units can carry out patrols in search of offenders, as well as intercept them or provide for the conduct of army or police operations. In this regard, the comparison of a boat with a tank makes some sense - although it would be more correct to call it a floating armored personnel carrier or a marine combat vehicle.

It should be noted that the Navy and other structures of Indonesia are interested in receiving X18 boats or other equipment with similar capabilities. Due to the country's geography, the military and security forces need a variety of tools to patrol large waters and long coastlines and monitor activity on thousands of islands. In addition, these boats must quickly transfer entire units and support them with fire. 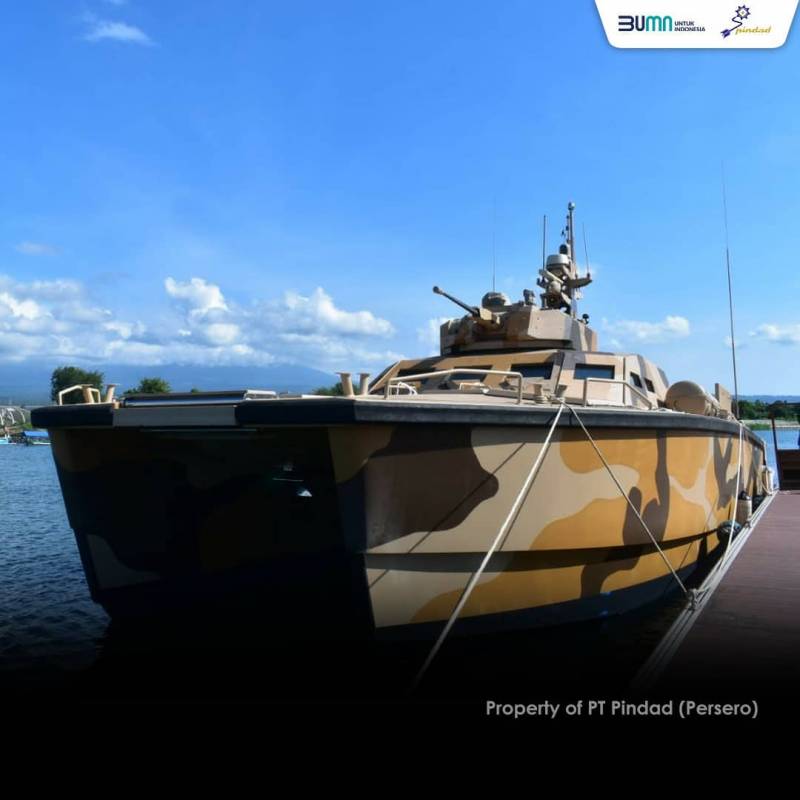 The proposed appearance of the "tank-boat" X18 basically meets the desires and requirements of a potential customer in the person of the Indonesian Navy. Several years ago, this fact led to the construction of a prototype, which is now being tested and demonstrating its capabilities.

There are no obvious reasons for pessimism yet. RT Lundin Industry Invest and its subcontractors can count on the approval of the fleet and receiving an order for a number of production boats. And there are new risks here. The construction of the lead boat took about five years, and the timing of the production of a fairly large series is in question.

Thus, a broad future opens up in front of the X18 armored boat with several options for the development of events. The pessimistic scenario provides for the failure of the tests and refusal of further work. Otherwise, the boat will receive the approval of the Navy and go into production. And further events will depend on the financial capabilities of the customer and the production potential of the contractor. They will make it possible to fulfill a large order in the shortest possible time - or stretch the construction of a few boats for many years.