On the "skeletons in the closet" of the West 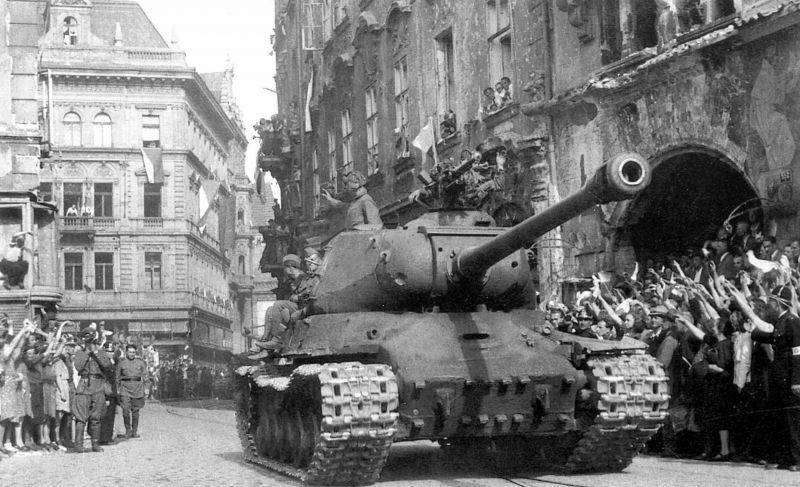 Tank IS-2 of the 1st Czechoslovak Army Corps (Czechoslovak combined arms formation as part of the 4th Ukrainian Front of the Red Army) in the center of Prague. May 10, 1945

In the Czech Republic, they talk about "skeletons in the closet" that remained in stories after World War II. However, if their fellow citizens are immediately forgiven for cooperation with the Third Reich, then Russia is again an "empire of evil".

Historian of the Institute for the Study of Totalitarian Regimes Jaromir Mrnka notesthat after the Second World War it was customary to tell mainly about heroic stories. But in modern times in the archives of various countries began to find "skeletons in the closet." In the Czech Republic, we are talking, first of all, about the support of the Reich and cooperation with the occupying fascist regime, about violence against the Germans after the end of the war, their extermination and expulsion. That is, in fact, ethnic cleansing took place in the Czech Republic. This was the revenge of the Czechs for the wrongs inflicted, which had been accumulating in society since the Munich Agreement.

In connection with attacks on the Soviet legacy (in particular, on the monument to Marshal Konev in Prague), with the Vrbetice case and the mutual expulsion of Russian and Czech diplomats, the "Russian question" in the Czech Republic took on a special acuteness. According to the Czech researcher, today's Russia has adopted many elements of the policies of tsarist Russia and the Soviet Union. Moscow allegedly claims the space of Central and Eastern Europe, which it received into its sphere of influence after the Great Patriotic War. The Russians are confident that they have liberated the peoples of Europe from fascism. And in Europe itself, they no longer think so.

The Russians point to the ingratitude of the Europeans. They are used to seeing themselves as “saviors” and seeing Russia as a world power equal to the United States. At the same time, Russians are completely indifferent to such moments of their history as the "Soviet occupation" of Eastern Europe. They keep silent about the "intervention" in Hungary in 1956, in Czechoslovakia in 1968, the suppression of protests in Poland, and so on.

Moreover, modern Russia seems to need enemies all the time. Moscow went further: "The element of fascism that appears in the conflict with Ukraine is very pronounced." Thus, at the level of meanings, Russia is put on a par with Hitler's Germany. The Russians are already on the "liberators", as in 1945, and the "occupiers", rapists "and" interventionists. Information preparation for a new crusade against the "Russian barbarians" is in full swing.

"Skeletons" of the West

Several generations have passed since the beginning of the Great Patriotic War, and Western Europe forgot about the terrible sacrifices of the Soviet people (the war claimed the lives of about 27 million of our compatriots, and the indirect losses are even higher). Moreover, today in the West and in the Russian liberal environment (which is much more monstrous) they put Hitler's Germany and the USSR, Nazism and communism on the same level, equate the winners with the vanquished, the aggressors with the victims. It comes to the point that the Soviet Union is already considered a greater threat to Europe than the Third Reich. Hitler is acquitted for his "preemptive" attack on Russia. And the USA and England are presented as the true saviors of mankind from the "red-brown plague".

Russians are drummed into the idea of ​​their civilizational and cultural "inferiority" and "inferiority", about their "criminal" past, about their "shameful" history and the need to "redeem" before the world democratic community. The West is shown as an "honest and noble" winner with an unblemished past. The USSR and modern Russia are held responsible for unleashing a world war. At the same time, the facts of the involvement of the Americans and the British in the outbreak of World War II are hushed up. They take this part of the story into the shadows to leave it there forever.

After all, it was the United States and England in the 1920s – 1930s that fostered and nourished Adolf Hitler and his misanthropic regime. They prepared Germany for a new big war, for a "crusade" to the East.

After the slave Treaty of Versailles in 1919, the Nazis simply could not restore a powerful economy, industry and a first-class army without outside help. Hitler received colossal assistance from outside - financial, economic, technical and political. The West allowed Berlin to break the bonds of Versailles, restore full-fledged armed forces and crush almost all of Europe.

Washington and London were generous: Hitler seemed like the perfect "battering ram" to crush Soviet civilization and the creative society, which became a real alternative to the Western slave-owning order. The United States and England, until the very end of the war, tried to use Hitler and his entourage for their own purposes. And they joined the ranks of irreconcilable fighters against Hitlerism only when they realized that the Third Reich was losing the war. That the Russians are capable of freeing the whole of Europe from the Nazis.

Only generous Western loans, technology and information support allowed Germany to regain its status as the leader of the economy of pre-war Europe. The Rhineland was returned to Hitler, Austria, the Czech Sudetenland, and then the whole of Czechoslovakia were "fed". The Nazis were allowed to crush Poland, which at that time dreamed of smashing and dismembering Russia together with Germany. They gave Northern Europe to the Germans and surrendered France almost without a fight.

Therefore, the Fuhrer, instead of finishing off England, which was reasonable and logical, opened a second front in the East and began a fatal war against the Russians. It is obvious that Hitler was completely confident in his rear that his former "sponsors" would not interfere in the war with Russia. They will allow him to calmly organize and carry out a "crusade" of the West against Russia.

This truth about the Great War is hidden in the West.

They are trying to take revenge from Russia-USSR in the information field, humiliate and denigrate our ancestors, make our people obedient and obedient to the West. Establish a "new world order" on the planet (slave-owning system, kneeling down before the new masters of the planet).