The steel grip of "soft power": Turkey in Azerbaijan 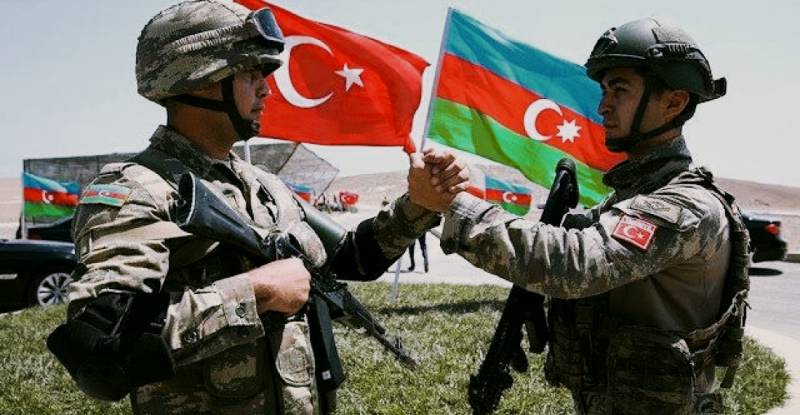 "The sorrow of Azerbaijan is our sorrow, its joy is our joy."
- Mustafa Kemal Ataturk.

Continuing our journey through the new possessions of Ankara, Azerbaijan should in no way be missed.

Despite the skepticism that prevailed in Russian analyst circles, Turkey has more than successfully entrenched itself in a number of former Soviet republics. In the previous article ("The steel grip of" soft power ": Turkey in Georgia") we considered one of the typical examples of the successful expansion of Ankara in the post-Soviet space. Georgia, however, is significantly different precisely in that it used mainly economic instruments to promote Turkish influence.

Azerbaijan is fundamentally different from the rest of the countries, firstly, in the final achievements of Turkey, expressed in a significant merger with the center of power (in the person of Ankara), and secondly, in the arsenal of means used for this.

At the same time, it is worthwhile to immediately make a reservation and say that relations between Turkey and Azerbaijan in this case can be viewed as a decent relationship between the overlord and his vassal. Ankara does not encroach on the sovereignty of the republic and does not humiliate its dignity. But their military, political and economic interconnections are obvious to the whole world.

“In the early 1990s, traditional pan-Turkic ideas about the creation of the Great Turan were revived again.
Turkish leaders started talking seriously about a new Turkic-speaking community from the Adriatic Sea to the Great Wall of China. At the same time, Ankara did not doubt its ability not only to replace Moscow in the role of the “elder brother” of the Turkic peoples, but also to exclude the possibility of direct Western influence in the region.
On the pages of the Turkish media, the idea of ​​a historical chance "to restore the Turkic unity" began to be persistently carried out. Instead of the words "Uzbek", "Kyrgyz",
"Tatar" and others to denote ethnicity of steel
used such phrases as "Uzbek Turk", "Kyrgyz Turk", "Crimean Turk".
The term "external Turks" came into circulation, which meant the Turkic peoples living outside Turkey ... "
- S. Druzhilovskiy, “Turkey: the habit of managing”.

Starting to analyze the topic of relations between Turkey and Azerbaijan, one should dwell on one extremely remarkable and interesting fact.

Turkish and Azerbaijani languages ​​are extremely similar. They have a common origin and, as linguists say, in ordinary everyday conversation, the inhabitants of these countries can easily understand each other. Of course, such an absence of a language barrier simply could not but play its favorable role.

Of course, in the Russian information space, Ankara's actions were viewed exclusively from the point of view of using military instruments of influence. It should be noted that this is an extremely one-sided approach that does not at all take into account the economic relationship between the two countries, without which any full-fledged cooperation in the defense sphere would simply be impossible.

During the first two decades after the collapse of the Soviet Union, Moscow's military and political influence in the post-Soviet space remained strong enough. To a certain extent, it held back any attempts to resume hostilities in the "frozen" conflict zones, one of which was Nagorno-Karabakh.

It is worth making a reservation and saying that without touching on the topic of the Armenian-Azerbaijani confrontation, it is impossible to consider Turkish-Azerbaijani relations. It was this conflict that to a large extent contributed to the development of relations between Baku and Ankara.

The impossibility of starting hostilities contributed to the fact that Azerbaijan was actively trying to find non-military ways to resolve the territorial dispute. It is known that the President of the Republic Ilham Aliyev offered Armenia even such options as the buyout of Nagorno-Karabakh - however, to no avail.

The Turkish Republic, in turn, in those years was mainly engaged in the economic and cultural merger with Baku. It was a very systematic and high-quality work, which formed a solid foundation of Turkish influence in Azerbaijan.

To date, the volume of bilateral trade between states is at the level of $ 5 billion (according to the plans of the leaders of the republics, the goal for the next years is 15 billion). To date, Turkish contracting companies have implemented 436 projects in Azerbaijan worth $ 16,3 billion (probably, the figures have already changed upwards). Ankara has also been the leader in terms of direct investments in the non-oil sector of the Azerbaijani economy for many years: by 2015, they amounted to $ 220,4 million. 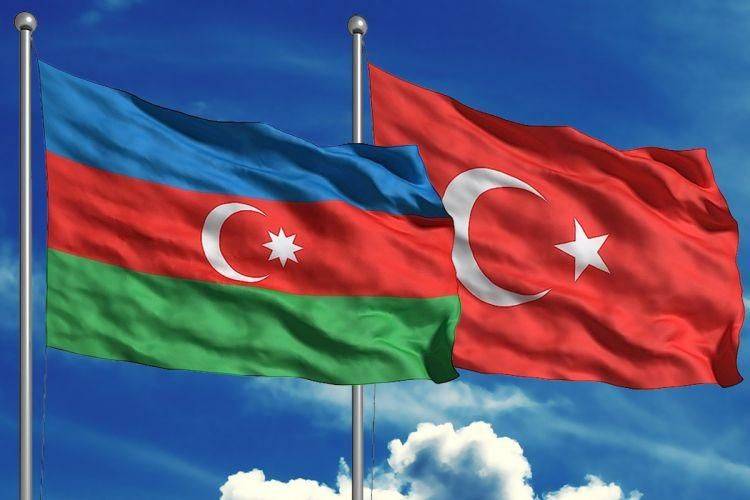 The general investment climate of the countries is extremely favorable: from 2002 to the present, Baku has invested $ 19 billion in the Turkish economy. 62,4% of these investments were in the service sector, 32,9% in financing and insurance, 24,2% in manufacturing, 11% in energy. Thus, Azerbaijan is among the top ten largest investors in Ankara. And it is worth recognizing that this process is absolutely reciprocal: Turkey has invested about $ 13 billion in the Azerbaijani economy.

It is also worth mentioning that currently there are 4,2 companies with Turkish capital operating in Azerbaijan.

“We give priority to Turkish companies within the framework of various restoration works (in Karabakh). I am glad that Turkish businessmen are sending a large number of proposals for participation in these works. A number of Turkish companies have already been involved in the process of creating the appropriate infrastructure in the liberated territories, and we will continue active cooperation with Turkey in this direction. "
- Mikail Jabbarov, Minister of Economy of Azerbaijan.

At present, the countries have become even more active in pursuing a policy of strengthening economic ties. Apparently, in the future, Baku and Ankara see them as a complete merger. As mentioned above, the republics are striving to achieve a trade turnover of $ 15 billion. To this end, two new agreements have been signed: "Memorandum of Understanding on the Agreement on the Simplification of Customs Procedures" (the so-called "digital trade agreement") and "Preferential Trade Agreement".

This will entail an even greater flow of mutual investments, contribute to a decrease in fees for goods when crossing customs and simplify document circulation.

Separately, it is worth talking about such an aspect of "soft power" as direct relations between the Turkish and Azerbaijani population.

"Welcome to the nest."
It is with these words that Turkish border guards meet Azerbaijani citizens in their country.

It should be said that at least 700 Azerbaijanis visit the Republic of Turkey annually. This year, another significant fact was noted - the complete abolition of passports. Citizens of the two countries will be able to travel to each other according to internal documents.

Turkey has a very reverent attitude towards the inhabitants of Azerbaijan: the latter are perceived as brothers, and they have access to all the privileges of the indigenous population, up to simplified customs control. All goods and services for them cost as for their own citizens, and not as for foreign tourists. The Turks even call the Azerbaijani language cleaner and closer to the Turkic original than their own.

Of course, such an attitude could not fail to bear fruit.

This is not populism or ineffective political slogans - this is a real fusion of two kindred peoples.

Real military cooperation between the countries emerged only in 2012.

For a long time it was limited and modest and did not appear to dangerous outside observers.

This could be explained by the strong influence of Moscow, which was the main supplier of arms to Azerbaijan. As known, weapons the market is also about after-sales service and training of military personnel. 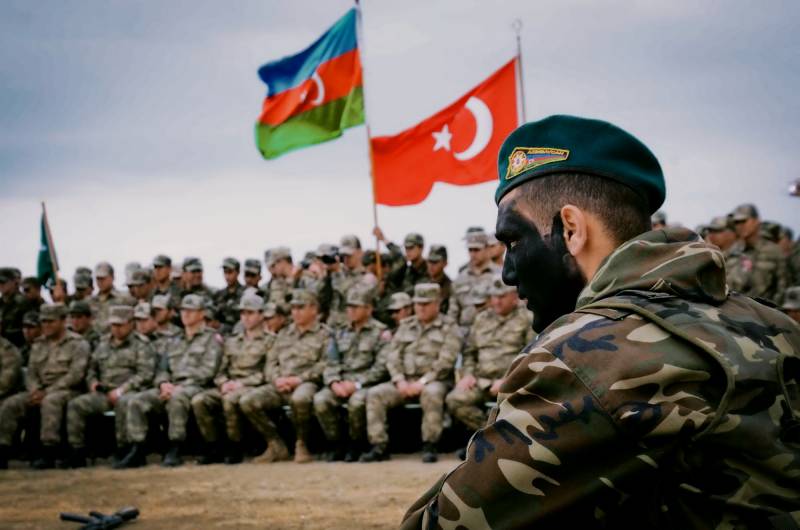 At that time, many Azerbaijani officers had exactly Russian military education.

The situation began to change dramatically after the signing of the 21st article of the "Agreement on Cooperation in the Field of the Defense Industry" in 2017.

After that, the full penetration of Turkish influence into the military structures of Azerbaijan began.

The essence of the 21st article was to organize the training of the officer corps of Azerbaijan on the training and material base of the Turkish armed forces.

According to 2019 statistics, 18000 future officers of the Azerbaijani Armed Forces were trained in Turkish military academies, and at least 8000 active military personnel received additional retraining there.

It was these people who made up the backbone of the forces of the Azerbaijani army during the second war for Nagorno-Karabakh.

The second significant aspect of military cooperation was joint exercises: "Falcons of Turkey and Azerbaijan", joint exercises of special operations forces, which are held alternately on the territory of one of the states, regular exercises "Anatolian Phoenix" and "Winter".

After the victory in Nagorno-Karabakh, the final stage of dismantling the Russian political influence on the Azerbaijani army began: due to ties with Moscow, Chief of the General Staff Najmeddin Sadykov was dismissed and fired, and young officers with combat experience are actively ousting the old composition, which still has a Russian military education.

The fact of the growth of the power and capabilities of the defense-industrial complex of Turkey turned out to be no less significant. It was thanks to this that the process of active purchases of Turkish arms began (this was not observed before). Thus, the export of military products to Azerbaijan in 2021 increased by 850,4% compared to the first quarter of 2020.

An important agreement on cooperation in the defense industry was signed between Turkey and Azerbaijan this year. The agreement implies joint military research on the territory of the two countries. Thanks to this, Turkish defense enterprises will be able to expand their activities on the territory of Azerbaijan and create new production facilities in the republic.

On top of this, the annual strategic dialogue summit discussed the creation of three Turkish military bases on the territory of Azerbaijan, including on the Caspian Sea (which, of course, will pose a threat to our Caspian flotilla).

Summing up, we can say that Ankara has perfectly mastered the art of promoting non-force influence.

Turkey is patiently and skillfully looking for points of contact with countries of interest to it, carefully and consistently penetrating into all spheres of their existence.

This is how the new realities of interstate competition look.

This is how the power of "soft power" looks like - a weapon that conquers entire countries without firing a single shot.