Lack of armor: the Pentagon runs the risk of being left without new infantry fighting vehicles 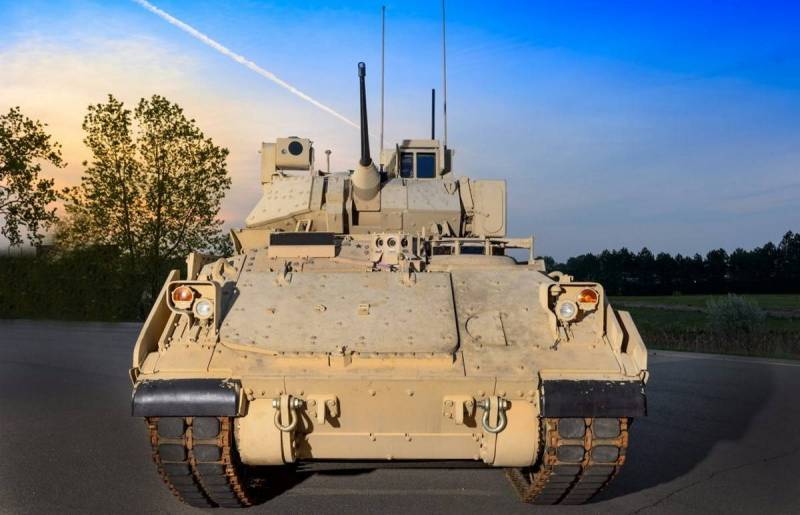 Strictly speaking, the Bradley family cars cannot be called overly obsolete. The start of production of the American BMP dates back to 1980. For comparison: the Russian army still serves morally and technically obsolete BMP-1 and BMP-2 vehicles, developed back in the late 60s. The modernization potential of the vehicles has already been exhausted, and the installation of the next generations of remotely controlled combat modules will not solve the problem. Obviously, there is an understanding of a similar problem in the United States. Only now, nothing sensible has come of it yet. Unlike Russia, where the state tests of the T-15 heavy infantry fighting vehicle on the Armata platform are underway, the United States does not even have a workable prototype. At the same time, an experimental batch of T-15 should appear in the Russian army already in 2022. Do not forget about the Kurganets-25 floating BMP, which should replace the BMP-3. 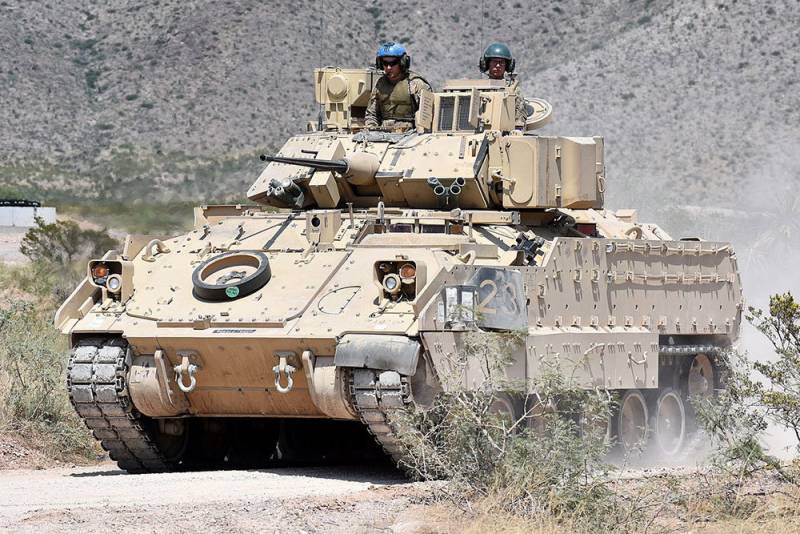 M2 Bradley. Source: wikimedia.org
Changing generations of armored vehicles is always very painful and expensive for the state budget. In the United States, the introduction of new infantry fighting vehicles can take 5-6 years, or even more. Now in the units of the ground forces and the National Guard there are at least 2,5 thousand M2A2 / A3 Bradley vehicles. And more than 2 thousand are in storage. Modern modifications for scouts and artillerymen M7A3 BFIST serve in the army in the amount of 334 copies. Wheeled infantry fighting vehicles М1296 Stryker Dragoon are still very few in the troops (up to 100 vehicles) and they are intended for other purposes. These are rather light, highly mobile infantry fighting vehicles and even armored personnel carriers with cannon armament. The Marine Corps is armed with the LAV-25 amphibious infantry fighting vehicle, which is an upgrade of the Swiss MOWAG Piranha I. Now the Marines have more than 300 vehicles, but they also cannot replace the heavy M2 Bradley. 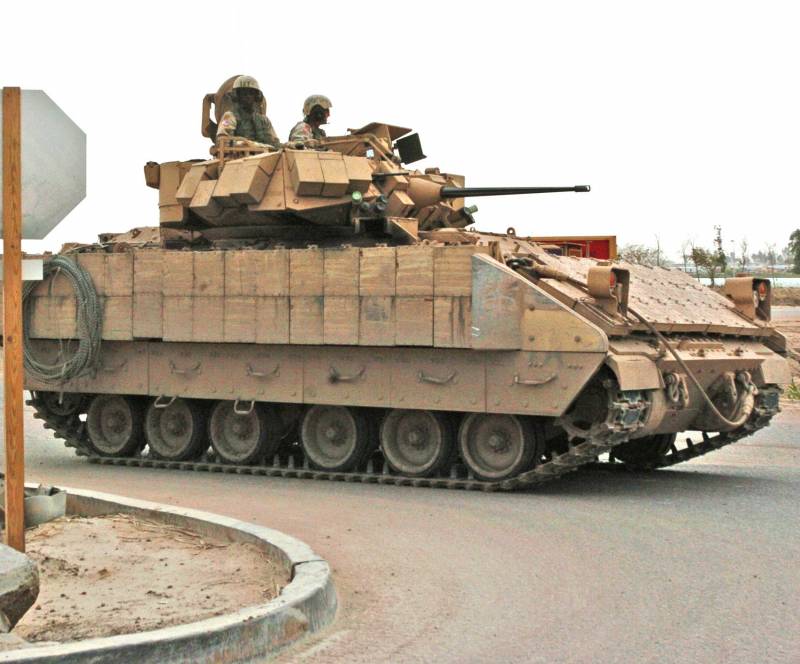 M2 Bradley. Source: vpk.name
Like any other Cold War machine, the M2 Bradley is a mediocre fit to the realities of modern conflict. In particular, in Iraq, BMP demonstrated insufficient survivability, especially against mines and improvised explosive devices. Despite the relatively heavy armor, the M2 Bradley remains vulnerable to light anti-tank weapons. Placing effective reactive armor on light armor is understandably very difficult, so the main focus is on active defense such as the Israeli Iron Fist. But the idea of ​​enhancing the armor of the DZ did not completely go away either. Only, according to engineering calculations, this will add another 1,5 tons of mass to the already not the lightest Bradley. It will also require the use of new materials. Coupled with the integration of the remote control system, modernization of electrical equipment, motor and transmission, it is much more logical not to disturb the well-deserved M2, but to develop a new generation BMP. But everything turns out to be not so simple.

The modernization of a combat vehicle with several decades of experience will keep it in good shape for another 10-15 years. But not more. The Pentagon understands this very well, and until recently they were conducting two projects at once related to tracked infantry fighting vehicles. First of all, a transitional modernization of Bradley was required, with which you can buy time before the appearance of a new generation of machines. In the "road map" of the Pentagon, two upgrades at once acted in this role - up to the M2A4 and M2A5 levels. Among other things, the A4 machine was supposed to receive a 30-mm M813 cannon, new guided missiles, a combat control system mentioned by KAZ Iron Fist Light Decoupled and BRAT II DZ units (Bradley Reactive Armor Tiles). The new things are also a diesel 8-cylinder Cummins VTA903E-T675 with a capacity of 675 horsepower and a transmission HMPT-800-3ECB. Work started in 2015, and in accordance with plans in 2021, the first M2A4s were supposed to enter the ground forces. The Pentagon immediately reserved money for 473 armored vehicles. But in reality, BMPs will go to the military at best in the fall of next year. Of course, such a shift to the right can be explained by coronavirus reasons, but in this case there is an engineering miscalculation. Having loaded the BMP with new electrical equipment, the developers did not think about upgrading the batteries. As a result, during operational tests in Fort Hood, Texas, toxic gas was poured into the cockpit and fighting compartment from batteries. The developers expect to receive new, more capacious batteries only by January 2022, and then the test cycle will be repeated again. And only if everything is within the bounds of what is permitted, the A2A4 will appear in the army by September next year. Together with the next modification of the A5, these infantry fighting vehicles should serve in the ground forces until 2050! That is, a real second youth is planned for Bradley. 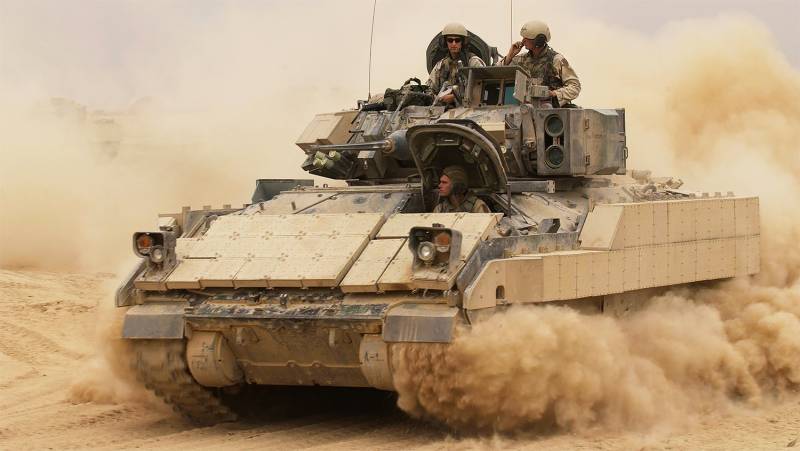 M2A3 Bradley at the Mackenzie Operations Base in Iraq, 2004. Source: gazeta.ru
The model of a deeper modernization of the BMP under the M2A5 index already implies a radical restructuring. The first cars should appear in the National Guard as early as 2023, but, obviously, the dates will shift to the right. History with A4 is an example. It is possible that the creation of a new "fifth" modernization will be canceled altogether in favor of the development of a new generation of infantry fighting vehicles. With the A5 model, the imagination of customers and developers was played out in earnest. The package included a laser cannon, surface-to-air missiles for countering drones and new DZ and KAZ systems. The car will be thoroughly blocked from the inside. They will strengthen the mine protection of the bottom, as well as transfer the ammunition stowage to a less vulnerable place. 3rd generation thermal imagers, automatic target tracking and friend or foe detection are also included in the Bradley M2A5 configuration list. Paradoxically, the Americans are counting on reducing the weight of the BMP.

The first attempts to replace Bradley with a fundamentally new machine took place back in 2003 as part of the large-scale Future Combat Systems (FCS) program. The Pentagon planned to completely change the BMP, self-propelled guns and main combat forces in 20-25 years. Tanks on new manned and unmanned armored vehicles. For the American military-industrial complex FCS is still a painful topic. In fact, they wasted, according to various sources, from 18 to 32 billion dollars. The total cost of rearmament of the US ground forces was estimated at an exorbitant 340 billion. The expert of the American Center for Strategic and International Studies Todd Harrison regretfully comments on the results of the failed rearmament:

"The FCS program was a massive failure and a missed opportunity to modernize the army."
According to the official version, funding was stopped in 2009 due to the concentration of efforts on the fight against terrorism. In addition, Pentagon experts twelve years ago did not really believe in the possibility of a direct clash with Russia and China, so they decided to forget about the generational change of armored vehicles for a while. 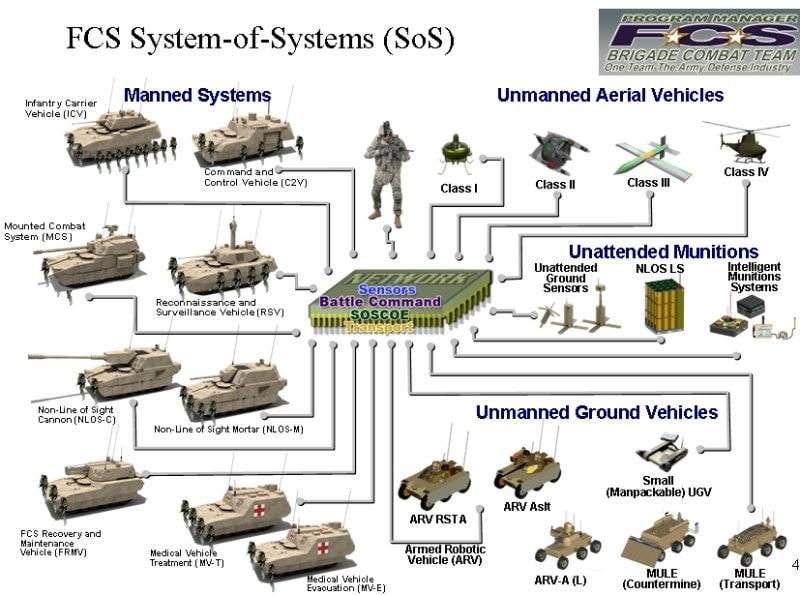 The plans to replace Bradley were only part of the massive FCS program. Source: globalsecurity.org
In 2010, for the second time, the Americans decided to replace the well-deserved Bradley with a new BMP in the Ground Combat Vehicle (GCV) project. According to calculations, it was supposed to be a 60-ton highly protected vehicle, which the troops were counting on in 2020. As you know, nothing sensible came of this. Largely due to excessive demands on the machine. The military wanted to see not just a new BMP, but an armored vehicle with a complex of revolutionary solutions. The BMP was supposed to be guaranteed to protect the crew and nine paratroopers from all angles from 30-mm shells, ATGMs, mines and RPGs. High mobility was provided by a hybrid power plant, and a promising 40-50-mm gun was responsible for the increased firepower. On paper, the BMP came out very well, but in reality it turned out to be overweight (more than 63 tons) and expensive (up to $ 20 million per unit). The Pentagon was not ready to purchase the planned 2000 infantry fighting vehicles at more than doubled the price. By comparison, the M1 Abrams costs taxpayers between $ 4,8 million and $ 6 million. The developers tried to reduce costs by offering an additional 155-mm self-propelled gun and an engineering armored vehicle based on the GCV. The problem of excessive weight was partly solved by excluding five paratroopers at once from the nine planned. The result was a 45-ton armored vehicle, which the BMP could hardly be called. Rather, it was a lightly armed tank with a miniature troop compartment. GCV in this configuration was hard to find a place on the battlefield. The army understood this and in 2014 the project was closed. 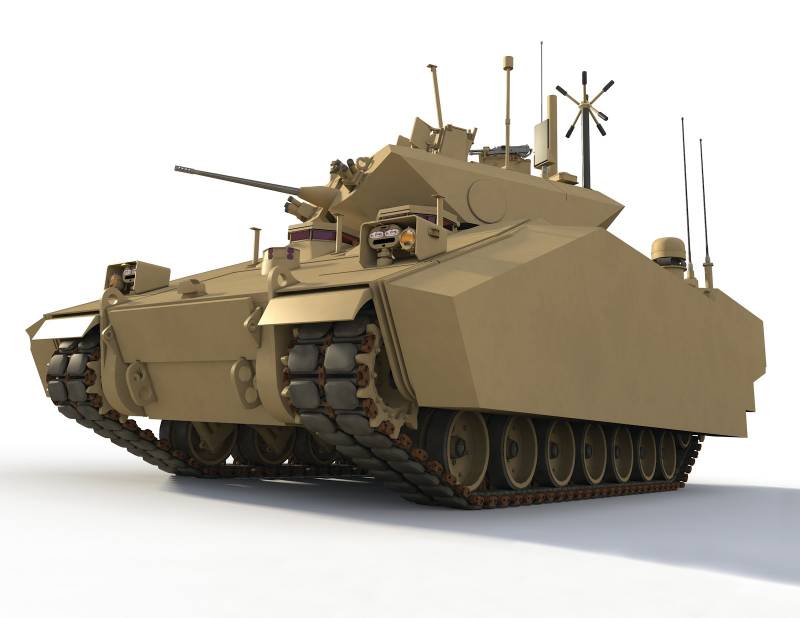 Infantry fighting vehicle project offered by BAE Systems for the US Army GCV (c) BAE Systems tender. Source: bmpd.livejournal.com
Remembered the concept of "two crew members + four / five paratroopers" in 2016 as part of the NGCV (Next-Generation Combat Vehicle) project. The military realized the impossibility of replacing the Bradley with a heavily armored infantry fighting vehicle with similar mass-dimensional characteristics, so they transplanted an infantry squad of 9 people into two vehicles at once. And later, in general, the very possibility of piloting was declared an option. So in 2018, the most modern project OMFV (Optionally Manned Fighting Vehicle) appeared. Now it is planned to have only two crew members, six paratroopers, elements of artificial intelligence in management and combat, as well as light weight. Once again, the Pentagon asks developers to reduce the weight of the combat vehicle, while providing a significant increase in security. The C-17 Globemaster transport aircraft should take on board two OMFVs at once. This means that the maximum weight of the BMP should not exceed 37-38 tons. 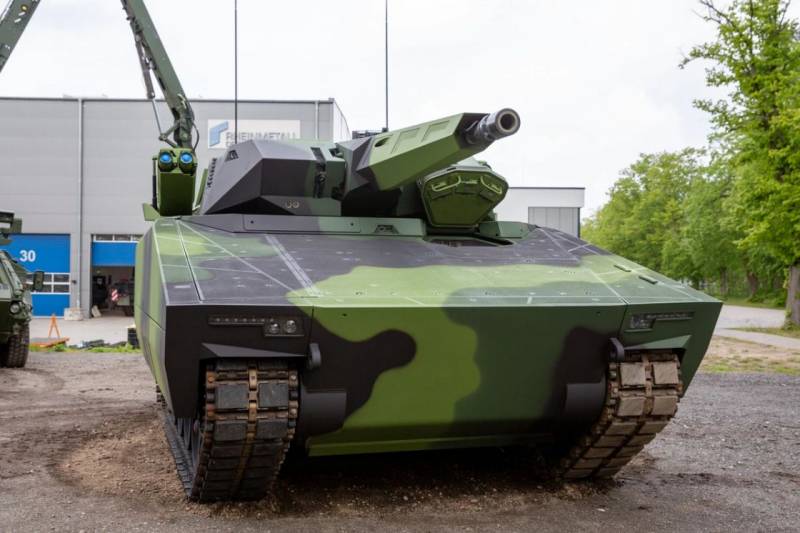 The BMP based on the Lynx KF41 may well become the new American Bradley. Source: armytimes.com
At the moment, all work on OMFV has been restarted - in January 2020, the Pentagon re-announced a competition for developers. If earlier the first prototypes to replace Bradley were expected by 2026, now everything is postponed indefinitely. In 2022, contractors will only decide on the concept of an armored vehicle, and by 2023 they will start designing the first technology demonstrator. Let us clarify once again that this is the most optimistic scenario for the Americans. One of the most likely contenders for the role of a promising American BMP may be the deeply modernized Lynx KF41 from Rheinmetall. The American company Allison Transmission has already announced that it is ready to cooperate with the Germans on the development of an electric transmission for the OMFV project.

For decades, the United States Army has been content with the role of poor cousins ​​versus the “wealthy” of the Navy, Air Force, and Marine Corps. The aggravation of relations with Russia and China makes the Pentagon think about the outcome of large-scale multi-domain battles. The lack of modern infantry fighting vehicles in service is a certain vulnerability of the American ground forces. It seems that for the foreseeable future, the infantry will fight in the good old M2 Bradley.