The road of private Torgovtsev is 78 years long

I don’t cling to the ground - I’m already the ground.
And how I fought - the sleeves will confirm.

Yuri Arutsev "What year have I been lying here, at the turn ..." 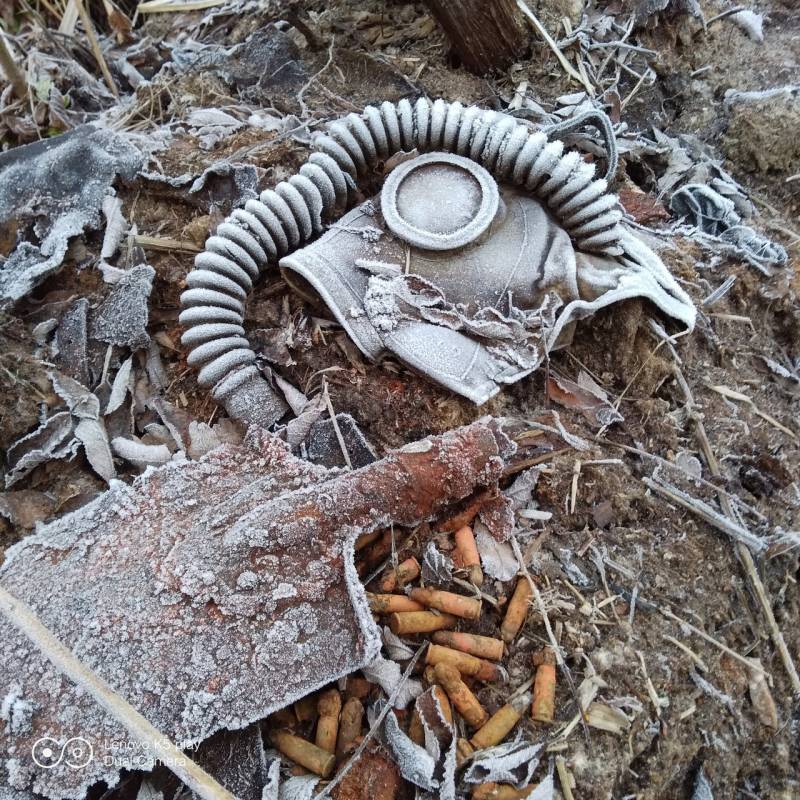 Probably, in some kind of opposition to all these "I remember, I am proud" and other external manifestations of "respect" for the feat of our great ancestors. Of course, in the sticker on an imported car, there is simply an abyss of respect for those who won the Great Patriotic War and World War II, as well as about the same amount in wearing a garrison cap sewn in China on May 9. 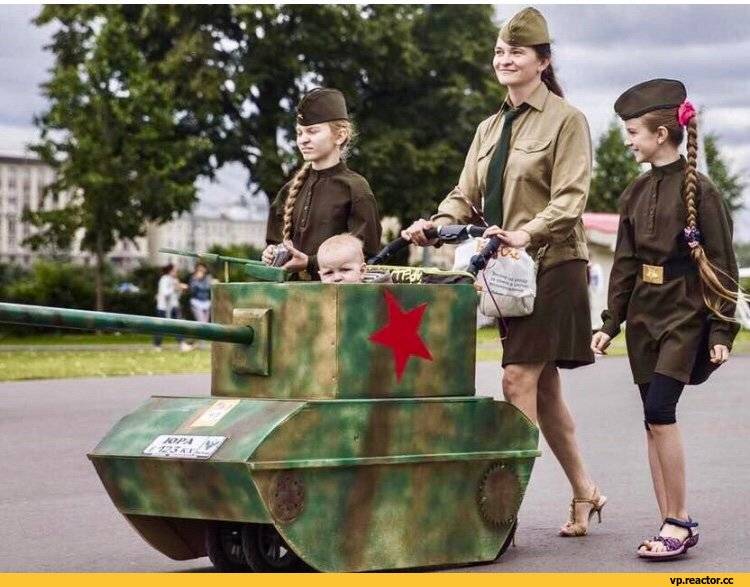 But here really, to each his own. And, once again quoting the great Russian poet of the Soviet era, Aleksandar Bashlachev, who sang in one of the songs “I was not with him, with others,” I want to talk specifically about others.

I have an acquaintance from the northern capital, in general we met on the website of one Russian performer from among the “not for everyone”. Then it so happened that he reads VO. A year of unhurried communication, discussing something, congratulating ...

And then suddenly, on a May evening, a fountain. Not even a fountain, I don't know what to call it, Niagara Falls in the opposite direction. WE! FIND A FIGHTER !! AND THE MEDALLION IS WHOLE !!!

With so many emotions one could easily illuminate the village if desired. I knew that Constantine was related to the search movement, because newsthat he and his companions found someone is not so surprising (I had a lot of reports on this topic), but what it became possible to identify is a rare rarity. Indeed a holiday. 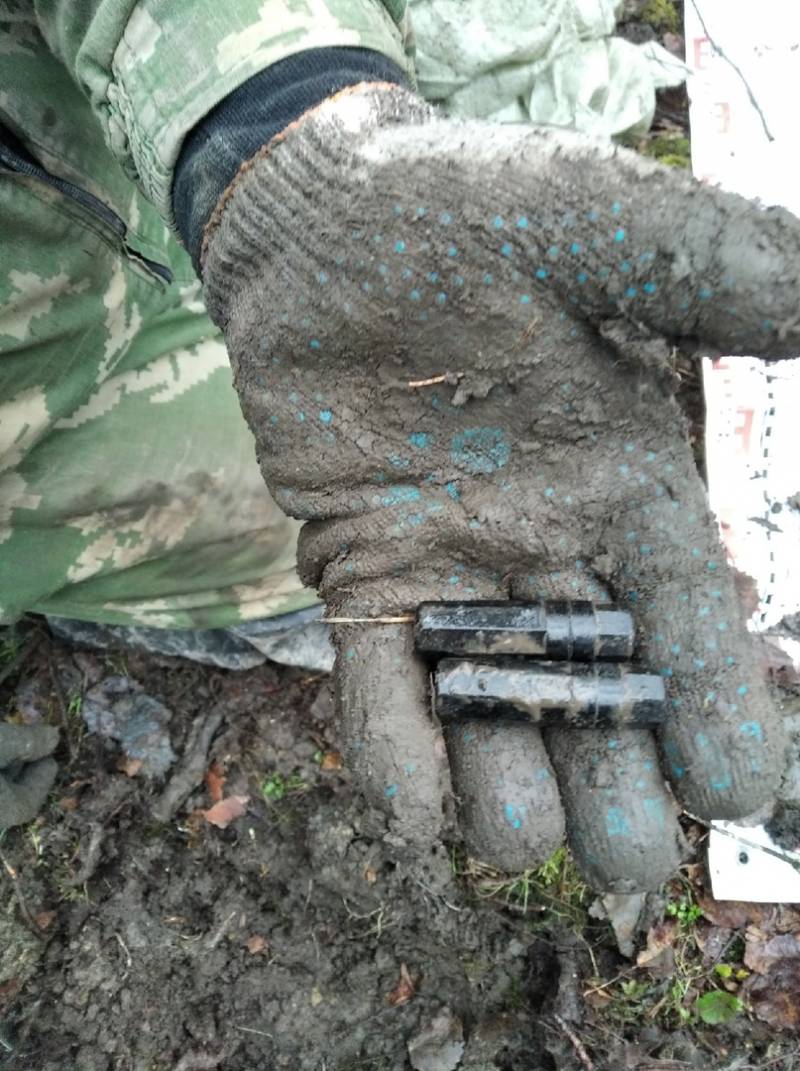 And I decided to ask around in more detail. The matter turned out to be completely simple, and on the eve of Victory Day I offer you a story of people who accomplished their Victory by creating a Miracle with a capital letter - by finding one of the fallen soldiers of that war.

Artem Perepelitsa, commander of the "Pathfinder" search unit of the OMIIPO "Valor": 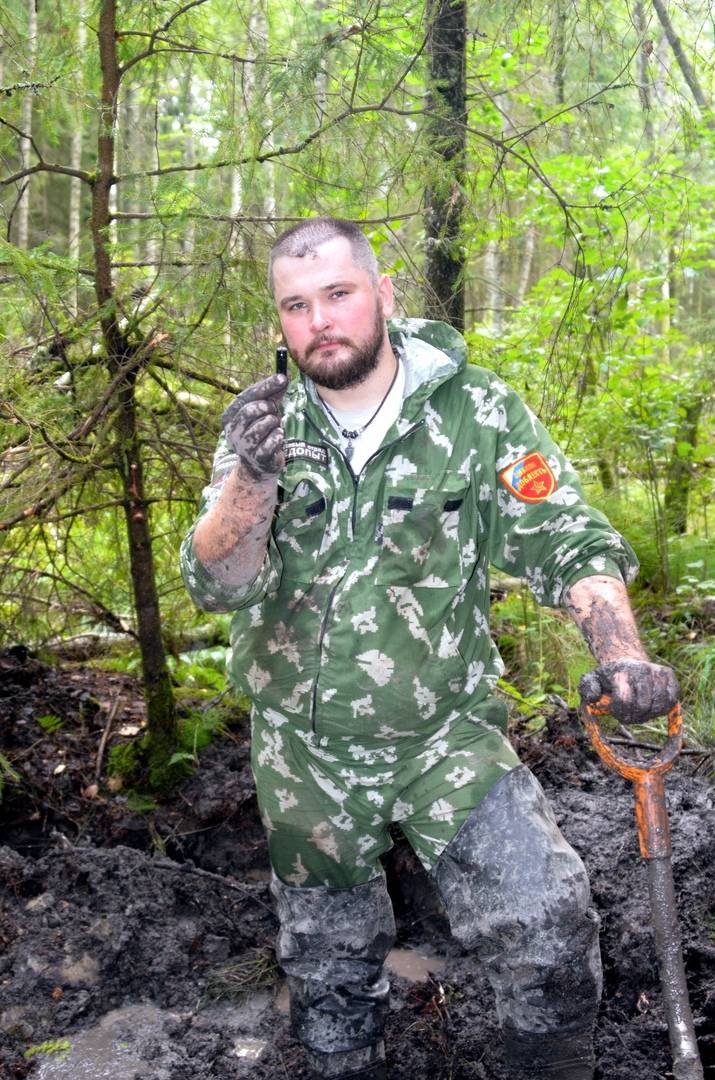 Not every exit we manage to find dead soldiers, it is even more rare to find signed things by which it is possible to establish an identity, and very rarely - to find a medallion, filled and readable. A death capsule containing information recorded by a soldier. His name, year and place of birth, details of relatives.

On May 3, 2021, my detachment left for a well-known place on the southern lines of the defense of Leningrad. We have been working on this very small patch of forest for 5 years. Paths have been passed many times, funnels, trenches and dugouts have been examined. But every year we find the remains of dead soldiers here.

This morning, a lot happened, it was in that place that we turned off the path, it was near that dugout that we folded our backpacks and worked with probes, it was near that bump under the probe that the iron clinked.

It turned out to be cartridges from a three-line, near which in the excavation we began to find fragments of ammunition, and there they were - the remains of a soldier. The whole group immediately got involved in the work and gradually removing the layers of soil and expanding the excavation, we removed the remains, laid them on a banner, sifted through every lump of earth in search of the most valuable - a medallion. And at some point a black capsule appeared from the ground ... 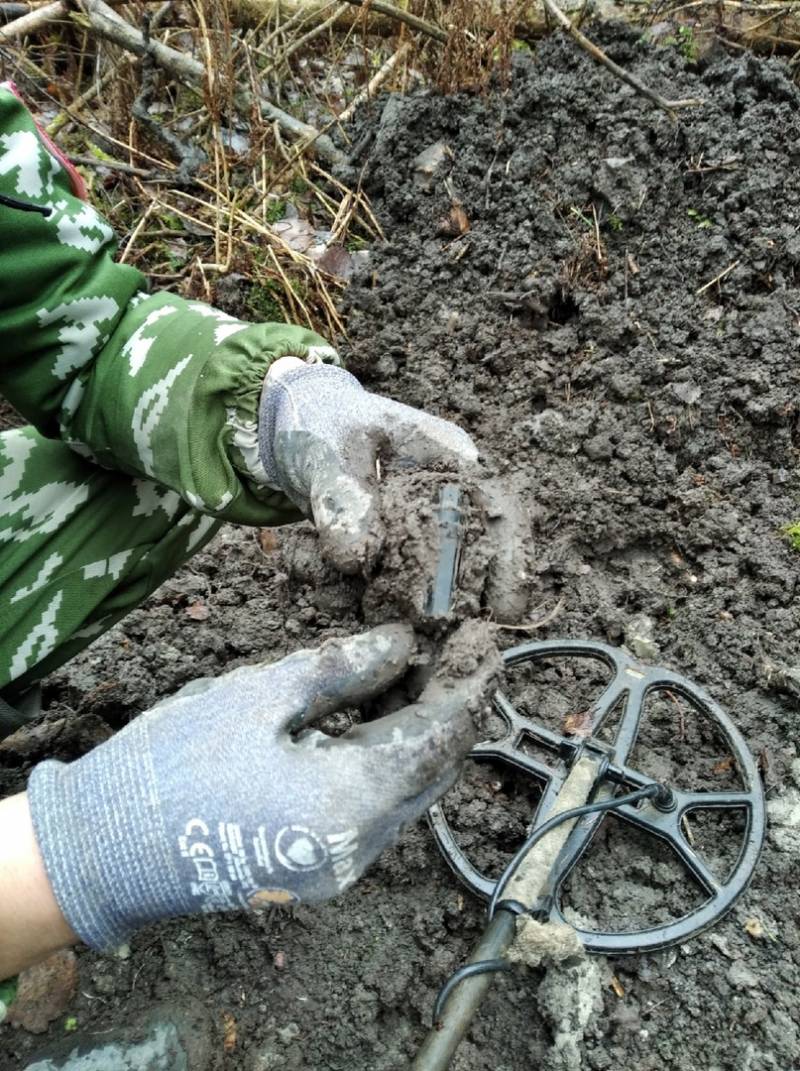 Everything worked out that day, the medallion was not empty and tightly closed, it was not lost in the excavation, the thin paper did not rot, and carried through the decades the words written in pencil by the soldier's hand.

The capsule was handed over to specialists for examination on the same day. The note was carefully removed from the capsule and unfolded. It had a name on it - Torgovtsev Nikolai Vasilievich.

The search for data on the soldier began, Alena Manshina was engaged in it. She did a lot of work in the archives and found out that Nikolai Vasilyevich was drafted in Leningrad in July 41 by the Vyborg RVK and fought in the 245 sapper regiment as an ordinary sapper. According to the unit commander, he died in July 1943.

Our squad is 5 years old this year. Over the years, more than a hundred trips have been carried out, the remains of dozens of Red Army soldiers have been raised, and only 4 medallions have been found. Only TWO of them allowed to establish the names of the fighters. 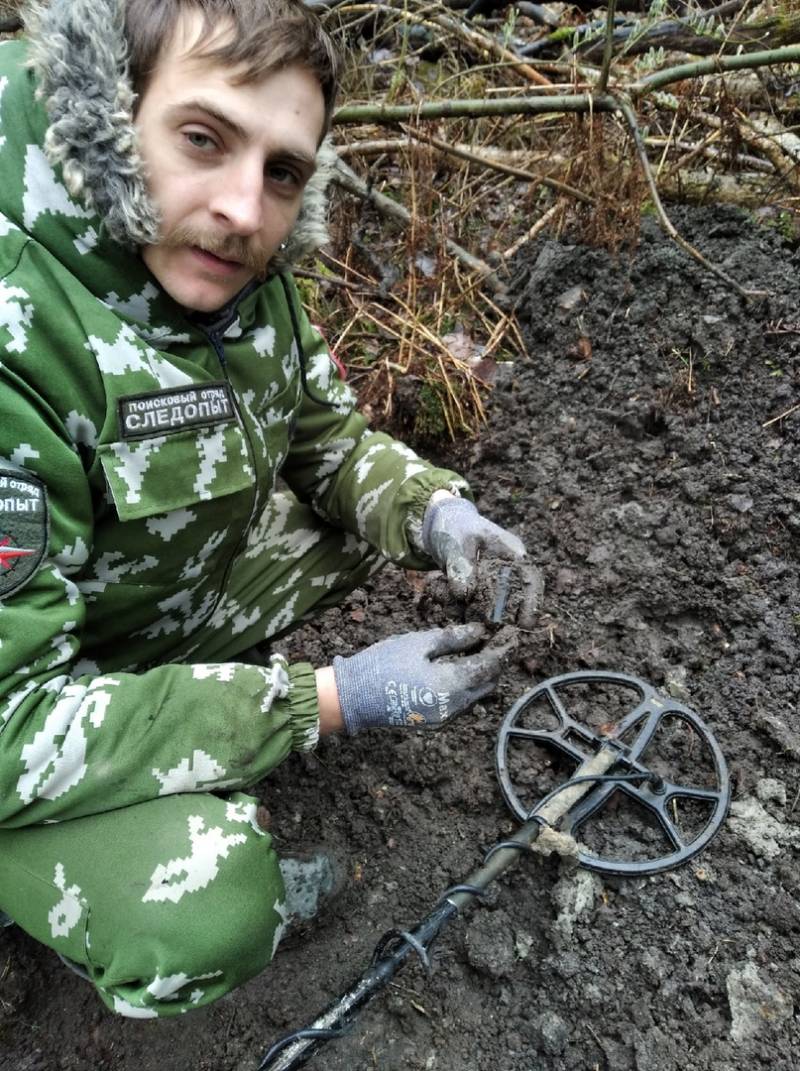 On the morning of May 3, the commander of the Pathfinder squadron, in which I have been a member since the summer of 2019, called me. It was proposed to go in search. I was not busy, there were no plans for the day,
therefore he immediately agreed.

This time the three of us went: Artyom Perepelitsa, the commander of our detachment, Sergey Baranov - his friend, who also stands at the origins of the Pathfinder, and me.

There were three places to choose from: Nevsky Pyatachok, where Artyom and I had raised (presumably) a German soldier a few days before, and two in the Krasny Bor area. We decided to go to the "TsPS" - a place near the central substation near Krasny Bor. 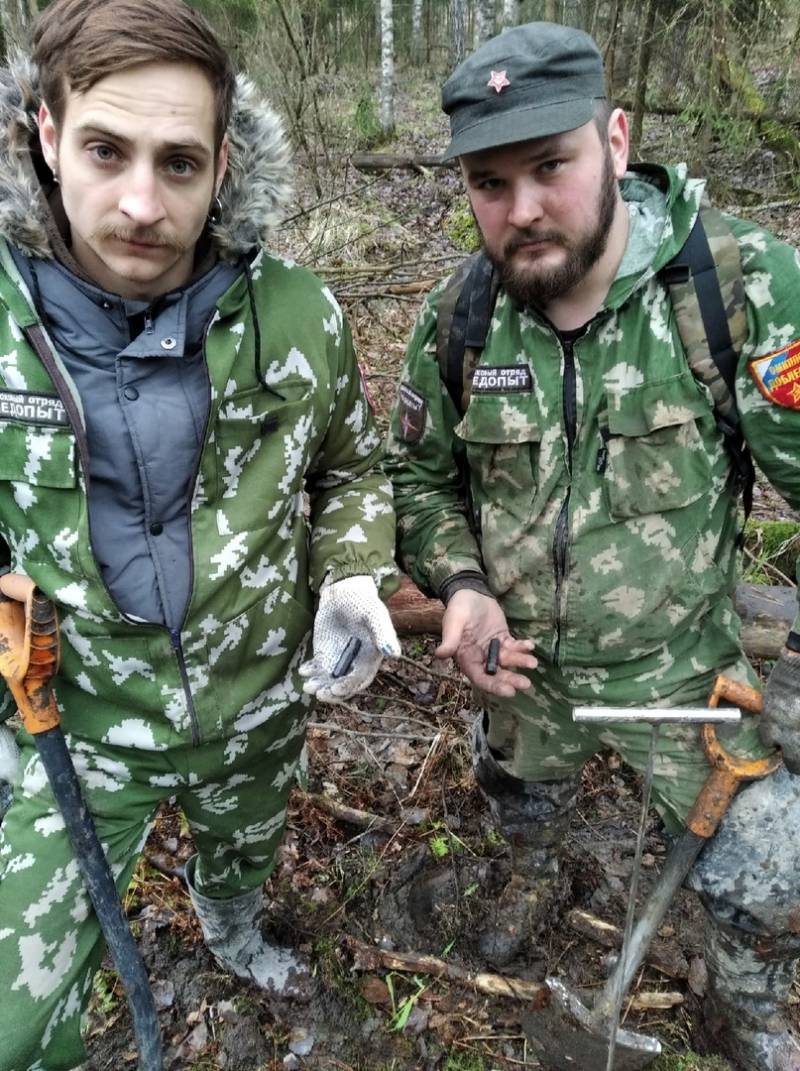 We decided not to go into the depths of the forest, to look closer to the road. Checked with a probe and a metal detector. But it was with the probe that they found the shells from the three-ruler near the dugout. We started work near the shot. And, working literally layer by layer on the ground, we found fragments of the remains of a soldier. In the truest sense of the word, archaeological work has begun. With your hands, with a knife, so as not to hit the fragments with a shovel. 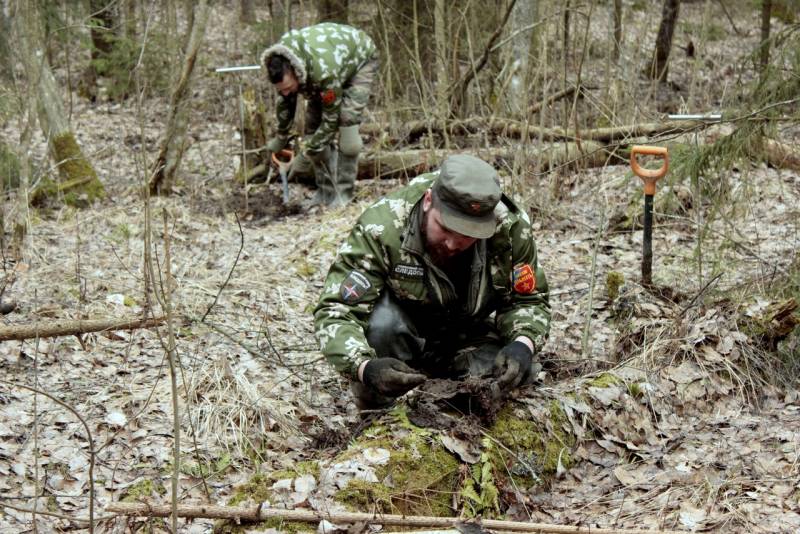 We didn't care: what the weather was, cold, wet - it didn't matter (and here, alas, we were not very lucky). We've found a soldier! And most importantly, a medallion was found. In our business, this is a huge rarity, especially if it is in good condition.

It was because of the state of the medallion that they decided to open it on their own. Artyom carefully opened the lid, and when it was removed, the surroundings were shocked by a triumphant cry of joy: inside there was a perfectly preserved note! This gave a very big chance that the soldier would be identified and it would be possible to find the relatives of the one who defended our Motherland.

Then we closed the medallion and, returning to the city, handed it over for examination. A little later, Artyom will call me and tell me that the note has been read, and the fighter has been identified ...

I cannot describe my emotions: this is the first time when I was not only able to find a missing soldier, but also to find out his name. This is especially dear to me.

Mixed feelings. I am so glad that I got into the squad and was able to become a participant in such a case as the return of the missing hero home. These are indescribable feelings. 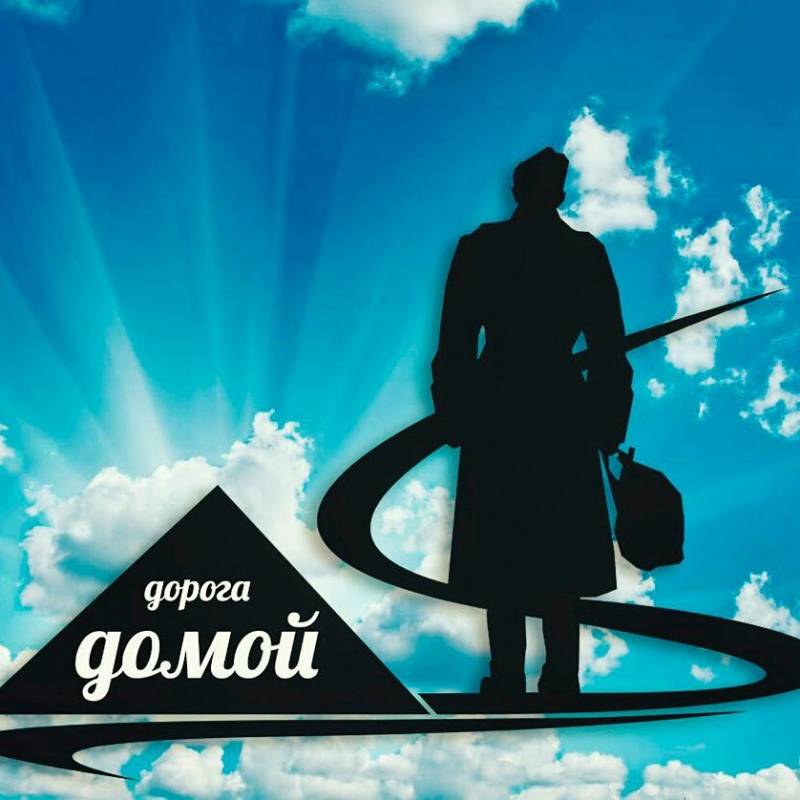 Two people in five years. How to establish and how to measure the value of such? How to evaluate the work of people who use themselves and their time in this way? By the way: in St. Petersburg on May 3, 2021, the air temperature was already 4 degrees above zero and the probability of rain was 90%. That is, it rains all day. Feels like minus 3 degrees.

Yes, everyone has their own approach to the topic of respecting and honoring the ancestors-winners. Someone just needs to stick a trophy sticker on the Audi, someone will spend a little more on a fake uniform. Someone will come out in any weather in order to search and dig. And find the fallen soldiers of that war. 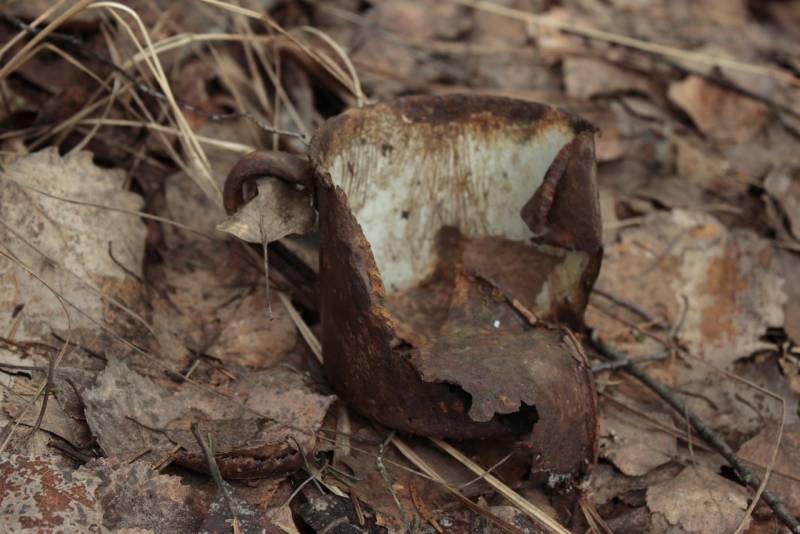 Respect in deeds, not in words, is a good slogan for the future. After all, without respect, we are just people.

And the sapper Nikolai Vasilyevich Torgovtsev will return the fighters of that war to the ranks precisely through the efforts of people who prove their respect for the victorious soldiers by deeds. So good luck to the search squadrons across the country. They really remember and are proud. In the field, with a probe, a shovel and a knife. As befits real people who respect the memory of their ancestors.

Ctrl Enter
Noticed oshЫbku Highlight text and press. Ctrl + Enter
We are
About Stalin and KhrushchevWhat you didn't want to know about England
Military Reviewin Yandex News
Military Reviewin Google News
21 comment
Information
Dear reader, to leave comments on the publication, you must sign in.