August 30 2012
106
The contract for the supply of combat helicopters for the needs of the Indian Air Force ended in victory for the American company Boeing, which will deliver Apache Longbow attack helicopters to the country of 22. According to experts, the sale of this type of weapon will not change the balance of power in the region. The amount of the transaction for the sale of helicopters, spare parts for them, as well as weapons systems is estimated to be at least 1,2 billion. The execution of this contract will deal with American companies: Boeing, Lockheed Martin, General Electric and Raytheon. The American Indian who won the competition stole the victory from the Russian attack helicopter Mi-28H “Night Hunter”.


The tender for the supply of 22 attack helicopters for the needs of the Air Force, the Indian Ministry of Defense announced at the beginning of 2009. In early July, 2010, it became known that the only bidders were the American Apache Longbow and the Russian Mi-28H “Night Hunter”. In addition to them, AgustaWestland and Eurocopter companies that presented A129 Mangusta and EC665 Tiger respectively participated in the tender. However, these companies came out of the tender, explaining his decision by not having time to prepare their helicopters for testing. Before 2009, the American company Bell Helicopter with its AH-1Z Viper helicopter also participated in the tender announced by India. However, the company came out of the tender, explaining that AH-1Z does not yet have an assessment of readiness for combat use.

Under the terms of the contract, India expected to receive a helicopter, the mass of which was to be at least 2 500 kg. The helicopter had to have an 2 engine, high maneuverability and speed, as well as modern anti-tank weapons, the ability to install a turret gun of caliber from 20-mm or more, as well as the ability to shoot 70-mm missiles. In addition, the attack helicopter had to be able to use missiles with an autonomous guidance system with a target range of at least 7 km. In order to perform tasks efficiently in the conditions of modern combat operations, it was required that the helicopter could be used in the desert terrain and high mountains, in any weather conditions and be equipped with a modern set of means for conducting electronic warfare. A condition was also made about the presence of a receiver informing the crew about the radar exposure of the helicopter. 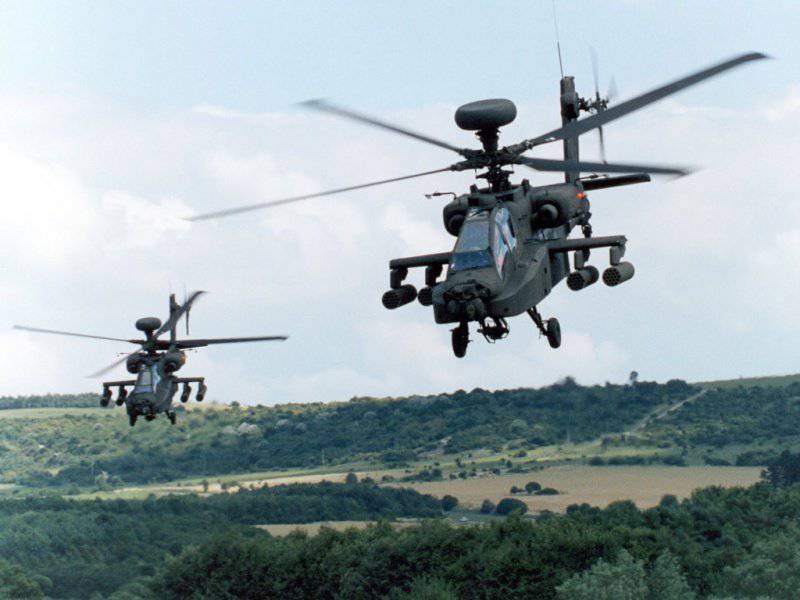 AH-64D Apache Longbow
The contract for the supply of attack helicopter AH-64D "Apache Longbow" will be implemented through a special US program of military assistance to foreign countries FMS (Foreign Military Sales). Its value is estimated at 1,2 billion. The agreement provides for the supply of Indian Air Force 22 helicopters, from 4 to 6 spare engines, as well as the AN / APG-12 Longbow 78 radar. 245 Stinger I-92H air-to-air missiles and air-to-surface guided missiles are on the list of aviation armaments: AGN-542 AGM-114R-3 AGM and 812 AGM AGM-114L- 3 Longbow Hellfire.

According to Indian representatives, the cost of helicopters is estimated at around 650-700 million dollars, while the cost of spare engines, radars and weapons is estimated at 450-500 million dollars. These data were published in the weekly all-Russian newspaper "Military Industrial Courier". Earlier in the media there was information that the amount of the contract announced by India is estimated at 1,4 billion dollars and according to its conditions, India should also receive 50 T700-GE-701D engines manufactured by General Electric, 12 interferometric radar AN / APR-48A and 12 radar AN / APG-78.

India currently holds the 4th place in the world in terms of the number of regular armed forces. At the same time, the military-political leadership of this state expects to transform the country's air force and air defense into well-balanced types of armed forces that will be able to support the actions of the ground forces and fleet, as well as striking at important objects located in the depths of the enemy’s defense and conducting a successful confrontation with all modern air attack equipment. It was within the framework of these transformations that a competition was announced for the supply of the country's air force with the most advanced attack helicopters.

Officials of the Indian military leadership note that the Apaches are intended to replace the Indian fleet of obsolete attack helicopters of another Soviet or Russian assembly. It is about replacing the Mi-24 and Mi-35, which will be withdrawn from the Indian Air Force. According to the American side, the Apache Longbow AH-64D helicopters, after a certain period of operation in the air force, can also be purchased for the Indian ground forces, where they will be part of the army corps aviation, which is used for air support of infantry and armored formations on the battlefield. 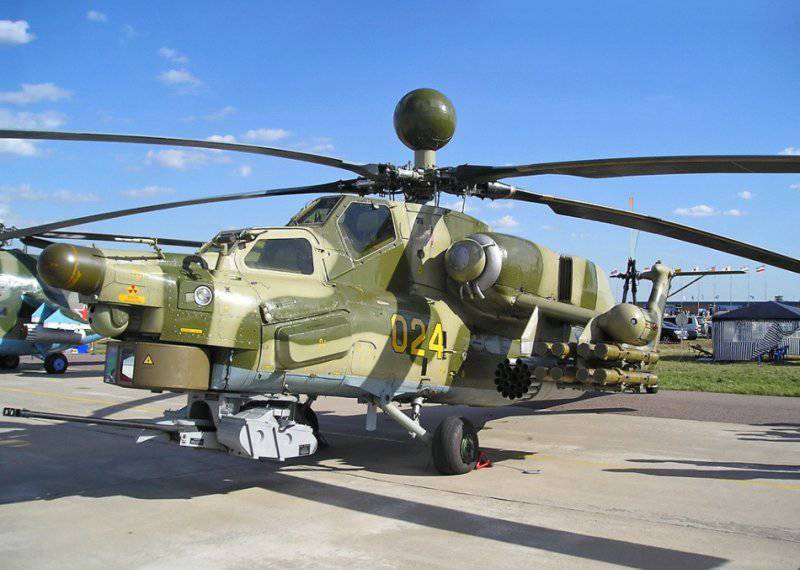 Mi-28N
Fully negotiations on the preparation of a contract for the supply of helicopters should be completed in the 2012 year, and the agreement itself will need to be signed in the current fiscal year, that is, before March 2013. India’s helicopter shipments will be launched 36 months after signing the contract and will have to be completed within 18-24 months. Based on this, if the contract is signed at the beginning of 2013 of the year, India will receive Apache no earlier than 2018 of the year.

It should be noted that the choice of the Indian side of the American car does not detract from the merits of the Russian Mi-28H helicopter. At present, Roeboronexport and the Federal Service for Military-Technical Cooperation (FS VTS) are receiving applications from abroad for the delivery of an export version of this attack helicopter, the Mi-28НЭ. The number of these applications began to increase, after the machine was recommended for adoption by the Russian army in October 2009. According to Anatoly Isaikin, director of Rosoboronexport, a Mi-28HE attack helicopter in the near future could significantly strengthen Russia's position on the global market for helicopters. According to the State Armaments Program calculated up to 2020, about 200 Mi-28Н helicopters will be delivered to the Russian Armed Forces. In 2012, the military should get 20 of such machines. In addition, Rostvertol is preparing to launch the Mi-28UB combat training model.

Helicopter AH-64D Longbow was created on the basis of the attack helicopter AH-64 and is equipped with a characteristic millimeter-wave nadvtulochnaya radar. Translated from the English Longbow means long-range bow. A distinctive feature of the AH-64D helicopter from its earlier counterparts are the larger compartments of electronic equipment (avionics) located along the sides of the lower fuselage, as well as the already mentioned round nadrotorny container with Longbow radar. That radar is a key feature of this machine.

Longbow millimeter-wave radar, whose cost is estimated at 2 million dollars, carries out work in 3-x modes: ground targets (NC), air targets (VTs) and terrain tracking mode (ORM). In the ground targets mode, the radar is able to display the sector in 45 degrees (left-right from the flight direction) on the crew displays. Within this area, the area of ​​which may be up to 54 square. km at a distance of 10 km. The radar is capable of automatically recognizing and qualifying up to 256 different targets. At the same time, he determines the type of targets: tracked or wheeled vehicles, helicopters, air defense weapons or enemy aircraft. 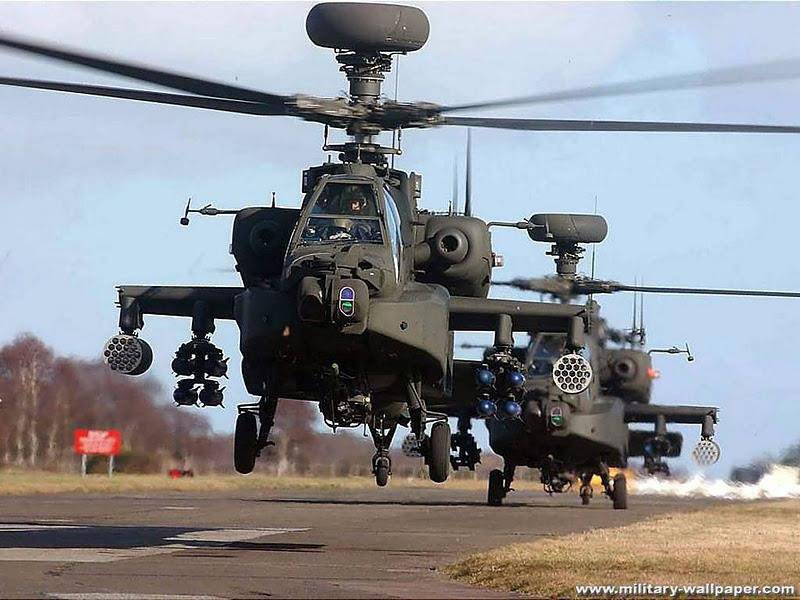 AH-64D Apache Longbow
The radio-frequency passive radar (interferometer) located directly under the radar is engaged in fixing radiating objects (ie, radar air defense systems). At the same time, the most dangerous targets are automatically selected (various types of anti-aircraft weapons) that appear on the display of the fire control system and are intended for primary destruction. In the ORM mode, the helicopter radar allows you to make a blind flight at extremely low altitude (in rain, fog, etc., when infrared means of observation are ineffective). In order not to "fill in" the screen with unnecessary information, only objects that are equal to or greater than the altitude are displayed on it. In CC mode, the radar has a circular view and is able to identify 3 types of targets: airplanes, helicopters and hovering helicopters. In this case, the pilot can combine the radar operation modes by simply switching the toggle switch. For example, when flying in ORM mode, it can search for ground targets.

The integrated fire control system (EMIS), in addition to the radar, includes the usual subsystems TADS, PNVS and FLIR. In case of bad weather conditions or outside the zone of visual contact, the radar is used for the purpose; weapons produced using the above laser and infrared tools. The AH-64D Longbow ISMO also provides new opportunities in the tactics of using a helicopter. For example, in the “capture target after launch” mode, it allows only one machine from the group to observe the targets and direct ATGMs at them, which the rest of the helicopters will launch from the shelters, being out of sight. Militery Technology magazine described the new EMIS as a qualitative leap in combat effectiveness: it increases helicopter survival by 7 times, and fire capabilities by 4 times, which consequently gives an increase in combat effectiveness 4х7 = 28 times.