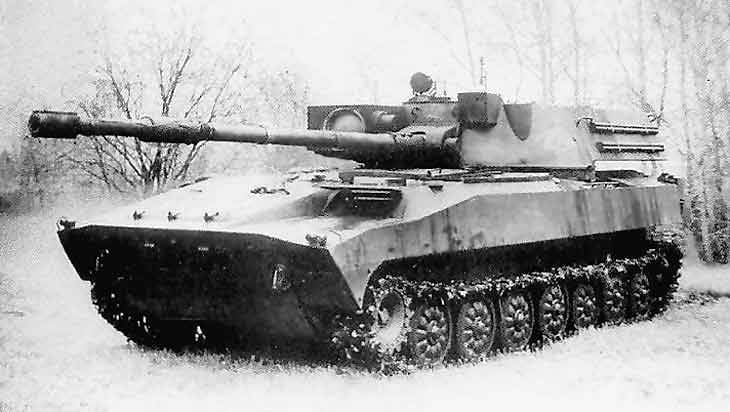 One of the experienced SPTP 2S15 is being tested. Photo Zonwar.ru

The combat qualities of any artillery system are determined by a number of different factors, incl. capabilities and parameters of sighting devices. Traditionally, aiming is carried out using optical systems, but other options are also possible with certain advantages. So, in the mid-seventies, the development of a self-propelled anti-tank gun (SPTP) equipped with a radar sight began in our country. This machine received the index 2S15 and the code "Norov".

Based on new principles

By the mid-seventies, there was a need to create new anti-tank self-propelled guns capable of fighting modern tanks probable enemy. The Main Missile and Artillery Directorate developed tactical and technical requirements for such a machine, which provided for several interesting ideas.

It was proposed to create a new SPTP on the basis of an existing armored vehicle with minimal processing. This made it possible to obtain high technical characteristics while simplifying operation. The combat vehicle should have been equipped with a 100 mm gun. To improve accuracy and accuracy, it was required to develop a fire control system with an optical and radar channel. The latter was supposed to ensure the detection of an armored object from a distance of 3 km, escort for 2 km and firing over the entire range of ranges.

In May 1976, the Military-Industrial Commission under the USSR Council of Ministers approved the requirements and launched the development of a new project, which received the code "Norov". The Yurginsky Machine-Building Plant was appointed the main contractor. The radar equipment was ordered from the Strela Design Bureau in Tula. The artillery system, according to some sources, was developed at the Central Research Institute "Burevestnik". 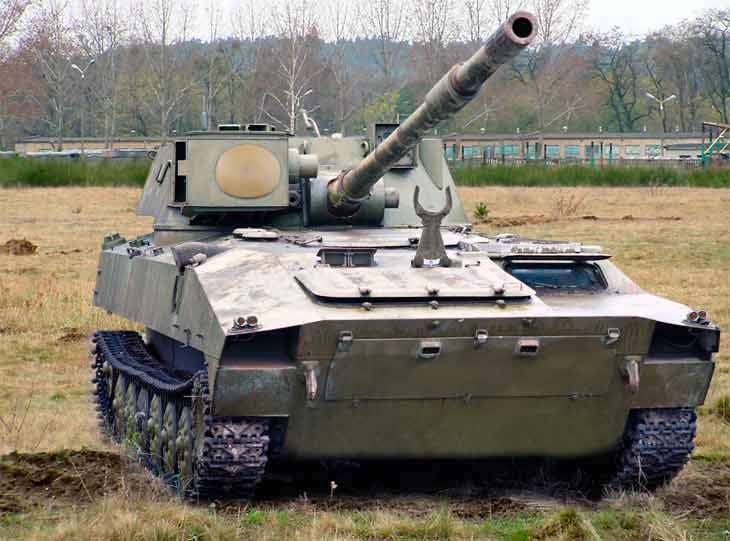 After years of storage in an open area. Photo Zonwar.ru
Several years were allotted for the development of the project: the start of state tests was scheduled for 1979. The design work was completed by the end of 1977, but after that difficulties arose. By decision of the Ministry of Radio Industry, prototypes were to be built at the Arsenal plant in Leningrad. For a number of reasons, the enterprise did not cope with this task, and the state tests had to be postponed to 1981. Then other co-executors had problems, which came to new transfers.

In accordance with TTT, the new combat vehicle was made on the basis of the 2S1 Gvozdika self-propelled howitzer. From the base sample, without significant changes, the body was borrowed with the internal units and the chassis. The existing tower underwent some revision, which was supposed to receive new weapons and instrumentation.

Thus, SPTP 2S15 "Norov" received a body made of rolled steel armor, which protects against bullets and shrapnel. A YaMZ-238N diesel engine with a power of 300 hp was placed in the bow of the hull. and a mechanical transmission with front-wheel drive. The chassis remained the same, with a seven-wheel torsion bar suspension. There was a control compartment next to the engine, and the entire feed of the hull was given to the fighting compartment.

A new smoothbore gun was developed for Norov, the basis for which was probably the 2A29 / MT-12 Rapier cannon. It differed from the towed gun by the presence of an ejector, but retained the characteristic muzzle brake and other units. The self-propelled gun could use unitary shots of existing types and did not have automatic loading. The exact characteristics of the gun for the 2S15 have not been published, but it can be assumed that the parameters are close to the Rapier. 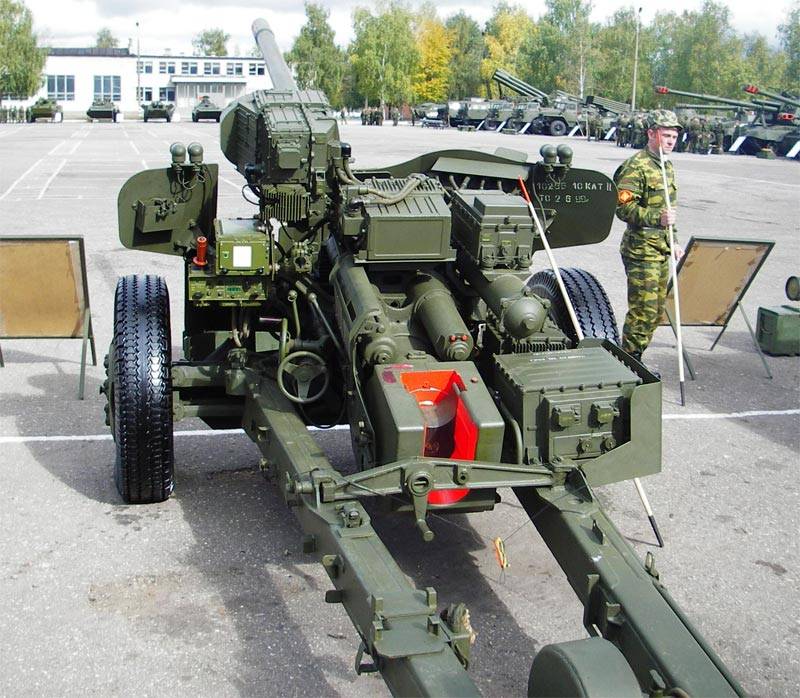 MT-12R cannon with 1A31 "Ruta" equipment. Photo Militaryrussia.ru
The main innovation of the project was the so-called. automatic radar fire control instrument complex (ARPKUO) with index 1A32. It was developed on the basis of the existing 1A31 Ruta complex for the 2A29 towed gun, which generally met the customer's requirements. The use of ready-made components made it possible to speed up the development process - the 1A32 project was completed in just a few months.

The new ARPKUO included an antenna device located on the frontal sheet of the turret to the right of the gun, as well as data processing and information output devices. With the help of the radar, "Norov" could detect and track targets at specified ranges. It also provided the calculation of data for aiming guns with the highest possible accuracy.

The dimensions and weight of the promising 2S15 SPTP remained at the level of the 2S1 base ACS. The same applied to the calculated running characteristics. The self-propelled gun retained the ability to move over rough terrain with overcoming obstacles, and also remained floating.

According to the original plans, state tests of a new type of self-propelled gun were to begin in 1979. Due to production problems, the tests were postponed for two years to the right. Then new difficulties appeared for other participants in the project, and three experienced Norovs were able to be sent to the landfill only in 1983. State tests lasted about two years and ended with ambiguous results.

The finished chassis, well mastered in production and operation, provided the required level of protection and mobility. The characteristics of the gun, made on the basis of the existing model, were also, in general, predictable. ARPKUO, also made on the basis of a finished waste product, should not have encountered difficulties. 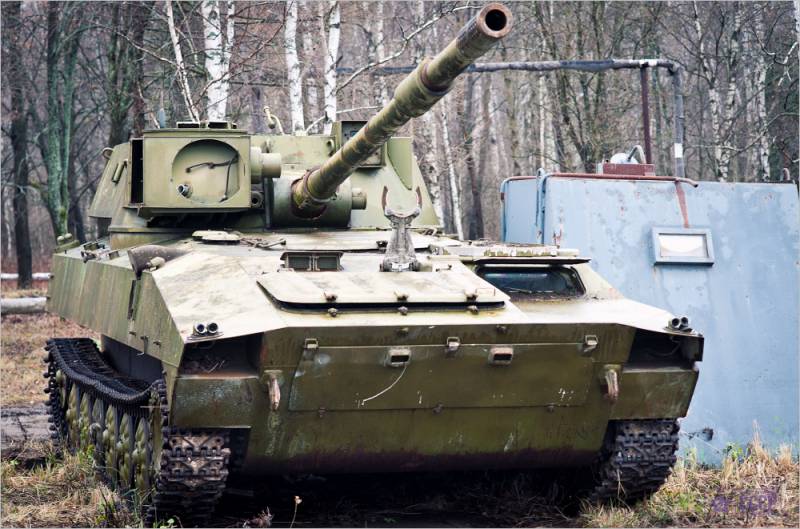 During the years of inactivity, the prototype lost part of the equipment, 2012 Photo Onepamop.livejournal.com
Tests of three experienced 2S15 Norov were completed in 1985 without any recommendation for adoption and production launch. By this time, tanks of the new 3rd generation with enhanced combined frontal projection appeared in the armies of the potential enemy. According to the estimates of the Soviet military, our 100-mm smoothbore guns could no longer effectively engage such targets. Accordingly, "Norov" in its current form was not of interest to the army. At the end of 1985, the project was closed.

Experienced equipment was partially dismantled and sent for storage. One of the prototypes for a long time was in the open area at the Central Research Institute "Burevestnik". Last year, it was restored and included in the permanent exhibition in the Nizhny Novgorod Victory Park. During the restoration, the experienced Norov was repainted and returned to its former luster, but lost its most recognizable detail - the radar casing.

The SPTP 2S15 "Norov" was not brought into service, but this does not interfere with evaluating the project and its main ideas. At the same time, the main attention should be paid to a fundamentally new element for self-propelled artillery - ARPKUO 1A32, designed to determine the combat qualities of a new armored vehicle.

Optical sighting devices are known to face certain limitations. A number of factors such as night, rainfall, dust or smoke can make them difficult to use and negatively affect the accuracy of the fire. In addition, such a sight for accurate shooting needs the help of a rangefinder, optical or laser. 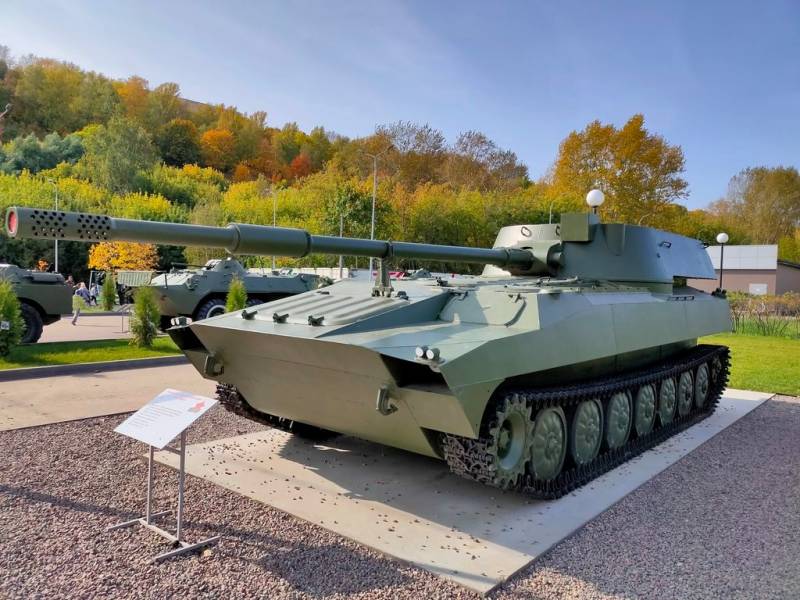 2С15 after restoration in Victory Park, Nizhny Novgorod. Photo Twitter.com/Ninja998998
The 1A32 type radar system is not negatively affected by precipitation or darkness, due to which the self-propelled gun becomes all-weather and all-day. In addition, the locator is capable of determining both the direction to the target and the distance to it with high accuracy. With the help of a ballistic computer, this information can be turned into data for precise aiming of the weapon.

ARPKUO and optical means can be used simultaneously, complementing each other and eliminating the need for other systems. The experience of some projects of modern military equipment confirms the high potential of this combination.

However, the radar fire control system is not without its drawbacks. So, the product 1A32 on "Norov" was supposed to have low survivability. The antenna device of the complex was quite large, was located within the frontal projection and did not have any protection. Accordingly, any bullet or splinter could disable ARPKUO, leaving only the optics to the crew of the vehicle.

Another threat to the radar and the SPTP was the enemy's electronic warfare. In addition, a constantly working transmitter could make a self-propelled gun a target for a controlled weapons with a passive radar homing head.

Thanks to the radar system, the new 2S15 self-propelled gun was supposed to show improved combat qualities. At the same time, the tool used no longer met the requirements of the time, which determined the prospects for the project as a whole. However, it is known about the development of new ARPKUO for use on promising tanks and equipment of other classes.

Soon after the completion of work on Norov, well-known events began, which seriously affected the further development of armored vehicles and the introduction of new solutions. The idea of ​​placing the locator on a self-propelled gun was abandoned for a long time. It was possible to return to it only in the recent past, within the framework of the "Coalition-SV" project. However, in this case, the radar is used to measure the speed of the projectile, and not to search for targets. Perhaps, in the future, there will be full-fledged combined sighting systems based on optics and radar. But so far the only domestic self-propelled gun with such equipment remains the 2S15 Norov.