"Often the factory drawing and the real machine have a tangible difference." 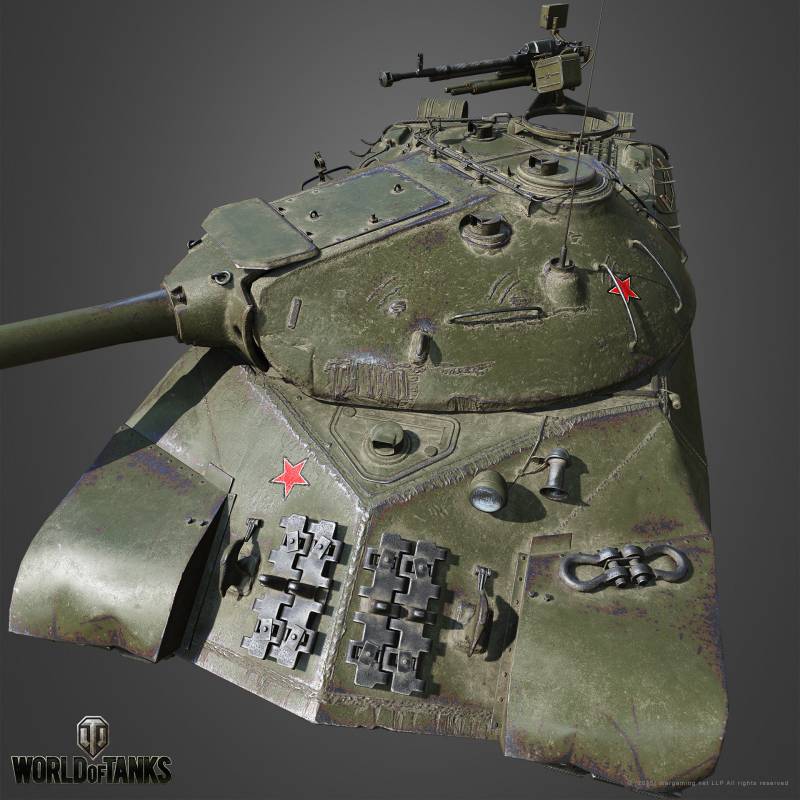 Continuation of the interview with World of Tanks artist-supervisor Mikhail Ritvinsky about how photorealistic models of military equipment are created in the game. The first part of the article can be read here.


- Photogrammetry affects the angles of inclination of armor, shape tank - and therefore on the gameplay. Please tell us more about this.
- An important aspect, with which photogrammetry helps us a lot, is the reconstruction of complex cast shapes. This is especially important for Soviet tanks. For example, one of the very first tanks that we have created using photogrammetry is the Soviet IS-3.

Initially, we made his model in the classic way - based on the drawing. But the drawings are very imperfect - we do not even always have access to them, and in those that we manage to get, there is not enough information about the shape of the tower, some projections and sections. And the shape of the cast tower is actually very complex. In addition, often the factory drawing and the real car have a tangible difference. Therefore, we came to the Stalin Line, where there are two IS-3s, and scanned them.

The experience of scanning the IS-3 on the Stalin Line showed us that tanks manufactured at different factories can have noticeable differences both in the angles of inclination of the frontal armor and in the shapes of the cast turrets. When we compared both models - according to drawings and photogrammetry - we noticed a rather significant difference, it became a discovery for us.

At World of Tanks, we do not make deliberate tolerances for the corners of the armor. The angles of the armor are respected as much as possible in accordance with the factory data or photogrammetry data.

The shape of the towers, especially the cast ones, greatly affects the gameplay - and in reality, it largely determines the protection of the crew. If it is wrong to make some kind of trick of the sight or antenna, then this can lead to the fact that it is there that there will be the weakest point on the armor. Any shape difference will critically affect the given armor thicknesses. More degrees, less degrees on the given armor - this immediately adds a plus centimeter to penetration. Therefore, you need to do everything right.

- And in which tank models is photogrammetry used the most?
- The most voluminous in terms of photogrammetry is the IS-3, which I have already mentioned. This was the first sign of this process, and on it we gave our 100 percent. It was almost 6 years ago. By the way, Maus was also photographed in Kubinka. It would seem, well, Maus, a primitive coffin without details, it seems to be strong and you will not be mistaken in the dimensions, angles, slopes of the slabs. But, if you examine him carefully in Kubinka, then, for example, he has a rather complex mask, which has interesting cuts, polishing, a very specific shape, not at all primitive. Maus, we were able to work out in more detail and accurately both with historical point of view, and from the artistic. For example, his armor plate joints have a deepening, and we did not do this in the very first version, because the photographs did not convey this much, and even more so the drawings. But on the photographic scan we saw all these nuances, indentations, cuts, polishing perfectly.

In general, most of our tanks are made in the classical way according to the drawings - this is due to the fact that the number of cars that are in the metal, and in the exact configuration in which we need, is negligible. We have more than 600 tanks in the game, and even if you count the number of copies in the same museums, this is ten times less. If we talk about entirely photoscanned cars, there are several dozen of these cars in the game. Nevertheless, they allowed us to work better and more accurately with the drawings, to better understand how the tanks were made and how they were cast, how artistically Soviet tanks differ from American and French ones.

And, of course, auxiliary materials obtained by photogrammetry are also of great importance. It is not enough to model a tank according to the drawing, this is just the tip of the iceberg. Then you need to apply all the textures to it, depict how rolled armor looks like on a tank, cast armor, welding of various types, cuts of armor plates.

- What are the largest and smallest objects transferred to the game using photogrammetry?
- Here, by the way, it is interesting, because scanning a small and a large object are two completely different tasks, each with its own difficulties. The largest object is a huge mountain. We scanned rocks in France and we use them on a number of maps. We photograph large mountains with a drone, and here there are nuances that affect the quality: suitable weather, strong or weak wind, the nuances of the shooting itself, so that the drone is stable in the air and is not very blown away, then a better result. We also use drones for tanks, oddly enough. There is a whole combination: we photograph tanks with different cameras, each for its own task.

And the smallest object is generally an interesting story. We had a Halloween event last year where we were creating a fantastic alternate reality. According to the plot, a man-made disaster occurred in the city and caused paranormal phenomena. The city was flooded with black slurry - a substance that is very similar to oil, and huge black crystal-like stones stuck out everywhere. An interesting story is connected with their creation. The task was to do something unusual, surreal. We made some concepts, sketches of how it might look. I got the idea to create these stones using photogrammetry, and I noticed that they generally look like bitumen. When you cool it strongly and break it into small pieces, you get very interesting stones, very similar to obsidian, with characteristic chopped shapes. I bought a small bag of this bitumen in the store, cooled it, and split it into small pieces, literally 5 by 5 cm in size. 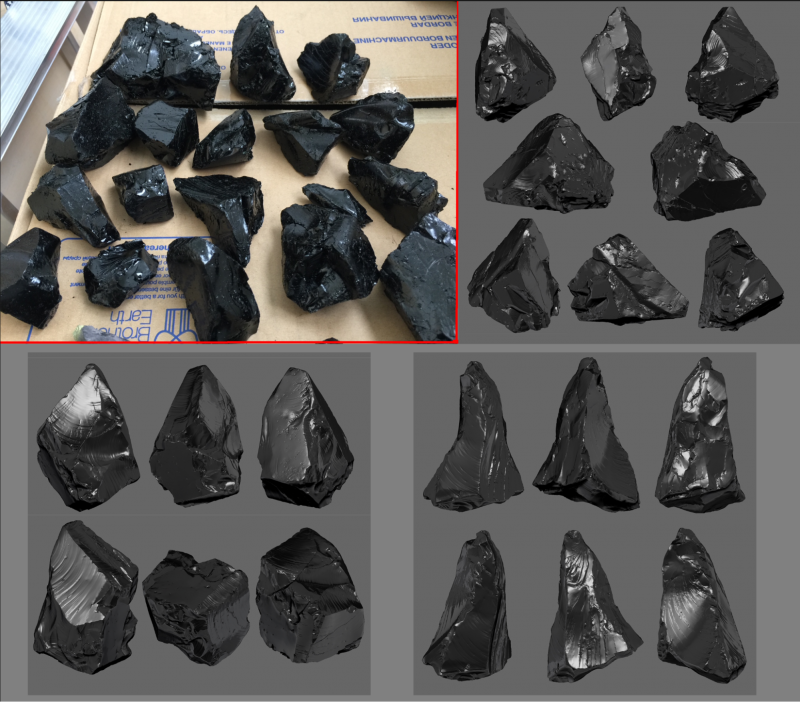 The difficulty was that photogrammetry has a number of limitations. For example, it is impossible to scan glossy objects because they glare and the algorithm has nothing to attach to. The object should be matte, with a texture, then the program will understand how its shape changes from the perspective. So: I chopped the bitumen, took a few fragments that I liked, covered them with colored powder to create some kind of matte texture on them, and then with the help of a macro lens I photographed it in the best possible quality. 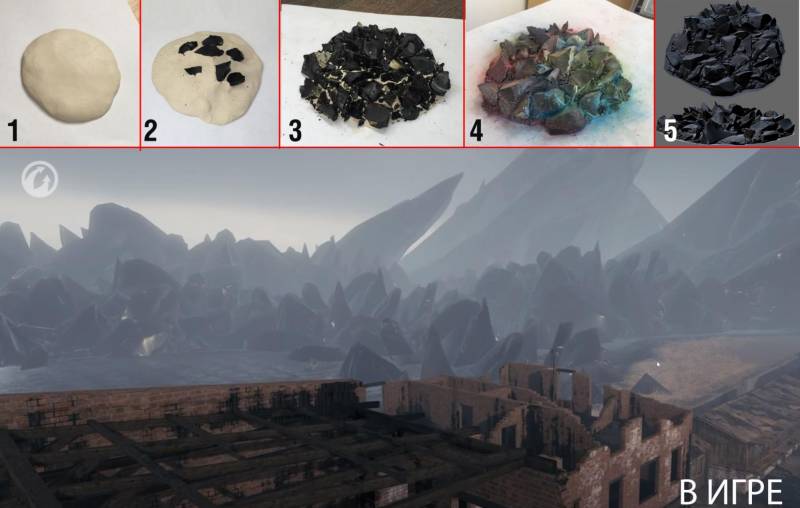 The process turned out to be quite time-consuming, it took me almost 2000 photos for one stone, but in the end I got a very high-quality scan, which we used in the game as an alien crystal. By the way, it is worth noting that in the game all crystals are gigantic in size, unlike their originals, which are quite small in life.

- What do you think, will the photogrammetry technology develop further?
- It is already being used in games with might and main, special libraries and companies have appeared that are engaged in this process and build their business on this. There is a library called Quixel Megascans, which is now used by all game and VFX studios that make games or films with photorealistic graphics. And there is a huge library of scans there. The technology is used both in cinema and in architectural visualization - the scope of application is quite wide. 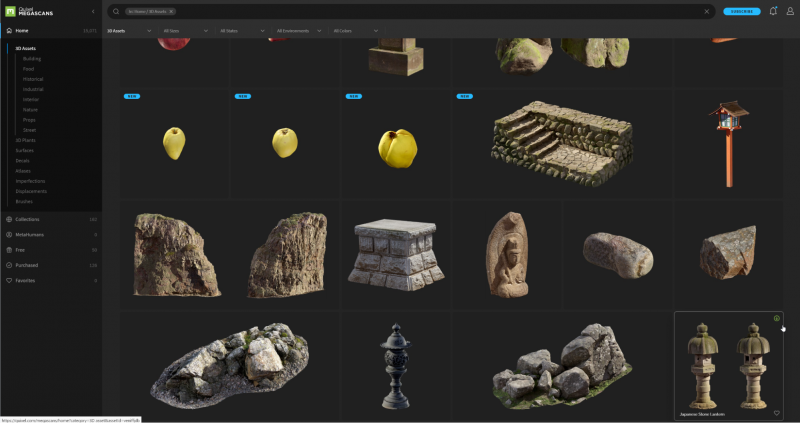 Now, for example, in games where there are human characters, they try to create people using photogrammetry. This is especially important if there is not some abstract character in the game, but a famous actor. To draw it by hand, you need a very high level of skill of the artist. Or you can scan it!

But photogrammetry will not be able to replace manual labor by 100 percent, because games are still hostage to their setting, and not always the chosen setting can be scanned from life. For example, games that take place in a fictional world or in the very distant past. Well, or games in a cartoon style. Photogrammetry primarily helps those who set the bar for realistic visual style. There is no way without her.