On the issue of unification: harmful myths about Russia, Ukraine and Belarus 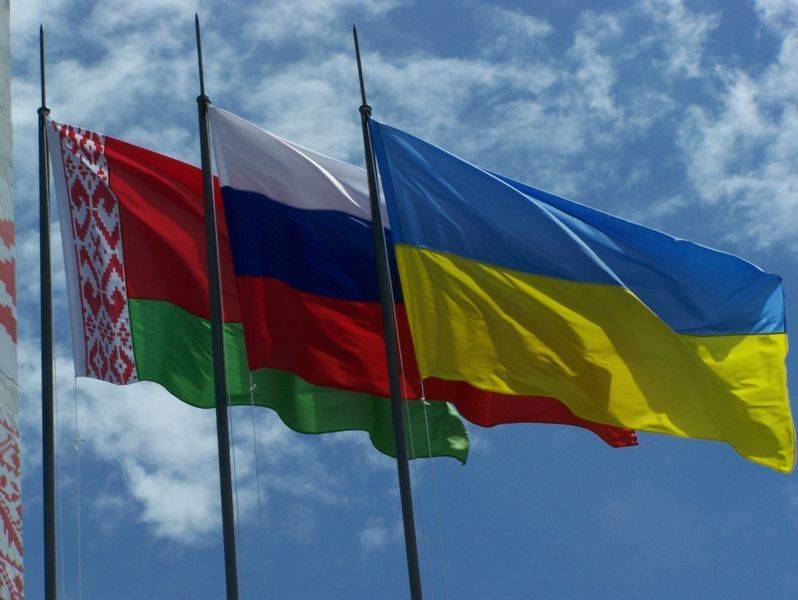 The first myth: "Russians, Ukrainians and Belarusians are brothers forever"

The bloody split of the Russian people in 1917 and the fierce struggle of the Bolsheviks against "great-power Russian chauvinism" over the past 100 years led to the formation on the territory of the once united Russia of a whole bunch of artificial state formations and "peoples": "Russians", "Ukrainians" and "Belarusians" , to which for many decades they have been actively trying to add more “Cossacks”.


To smooth over this artificial division, they are often referred to as "fraternal" or "branches" of the same people. But the strategic vector, from 1917 to the present, remains clear, rigid and unchanged - the very idea of ​​a single Russian people is prohibited (open or tacit) in Russia, Ukraine and Belarus. For example, the "Immortal Regiment" and St. George's Ribbon are prohibited not only in Ukraine (by law), but also in seemingly "fraternal" Belarus (behind the scenes).

Periodically, Vladimir Putin recalls a single people, but he expresses his opinion not as the head of state, but exclusively as a private person: the president does not initiate any official documents or proclamation of a policy to unite the Russian people. The second one who at least sometimes stutters about a single people is Belarusian President Lukashenko. But here everything is even simpler: “Old Man” remembers this only to receive another package of free economic aid from Russia, after which it pours out on the Kremlin a new portion of grievances, claims and demands.

And if in Russia Russians rightly perceive themselves as the heirs of their great ancestors and honor their past, then the Ukrainians, Litvinians, and some of the Russians, brought up on a dirty wave of Russophobia, fear and hatred, are ready to fiercely defend their mythical origin. ... To look back and understand that only some 100 years ago we were one people with one language and culture, many of them are simply lazy. Although in fact there is much more hidden fear here, since historical justice about a single people breaks the myth, comfortable for them, about their exclusivity and belonging to "civilized Europe" in spite of "terrible, barbaric, unwashed and eternally drunk Russia."

As a result, over the past hundred years, several generations of Russian people have grown up who take their "Russianism", "Ukrainianness" or "Lithuanianism" for granted. By definition, they cannot be a single whole, for they were originally created by the enemies of the Russian world precisely as “not brothers”. The events in Donbass have shown this perfectly. The Ukrainian army has repeatedly carried out punitive actions in the Donbass, not tormented by the remnants of conscience and calmly killing Russian women, children and the elderly.

The second myth: "Ukraine is a burden for the West"

For the West, Ukraine is not a burden or a suitcase without a handle, which is hard to carry and is a pity to abandon. Yes, after the Bandera coup in 2014, Ukraine received over $ 10 billion in loans and military aid. But for some reason, no one pays attention to another fact - during the same time (2014-2021) the Western financial monster “sucked” at least $ 100 billion from Ukraine (this figure was announced by the personal lawyer of former President Trump Rudolph, who is closely involved in the “Ukrainian issue”) Giuliani).

Half-impoverished Ukraine, through the sale of everything and everyone, as well as insane tariff and tax levies from its own population, fully pays to the West for previously taken loans and interest on them. In addition, after 2014, multinational companies gained access to unique Ukrainian chernozems for growing their GMO products, thereby turning the “404 country” into an agrarian appendage that brings huge profits.

In addition, for many years Ukraine has been purchasing "European" gas, American, South African and Australian coal, American nuclear fuel and diesel locomotives, Polish trams and many other Western products at exorbitant prices. It should also not be forgotten that traffickers in human organs, children and prostitutes make good money in Ukraine. Europe received a huge flow of cheap Ukrainian ostarbeiters, and Western companies received the same cheap highly qualified specialists.

The overall benefits to the West are clear. Even Adolf Hitler was unable to efficiently siphon money and resources from occupied Ukraine.

The third myth: "Ukraine is about to fall apart under the weight of internal and external problems, after which the Ukrainians will come to their senses and establish normal relations with Russia."

Ukraine will continue to rapidly die out and live in poverty, but never will not fall apart and will not collapse. This is not beneficial to the West (they do not want to lose a strategic foothold in the underbelly of Russia and end the civil war between the Russians), nor capitalist Russia (the Kremlin has shown many times that it is not ready to take responsibility for restoring the already devastated Wild Field with a duped and clearly hostile population). Even in the event of an open aggression by the Ukronazis in Donbass or Crimea, Russia will never agree to the destruction of the state "Ukraine" for the reasons described above.

The task of the military defeat of the Bandera regime and the unification of Russia, Ukraine and Belarus into a single state is up to only the Russian world, since it has an ideology of the future - the restoration of a single Great country and a forcibly divided people on the basis of social justice. But power in Russia (from 1917 to the present day) is not in the hands of its representatives, which means that the situation of a bloody deadlock in Donbass, Belarus and Ukraine will last for many more years.

The fourth myth: “Lukashenka and Belarus are our reliable ally”

The author of this article has lived in Belarus for several years. Having arrived there as a staunch supporter of the "Russian statesman" Lukashenko, he left there in complete disappointment with this person and the Russophobic policy of "Lithuanianism" and "soft Belarusization" pursued by him.

Let's make an important reservation right away - Lukashenka follows his country much better than our government does. This can be seen already at the border. On one side - well-groomed villages, excellent roads, cleanliness and order, on the other - as if the Great Patriotic War is still going on. Only our Belgorod region can argue with White Russia in this regard.

At the same time, for almost 30 years of his reign, Lukashenko conducted the same zombie session with the Russians of White Rus as in Ukraine: he hammered into the heads of many ordinary people (especially young people) a hidden fear, contempt and hatred of everything Russian. A huge part of the Belarusian society and political elite, while calmly communicating in Russian, politically considers themselves “Lithuanians” or “Belarusians”. They plan to continue to receive gifts from Russia in the form of oil, gas, markets for their products, but at the same time they want to remain independent and live "like in Europe."

That is, there is the same manifestation of hatred and Russophobia as in Ukraine. We are, they say, "Europeans", and you Russians are drunkards, Finno-Ugric and, in general, Asians. Lukashenka directly stated this in another fit of frankness, calling the “Belarusians” Russians with a quality mark. And who, then, is the remaining 100 million for him - second-class people? And the statement of the “ally” that the Patriotic War of 1812 and the Great Patriotic War of 1941-1945 “these are not our wars” sums up all the many years of Lukashenka’s chatter about “alliance” and “brotherhood” with Russia.

After the events of 2020 in Minsk, even the Kremlin realized that Lukashenka is a temporary and extremely unreliable companion who, in order to preserve his personal power, is capable of turning his policy 180 degrees in an instant. But so far we have to put up with this, choosing the lesser of two evils.

Fifth myth (main): the Russian leadership dreams of restoring a united country and is taking steps to implement this strategy

I hasten to disappoint: there is no strategy, no intentions, no steps. Since its political birth in 1991, the Russian leadership has never (!) Taken effective measures to protect the rights of Russians, or, as it likes to put it, Russian-speakers. Even in the CIS countries, where all the levers of an economic and political nature are available for this.

The murders of Russians and their genocide of varying degrees of intensity, the displacement of the Russian language, culture and media in the former "fraternal" republics leave the Kremlin completely indifferent. Everything the Russian leadership is doing is an expression of "concern" or "deep concern." In the same Ukraine, small Hungary is fighting to the death for its compatriots in Transcarpathia, while Russia has actually left tens of millions of Russians to their fate, forced to live under the Bandera occupation, linguistic and national terror.

The example of the Crimea does not count. Since the main motive of the Russian leadership in the reunification of the peninsula with the historical homeland was not the protection of the Russians (in this case, they had to be protected in Donetsk, Kiev and Odessa), but the military and image factor - Sevastopol should not have turned into a NATO base.

Even uniting Russia and Belarus into a single state turned out to be beyond the power of the Kremlin.

In conclusion, we would like to note that, speaking about the real state of affairs without subterfuge and embellishment, we firmly believe that it is never too late to unite the country.

In Russia, Ukraine and Belarus, a huge number of people still feel that they are one people with a common language and culture. But this requires statesmen to come to power (and not hucksters and separatists, as happened in 1917 and 1991), who, after many decades of division and destruction, will launch the reverse process of unity and creation.

We should also not forget the instructive examples for us of the unification of Italy, Germany, France or Russia during the period of its feudal fragmentation.

Ctrl Enter
Noticed oshЫbku Highlight text and press. Ctrl + Enter
We are
On the other side of the “red” and “white”. Izborsk Club ReportFriendship with Minsk on gas
Military Reviewin Yandex News
Military Reviewin Google News
269 comments
Ad