The armor is strong. Technical features of armor protection T-34

In the early days of World War II, Soviet T-34 medium tanks came as an unpleasant surprise for the enemy. The main tank and anti-tank guns of the German army could not effectively hit such equipment from real ranges, and this state of affairs persisted for a fairly long time. It was possible to provide such a high level of protection for the T-34 tank due to the competent and successful combination of well-known and new ideas, materials and technologies.

At an angle to the vertical

In a number of projects of the thirties, Soviet tank builders worked out the idea of ​​the so-called. rational booking angles. The installation of hull parts at angles and the use of curved turret elements made it possible to increase the level of protection with a limited increase in the thickness and weight of the armor. All variants of a promising tank, developed by the Kharkov KB-24 before the future T-34, received just such a reservation.

Project T-34 mod. 1940, according to which serial production was being established, provided for the use of sufficiently thick armor installed at significant angles. The hull forehead was made of two rolled sheets 45 mm thick; the upper one was installed at an inclination of 60 ° to the vertical, the lower one - 53 °. The upper part of the sides was a 40 mm thick piece, inclined by 40 °. The lower part of the bead was vertical and had a thickness of 45 mm. The roof of the hull was 16 mm thick; bottom - 13 and 16 mm in different areas. 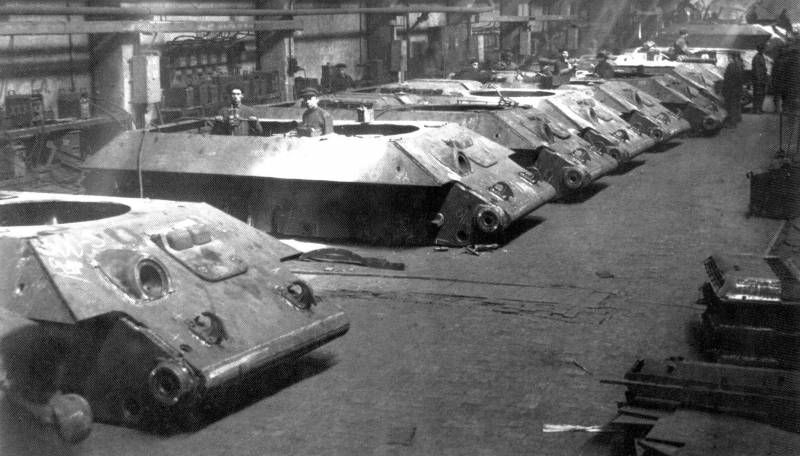 Assembly of hulls at a plant in Nizhny Tagil, 1942. Photo by Waralbum.ru
It is easy to calculate that the horizontal-reduced thickness of the upper frontal part reached 90 mm, and the lower - 75 mm. A similar parameter of the inclined side of the side exceeded 52 mm.

The first version of the turret for the T-34 was welded and consisted of several rolled parts. He received a complex-shaped frontal unit 45 mm thick. The sides and sterns had the same thickness, installed with an inclination of up to 30 °. Provided for a 40-mm gun mantlet. Later, a cast tower was created. Due to the differences between rolled and cast armor, the wall thickness increased to 52 mm. From above, all the options for the caps were covered with a 15-mm roof.

Thus, at the time of its appearance, the T-34 had a fairly thick armor and in this respect was second only to heavy tanks of domestic design. At the same time, it was possible to obtain the minimum mass of the structure. So, the hull of the experienced A-34 weighed approx. 10,4 tons, of which 7,92 tons were armor. The tower protection had a mass of less than 1,7 tons with a total mass of the tower of over 3,15 tons. 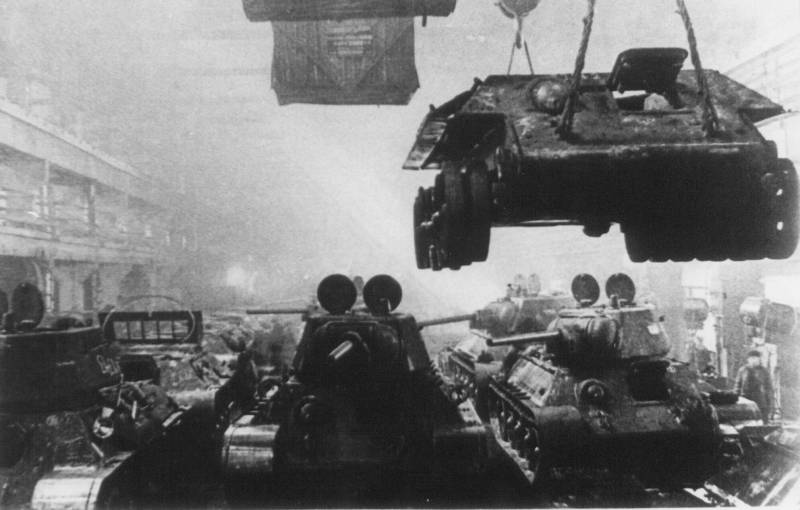 In 1939, the Mariupol plant named after V.I. Ilyich, who was to make armor parts. At that time, the enterprise produced bulletproof armor, while anti-cannon alloys were absent in the range. For the joint development of a new material, a group of specialists from the Leningrad Research Armored Institute No. 34 arrived at the plant.

Two sets of armor for the construction of experimental tanks were ready in November 1939, but work on a new type for production vehicles continued. In January of the following year, preliminary work on the armor was completed, which received the designation MZ-2 ("Mariupol plant, second"). Then they carried out six experimental heats, during which they prepared 49 armored parts of different compositions for subsequent tests. These products had a thickness of 25 to 50 mm in increments of 5 mm.

In Mariupol, tests were carried out with shelling from 37- and 45-mm guns. Armor of all thicknesses showed acceptable characteristics of resistance to various projectiles. Then some of the armor plates were sent to the Izhora plant for testing by firing a 76-mm cannon. All six samples split when hit by a projectile, and there was also a spalling of fragments from the back. 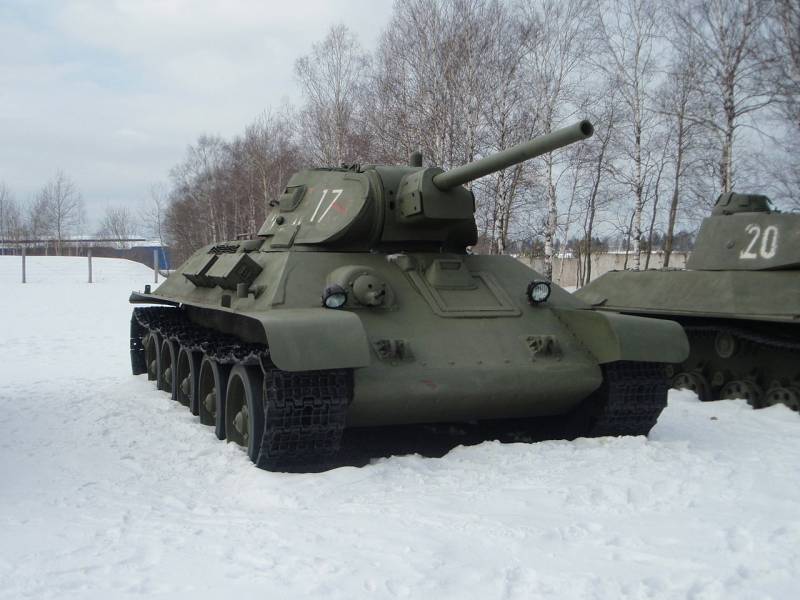 Museum T-34, built in 1941. The tower of the machine is welded from rolled parts. Photo Wikimedia Commons
Based on the test results, the developers received a recommendation to increase the viscosity of the armor. In addition, the customer revised the requirements, and an improved version of the MZ-2 was recommended for production. They began to melt the gross armor already in April 1940, and by the end of the month the first batch of 10 sets of armor parts for the T-34 was sent to Kharkov. At that time, the armor bore the new name I-8S. Later, the "experimental" letter "I" was removed.

Initially, 8C armor was produced only in Mariupol. Later, in parallel with the development of the production of T-34 at new sites, melting began at other enterprises, in Magnitogorsk, Kuznetsk and other cities. In 1941, after the loss of Mariupol and Kharkov, this made it possible to maintain the production of tanks and further increase it.

As production continued, the design of the T-34 tank and individual units changed several times. Some of these innovations were aimed at improving the tactical and technical characteristics, while others were introduced to simplify, accelerate and reduce the cost of mass production. In addition, the specificity of serial production at different enterprises affected. In particular, this led to minor deviations in the thickness of the armor of different batches. 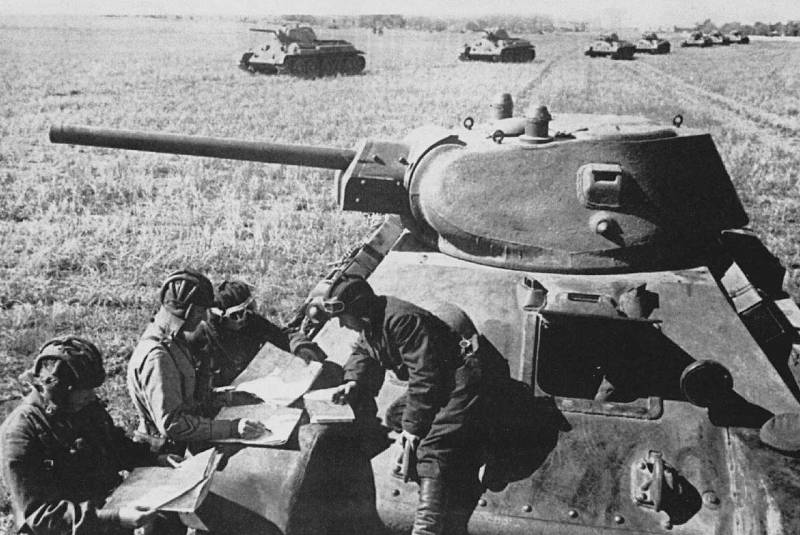 Tank with a cast turret, 1942 Photo Wikimedia Commons
The strength of the hull protection as a whole has not changed or been revised. Only in 1943 were measures taken to strengthen the front of the bottom (from 16 to 20 mm) and a new upper aft part appeared - 45 mm instead of 40 mm. The rest of the body parts have not undergone significant modifications. At the same time, tanks from different factories could differ in the way they were connected. For example, most of the bodies were butt-welded, but products with a tenon connection are known.

Until the end of 1941, tank turrets were assembled only from rolled parts. Then NII-48 developed a casting technology for towers of an updated design with the required protection characteristics. The forehead, sides and stern were made in the form of a single piece, into which the roof was then welded. The first batches of tanks with such units were sent to the Red Army at the beginning of 1942.

In 1942, the technology of stamping a tower from a 45-mm armor plate appeared. It was mastered only by the Ural Heavy Engineering Plant, and it was not a priority. In total, they released approx. 2 thousand stamped towers. 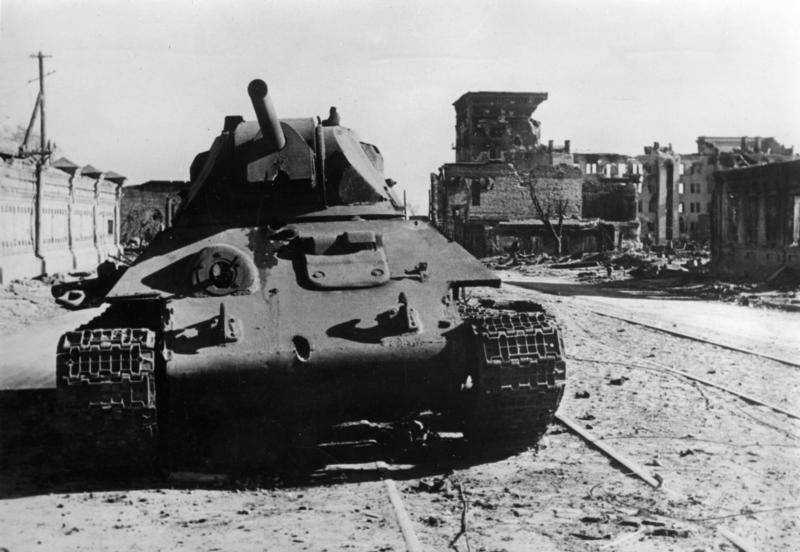 Padded T-34 on Stalingrad Street, 1942. Holes in the mask and at the junction of the frontal parts are visible. Probably, the enemy used a gun with a caliber of at least 50 mm. Photo of the Bundesarchive of the Federal Republic of Germany
In the course of creating a new modification of the T-34-85 tank, a new turret of increased size was created, capable of accommodating a larger caliber gun and three tankers. It was made of several cast parts, joined by welding. Frontal thickness increased to 90 mm; sides - up to 75 mm, stern - 52 mm. A 40mm mask was also used.

At the time of its appearance, the T-34 was one of the most protected tanks in the world and in this respect surpassed all existing medium tanks. Combined with other features and characteristics, armor up to 40-45 mm thick with significant tilt angles made the T-34 one of the best combat vehicles of its time. High combat qualities were confirmed already in the summer of 1941, when Soviet tanks first encountered a real enemy.

During the fighting, it was found that the main anti-tank weapons in Germany could not cope with the T-34 armor. PaK 35/36 cannons of 37 mm caliber could penetrate only the thinnest parts, and from a range of no more than a few hundred meters. Short-barreled tank guns showed similar results. A certain threat to our tanks was posed by 50-mm systems in towed and tank versions, and the most dangerous enemy was 88-mm anti-aircraft guns. 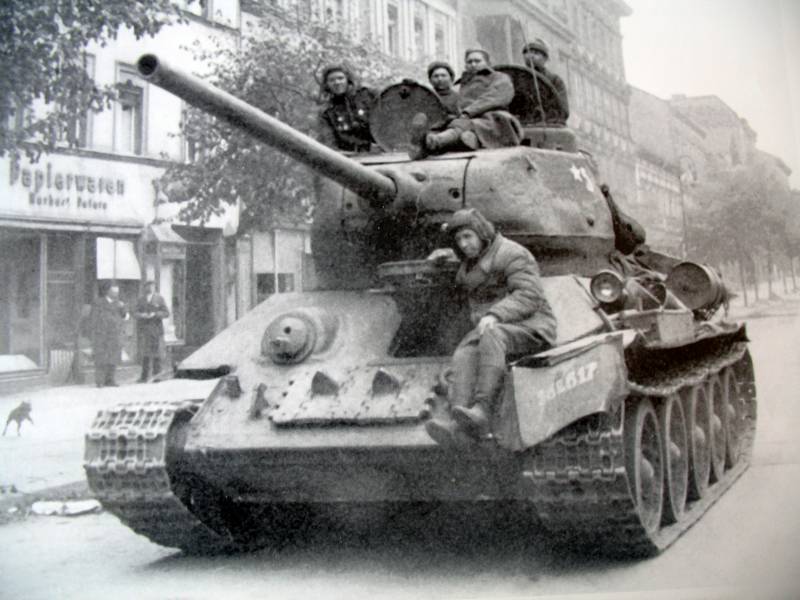 T-34-85 with a welded turret in Berlin, May 1945. Photo by Waralbum.ru
It can be argued that the booking of the Soviet T-34 was one of the main factors that influenced the development of German artillery and armored weapons after 1941. Noticeable results of this appeared in 1943, when a new generation of guns, tanks and self-propelled guns appeared on German positions. Unlike their predecessors, they could hit the T-34 from real distances.

However, after that, Soviet tanks did not lose their potential. The competent use of technology ensured the realization of all its advantages and the reduction of disadvantages. Then a major modernization was carried out, as a result of which the fighting qualities of the equipment increased significantly. This made it possible to keep the T-34 in service and in production until the end of the war and get the desired results.

Thus, at the turn of the thirties and forties, tank builders and metallurgists managed to create a successful design of armor protection for a promising medium tank. She showed the required characteristics and surpassed the current threats, and in addition, it was suitable for mass production at several factories and for operation in tank units. Over time, the potential of such armor diminished, and it no longer protected against all expected threats. But even after that, the T-34 tanks, having undergone a new modernization, retained their high combat capability and made a significant contribution to future victory.