7 May 2021
32
Over the past 20-30 years, graphics in computer games have come a long way from pixel icons that schematically indicate a character to photorealistic images that are hardly distinguishable from reality. Some series historical games is the only opportunity to study rare weapons and examine in detail combat vehicles that exist in only a few copies in historical museums. Photogrammetry technology, which is now very widely used in the gaming industry, helps developers to obtain realistic models.


We talked with World of Tanks artist-supervisor Mikhail Ritvinsky and asked him about how historically accurate models are added to World of Tanks tanks and realistic maps.

- Let's start with the very first concept that we would like to talk about today. What is photogrammetry?
- This is such a scientific and technical discipline, it was invented long before digital technologies and computers appeared: earlier it was used primarily in cartography. But for us, developers of computer games or artists of computer graphics, this is a technology for digitizing objects in the real world based on a large number of photographs of this object. 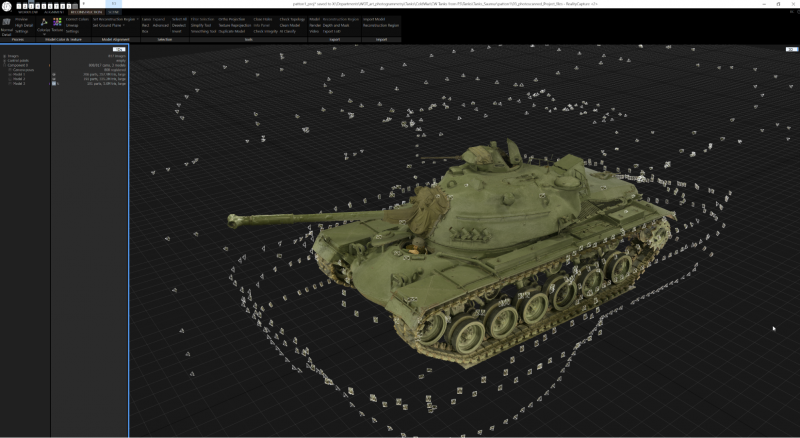 A simple example - there is a certain game location in the game and I need to place a stone on it. I can draw it with my own hands, in special 3D packages, and spend a lot of time on it. And with the help of photogrammetry, I can scan a stone I like in a forest, park, anywhere else, and I will spend noticeably less effort on the full cycle of its creation, plus the visual final result will be much more photorealistic. This happens due to the fact that when creating objects manually, we only imitate a real object and miss some important details - reality is too complex and diverse.
- What technical means are used in photogrammetry? Maybe you need some special cameras or sophisticated devices?
- The principle itself comes from the name: photogrammetry is, first of all, a story about photography. The principle of operation is quite simple: a specific object or area of ​​a certain landscape is photographed from all possible angles. It turns out a large set of photographs. This set is sent to a special program that automatically reconstructs the object. The output is a digital detailed copy of the object of interest. Directly in order to collect an array of photographs, as a rule, you need a camera, and in fact, any - up to a mobile phone. And a program for calculating this final model. There are many different solutions on the market: Agisoft Metashape, Reality Capture, Pix4d or others.
- A photo is an image on a plane, and the output is a 3D model, how does this happen?
- This is the magic of this algorithm. The program analyzes the difference between different photographs, it finds similar or identical areas on them, calculates the difference between them in order to understand what was the displacement between different angles, and then, based on algorithms for calculating the depth map, triangulation and other techniques well-known to mathematicians, the construction takes place 3D models.
- What objects are photogrammetric in World of Tanks?
- There are several categories: The first is landscape textures. Almost all textures on our maps are made using photogrammetry. These are various surfaces on the ground: grass, sand, asphalt, rocky or earthen soil, traces on a dirt road from heavy equipment patrols, craters from explosions, soil erosion from various floods when ice or water melts. We use complex and interesting drawings that enrich the visual picture. 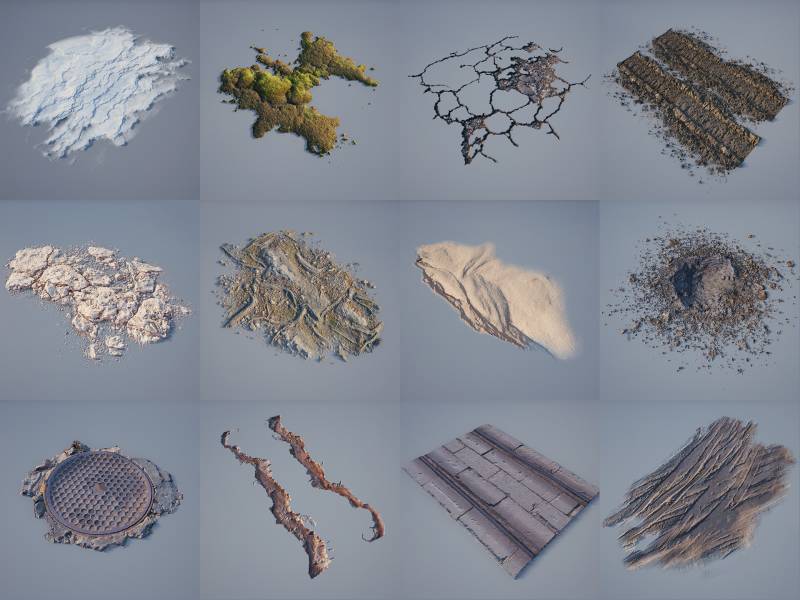 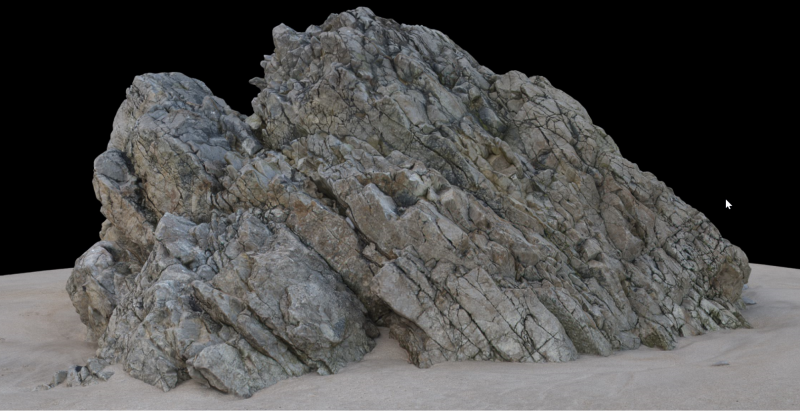 These are all really scanned pieces of terrain from different parts of the earth. We organize trips to different countries especially for these purposes. We try, of course, to do everything to the maximum nearby at our home, in Belarus, but, of course, we do not have deserts, there are no very rocky and exotic biomes. Therefore, for a texture unusual for our latitudes, we traveled several times to the Canary Islands in a desert area. Were in the north and south of France, Norway, the Murmansk region and the south of Russia. Some materials were scanned on personal travels while on vacation in Thailand, Georgia, USA.
We also shoot various monuments, some objects of simple infrastructure: concrete fences, curbs, sewer manholes. We made a special trip to the Czech Republic and Germany to scan various types of paving stones. We have a number of European urban locations in World of Tanks, and in wartime such road coverage was popular in those parts. 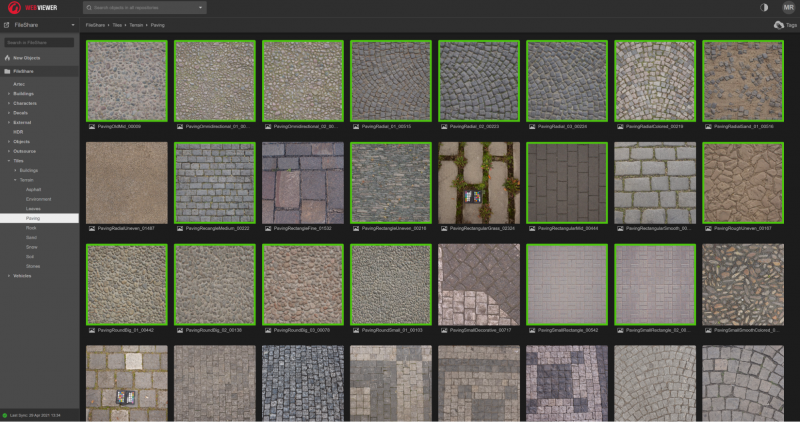 To store and sort the footage inside the studio, a special web-cataloger was created, in which it is convenient to search, view and download the required material.
- You mentioned the monuments. Tell me, are there any recognizable objects in World of Tanks that can be found, for example, during a city tour?
- We have a map of Minsk! This is probably the most dense map in terms of photogrammetry. Everything that we recreated from real Minsk was first scanned. For example, a monument to Yanka Kupala, or a sculpture with dancing girls near one of the fountains in the city center. Almost all of the houses in the game have been scanned and recreated. The Victory Monument with all its bas-reliefs was scanned in the best possible quality.

- It is ironic that the players will most likely not be able to view the Victory Monument - if you stay too long at this place, the game will end very quickly.
- Yes, in terms of gameplay, the place is quite tense. But in the training room you can see!
It is difficult to name specific objects on other maps: there are quite a few monuments in the game, not only as stand-alone ones, but also some small sculptures that adorn the architectural façade of some churches. Some of them were accurately made using photogrammetry.
- Were there situations when you photogrammetered some object, but it was used in general in a different location? For example, filmed in Norway, but did it come in handy in Minsk?
- This happens all the time. Coming back to the terrain and environment textures, everything is used everywhere. Hardly anyone will notice by eye the difference between the asphalt pavement of two different cities. Of course, we try to preserve unique authentic objects and characteristic details that are unique for a particular location, but some of the artistic solutions still come from technical requirements. We have certain restrictions on the number of unique textures and objects on the map.
For example, the game has a shop, which, by the way, is actually located in Minsk. We took a photo scan of it, and we use it both on the German map and on the English one, but practically everywhere! Since it is quite elegant, in a sense, versatile, with beautiful cast side struts - so we decided to use this successful model to the maximum.

- How does photogrammetry work when creating tanks?
- When creating models of tanks, there are several areas where photogrammetry helps us a lot. With its help, we model various objects and materials for these very tanks. Objects do not mean the shape of the tank itself, but what helps to enrich it. For example, Soviet tanks often have self-pulling logs, which are carried on special mounts on the armor. And here these logs in our vast majority are actually scanned trees: birches, pines, maples, etc. Such objects are difficult to draw convincingly with your hands, because they are all familiar to players from life experience: everyone knows what a birch looks like and birch bark. 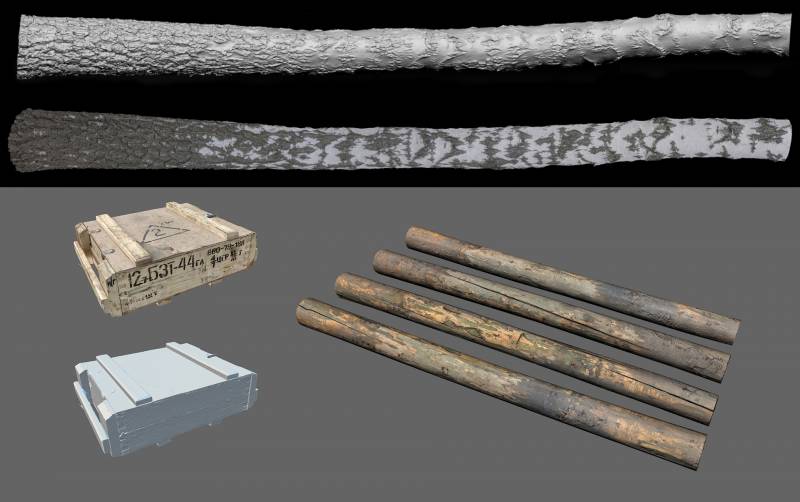 Military objects, such as ammunition boxes, repair equipment, and various army utensils, are also often photo scanned: we have the opportunity to travel to tank military units. Many soldiers and officers who serve there are big fans of our game, play actively whenever possible, so they willingly come to meet us. But of course, they don't let us near anything secret.
At one time, it helped us a lot to scan and photograph the surfaces of the armor. Tanks of the Second World War - especially Soviet ones - were famous for their, not reproachfully, low workmanship. During the war years, it was necessary to make a huge number of combat vehicles, so they were produced with an emphasis on quantity, not quality. This can be seen, for example, by the roughness of the casting. From the T-34 tank, which many have seen hundreds of times, it is noticeable that the Soviet tank is rough, cast, it has cavities in its armor. Unlike perfectly smooth, polished German tanks. And we are trying to convey this character of the Soviet tank during World War II - the materials obtained using photogrammetry helped us a lot - real textures of armor, real armor plates, traces of gas cutting, some dents, ricochets, non-penetration. We tried to scan these things as much as possible and use them on our machines. 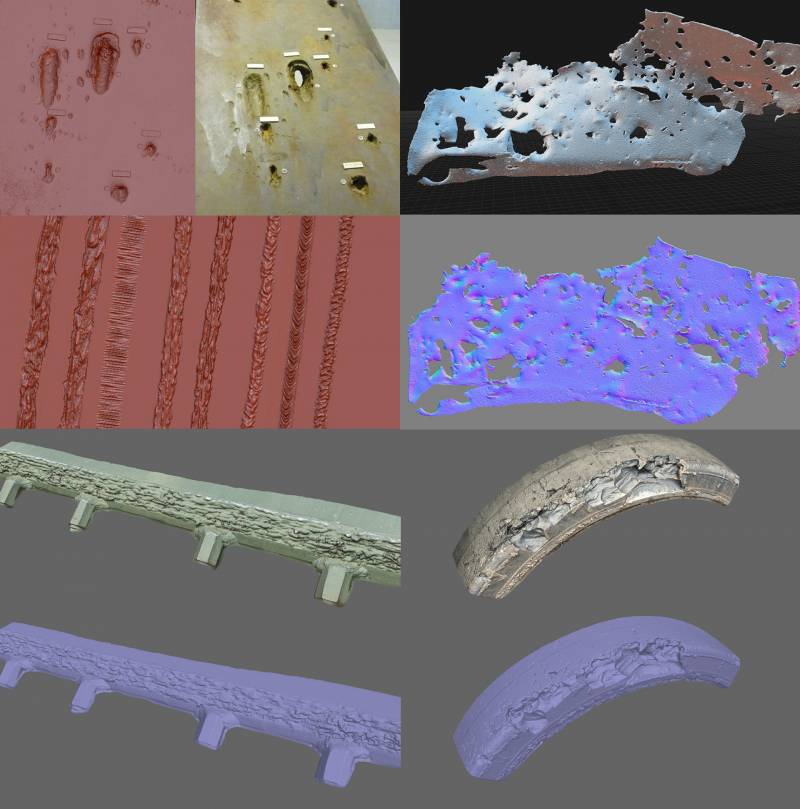 It's easier with foreign cars - it's the same as on Soviet ones, only much more accurate. We just took the materials that were obtained from Soviet cars, well, we leveled them very much, made them more accurate. And it turned out close to what it was in reality. In order for all vehicles to be recreated as accurately as possible in the game, our historians make photo reports from tank museums around the world. And we ourselves, in general, often visited Kubinka, French Saumur, German Munster, Swedish Arsenal, British Bovington - we visited everywhere, photographed and scanned.
- We figured out the details. How is the entire tank scanned?
- In this case, it is important to understand that when we scan an object and get a detailed model, then this is not exactly the same model that ultimately comes into play. The power of modern computers and video cards does not yet allow using such detailed objects in real time in the game. A fully scanned tank can consist of 50-300 million polygons, and such a number at the moment cannot be used in any game in principle. For the entire scene, the budget is typically between 1 million and 5 million triangles. And we have only one scanned tank weighs 10 times more. Such highly detailed models do not make it into the game - they are used as a 3D drawing, on the basis of which we make a more optimized low-poly version, which is used in the game.

The scanned tank is fully consistent in size, dimensions, proportions to the real car, we can see all its defects, nuances, imperfections. Using this scanned model, recreate a model that is more suitable for use in the game.

Continuing the interview, World of Tanks supervisor Mikhail Ritvinsky will talk about how accurate reproduction of tanks affects the gameplay, about vehicles with the highest degree of photorealism and about the most unusual objects that were transferred into the game using photogrammetry.

Ctrl Enter
Noticed oshЫbku Highlight text and press. Ctrl + Enter
We are
Interview of V. Putin to Channel One and the Associated Press AgencyWhat you didn't want to know about England
Military Reviewin Yandex News
Military Reviewin Google News
32 comments
Information
Dear reader, to leave comments on the publication, you must sign in.