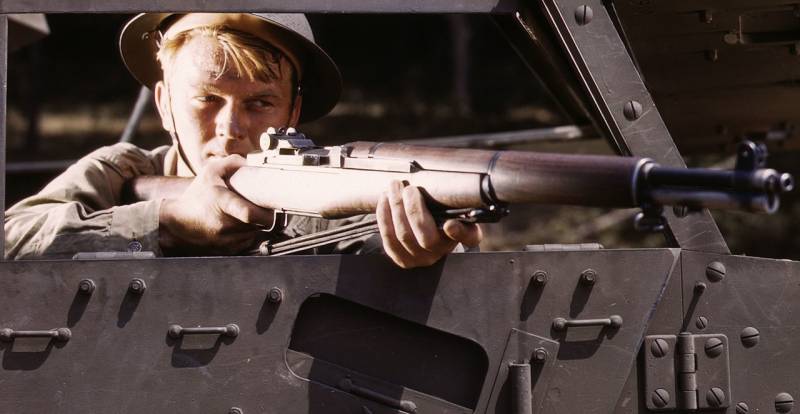 Much of the work biography of J.K. Garanda was associated with the creation, debugging, modernization, etc. self-loading rifle M1. However, shortly after the end of World War II, the designer with employees of the Springfield Arsenal took on a fundamentally new project. The experimental T31 rifle was created for a promising cartridge and had to have a completely new architecture.

At the end of 1945, the American military department launched a competition to create a promising automatic rifle chambered for the new T65 cartridge (7,62x51 mm). Over the next few months, three design teams joined the work, one of which was headed by J. Garand. In the near future, it was planned to compare the resulting rifles and choose the most successful one.

The new rifle was supposed to replace the existing M1 Garand as the main weapons army, which determined the basic requirements for it. In addition to using a new cartridge, it required reduced dimensions and weight. The authors of the three projects solved similar problems in different ways, and the most interesting were the ideas of J. Garand. They were carried out in a project with a working index T31.

"The cart is ahead of the horse"

The T31 project used a number of unusual solutions, completely new or tested during the development of the M1 rifle. So, to obtain the maximum barrel length with the minimum dimensions of the weapon, a bullpup scheme was proposed. Due to the specifics of the new cartridge, the automation was built according to the "gas trap" system. Also, new designs of various parts and assemblies were used.

G. Garand himself described the unusual layout with the magazine behind the handle and other innovations with the proverb about placing the cart in front of the horse. However, contrary to folklore, such decisions should have yielded the desired result.

The T31 rifle had a specific appearance. The longest element was the barrel with a flame arrester and a massive outer casing. Under the breech of the barrel was a control handle with a trigger and a safety-translator flag. Behind them was a receiver with a larger section with a magazine receiving window at the bottom and a window for ejecting cartridges on the right. A wooden stock was attached to the back of the box. 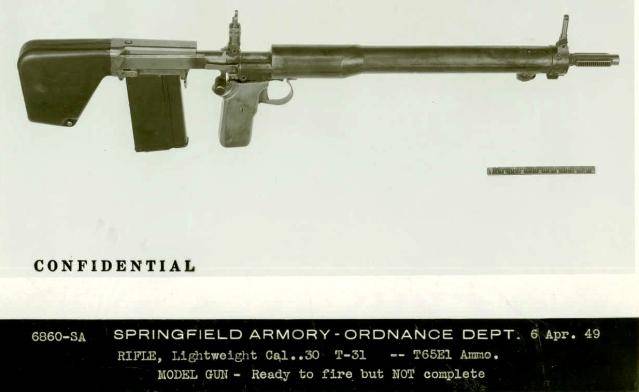 Most of the barrel was protected by a complex casing. Since its inception, he managed to change his purpose. According to the memoirs of the project participants, the casing was initially considered as a means of air cooling the barrel. When firing, the powder gases coming out of the muzzle device had to pump atmospheric air through the casing.

However, then the casing was used in the automation as a gas chamber. The final version of the T31 had an automatic venting of gases from the muzzle of the barrel, in front of the flame arrester, inside the casing. In the rear of the casing there was a movable cylindrical piston with a short stroke, put on the barrel. With the help of an external pusher, it was connected to the shutter and provided its rollback. There was a return spring inside the casing.

Some sources mention that it was possible to integrate some air cooling means into the gas engine based on the barrel casing. However, the reliability of such information is questionable; the technical features of such a solution are also unclear.

The bolt of the rifle, which locks the barrel by turning, was based on the part of the M1 rifle, but had some differences, mainly related to the features of the T65 cartridge. The rollback was carried out into the cavity inside the butt. The side window for the ejection of the sleeves was closed by a shutter and a movable cover.

The firing mechanism was located inside the pistol grip and in the receiver with the connection of parts by means of a longitudinal thrust. USM had single and automatic fire modes. Switching was carried out using a flag on the back of the handle. In automatic mode, the technical rate of fire was 600 rds / min. 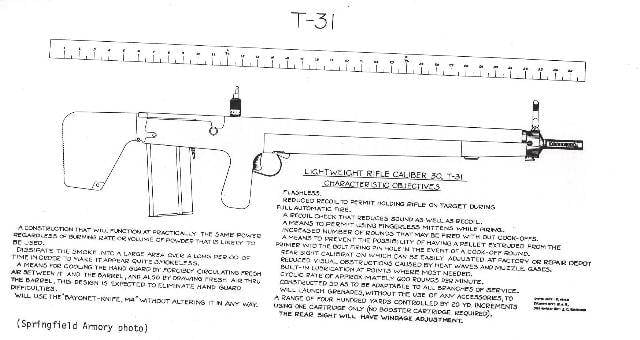 Description of the rifle
An original 31-round box magazine was developed for the T20. Subsequently, this product was used with some new experimental designs.

The linear arrangement of the weapon led to the need to use specific sighting devices, probably borrowed from the German FG-42 rifle. At the muzzle device and above the chamber, the folding bases of the front sight and diopter were attached.

Already in 1946-47. Springfield Arsenal manufactured at least one T31 prototype rifle. According to some sources, several more rifles were assembled for testing. The product of an unusual appearance was sent to the shooting range, where it was quickly possible to establish its strengths and weaknesses.

Gas-operated automation with a volumetric chamber in the form of a barrel casing showed mixed results. The exhaust of gases near the muzzle reduced the spread in pressure and reduced the effect of the quality of cartridges on the results of firing. In addition, with this scheme, the bolt began unlocking after the bullet left the barrel. At the same time, the pressure in the bore fell to safe values, which practically excluded negative phenomena in the process of removing the sleeve.

A big drawback of the proposed scheme was the tendency to pollution, however, it did not interfere with long-term shooting. During endurance tests, the experienced T31 fired 2000 rounds with breaks for reloading and cooling. After this inspection, more than a pound (454 g) of powder carbon was removed from the barrel shroud during cleaning. Despite this contamination, the rifle fired all the shots required.

In its current form, the T31 rifle did not have decisive advantages over competitors and could not immediately win the competition. The team of J. Garanda continued to work with the aim of improving the rifle. In the future, the improved weapon was planned to be submitted again for testing. 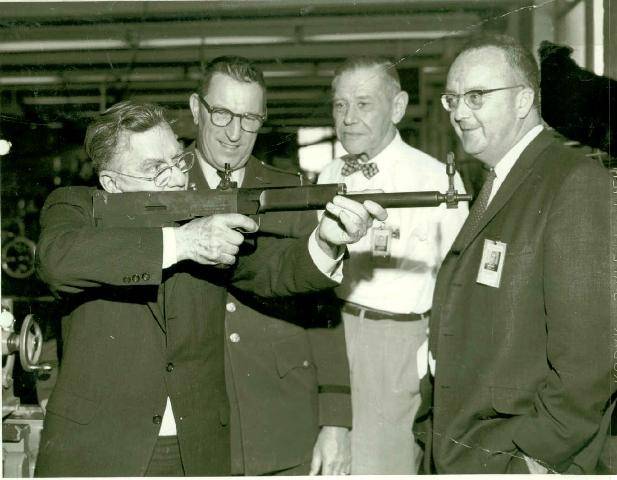 J. Garand demonstrates the second version of the T31 rifle
The updated version of the T31 was supposed to receive a completely new automation. Instead of diverting gas from the muzzle into the casing, it was proposed to use a more familiar and well-tested scheme with a gas chamber and a piston of a smaller section. Perhaps it was this innovation that made it possible to free up space inside the barrel casing and combine gas-operated automation with forced air cooling of the barrel.

The new rifle differed from the first T31 in a new casing with a narrowed front part and an oval rear section that contained a gas unit. In addition, a new extended buttstock was developed that covered the receiver and protruding chamber. Sights were still mounted on high bases.

The rebuilding of the rifle proved to be a difficult process and took several years. Then the project came to a halt, for both technical and organizational reasons. In 1953, after many years of fruitful work, J. Garand left the Springfield Arsenal. The T31 project ended up without a leader and without a main supporter. By that time, other gunsmiths had become disillusioned with the project; the military also showed no interest. By this time, at least one prototype of the updated configuration was made, but its tests were not carried out.

Under these conditions, the continuation of the development turned out to be impossible, and the project was closed as unnecessary. Two prototypes, including a test sample, were deposited. In 1961, the first T31 went to the armory museum at the arsenal. The exact fate of other items is unknown.

Some of the ideas of the T31 projects were subsequently used in the development of new promising weapons. For example, the magazine for the T31 moved into new projects and, with some modifications, was included in the kit for the serial M14 rifle. At the same time, basic project solutions, such as layout or automation with a volumetric gas chamber, remained unclaimed. As a result, the last project of J.K. Garanda, having given some useful developments, in general did not solve the tasks set. It was interesting from a technical point of view, but turned out to be useless in practice.