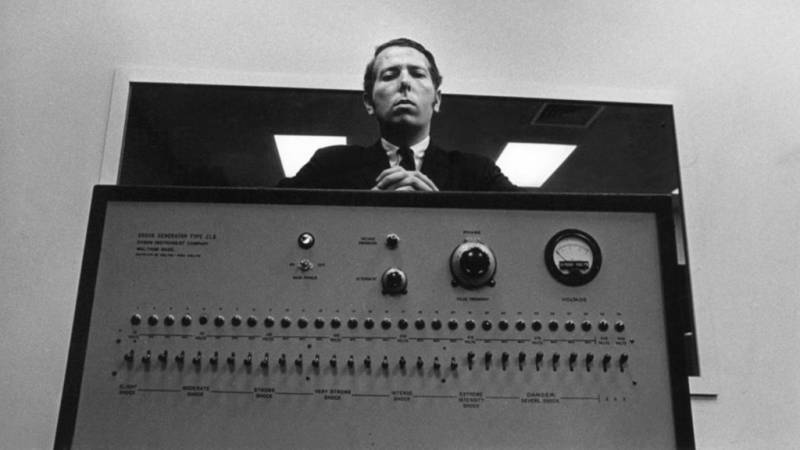 In the previous part stories it was about the preparation of the world famous experiment of Philip Zimbardo in 1971. However, the story would not be complete without mention of Stanley Milgram's equally iconic experimental study. 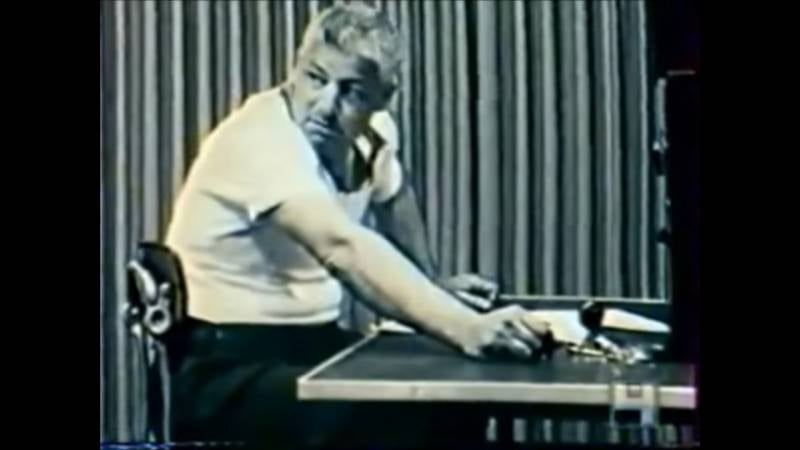 A still from the documentary film Obedience by S. Milgram (1965). Source: youtube.com
Milgram's development as a professional psychologist was greatly influenced by distant Jewish relatives, former prisoners of concentration camps. After the war, they found temporary refuge in the United States at the home of the Milgram family.

The topic of the Holocaust after World War II, in general, was a separate phenomenon, which was treated in different countries in very different ways. In particular, in Germany in the 40-50s it became a taboo issue and there was no talk of any national reflection.

A few examples. Former prisoner of the concentration camp Primo Levi was unable to publish his book "Is It Human?" Immediately after the war. in the German publishing house "Einaudi". He managed to do this only in 1947, and then in a small circulation and not particularly known publishing house. Former prisoner of Auschwitz and future Nobel laureate Elie Wiesel could not publish his first book "And the world was silent" either in the USA or in Europe. As a result, it came out in Yiddish only in 1956 in Argentina. And sensational evidence about what was happening in the concentration camps from the notes of the deceased member of the Sonderkommando Zalman Gradovsky appeared in European languages ​​only 44 years after the war. The notes were found in 1945 in the ground under one of the Auschwitz ovens.

A few more paradoxes regarding the European perception of the catastrophe of mass extermination in concentration camps. The German chemical concern Degussa AG, which produced the Cyclone B gas during the war, was liquidated only in 2007. And in 2003, he became famous for making a special anti-vandal solution for the Berlin memorial to Jews who died in the Holocaust. A scandal erupted, and that controversial contractor was removed from construction. Much earlier, in 1953, residents of the town of Wehrl celebrated the release of war criminal Erich von Manstein. In particular, a day off was organized for children in schools so that they could witness the return of the "national hero" with their own eyes.

Milgram's experiment itself preceded the well-known trial of the Gestapo Eichmann in 1961 in Israel. Interestingly, Eichmann himself was ready to voluntarily appear before a German court immediately after the fall of the Third Reich - he was so sure of a mild sentence. The excessive sympathy for war criminals on the part of the new Germany forced the Jews to act on their own.
It was this background with respect to Nazism that was formed by the 50-60s in Europe.

The United States has not strayed far from its overseas cousins. And it took another decades for the real hunt for the Nazis who took refuge in America to begin.

In the scientific community, Nazism was treated as a phenomenon that requires an explanation. It is likely that ethnic Jew Stanley Milgram, in addition to scientific interest, tried to draw public attention to the legacy of the Holocaust. The psychologist considered that the monstrous atrocities committed in Nazi Germany were the result of the simple influence of authority on a subordinate. This had to take especially hypertrophied forms in the German society, accustomed to a clear order, subordination and detailed planning.

Milgram, an excellent experimenter at Yale University, came up with a simple and very visual experience in which three people participated - "teacher", "student" and "experimenter." All attention was directed to the behavior of the "teacher", the only person not privy to the true purpose of the experiment. By the way, he was paid $ 4,5 for participating in the experiment, which for 1963 was a good salary for an hour and a half experience. At the same time, the “teacher” received money regardless of the results of the experiment. The worst of all was in the experience of the "student" - he was constantly beaten with electric shocks. Of course, not really, but the "student" had to act out the convulsions at a high level, otherwise it was impossible. According to the scenario: the “teacher” invited from the street had to offer the “student” simple tasks and, in case of an incorrect answer, beat the unfortunate person with an electric shock. 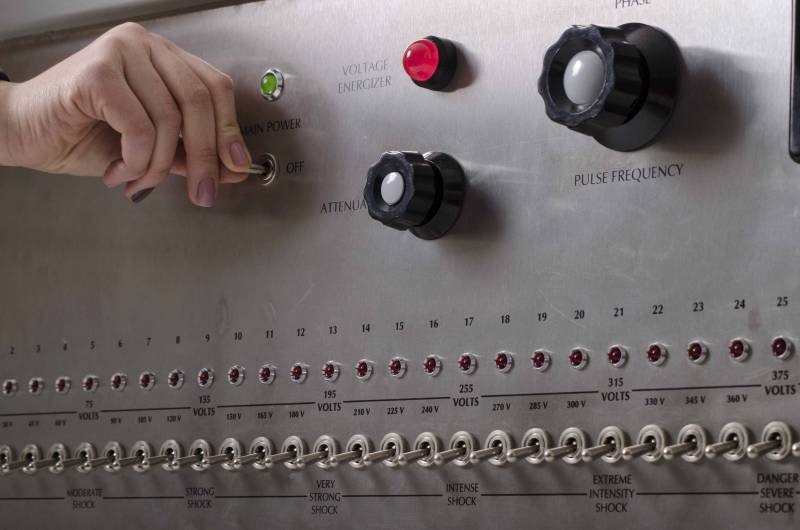 Toolkit "teacher". Source: ibtimes.co.uk
A special generator was developed with a voltage step of 15 V, up to 450 V.

This attention to detail gave Milgram's experiment the necessary quantitative basis for statistical calculations, which dramatically increased the reliability of the results. Again, the "student" did not receive an electric shock, but only imitated it plausibly.

In Milgram's experiment in the classical version, “teacher” and “student” did not see each other, but the man with the switch could hear the screams of the punished well. The "experimenter" constantly pressed on the "teacher", forcing him to increase the voltage with each incorrect answer. The role of the "experimenter" was performed by an authoritative person, usually aged and dressed in a white robe. In the case when the “teacher”, out of humane motives, did not dare to continue the execution, the prepared phrases were used: “Please continue”, “The experiment requires you to continue” and “It is absolutely necessary that you continue”.

If the subject refused to increase the tension after the call-phrase "You have no other choice, you must continue," the experiment ended. And the “teacher” had the right to try on the role of a benefactor. But there were only 35% of them, the rest continued to clearly follow the orders of the "experimenter", bringing the "student" to a painful shock. 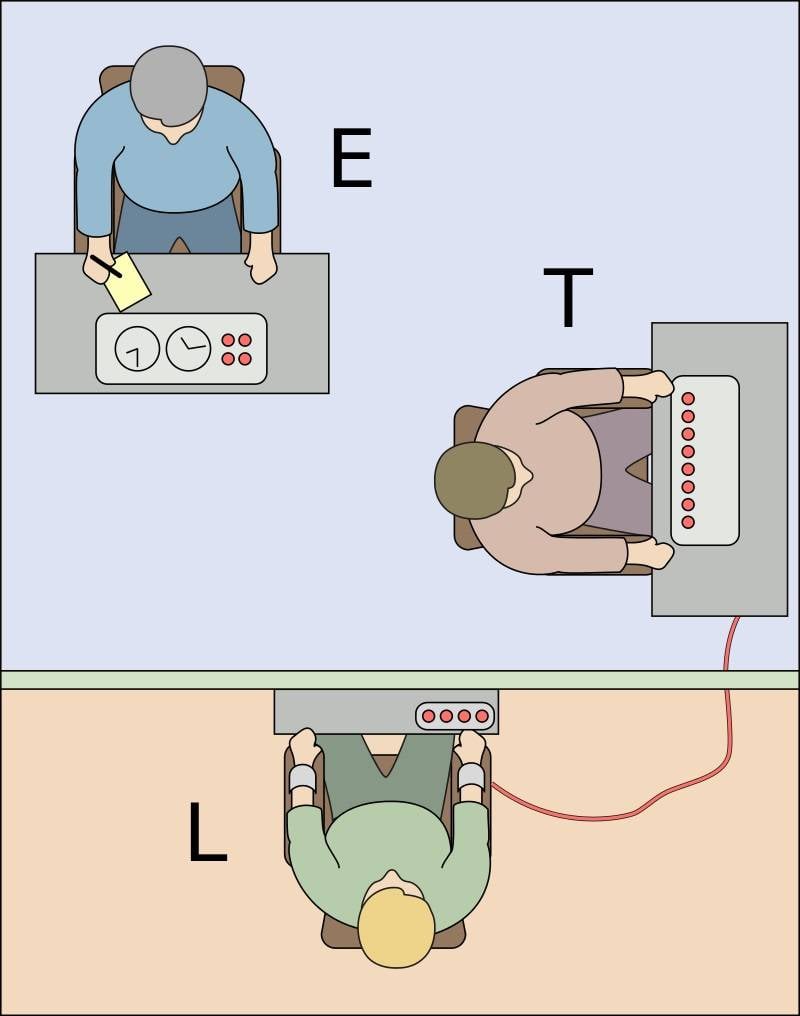 The layout of the protagonists of the experiment. E - "experimenter", T - "teacher" and L - "student". Source: wikipedia.org
What do the results of Stanley Milgram's resonance experiment say?

First, that there are enough people among us who are capable of mass murder and other atrocities. At the same time, they do not show any sadistic inclinations and, most likely, do not even realize their "potential". And do not think that in Nazi Germany at the end of the 30s, many such maniacs accumulated, who were later packed into the ranks of the SS.

Milgram repeated the experiment many times in the United States and Europe. In general, the results from sample to sample did not differ much from each other - about 65% of "teachers" continued to shock another person under pressure from the authority of the "experimenter." Many humanists tried to refute the conclusions of Milgram, but everything fell apart on an unsurpassed scenario of the experiment, where it was possible to calculate everything, reveal patterns and mathematically substantiate.

Secondly, the results of Milgram's experience say that a key factor in the madness of the Holocaust was the phenomenon of submission (sometimes blind) to an indisputable authority or simply to the authorities. The "experimenter", as the manager of all action, had power and authority in the eyes of the "teacher". This allowed him to over and over again force the unfortunate to shock the unfortunate just for the wrong answers.

In the Third Reich, Hitler was the authority for the Nazis, to whom was added a host of other bonzes - Goering, Goebbels, Himmler and others. All of this allowed performers, from the commandant of Auschwitz Rudolf Höss to the last lousy capo, to set the hellish Holocaust machine into action. Most importantly, they could shift responsibility to their commanders, they say, an order came, and we are military men. If it is simpler, then it is worth a person simply to impute cruelty to duties, and for the most part there will be no problems with fulfilling professional duties.

In the Third Reich, nothing special in social terms was observed - people were like people, nothing different from other nations. The Nazis became Nazis by a natural tendency to obey authority. And even if they paid for it!

In Nazi Germany, state political and ideological pressure was added to this. And the psyche of the average burgher, as they say, “floated”, which resulted in the tragedy of the Holocaust, the mass extermination of civilians and prisoners of war. This is how Stanley Milgram interpreted the results of his experiments as applied to Nazism.

A new impetus to research was given by the experiments of Philip Zimbardo, but more on that at the end of the material.

Ctrl Enter
Noticed oshЫbku Highlight text and press. Ctrl + Enter
We are
What you didn't want to know about EnglandList of destroyed the largest and most high-tech enterprises
Military Reviewin Yandex News
Military Reviewin Google News
122 comments
Information
Dear reader, to leave comments on the publication, you must sign in.