Development and prospects of anti-helicopter mines 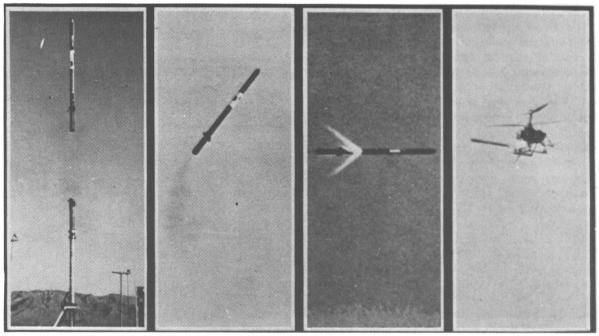 Tests of the SIAM complex. The rocket spotted and hit an unmanned target. Photo FAS

Army helicopters aviation are an important tool that can influence the course of battles. Accordingly, a developed army may require specialized or improvised means of dealing with such a threat. One of the ways out of this situation is the so-called. anti-helicopter mines. At different times, different designs and solutions of this class with differing capabilities were proposed. However, they did not become numerous and did not become widespread.

During the Vietnam War, helicopters clearly demonstrated all their capabilities and advantages. A natural consequence of this was an active search for methods and means of dealing with such a threat. Mines quickly took a prominent place in this context. Due to the lack of specialized anti-helicopter samples, North Vietnam actively used available anti-tank and anti-personnel mines, as well as improvised devices.

The simplest method of defense against a helicopter was the mining of the intended landing site using push and pull ammunition. The detonation of any ammunition could cause damage to both the helicopter and its cargo, landing party or crew. However, dismounting fighters from hovering at a low altitude sharply reduced the risks.

The answer to this was the emergence of a kind of "traps". The mines were placed in trees at a certain height above the ground; the target sensor wire was suspended in the air. In this case, even without landing, the helicopter could hook the wire and cause an explosion. Damage to the car in flight or while hovering threatened to fall.

At the end of the seventies, the development of a promising anti-aircraft complex to combat low-flying aircraft and helicopters began in the United States. The initiator of the work and the author of the concept was the DARPA agency; the development contract was awarded to Ford. The project was designated as Self-Initiated Anti-Aircraft Missile or SIAM. This complex is often called the first specialized anti-helicopter "mine". 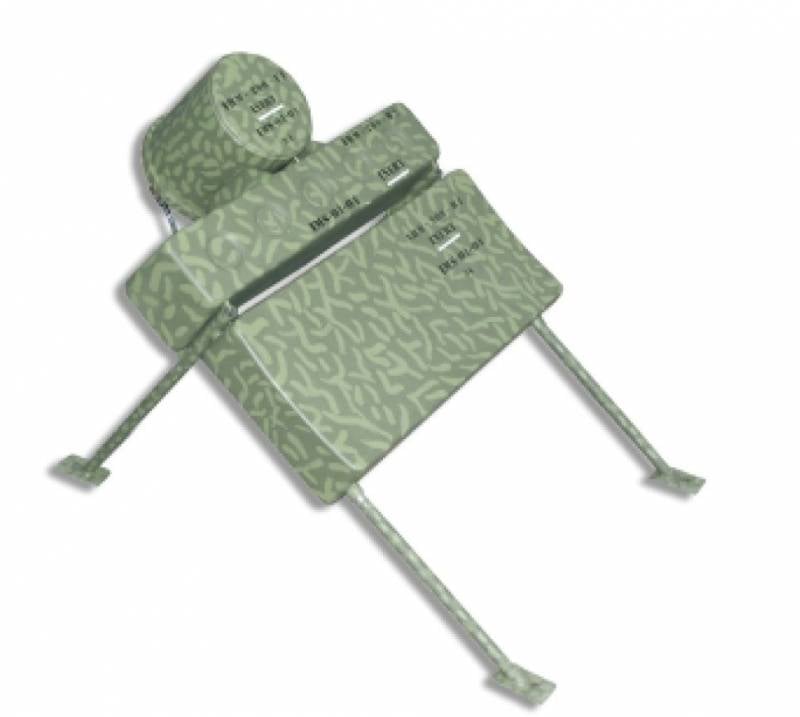 Bulgarian mine AHM-200-2. The cylinder at the top is the target sensor, the rectangular blocks are charges. Photo by Kintex
The SIAM product was a lightweight and compact anti-aircraft missile system. It included a light short-range missile with a radar and infrared homing head and a vertical launch launcher with communications equipment. The installation could be placed on the ground in a given area. The SUBADS (Submarine Air-Defense System) project was also being worked out - in this case, the rocket was placed on a special pop-up buoy and based on a submarine.

In 1980-81. SIAM missile has been tested with positive results. She demonstrated the ability to self-detect and engage targets. They also confirmed the fundamental possibility of "mining" the terrain with the help of new complexes. However, the army and the Navy were not interested in the new development, and the project was soon closed.

In the eighties, the Bulgarian industry began to develop a new family of mines, which was planned to include means to combat armored vehicles, vehicles and helicopters. On the basis of the proposed and tested solutions, four projects of anti-helicopter mines with different features and characteristics were created. They are now manufactured by Kintex.

The family uses several main components. First of all, it is an electronic fuse with acoustic and radar target sensors. The mine is installed with a certain elevation angle, which allows it to control a given sector of the airspace. When a helicopter or other target is detected at a distance of no more than 100 m, an explosion occurs. Several types of warheads have been created with ready-made striking elements or crushing fragmentation shirts. The range of destruction is up to 200 m. 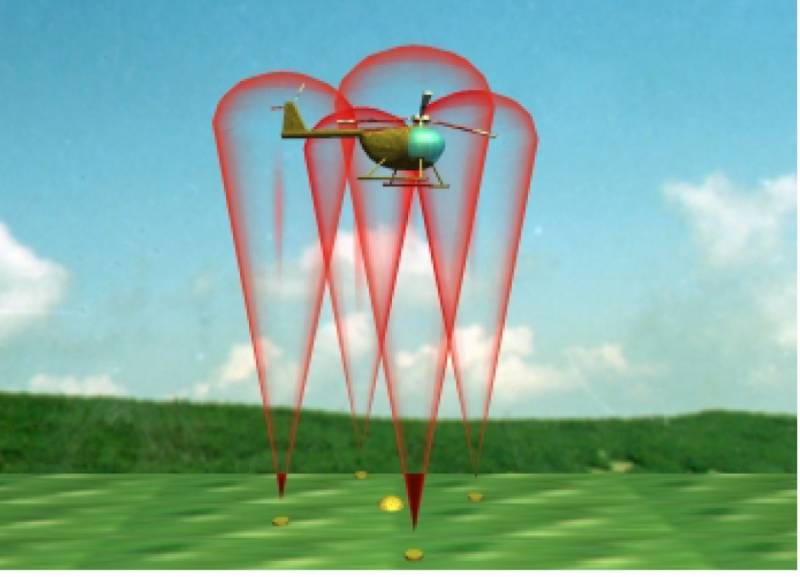 The principle of operation of the 4AHM-100 complex. Kintex graphics
The anti-helicopter mine weighs 35 kg. The AHM-200 includes two different warheads with charges with a total mass of 12 kg. The AHM-200-1 product is similar in design, but differs in increased charges and a mass of 90 kg. AHM-200-2 with the same mass carries charges of a different configuration. Developed the 4AHM-100 complex. It included one control unit and four warheads with simultaneous operation at his command.

According to some reports, anti-helicopter mines entered service with the Bulgarian army. In addition, the industry has repeatedly presented its mines at various military-technical exhibitions and was looking for a buyer. However, reliable information about the export of such weapons are absent.

Taking into account foreign experience, its own anti-helicopter mine was developed in our country. At the turn of the nineties and two thousandths, the State Treasury Research and Testing Range of Aviation Systems (GKNIPAS) carried out Boomerang development work, which resulted in a PVM product. In 2003, the mine was shown to the public for the first time, and later it passed all the necessary tests. In 2012-14. it was reported about the imminent acceptance into service.

FDA is made in a housing with hinged petal lids. The modification for manual installation has 4 covers, for remote mining - 6. Under the protection of the petals are the electronic components and the guidance system of the warhead. The mine is equipped with an acoustic sensor for primary target detection and several IR receivers to accurately determine its position. The mine weighs only 12 kg and carries a shaped charge weighing 6,4 kg. It is possible to connect several FDA using wires. 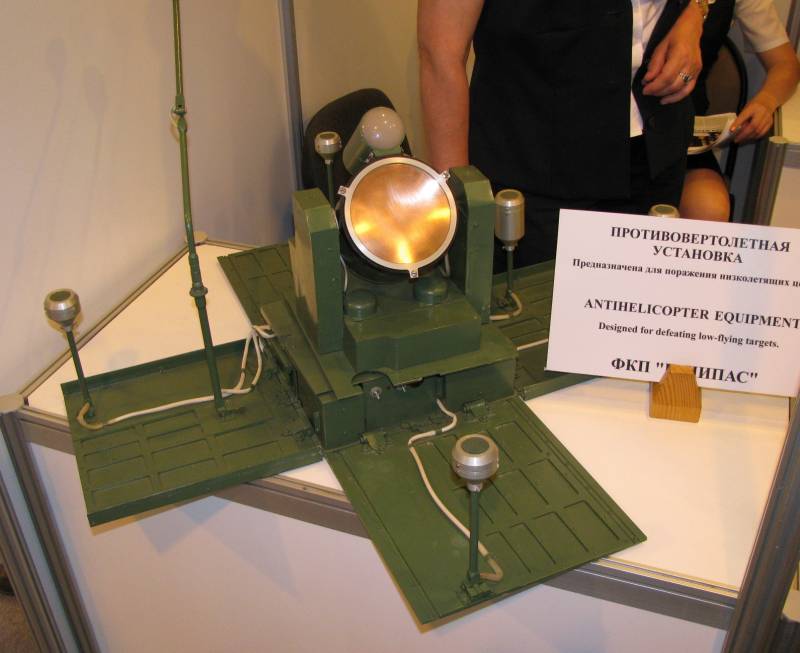 Mina PVM "Boomerang" in a combat position. Photo Russianarms.ru
In combat position "Boomerang" with the help of an acoustic sensor monitors the air situation. When aircraft noise is detected, IR sensors are connected to work. This allows you to determine the direction of the target, the distance to it, as well as deploy the warhead to it. When the target approaches at a distance of less than 150 m, the warhead is detonated with the formation of a shock core. If the target is removed, the mine goes into standby mode. Wired communication of several mines makes it possible to ensure the destruction of one object with one ammunition, without unnecessary expense.

Later, a new mine was developed with similar operating principles, but in the form factor of an anti-tank ammunition. She received a low cylindrical body with 12 warheads, as well as an updated combined search system. The target detection range of such a mine is 400 m; range of destruction - 100 m.

The potential of army aviation is obvious, which implies the need for the availability of means to combat it. The main role in this is played by military air defense, but it is possible to attract other forces and means - incl. anti-helicopter mines of special design or improvised.

From the experience of the Vietnam War, it became clear that mines on the ground or in trees are capable of disrupting the landing of an assault force and its subsequent actions. At the same time, they could not do anything to the flying helicopters. This circumstance was taken into account in all subsequent projects of specialized anti-helicopter weapons. Unlike improvised Vietnamese "traps", new products such as SIAM or PVM were able to search for and hit a target in the air, within a fairly large area.

different FDA configurations. Photo Bastion-opk.ru
Through the use of new ideas and modern technologies, it was possible to obtain sufficiently high tactical and technical characteristics. Modern anti-helicopter mines are capable of staying on duty for a long time, independently detecting a target and hitting it at a distance of up to 100-150 m. In terms of basic parameters, they cannot compete with full-fledged air defense systems, but their individual features provide some advantages.

It is easy to see that all the projects of mines considered provided for the use of combined target search means. This ensures the required detection reliability and accuracy. In addition, the combination of different equipment makes it possible to determine even the distance to the object and calculate the optimal moment of detonation of the warhead.

The American SIAM project proposed attacking a target with a guided missile, but this led to an increase in complexity and cost. Such an air defense system could not be regarded as a simple and light "mine". Subsequent projects included fragmentation and cumulative warheads firing shrapnel or an impact core. With a shorter range of destruction, such warheads provide the necessary probability and have an acceptable cost.

Due to the high characteristics, modern designs such as the Boomerang can be used to protect specified areas from low-flying targets and from helicopter assault. They can be used with equal success on their own territory or behind the front line. In the latter case, saboteurs or a remote mining system can block the operation of enemy airfields. At the same time, the target of FDA can be not only a helicopter: aircraft on takeoff and landing have a limited speed, which makes them a convenient target for a mine. 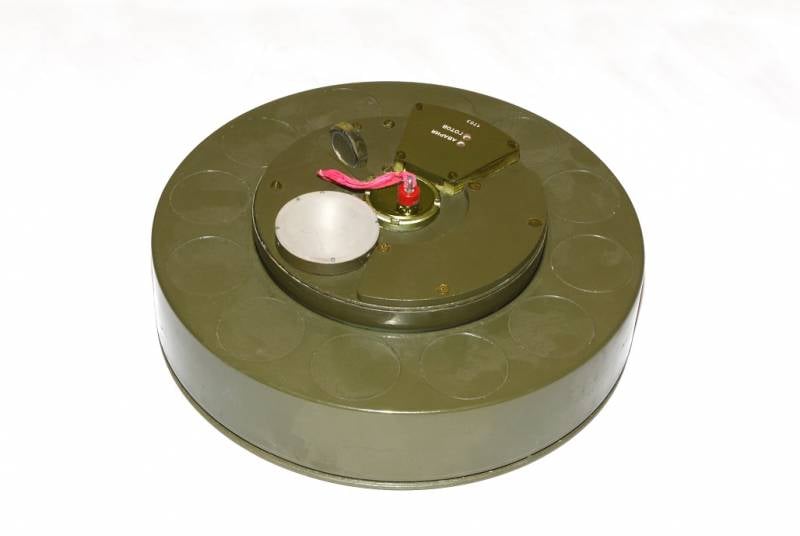 New configuration of anti-tank mine from GkNIPAS

However, to date, only a few anti-helicopter mines have been developed, and such weapons have not become widespread. In addition, so far nothing is known about the use of such products outside the landfills. The real prospects of the direction turned out to be limited, and there are no prerequisites for changing this situation.

For all their advantages, anti-helicopter mines have several problems and controversial features. First of all, the question of the need for such weapons remains open. Modern armies have a well-developed military and air defense system capable of effectively fighting enemy army aviation.

The introduction of anti-helicopter mines requires coordinating the actions of engineering troops and air defense. Moreover, in some situations and contexts, they will duplicate each other, which will lead to the solution of the assigned task by diverting forces and means. At the same time, in their original roles, sappers and air defense show good results and the need to combine their efforts is questionable.

Thus, the concept of an anti-helicopter mine has pros and cons. As practice shows, the overwhelming majority of armies do not consider such ammunition necessary and do not accept them into service. Whether this situation will change in the future is unknown. So far, there are no prerequisites for this. However, when they appear, interested armies will be able to familiarize themselves with the few existing samples and even purchase them.