Historical detective. Fedot, but not that one! Yes, who does not know (okay, someone may not know) the gallant partisan, poet, swordsman, hussar Denis Davydov? Many people know from the films. But I bet that many have not read Davydov, this is not fashionable in our time.


In general, the poetry of Denis Davydov is unique. A lot of poems are read, let's say, hard. But there are verses that are quite enjoyable. Before starting your basic historical trial, I will quote one of the poems that I like. Not just like that, but as a touch to the portrait of Davadov.

Hussar confession
I repent! I have been a hussar for a long time, always a hussar,
And with a gray mustache - all a slave of a young habit:
I love riotous noise, minds, speeches fire
And loud champagne tricks.
From my youth, the enemy of prim pleasures, -
I feel stuffy at feasts without will and plowing.
Give me a chorus of gypsies! Give me an argument and laughter
And a pillar of smoke from the pipe puff!

I'm running a century of gatherings, where life is in one foot,
Where favors are carried by weight
Where is frankness in shackles
Where body and soul are under pressure;
Where arrogance and meanness, nobleman and slave,
Where epaulettes obscure the whirlwind of dance,
Where so much sweat under the pillows ...
Where so many belly are tightened in corsets!

But I won't say that on a crazy day
I did not sin either, I did not visit the fashion circle;
So as not to seek to sit under the blessed shadow
Stout storytellers and gossips;
So that fights with the wits of the Bonton run away,
Or through the curls of an inflamed lanita
I would not hum love in a whisper
To a beauty tired of a mazurka.

But that is a raid, a swoop; I give him a moment,
And again favorite habits triumph!
And I'm in a hurry to my hussar family,
Where more champagne tricks are popping.
Down with hooks, from throat to navel!
Where are the pipes? .. Veisya, smoke, in a daring expanse!
Roskoshavay, merry crowd,
In a living and fraternal willfulness!

Hope you enjoyed it. There is everything that we are used to understanding by the words "Hussar Denis Davydov": hussars, brotherhood, booze, balls, beauties, the sound of spurs and sabers, and so on ad infinitum.

And tell me, how do you like the author? A handsome colonel in snow-white leggings, a portrait that can still be found on the Internet at the appropriate request? Works by the great Russian portrait painter Orest Kiprensky (1782-1836), whom I consider to be really the best Russian portrait master. However, just look at what kind of people and how Kiprensky wrote, you will understand everything yourself. Recommend.

The whole point is that the portrait above is not Denis Davydov.

Yes, this portrait, simply magnificent, painted in 1809, depicts a certain hussar colonel. All of himself handsome, confident, powerful. Agree, if you take what we know about Denis Davydov from films - well, it's better not to come up with an illustration.

There is such a thing in human psychology. When you have not personally seen a person, you know him only by the same poems or songs - it is very difficult not to finish drawing everything in your head yourself, especially if your imagination works fine.

And in 1826 in St. Petersburg, in the Winter Palace, the exhibition "Military Gallery" was opened. And there were shown portraits of many commanders and military men, fortunately, the Patriotic War ended seemingly not so long ago, there was enough time to paint portraits and battle paintings. 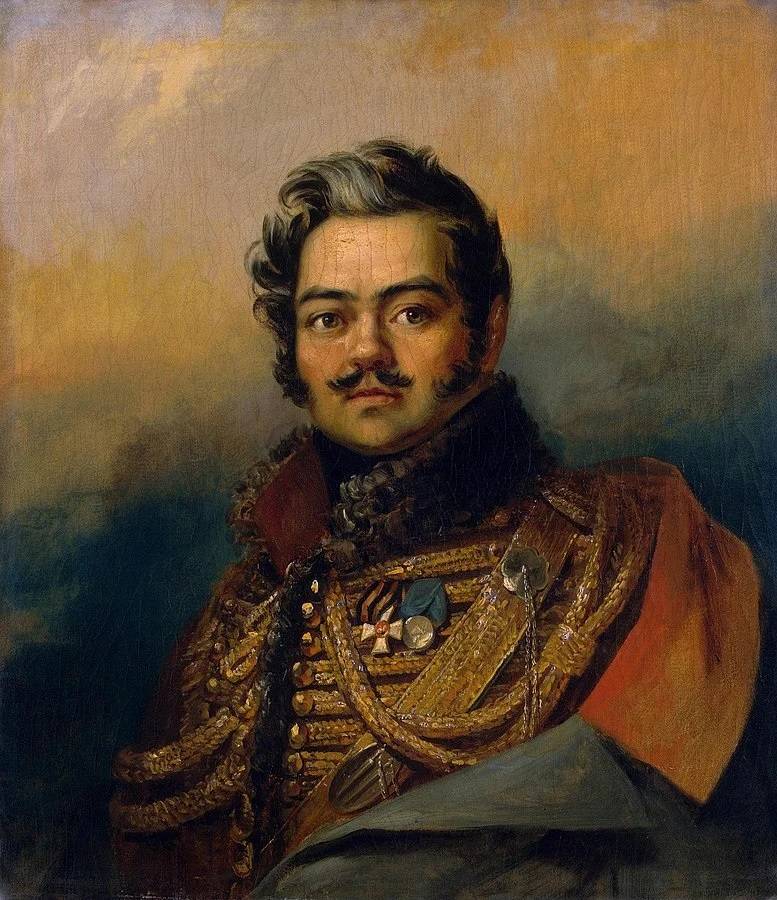 The British portrait painter, very fashionable at the time, painted portraits of 329 officers and soldiers, participants in the Patriotic War, including portraits of Kutuzov, Barclay de Tolly and Davydov. And in the "Military Gallery" was precisely his portrait, and not the work of Kiprensky.

And Kiprensky? And Kiprensky, according to the documents of the Council of the Imperial Academy of Arts, received the title of academician in 1812. For a number of paintings, including "Life-Hussar Colonel Davydov". I draw your attention, just Colonel Davydov, no initials.

And here the question arises and the understanding that yes, according to all documents, the portrait is Davydov, but not Denis.

In addition, the hussar uniform in the portrait belongs to the colonel of the Life Guards Hussar Regiment. To which Davydov had the most direct relationship, but his title was much lower. Yes, Denis Davydov became colonel, but in the ranks of the Akhtyrka hussar regiment. And there already the appearance of the hussars was somewhat different. And a little later, in 1812. 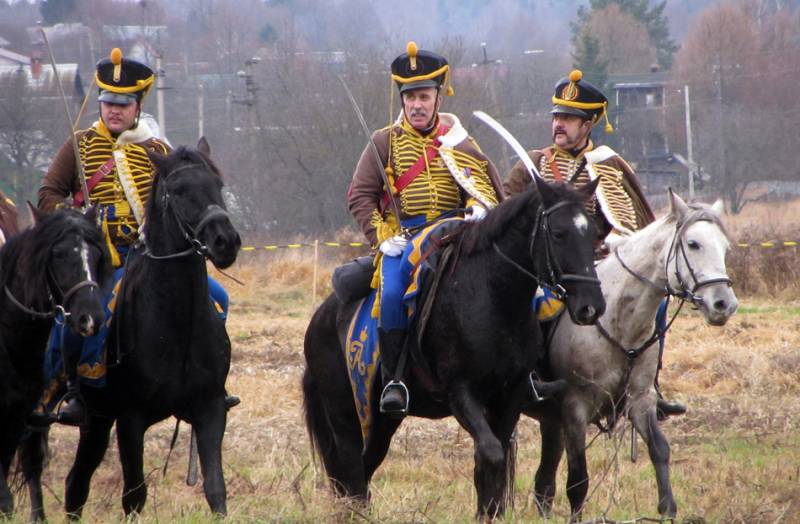 Hussars of the Akhtyrsky regiment, modern reconstruction
In those days, there was such a practice: the person depicted in the portrait had the right to redeem it. But the hussar colonel did not buy his portrait, and he stayed with Kiprensky. The artist took the portrait with him, trying to "attach" it. In 1831, Kiprensky tried to get a loan from Emperor Nicholas I in the amount of 20 thousand rubles on the security of eight paintings, including our portrait. Kiprensky was not given money, and he exhibited the portrait in 1832 and 1833 in various galleries in Italy.

In 1836 Orest Adamovich Kiprensky died. The paintings were sent from Rome to St. Petersburg, to the Academy of Arts. There, in the inventory, the document was listed as "Portrait of Davydov in a hussar uniform." Pay attention, not "Davydov's hussar", but "Davydov in a hussar's uniform," which made the situation even more confusing. And again without any initials.

In 1837, the Academy bought a number of paintings from the heirs of Kiprensky, including a portrait of Davydov.

The portrait began to be exhibited in various galleries at exhibitions. In the catalog of one of the exhibitions in Germany, in 1840, in German, the portrait was listed as "The image of the partisan Davydov." This is how the first error occurred.

The second happened in 1842, when in the catalog of the Academy of Arts itself the portrait was designated as "Portrait of D. Davydov".

In general, it is so logical. Husar Davydov? Hussar. Partisan in World War II? Partisan. So this is Denis Davydov.

By the way, the son of Denis Davydov, Nikolai, the leader of the nobility in Saratov, ordered a copy of his father's portrait from the Academy in 1874, and he was talking about a copy from the portrait by Kiprensky.

You see, even the closest relatives believed that Denis Davydov himself was in the portrait.

Silence and tranquility continued until our (almost) time. Until 1940, when an employee of the Tretyakov Gallery, Esther Atsarkina, found an entry in the register of Kiprensky's paintings in the archives. This was the same register that Kiprensky attached to the application for a loan to Nicholas the First.

The register included “Portrait of Ev. V. Davydov in a life-hussar uniform, almost a full-length painting. Written in 1809 in Moscow. "

Not Denis. Who? At first we thought - Evdokim Vasilyevich Davydov. 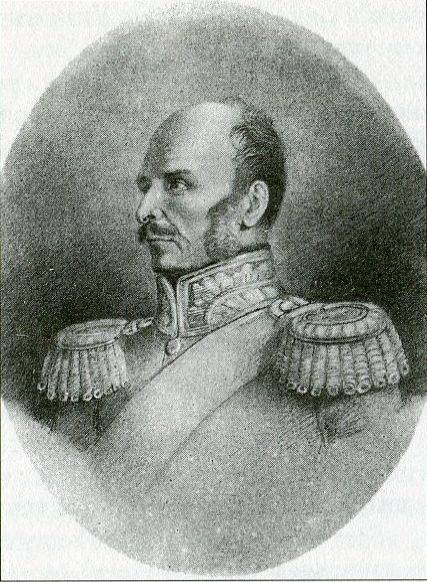 Brother, as you understand, Denis Vasilyevich, retired major general. But - cavalier guards. Which wearing a mustache was prohibited until 1832.

But what do you think? Found another Davydov! In general, this surname was very rich in military officers. Time was like that on the one hand, and people corresponded to it, on the other.

In 1954, a group of researchers (V. Vavra, G. Gabaev and V. Yakubov) of the work of O. Kiprensky made the assumption that the portrait depicts Evgraf Vladimirovich Davydov (1775-1823).

He participated in the campaign of 1807, in 1812 he commanded the Life Guards Hussar regiment, in the battle of Leipzig (1813) E.V. Davydov was wounded by a grenade fragment in his right leg and was wounded by a cannonball in the head, on the same day he was blown off by a cannonball right hand and left leg knee-deep). Received a personal pension from Emperor Alexander I of 6 thousand rubles a year.

Evgraf Davydov died in September 1823. This explains the fact that Davydov could not redeem his portrait.

Yes, the compiler of the catalog, Andrei Ivanovich Somov, could take wishful thinking. Or they could "hint" to him, as it usually happened in our country.

There are, of course, opponents of this opinion. There are several versions, from rather serious to frankly conspiracy theories. And quite authoritative persons took part in the expressions of opinion “against”, but I think that here are the opinions of the opposite side.

The list of colonels of the Life Guards Hussar Regiment has been preserved, and Denis Vasilyevich Davydov is not there. And Evgraf Vladimirovich Davydov is. And they are relatives, this explains the similarity in the portraits.

Some researchers were interested in the question why Evgraf Davydov did not buy his portrait. A variety of versions were also built on this.

Obviously, Evgraf Vladimirovich ... was just busy! He almost continuously participated in various campaigns along with his regiment, which was considered one of the best. And in 1813 Evgraf Davydov was not at all up to the portrait. Judging by the way he got it at the Battle of Leipzig.

By that time, Kiprensky had simply left Russia in 1816. And he lived in Europe. And pretty soon the original portrait passed away.

Actually, that's the whole story of Davydov's portrait. In general, it is not so important now, Denis, Evgraf, Evdokim. The Davydovs have long gone down in history as one of the most remarkable military names in Russia. But the fact that, as a result of the work done by art historians, one can say for sure who is depicted in the portrait is useful.

And the story turned out to be quite interesting.

Ctrl Enter
Noticed oshЫbku Highlight text and press. Ctrl + Enter
We are
Chernobyl notebook. Part of 3The hunt for the Blackbird
Military Reviewin Yandex News
Military Reviewin Google News
53 comments
Information
Dear reader, to leave comments on the publication, you must sign in.