The Great Eight vs. Bonnie and Clyde 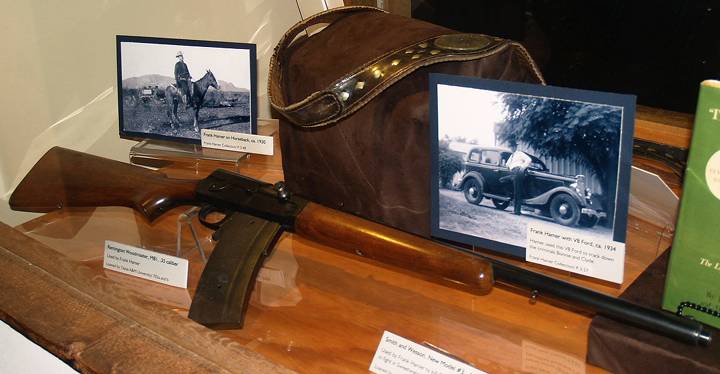 Miscellaneous weapon - different fates. It is possible that, had it not been in the hands of the hunters for Bonnie and Clyde M8, they might have gone out of the hands of the law this time too. And maybe they would have lived a little more. And they killed someone else ...
"... for with what judgment you judge, you will be judged."
(Matthew 7: 2)
Weapons and firms. Last time we told VO readers about the life and death of Bonnie and Clyde. Today, in continuation of this topic, there will be a story about what role the weapon created by John Browning played in their fate, namely his "Great Eight" or the M8 automatic rifle. 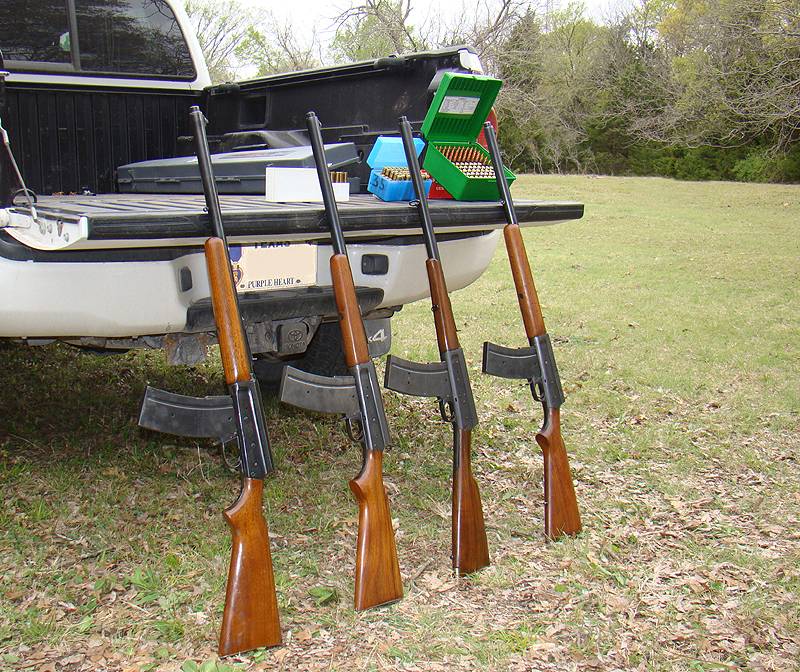 Here they are, M8 and M81 - of different caliber and release time
And it so happened that long before even the very concept of modern assault rifles appeared, a company from St. Joseph, Missouri, modified the Remington M-8 rifle to help law enforcement officers. They needed a weapon capable of giving them significant superiority over criminals. At that time, newspapers wrote a lot about the use of Thompson submachine guns by gangsters, and law enforcement officials themselves faced this. Therefore, in the 1930s, many government services and departments were simply forced to take up their weapons arsenal in order to have superiority in the event of a shootout with bandits. The Peace Officer Equipment Company also thought about it, which can be translated as "Equipment for peacekeepers", and presented a specially modified model of the M8 rifle, designed specifically for use by law enforcement agencies. While the M8 was not originally intended for military or police service, it turned out to be just perfect for extended gunfights. The "peacemaker" shooter could fire "fifteen crushing aimed shots - plus additional range, penetration and shock" without reloading, the advertisement for this enterprise said. The usual M8 rifle had a five-round magazine.

So, the designers from "Peace ..." put on it a replaceable magazine of three times the capacity, which made it possible to conduct a fairly long fire battle. Of course, the Thompson submachine gun had tremendous firepower, but ... its bullets had low penetrating power, and it was ridiculous to talk about the accuracy of its shooting. So the advantage of these new M8s, in addition to magazine capacity, was that they fired .35 Remington rounds. This cartridge fired a 9,1 mm caliber bullet and weighing 13 g at a speed of 635 m / s per second, which was more than enough to pierce through the steel bodies of the then cars.

If the recoil of this model seemed too strong to someone, then for this case there were rifles chambered for .30 Remington: 7,8 mm caliber. A bullet weighing 10 g had a speed of 647 m / s, which, by the way, also guaranteed it a fairly good armor penetration. Although it was noted that she showed all her good qualities (including a small tendency to ricochets) only at a distance of 150 m. But this was quite enough for the same police when she chased gangster cars. 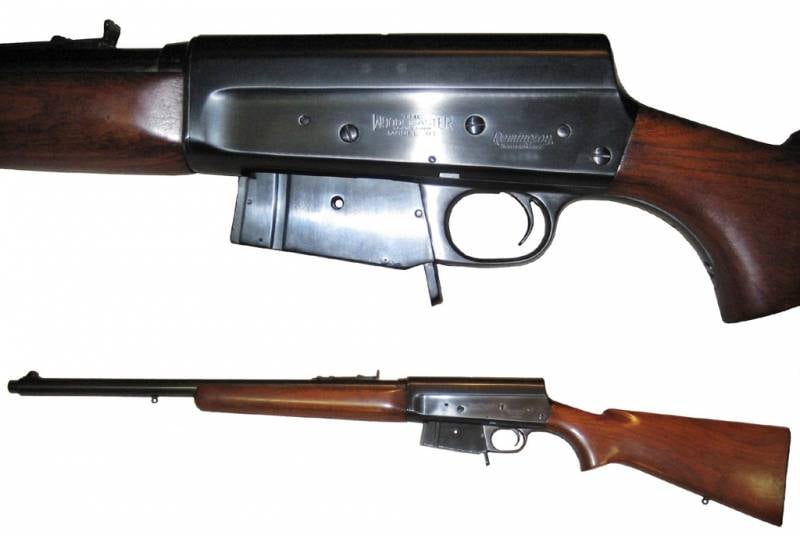 M8, appearance
The police models M8 and M81 might never have appeared had it not been for the insight of Newton S. Hillard, founder and president of the Hillyard Chemical Company in St. Joseph, Missouri. Moreover, he received about 50 patents before his death. By the way, his company, founded by him in 1907, continues to operate as a family business today. However, Newton was also fond of weapons and, being a very entrepreneurial person, in the 1920s he founded the Peace Officer Equipment Company. The company's main product was the Flash Commander, a car warning light that allowed police officers to identify each other in the dark. He also sold various items to law enforcement such as handcuffs, tear gas grenades, etc.

Back in 1929, Peace Officer Equipment Co. (or POE for short) was busy redesigning the Remington Model 8 so that it could use a replaceable multi-charge magazine. In addition, the firm ditched a factory-made forend in favor of a custom-made one that was longer and wider. A modified M8 model by Peace Officer Equipment Co. proved to be convenient and quickly gained popularity in and around Missouri.

The heart of these new rifles is the store. Whether in .30 Remington or .35 Remington calibers, the magazines were made of steel (including sidewalls, arcuate walls and end plate) and were highly durable. The slightly curved magazine had double guide ribs, one on each side, to keep the cartridges in a central position as they were fed into the chamber. Perhaps one of the most notable features of this store was that each had its own latch, built directly into the store itself. In other versions of removable magazines, such as the Krieger magazine, the latch was located in the trigger plate. 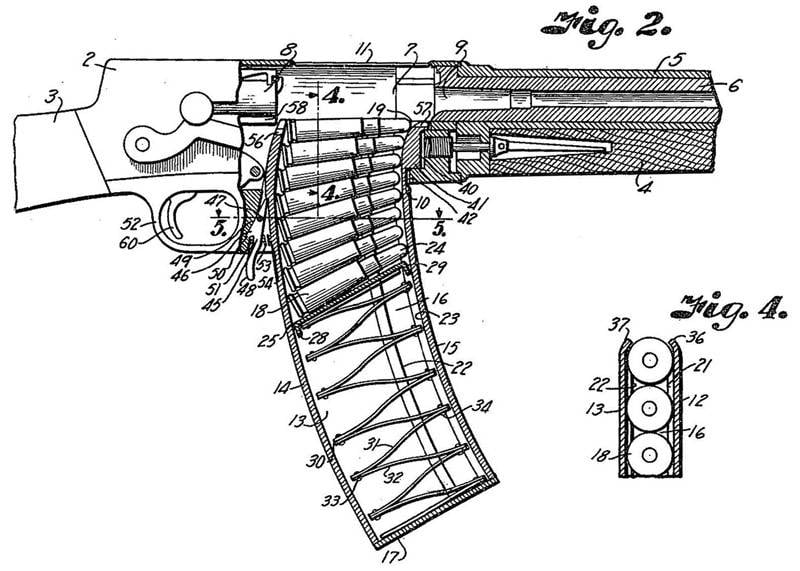 In 1934, the company held a demonstration of its weapons in a pasture in Kirksville, where the chief of the local police, the sheriff, the chief of the city fire department and the banker, whose bank had recently been robbed by armed bandits, were invited. The rifle was represented by NS Hillard himself, the owner and director of the company.

“Look, gentlemen,” he said, “how easy it is to hit the target with our rifle. Take a look at the destructive effect of her bullets on the engine block of this car (a car from a junkyard was specially brought for this demonstration), and you will appreciate its undoubted advantage when chasing a gangster car or a criminal wearing a bulletproof vest. Look, our police rifle is about to hit a half dollar target in the air. "
After that, Hillard asked for half a dollar, but since no one responded to his request, he took out a coin from his own pocket, his assistant threw it into the air, a shot rang out and ... she fell, shot through and through, right at the feet of the excited spectators. The banker, faithful to his profession, was the first to grab this coin and put it in his pocket. After that, the rifles began to sell very well. And especially after Hillard also proved to the head of the local police that they would shoot even at 30 degrees below zero. During his demonstration, he then fired at cans of tomato juice, which exploded into clouds of frozen red dust. 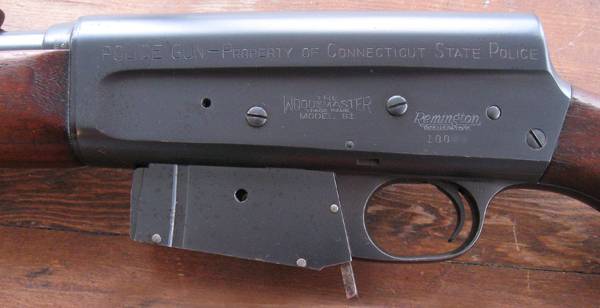 Receiver М81
In recognition of the exceptional firepower of the POE's M8, Remington also wanted a piece of police pie. In 1938, the company began production of a modified rifle, called the "Special Police", intended specifically for sale to law enforcement agencies. The M11 and M31 shotguns were also included in this lineup, and after working with POE, the Model 81 was also included.

The M81 "especially for the police" rifle, like its predecessor, the M8, was excellent for close range work. With a 15-round magazine, the policeman no longer had to worry about slow reloading or lack of firepower over armed Thompson gangsters. The main market for the "special police" were law enforcement agencies.

But at the outbreak of World War II, the Remington Company offered it to arm the National Guard. Such rifles in the hands of trained shooters, in her opinion, could come in handy, for example, in the fight against paratroopers. They could be destroyed with a semi-automatic in a short time of their release, while a soldier with a bolt action rifle would waste precious seconds to reload after each shot ”(Chicago Daily Tribune, May 6, 1940). 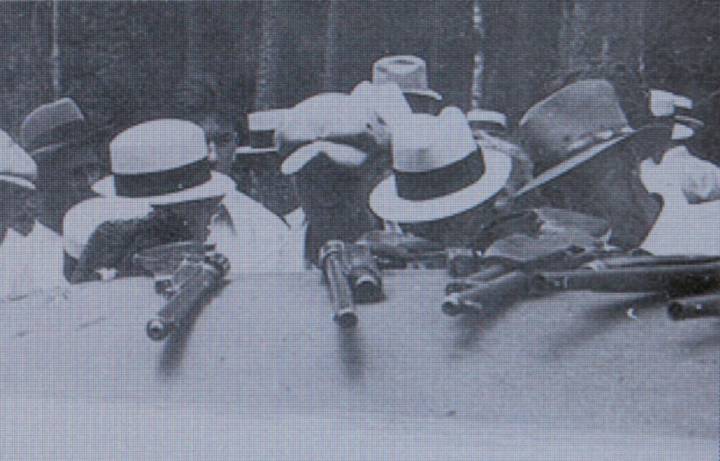 And finally, the most important thing: it was from the police model M8 that Bonnie and Clyde were killed.

In the 1968 documentary film The Other Side of Bonnie and Clyde by Larry Buchanan, Frank Hamer Jr., son of Frank Hamer, one of the participants in the ambush on a country road in Bienville, was interviewed and talked about the weapons his father was then using. It was an M8 rifle with a 15-round magazine. Although Hamer Jr. said in this interview that he was 20, they just weren’t released! 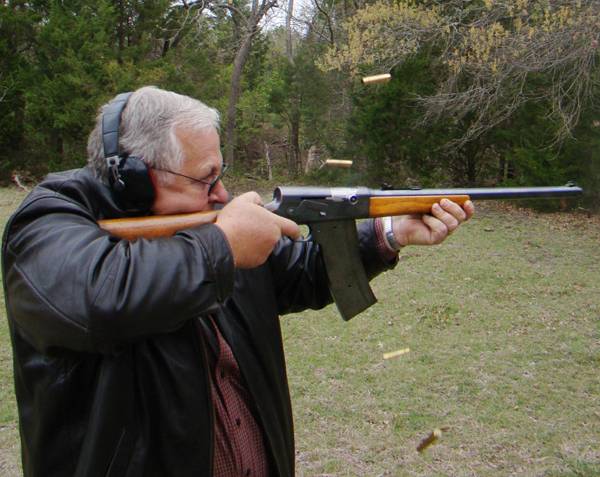 And this is how they shoot from the M8 today
At first he wanted to take the Thompson. And took. But, having fired from him at the car in the junkyard, I realized that his Ford V8 bullets would not pierce. And then he took the 9mm Remington M8. And he succeeded in everything with him! So in stories In the fight against banditry in the United States, this Browning weapon has played a very special role!

The author and the site administration would like to thank Cameron Woodall for the permission to use his materials.