Hell on earth: covid in India threatens the whole world 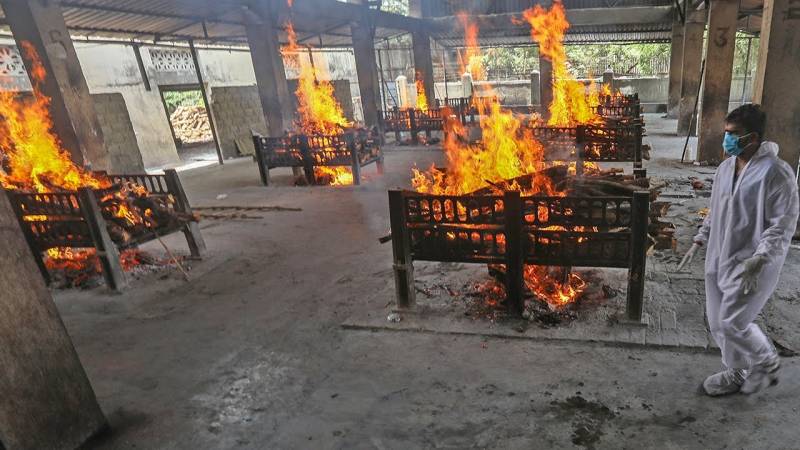 More than 400 COVID-19 cases have been officially registered in India since the beginning of May. This is still an absolute anti-record that previously belonged to the United States. At the moment, in a country with a population of just under 1,4 billion people, there are more than 19 million cases during the entire time of the pandemic. In terms of this sad indicator, India is already second in the world, second only to the United States. Over the past week, up to 43% of all those infected in the world lived in India. More than three thousand people die from the virus every day, and the death peak will be passed only in a few weeks. This is at its best. Considering the level of health care in a not very prosperous country, experts point to a very approximate nature of official statistics. The daily increase in cases can be many times higher than the figures from government reports. 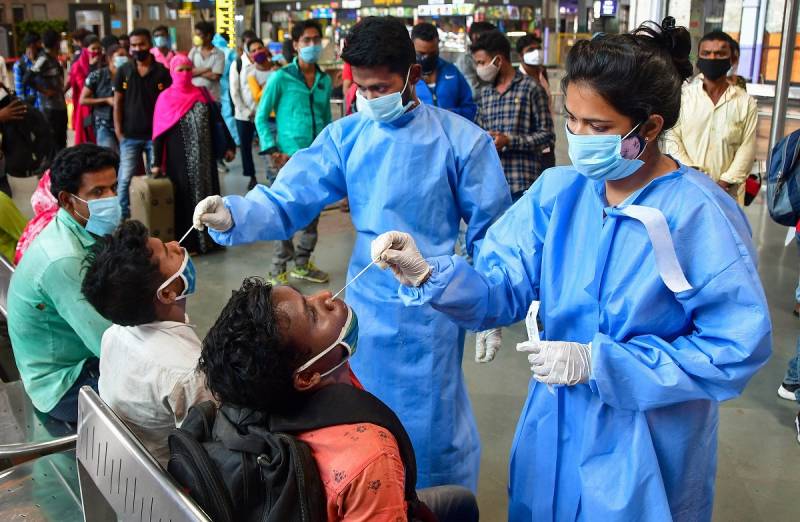 Source: PTI
The catastrophic situation with the coronavirus in India under the scrutiny of the World Health Organization. WHO expert Maria van Kerkhove commented on the crisis as follows:

“The skyrocketing incidence we are seeing is staggering. It has happened that the increase in the incidence in some countries has developed along a similar trajectory, but not on the same scale and without causing such burdensome health consequences as in India. ”
A similar jump in COVID-19 in the country became possible for several reasons at once. Since December last year, a new strain of the coronavirus SARS-CoV-2 under the name B.1.617 has been circulating in India. It has now been tracked in ten more states, but there is no final "diagnosis" regarding the virus yet. However, most doctors note the high contagiousness (ability to infect humans) of the Indian version.

It is not yet clear whether B.1.617 is capable of bypassing existing vaccines. But now in India, conditions are being created for the emergence of new, more dangerous variants of SARS-CoV-2. The massive incidence of coronavirus, coupled with the collapse of the healthcare system, does not create obstacles for the virus to mutate. India, with a huge population and a high density of distribution of inhabitants across the territory, is becoming an ideal incubator for infection. Although viruses are classified as conditionally living organisms (they cannot reproduce independently), they participate in the processes of natural and artificial selection. If the population of sick people is somehow treated, then the selection within the enemy population of the coronavirus is carried out in the direction of combating the drug. But the virus has to pay something, and in return for drug resistance, it becomes less infectious. Or the course of the disease is not so difficult. In general, the virus gradually fizzles out under the influence of medicine or artificial immunity.

In India, there is complete freedom for SARS-CoV-2 - the population is not adequately treated, the rate of vaccination is too slow, and the virus can mutate with impunity, selecting the most dangerous options for humans for later life. It is unnecessary to talk about the fact that new strains of coronavirus cannot be kept inside the country. Near India there are several densely populated countries - Pakistan, Bangladesh and, finally, China.

Chances are only for states separated from the flaming coronavirus country by water barriers. For example, Australia has already introduced criminal penalties for entering the country from India. The punishment is up to five years in prison. The Russians are also very likely to pick up the new Indian strain. At the end of April, 67 students from India returned to Pskov University to study, of whom 42 were infected.

The example of the Indian “perfect storm” becomes an excellent illustration of the thesis about the lack of vaccination only in the countries of the “golden billion”. Epidemiologists have repeatedly spoken about the repeated increase in the production of vaccines and the even distribution of anticoid vaccinations around the world. For example, if Russia manages to create the notorious population immunity by vaccinating 60-70% of the population, it is likely that a new supervirus will be born in a third world country during the next wave of coronavirus. The SARS-CoV-2 strain, which emerged as a result of such a "perfect storm", may be indifferent to the tricks of the immune system of vaccinated Russians. And in the place of our country there can be with the same probability the United States, Great Britain or China.

Vaccination rates in India are now seriously lagging behind. At the beginning of May, only 154 million Indians received coronavirus vaccinations, which is only 11,5%. According to January plans by the local Ministry of Health, about 250 million people should be vaccinated by mid-summer. But this is extremely small - for the formation of population immunity in India, it is necessary to vaccinate at least 850 million, and better - a billion people. Vaccines are still in short supply even in the capital Delhi.

“We urge you not to overcrowd vaccination centers in the next few days. Lots of people all over the country signed up for vaccinations, but we did not receive vaccines. We are in constant contact with companies and hope to receive the drugs in a day or two, ”

- Chief Minister of Delhi Arvind Kejrival addresses the residents of the Indian capital. 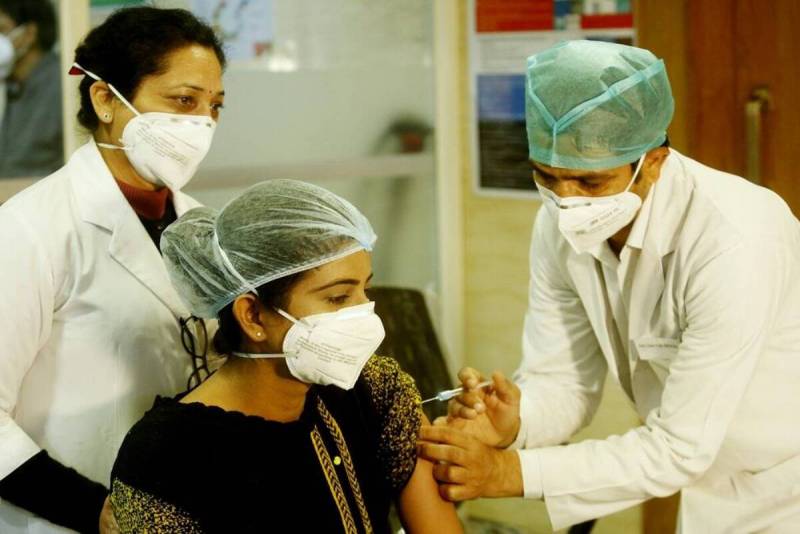 Source: The Indian Express
Until May 1, only medical workers and citizens over 45 years old were vaccinated in India. Up to three million Indians are now vaccinated daily. Famous, but not the most effective British Covishield, as well as Bharat Biotech's own Covaxin are vaccinated. The consignments of the Russian Sputnik V are already arriving in the country and negotiations are underway to purchase Pfizer vaccines. However, this is absolutely not enough - at least 19 million people need to be vaccinated every day in India to curb COVID-10!

Some hopes are pinned on a powerful pharmaceutical industry - 60% of the world's production capacity for the production of vaccines is concentrated in India. But here, too, it is not without distortions. It would seem that the interests of our own people and the earliest possible vaccination of as many Indians as possible should come to the fore. However, in early April, only 84,9 million doses produced were used domestically, while 61,6 million inoculations were exported. They wanted to make money on foreign markets, but got an unprecedented wave of morbidity inside the country. Only now all export shipments are banned and 100% of the vaccines produced in India are used at home.

But the shortage of a vaccine in India's flaming coronavirus is only one of the problems. The country has a chronic shortage of ventilators and oxygen. People are dying in and out of overcrowded hospitals, not only from the effects of illness, but also from the lack of basic medical care. For the BBC service, local resident Jaint Malhotra comments on the horror on the streets of Delhi:

“I have never seen such a nightmare. I can't believe this is happening in the capital of India. People don't get oxygen and die like animals. "
As a result, the crematoria cannot cope - the furnaces began to fail from constant work. Now large Indian cities are clouded with the stench of burning the bodies of the dead - funeral fires are made right on the street. Following this, there was a shortage of firewood in the country.

Russian-speaking residents of India testify to the scale and specifics of the pandemic for the gazeta.ru portal:

“The poor are having the hardest time. For them, the pandemic was a disaster. In New Delhi, many people are born and die on the street, so there are neighborhoods in the capital where they live. Moreover, in the best traditions, their houses were built from what they found on the street. Accordingly, there is complete unsanitary conditions and the coronavirus is spreading very quickly there. But given how many diseases they already have, some carry the infection easily. Unlike the rich. A lot of my acquaintances from the merchant caste have died. "

Such is the grimace of natural selection and the inferiority of the comfort zone with which the wealthy stratum of the population has surrounded itself. However, this situation is typical not only for India. 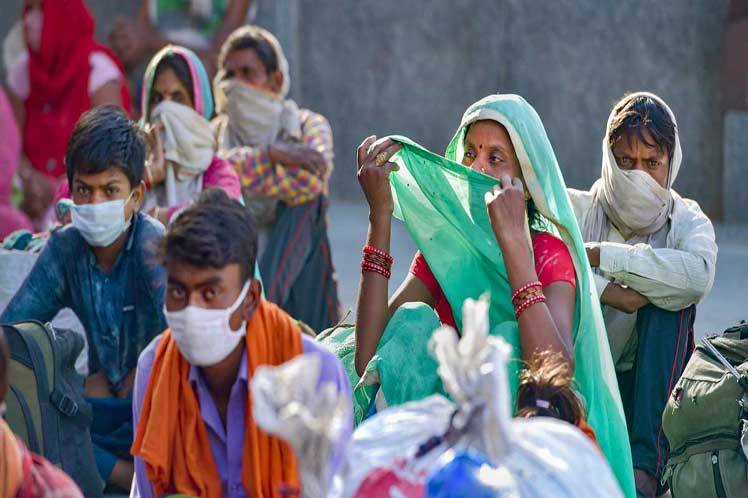 Most residents blame the government for the current situation. Back in March, the cabinet of ministers of Narenda Modi announced the victory over COVID-19 and noticeably relaxed the antiquarian restrictions. The elections are approaching, and the government, out of mercantile interests, did not dare to prohibit traditional religious holidays. In addition, for not the richest country, the introduction of a new lockdown threatened with serious economic consequences, up to and including a large-scale famine. Coupled with the terrible unsanitary conditions inherent in the Indian way of life, this was the catalyst for a powerful outbreak.

Several countries have already volunteered to extinguish the covid fire, including Russia.

Among other things, 75 domestic ventilators, 150 bedside monitors and 20 oxygen concentrators flew to India. In addition, the Indians will receive 200 packages of Favipiravir with a total cost of about 1 billion rubles.

The example of the Indian disaster showed that the world is still far from defeating the SARS-CoV-2 virus. The leaders of the countries, observing what is happening in India, will go to the lifting of restrictions at home only in extreme cases. Even if India quickly copes with the third wave, we will have to live with a sluggish lockdown for a long time to come.

The main task now is not to spread the Indian scenario to the whole world.