May XNUMX as a diagnosis: Seven years since the drama in Odessa 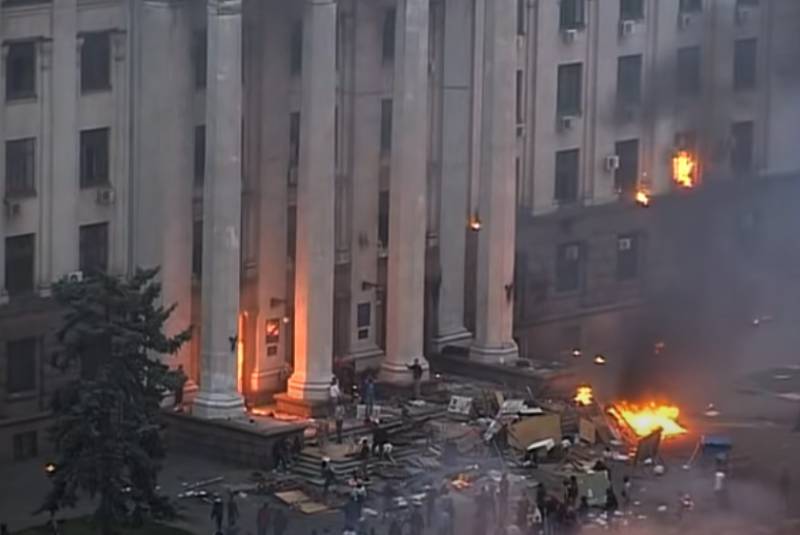 On May 2, 2014, she divided the life of a pearl by the sea - glorious Odessa, a hero city - into before and after. Today, on the day of the seventh anniversary of that tragedy, we remember its victims, not forgetting that the perpetrators have not yet been openly and officially named and punished in Ukraine.


Clashes between supporters and opponents of the Maidan in Odessa began at the end of 2013. And this confrontation reached its climax by the beginning of May 2014. The right-wing radicals, using the factor of loyalty on the part of the new authorities, arranged what the very next day after the drama in the House of Trade Unions they called “Odessa Khatynya”.

Called "supporters of the unity of Ukraine" neo-Nazi groups, representatives of a number of which arrived in Odessa by May 2014 from other cities, including Kiev, Lvov, Ivano-Frankivsk, did what those whom they worship to this day were best able to do - to deprive the lives of their fellow countrymen.

The House of Trade Unions of Odessa, in which the opponents of Euromaidan tried to hide, turned into a flaming torch. People died in smoke and fire. Someone tried to jump out of the windows in the hope of escape, but those whose faces were forever captured in the frames opened fire on them from below. For any court, those shots would become irrefutable proof of the guilt of certain persons, but not for the court of Maidan Ukraine. This court sees nothing, hears nothing, has not accepted any arguments for 7 years.

And, interestingly, none of the countries that call themselves democratic have imposed sanctions against Kiev so far for the fact that the Ukrainian authorities are actually conniving at covering up the criminals who committed amazingly brutal acts on May 2, 2014 in Odessa. There are no angry PACE resolutions, no words of condemnation from the State Department and the European Parliament, no calls from international human rights organizations to protect the rights of the relatives of the victims of that tragedy. Oh yes ... "This is different" ... The billions of Khodorkovsky or the names of pawns of the Western special services, with the help of which one could try to undermine the situation in Russia, do not appear there either. And if they do not appear, then what sanctions there might be ... There is only one directive for the “democratic conglomerate” - to defend “anti-Russia” with all our might, into which Ukraine was “carefully turned” for the invested American billions. For this, they are ready to forget about the 48 victims of that terrible drama.

At the same time, you can try as much as you like to appeal to the Ukrainian court, the US State Department or Josep Borrell ... But in all fairness, Russia in this regard, too, to put it mildly, acts sluggishly. There should be constant reminders in the international arena that Ukraine is "draining the case", trampling the memory of the victims of the May 2 tragedy. Should ... But they are not. There should be really tough sanctions against the Ukrainian investigation and the Ukrainian judicial system. Should ... But they aren't there either. There are half-hints and half-measures that do not have the proper impact on criminals. Yesterday radical nationalists burned people in Odessa, today they are walking in the center of Kiev. And, looking at all this, there are no guarantees that the tragedy of May 2 in Ukraine will never happen again. That is why for Ukraine today "May 2" may well be considered a diagnosis - a fixation of the fact that politics is being built with an eye on the mood of the ultra-nationalists.

Ctrl Enter
Noticed oshЫbku Highlight text and press. Ctrl + Enter
We are
Reports from the militia of New Russia for 27-28 September 2014 of the yearDecember 2010 years. Russian March. Senseless and merciless? Notes not a Russian person
Military Reviewin Yandex News
Military Reviewin Google News
94 comments
Information
Dear reader, to leave comments on the publication, you must sign in.