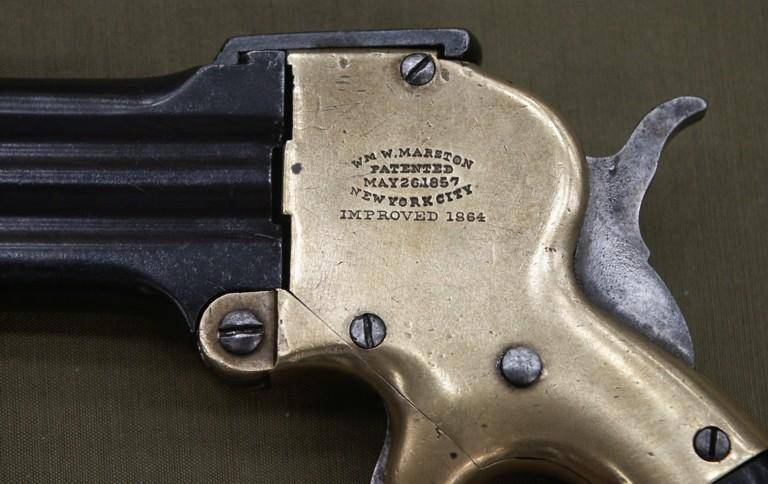 Three-barreled and three-shot pistol "Marston", released in the USA in 1864, caliber .22. The rarest of the Marstons. Only about 300 pieces were made. The barrels located one above the other are tilted down for loading. Factory engraved brass frame and walnut handle

“The revolver, thrown by Dunya and flying off to the door, suddenly caught his eye. He picked it up and examined it. It was a small, pocket-sized three-hit revolver, an old device; it still has two charges and one primer. You could shoot once. He thought, put the revolver in his pocket, took his hat and left. "
"Crime and Punishment". Fedor Dostoevsky
History firearms weapons. An interesting design is described in the novel by Dostoevsky - a three-stroke revolver (!) For three primers, and therefore for three barrels. And what? So, there were such or is it an invention of the author? No, there were such "revolvers", only it would be more correct to call this weapon a pistol, because the main feature of a revolver was a rotating drum, and there was only one barrel. 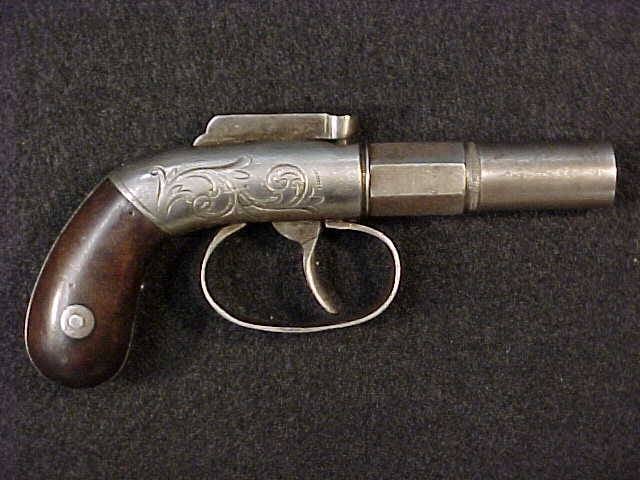 Ethan Allen pistol, circa 1835, .28 caliber: Allen's patent; engraved frame; Walnut grip with oval "German middle" overlays. Manufacturing: Grafton, Massachusetts. Photo courtesy of Alain Daubresse
In the previous article dedicated to the "Queen Anne pistols", we have already talked about the appearance of this specific weapon. But ... how did it develop afterwards? Today we will just talk about this, and, of course, look at certain samples of pistols "for the pocket." 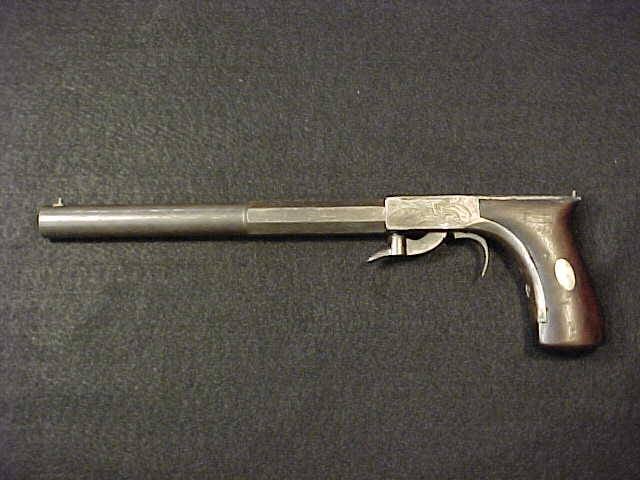 Another interesting example of a pistol from the Ethan Allen company. Photo courtesy of Alain Daubresse
To begin with, after the invention of capsule caps, pocket pistols simply experienced a rebirth, and their popularity increased even more. The fact is that due to the design and operation of the flintlock, its trigger had to protrude quite significantly above the box-shaped receiver and, accordingly, could easily catch on the lining of the pocket.

The capsule lock did not have such a drawback. Its trigger could easily be made self-cocking and worn with a primer put on the brand tube. In this form, and even with a folded trigger, such a pistol had a "streamlined shape". There was simply nothing to cling to the lining of the pockets, and if so, since such a convenient and "modern" weapon appeared, why not buy it? 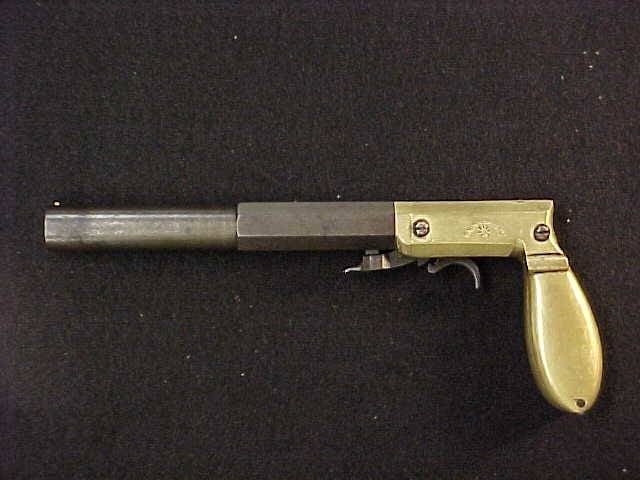 Single-shot pistol with a lower trigger position. By B. Bosworth, Warren, Rhode Island, circa 1850s Caliber .31 caliber, barrel length 8 inches, part octagonal, part round, with brass front sight. The brass frame of the pistol has a steel trigger and trigger. Photo courtesy of Alain Daubresse
However, the capsule literally untied the designers' hands, so that, through their efforts, completely unusual samples began to appear not with the upper, but with the lower location of the brand tube and, accordingly, the trigger hitting it. The barrel was also unscrewed with a special wrench, which allowed the bullet to be inserted into the barrel "with an emphasis" and provided the pistol with a strong fight.

Long barrel - the fight is stronger and the accuracy of the fire is higher. This is how "long-barreled pocket pistols" appeared, which also had the location of the trigger and the hose from the bottom, which was convenient, since there was simply nothing to hook such a pistol to the lining.

Interestingly, some of these pistols received the original shape of the handle, most of all similar to the handle of a cane. By the way, they were often combined with a cane. Conveniently, of course ... You walk so-so, leaning on the "stick" late in the evening, exercising before going to bed, and on you - r-a-az, and the robber attacks. And you - take a pistol out of a cane and - bang at close range, and there is no robber, and you calmly go for a walk on! However, there were also special shooting canes, a very original device, and we will also tell you about them someday! 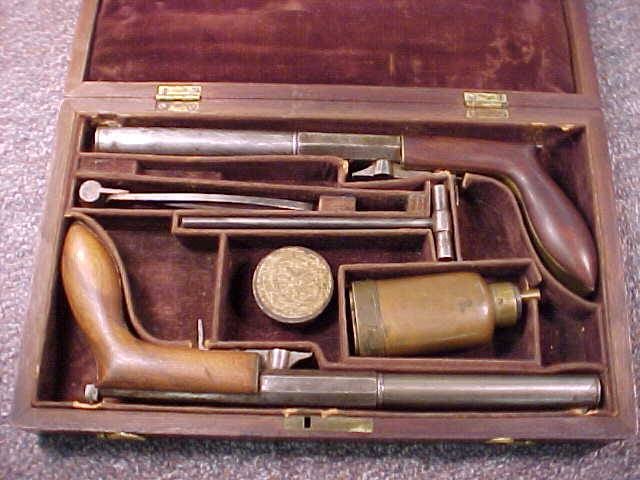 Hale even began to produce headsets from two of these pistols, with a full set of accessories. Moreover, if desired, they could serve as dueling ones - why not? Mahogany body with brass carrying handle, lock and two latches; brown velvet liner, combined copper / brass powder flask, bullet, ramrod and shock capsule tin. Photo courtesy of Alain Daubresse 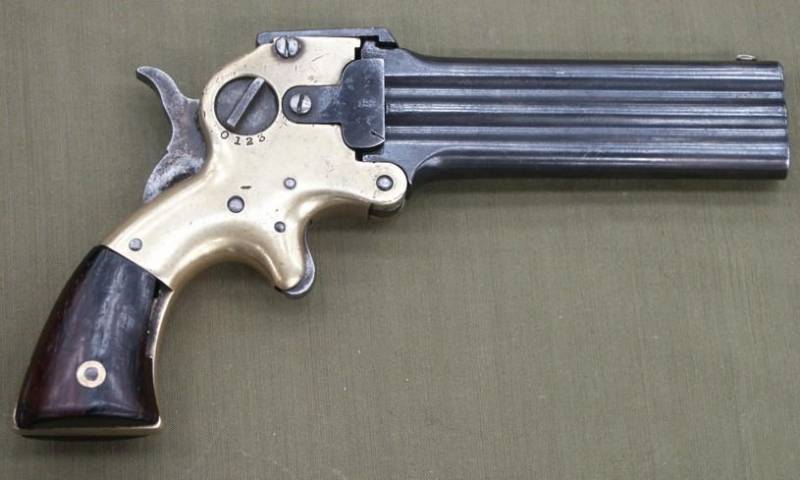 Well, as always, as soon as single-shot pistols of this type appeared, gunsmith designers took care of the creation of multiple-shot weapons. In particular, the American company Marston has created a three-barreled and three-shot pistol with a rotary toggle switch, by turning the trigger against the corresponding .22 caliber cartridge. Photo courtesy of Alain Daubresse 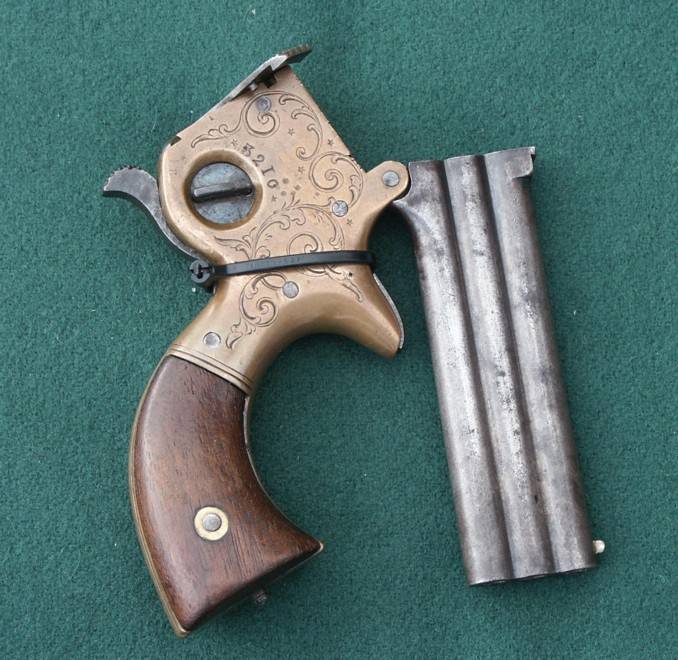 The barrel block was locked with a swivel top plate. Photo courtesy of Alain Daubresse 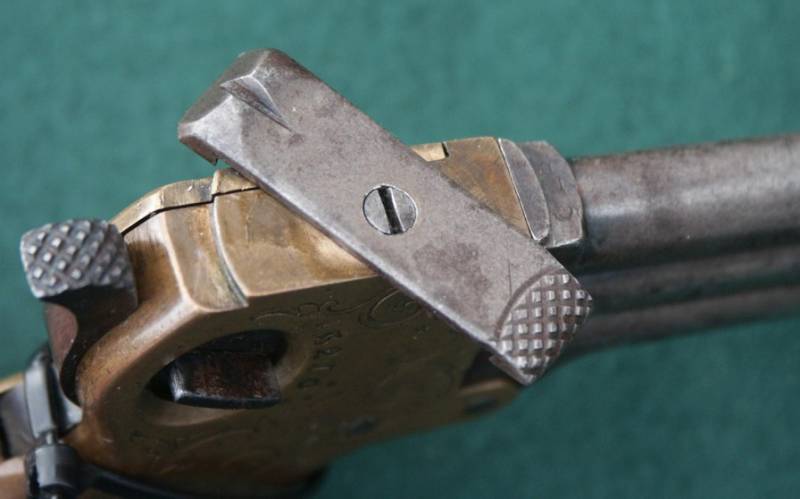 The plate turned, and the barrels for loading were folded down. Photo courtesy of Alain Daubresse 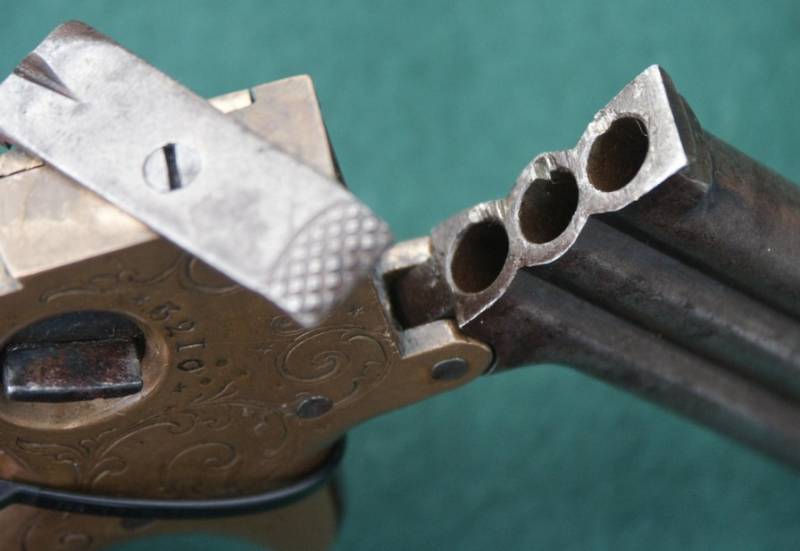 The plate turned and the barrels were folded down for loading. Photo courtesy of Alain Daubresse 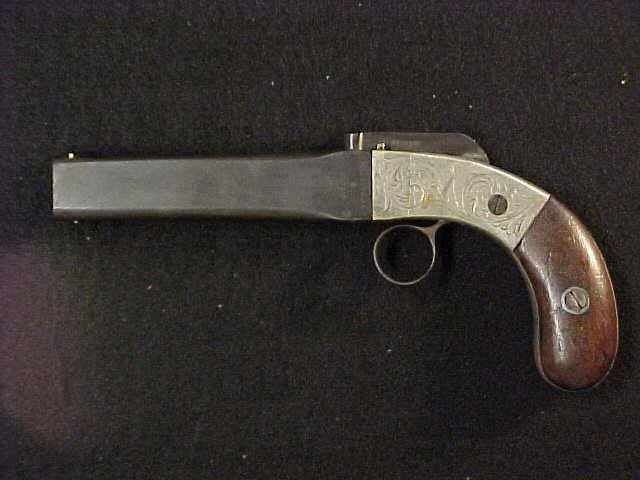 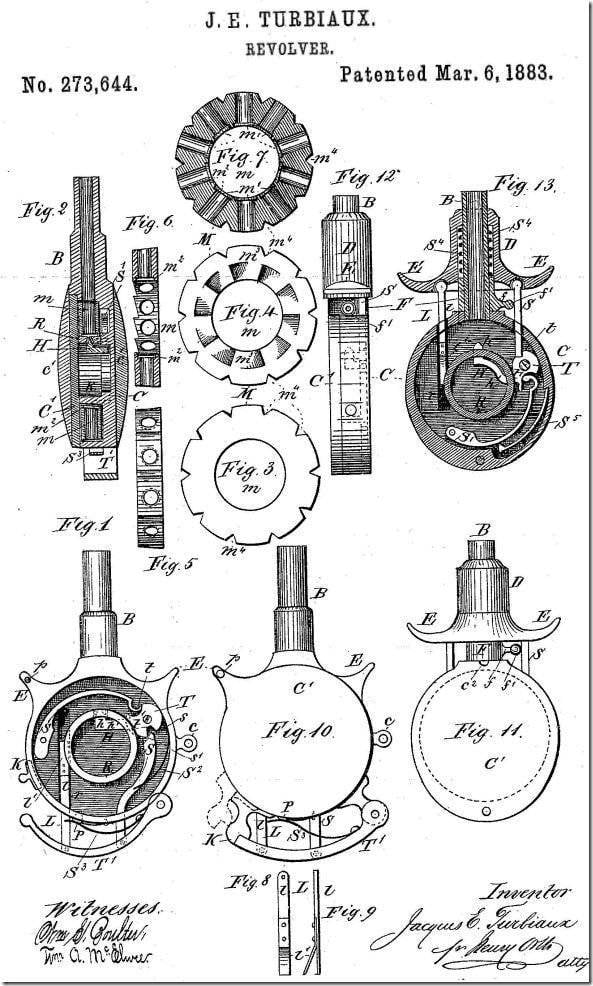 "Protector" - US patent
The device resembled a wrist expander. The disc with the barrel contained another disc-magazine with a radial arrangement of cartridges. The trigger was inside this disk-store, and as soon as the shooter squeezed the spring of the firing device with the back of his hand, he hit the cartridge primer. That is, by acting with a brush and squeezing and unclenching the spring, it was possible to quickly empty the entire store, while the barrel itself passed between the fingers. 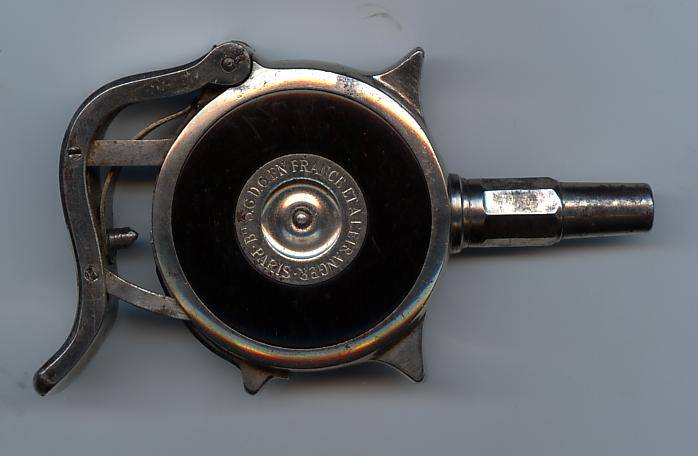 The original model of the French "Protector". Photo courtesy of Alain Daubresse
The pistol was produced in France until the mid-90s of the XIX century, in 1892 the license for its production was bought by the Americans. Due to legal disputes that arose, the American Protectors were produced in very small numbers. American-made pistols were called Chicago Palm Pistol or Chicago Palm Protector. 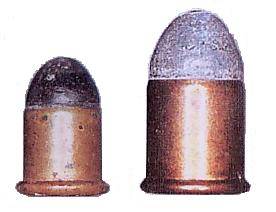 Cartridges 6 and 8 mm for "Protector". Photo courtesy of Alain Daubresse
The French versions came in two calibers: 6 and 8 mm, with 40 mm barrels for the smaller caliber and 45 for the larger. Accordingly, the first model had a magazine for 10 rounds, and the second for 7. 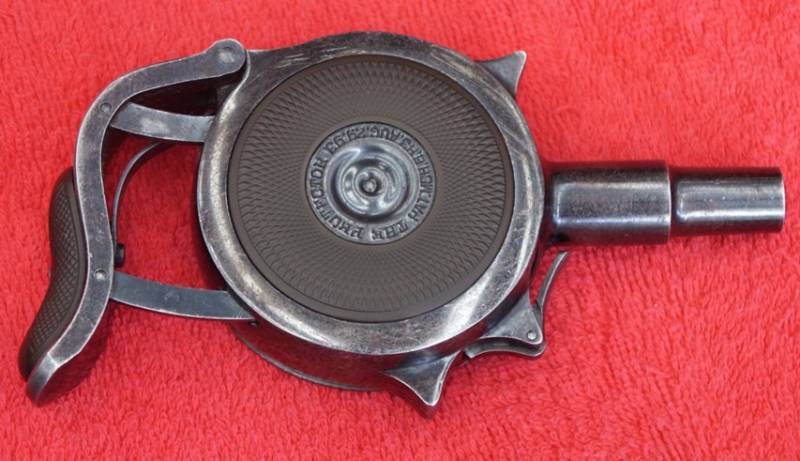 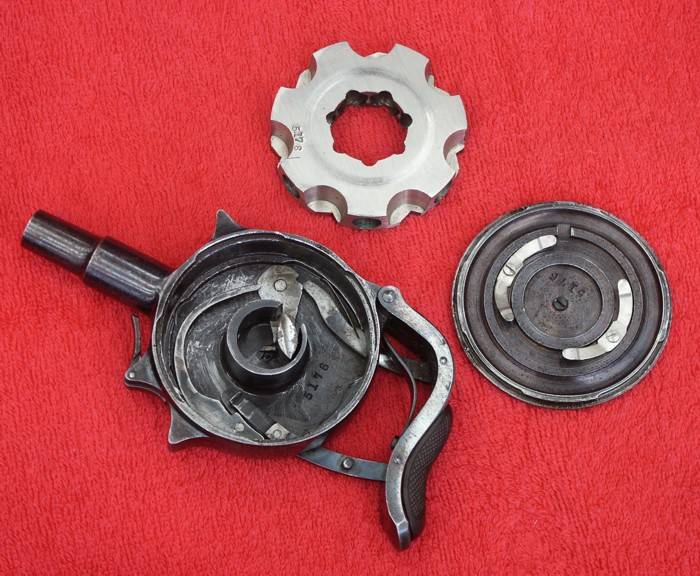 Her device. Photo courtesy of Alain Daubresse
Pocket in the middle of the XNUMXth century were not only pistols, but also revolvers. For example, they included the Massachusetts Arms Company revolvers, which were a pocket version of the Wesson & Levitt revolver. 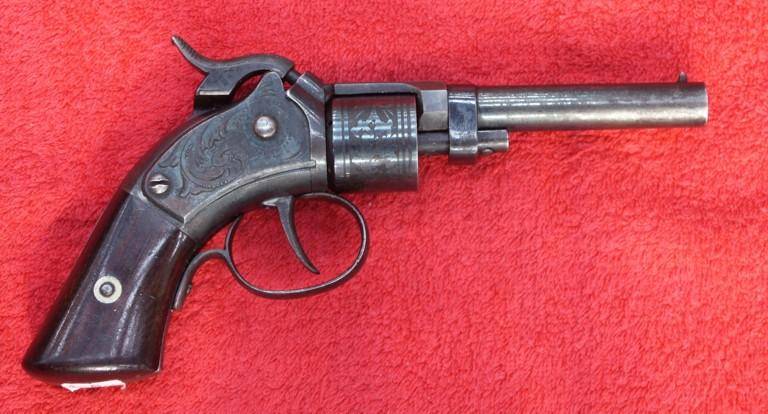 Revolver "Massachusetts Arms Company" 1850-1851 release. About 1000 samples of .31 caliber with a 6-charge drum were produced. Photo courtesy of Alain Daubresse

Same model, but with mother-of-pearl grip. Photo courtesy of Alain Daubresse
To simplify the revolver as much as possible and make it as small as possible, its creators decided not to use primers for ignition, but used the original system according to Maynard's patent, in which a piston tape was used to ignite the charges in the drum, similar to the tape for children's toy pistols, but, of course , incomparably higher power.

The revolver was very easy to disassemble ... Photo courtesy of Alain Daubresse
The tape with the capsules was laid in a slot on the body of the revolver and fed to the hose by pressing the trigger. Accordingly, the drum, turning, stood against it with a hole through which the flame from the capsule reached the charge. The trigger guard was gilded, the grip cheeks were mother-of-pearl. 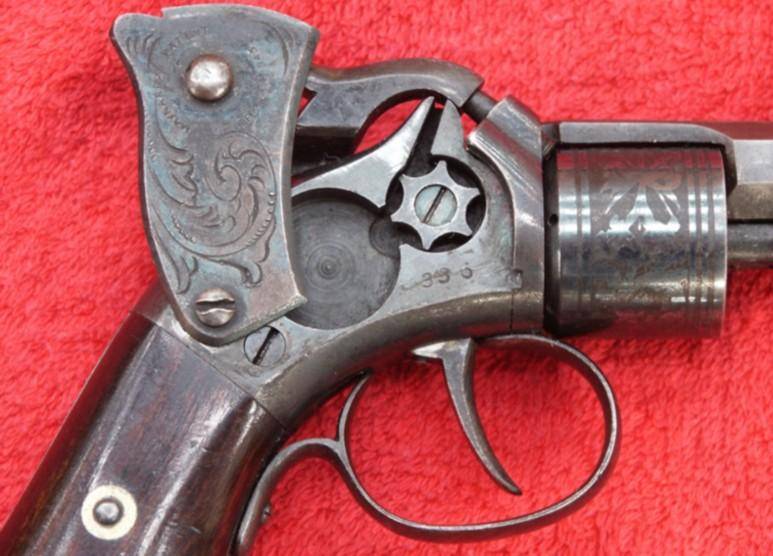 Mainard's "store" device. Photo courtesy of Alain Daubresse
However, larger models of this revolver were also produced. But they were capsule. The mechanism is the same, self-cocking. 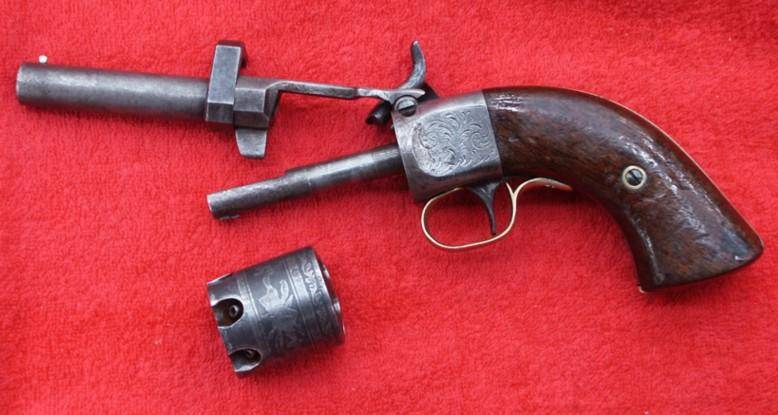 That's how he figured it out ... Photo courtesy of Alain Daubresse 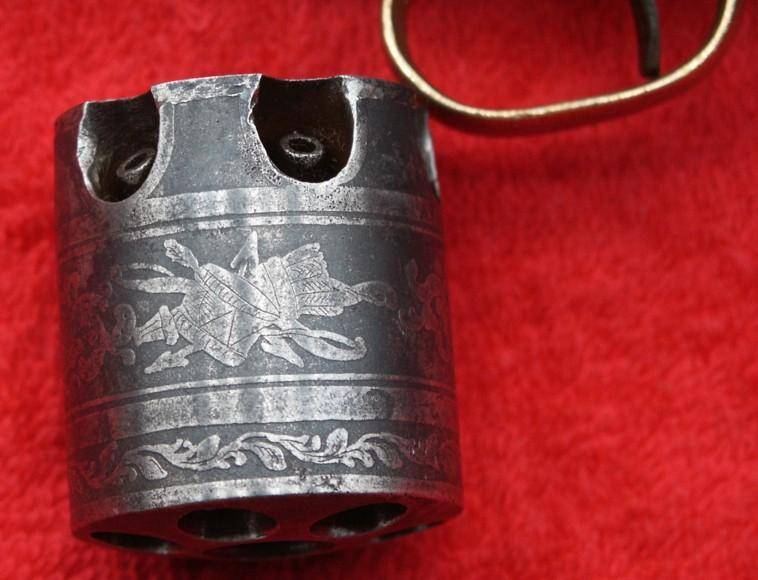 And this is his drum. Already with capsule sockets. Photo courtesy of Alain Daubresse
As you can see, those who wanted at that time to shove a pistol in their pockets or carry it in a lady's muff had a rich selection of the most varied models ... "pocket weapons".